After an on-and-off-turned-whirlwind romance, Justin Bieber and Hailey Baldwin got legally married in September 2018. A little more than a year later on Sept. 30, 2019, the young couple had a second wedding — a religious ceremony before a large group of friends and family at a chapel at a South Carolina resort. To celebrate, Wonderwall.com is taking a look back at how this young couple came to be. Keep reading to find out how Justin and Hailey's love blossomed…

Justin Bieber and Hailey Baldwin were photographed together for the first time at the Biebs' "Never Say Never" premiere in 2011 when he was 16 and Hailey was 14. The teens were joined by Hailey's dad, actor Stephen Baldwin. At the time, Hailey was a huge fan of the pop star, often tweeting him and stanning for his singles, performances and his then-relationship with Selena Gomez. "I don't care what anyone says but Justin Bieber and Selena Gomez together is the definition of a teenage dream," she tweeted in September 2011. How things have changed!

RELATED: Celebs who got engaged more than once: See all their rings

Three years later, Justin Bieber and Hailey Baldwin were often spotted together around town. The pair were seen grabbing food, attending parties and spending time with one another at Hillsong Church's New York City location. Nevertheless, the duo denied a romantic relationship. "I've known him since I was so young — since I was like 13 — and we've just been good friends over the years," Hailey told E! News in December 2014. "We have just stayed close and there's nothing more to it than that." Justin echoed her statements on Instagram, posting a photo of the two with the caption: "People are crazy. I'm super single and this is my good friend u would know otherwise."

Justin Bieber and Hailey Baldwin continued to spend time together, even ringing in the New Year side by side. "Spending New Years w/ this guy," Hailey captioned a selfie with Justin on Dec. 31, 2014.

Just a few months later, Hailey Baldwin helped Justin Bieber celebrate his 21st birthday on March 1, 2015. The blonde beauty posted a photo of herself and JB, writing a simple birthday message to her rumored boo: "21."

Justin Bieber and Hailey Baldwin took a tropical vacation to Miami together in June 2015 but continued to claim that they were "just friends." "He's just going through a time in his life where he's transitioning in a really positive way and he needs good people around him," Hailey told E! News. "And I'm trying to be a good friend and be there for him and support him."

Justin Bieber and Hailey Baldwin brought in New Year's Eve 2015 together, leading to even more speculation. Just two days later, their romance was officially confirmed when Justin posted this captionless Instagram photo of himself kissing the model.

Justin Bieber reflected on his relationship with Hailey Baldwin during an interview with GQ in February 2016. The singer shared that Hailey was "someone I really love. We spend a lot of time together." He continued to gush about their future together, saying, "I already have a lot that I have to commit to. A lot of responsibilities. I don't want to feel like the girl I love is an added responsibility. What if Hailey ends up being the girl I'm gonna marry, right? If I rush into anything, if I damage her, then it's always gonna be damaged." He added, "It's really hard to fix wounds like that. It's so hard… I just don't want to hurt her."

By August 2016, Justin Bieber and Hailey Baldwin had called it quits. The pair unfollowed each other on Instagram and Justin quickly moved on with another teen model, Sofia Richie. "We've all had our fair share of things we've done, both good and bad. What makes the present so powerful is when we take complete responsibility for our actions, we allow ourselves self-growth," Hailey wrote on Twitter at the time. "Misplacing the blame onto someone else isn't going to get you to the next stage in life, so try not to manipulate a situation to make yourself look better. The truth always come to light, so it's better just to own it." Justin went on to again date his former on-again, off-again love Selena Gomez in late 2017 while Hailey was linked to Cameron Dallas and Shawn Mendes.

Nearly two years after their split, Hailey Baldwin opened up about her breakup with Justin Bieber just before rumors that they might have rekindled their romance began to swirl. "We didn't speak for quite some time and there was a lot of weirdness that went on," she told Britain's The Times in May 2018. "But it brought both of us to the realization that we just work much better as friends. He's somebody I really cherish. Now it's a very mature situation. It's good."

Hailey Baldwin and Justin Bieber put romance rumors in overdrive in early June 2018 when she was photographed toweling him off in Miami and getting close to him at a nightclub. While the pair claimed to — once again — be just friends, they were caught making on on video in New York City just a few days after this photo of them walking around Manhattan was taken, making it clear there was more to the story.

Just a few weeks later in early July 2018, Justin Bieber and Hailey Baldwin were snapped enjoying a getaway together in the Hamptons. Still, the private couple refused to publicly acknowledge their romantic relationship.

Justin Bieber and Hailey Baldwin's romance was finally confirmed when the superstar singer popped the question at a resort in the Bahamas about a month after they got back together! He proposed with an enormous diamond ring at a restaurant on July 7, 2018, after asking the other patrons to put their phones away. Justin's dad posted a photo of his son and a congratulatory message on Instagram, writing "@justinbieber proud is an understatement! Excited for the next chapter!"

Justin Bieber commissioned a $500K, 6-to-10 carat diamond engagement sparkler from private New York City jeweler Solow & Co. "In the end, Justin wanted something that would gracefully accentuate Hailey's beautifully shaped hands. We settled on an oval stone that was just exceptional in its length and grace," founder Jack Solow told People magazine. Jack also shared that Justin gave the ring "a lot of thought" and was over the moon when he found the right one. "He seemed really excited. He was looking inside the diamond with the loop, and said, 'I think I see Hailey's face.'"

Justin Bieber addressed his engagement for the first time on July 9, 2018, in a lengthy, love-filled Instagram post. He shared a photo of the two embracing, writing to Hailey: "Was gonna wait a while to say anything but word travels fast, listen plain and simple Hailey I am soooo in love with everything about you! So committed to spending my life getting to know every single part of you loving you patiently and kindLY. I promise to lead our family with honor and integrity letting Jesus through his Holy Spirit guide us in everything we do and every decision we make. My heart is COMPLETELY and FULLY YOURS and I will ALWAYS put you first! You are the love of my life Hailey Baldwin and I wouldn't want to spend it with anybody else. You make me so much better and we compliment each other so well!! Can't wait for the best season of life yet!. It's funny because now with you everything seems to make sense! The thing I am most excited for is that my little brother and sister get to see another healthy stable marriage and look for the same!!! Gods timing really is literally perfect, we got engaged on the seventh day of the seventh month, the number seven is the number of spiritual perfection, it's true GOOGLE IT! Isn't that nuts? By the way I didn't plan that, anyways My goodness does feel good to have our future secured! WERE GONNA BE BETTER AT 70 BABY HERE WE GO! "He who finds a wife finds a good thing and obtains FAVOR from the Lord!" This is the year of favor!!!!"

After getting engaged, Justin Bieber and Hailey Baldwin were frequently spotted attending religious services together at the Hillsong Church in New York City. In this photo, the couple were snapped heading into services on July 29, 2018. Justin shared the importance of his born-again Christianity in a message posted to Twitter, writing "Jesus has changed my life…I am set free from bondage and shame, I am a child of the most high God and he loves me exactly where I am, how I am, for who I am."

On Sept. 13, 2018, Hailey Baldwin and Justin Bieber were spotted walking into a marriage license bureau at a New York City courthouse, leading to speculation that the pair had either married or obtained a marriage license. Reports from outlets including People magazine claimed that the couple had legally tied the knot, and a source told E! News they planned to have "a separate ceremony out of the country with a few family members soon as well." But the very next day, Hailey denied the union, tweeting "I understand where the speculation is coming from, but I'm not married yet!"

That tweet was soon deleted, however, and Hailey Baldwin and Justin Bieber's marriage was confirmed by Hailey's uncle, Alec Baldwin, on the 2018 Emmys red carpet, though doubts persisted. Then on Oct. 2, TMZ backed up People's original report, confirming that the couple had a legally binding ceremony — and did it without a prenup in place. Even though the newlyweds were legally wed, Justin waited to rock a wedding band — it was said that he wanted to have a religious ceremony first, which, sources told TMZ, is when both Justin and Hailey will actually consider themselves to be really and truly married. 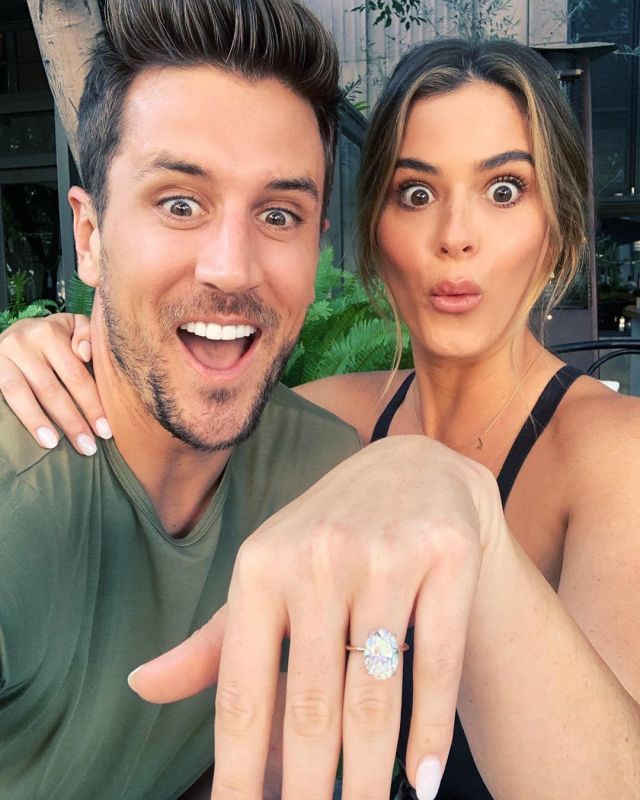 Eva Longoria steps out in orange culottes and a sheer corset top as the Cannes Film Festival kicks off, plus more great celebrity photos this week