Wonderwall.com is rounding up the biggest celebrity romance news for early October 2020, starting with this surprising revelation… Nicole Kidman, who rarely talks about her first husband, opened up to The New York Times Magazine in an article published on Oct. 5 about her marriage to Tom Cruise — particularly whether or not their co-starring in the film "Eyes Wide Shut" might have impacted their relationship. "We were happily married through that," she said of shooting troubling scenes about their characters' infidelity-plagued on-screen marriage in the 1999 film. She added: "We would go go-kart racing after those scenes. We'd rent out a place and go racing at 3 in the morning. I don't know what else to say. Maybe I don't have the ability to look back and dissect it. Or I'm not willing to." She also spoke about her and Tom's relationship with their director, the late Stanley Kubrick. "We loved working with him. We shot that for two years. We had two kids and were living in a trailer on the lot primarily, making spaghetti because Stanley liked to eat with us sometimes," Nicole recalled. "We were working with the greatest filmmaker and learning about our lives and enjoying our lives on set." Tom left Nicole in 2001 after 10 years of marriage.

We never saw this coming! Page Six reported that in celebrity gossip blogger Perez Hilton's new memoir "TMI: My Life in Scandal," which came out on Oct. 6, he reveals he once made out with John Mayer. Yep, he claims it went down back in 2007 and that John was the instigator. According to Perez (real name: Mario Lavandeira Jr.), he and Christina Aguilera met up with the Grammy winner and then-girlfriend Jessica Simpson after co-hosting MTV's New Year's Eve celebrations. John brought up that he liked to watch gay adult entertainment films and mentioned his favorite actor. Things then moved quickly, Perez recalled, as John leaned in and kissed him — they started making out — leading to a very confused reaction from Jessica, who "didn't seem to know whether she was incredibly embarrassed or really turned on," Perez explained.

Chrissy Metz is off the market! On Oct. 3, the "This Is Us" star took to Instagram to rave about her beau, Bradley Collins. "Happy #nationalboyfriendday to my dreamboat! Bradley, from the first moment I laid eyes on you I wanted and needed to know you," Chrissy began her post. The couple, who have been dating since May, met in Nashville, where Chrissy spent most of coronavirus quarantine before heading back to Los Angeles in August to resume filming her hit show.

Despite canceling their Italian nuptials due to the pandemic, Stassi Schroeder and Beau Clark still found a way to tie the knot. Though they were originally meant to marry abroad, from the looks of the video the former "Vanderpump Rules" star posted on Instagram on Oct. 7, they wed in a super-casual ceremony in Los Angeles. She captioned the post, "Today would've been our wedding day. We went and did it anyway." She also specified the duo were "married sept 2020" and added "hopefully Italian dream wedding oct 2021." The former reality star announced she was pregnant in June — the same month she was fired from her Bravo series. She and her new husband are due to welcome a little girl in January 2021.

Cassie Randolph got her temporary restraining order against ex Colton Underwood extended this week. The former "The Bachelor" couple's attorneys attended a hearing on Oct. 6 where both said that Colton and Cassie are trying to work out their problems amicably ahead of a Nov. 6 hearing. On top of the restraining order being extended, TMZ reported that Cassie had recently filed a police report addressing a tracking device Colton allegedly put on her car. The couple split in May 2020 after dating for a year and a half.

It looks like actress Torrey DeVitto has a new love in her life — actor Will Estes. She posted a black-and-white selfie with her rumored beau on Oct. 6, captioning it, "2020 Accessory…Mask on ear so as not to forget it when leaving the house. #wearamask." The two certainly look cozy in the snap, and Will seemed to confirm the romance by posting a photo with Torrey on his own social media earlier that day.

Reba McEntire has a new man… and he might look familiar! The country superstar opened up about her new squeeze, "CSI: Miami" star Rex Linn, on her "Living and Learning" podcast. She described him as "special" and called him "a very, very sweetheart of a guy" whom she went on a first date with back in January. The two built a relationship during the coronavirus pandemic by talking, texting and FaceTiming. For his part, Rex shared a picture of the two looking cozy on a date night on Instagram back in January.

Still going strong! Tim McGraw made a public declaration of love for wife Faith Hill on their 24th wedding anniversary, sharing a video tribute to his partner and fellow country singer on Oct. 6. He included a sweet caption, part of which read: "My oxygen only exists if you're by my side. Forever and always living and loving our way through anything @faithhill." Faith kept things a little shorter, but her caption was equally heartfelt. "To my guy…The one that stole my heart 24 years ago today. Happy Anniversary my love," she wrote on Instagram. The two married back in 1996 and have three daughters together, Gracie, Maggie and Audrey.

Here's some surprising "Selling Sunset" news. Fan favorite Amanza Smith revealed on the "Not Skinny But Not Fat" podcast on Oct. 6 that she has a very famous ex — Taye Diggs. The reality star shared that she dated the actor for five years and that he supported her and her two children during their time together. She also touched on her relationship with the father of her children, daughter Noah and son Braker, former NFL star Ralph Brown. On the show, she was open about the fact that he disappeared from his children's lives last year, and Amanza provided an update on his status on the podcast. "I'm positive that he's alive and I know that he's alive… at one point he submitted something to the courts where he did a change of address and we trace it back but it's a P.O. box," she shared, adding, "…he's off the grid… he doesn't want to be found right now."

Willow Smith may or may not be in a relationship! The young star sparked romance rumors when she brought musician Tyler Cole onto her show, "Red Table Talk," which she hosts with mom Jada Pinkett Smith and grandma Adrienne Banfield Norris. On the Oct. 6 episode, Tyler chatted with Willow, her family, Ice Cube, Van Jones and Brandon Marshall about topics like voting, police reform and representation. The pair's appearance on the series furthered speculation that they're an item. Willow and Tyler released an album together earlier this year called "The Anxiety" and have been present on each other's social media for years, where Tyler has posted effusive birthday messages for Willow since 2018.

Amidst speculation that their marriage is on the rocks, "The Real Housewives of Orange County" star Braunwyn Windham-Burke posted a vague caption on social media with hubby Sean Burke on Oct. 4. She shared a photo of herself and her husband getting close in a pool, adding the caption, "modern marriage." The couple, who have been married since 2000 and have seven children together, have been under a microscope following Braunwyn's decision to promote a co-parenting and divorce Zoom workshop on her Instagram last month. Following the steamy post, Braunwyn also shared photos of them vacationing in Puerto Rico, seemingly putting an end to the split rumors.

The second season of the American version of "Love Island" concluded on Sept. 30 with Justine Ndiba and Caleb Corprew taking the top prize after stealing America's hearts. Since leaving the villa, things are still going well for the happy couple, who live across the country from one another (Caleb in California, Justine in New Jersey). Justine took to her Instagram Stories to assure fans, "Caleb and I are great!" She added, "My favorite part right now is just like talking to him on the phone." They became the first Black couple to win across the show's franchises. Of that milestone, Caleb told People magazine, "It is awesome to see that America got behind our love and it came during a very important time, so I'm glad that people were able to support us despite anything else that may be going on in the world."

Toni Garrn is a married woman! The model wed actor Alex Pettyfer on Oct. 2 in her hometown of Hamburg, Germany. The couple, who started dating in February 2019, got engaged on Christmas Eve last year. Both have famous exes: Alex was previously engaged to actress Riley Keough and model Marloes Horst. Toni has previously been linked to actors Leonardo DiCaprio, Alexander Skarsgard and Chandler Parsons.

It's a match made in country music heaven for Jameson Rodgers and Sarah Allison Turner, singers who got engaged at the famous Bluebird Cafe in Nashville on Sept. 30. Jameson shared the happy news on his social media on Oct. 1. The couple have been together for five years, and before the coronavirus pandemic hit, they had been scheduled to tour together — with Sarah opening for Jameson on the "Grew Up in the Country" tour.

Former "The Real Housewives of Orange County" star Jim Edmonds declared his love for new girlfriend Kortnie O'Connor on social media on Oct. 5. Jim shared a sentimental post in honor of her birthday, calling her "the most amazing, strong, courageous, loving, selfless, caring, daring person I have ever met." He added, "It's like you came along and turned the light on in my heart again. Something that I didn't think was going to be possible again." The couple have been together since April 2020 — six months after his split from former "RHOC" star Meghan King.

Former "The Bachelor" contestant Taylor Nolan opened up about her new love on her podcast, "Let's Talk About It With Taylor Nolan," this week. The former reality star has been showing glimpses of her new man on social media and while chatting with fellow Bachelor Nation member Vanessa Grimaldi on her show, she revealed, "My preference of style of relationship is monogam-ish, to be consensually nonmonogramous." Her unique take apparently has the approval of new man Zach, whom she notes is a "vegan" who "doesn't drink," "likes cats" and is "interested in poly/open relationships."

Things continue to heat up for Brooklyn Beckham and Nicola Peltz. The 21-year-old photographer debuted a new tattoo on Instagram of a set of eyes on his neck… which many think are those of his fiancée. That permanent show of love is a sweet gesture to his future wife, whom he proposed to in July after dating for a little under a year. 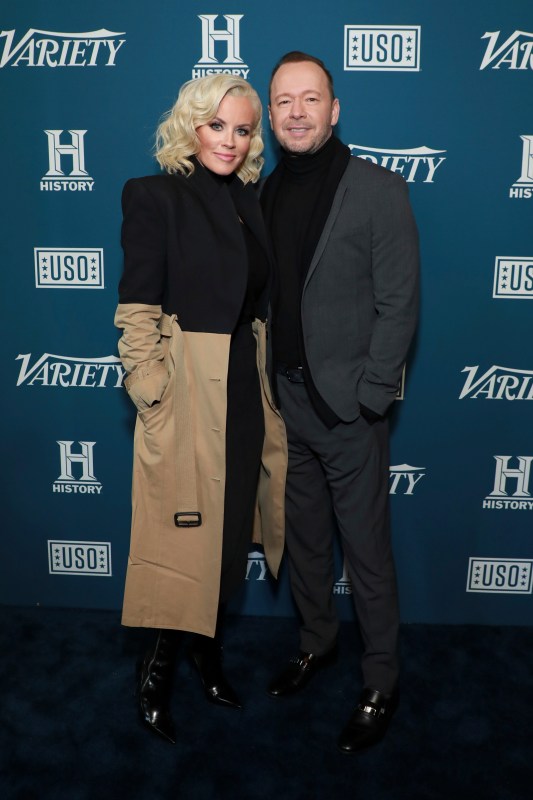