It's been a wild couple of romance rumor weeks for Katy Perry and Orlando Bloom. On Nov. 22, In Touch reported that they'd split, but then that rumor was debunked when the two spent the Thanksgiving holiday together. Fueling the rumor mill even more, "Entertainment Tonight" reported that they might actually be engaged when it ran photos of Katy wearing an enormous yellow diamond ring on that finger while out with Orlando in New York City on Nov. 28. However, the ring was gone when Katy accepted the humanitarian award from Hillary Clinton at UNICEF's annual Snowflake Ball the next night. So are they breaking up or are they walking down the aisle? E! reports that Katy praised Orlando before she accepted her humanitarian award. "It's so funny: He was the previous award recipient," she told E! News. "He's just got the most kind heart ever." It sounds like these two are still very much in love… and that we'll have to wait for more on the significance of her new bling! But Katy and Orlando aren't the only celeb couple making news this week. Wonderwall.com is bringing you all the latest rumors, breakups and marriage updates, so keep reading for more!

Are Brad Pitt and Kate Hudson dating? According to Australian tabloid Woman's Day, "Kate is Brad's mystery woman" and they have "been extremely close over the past few weeks, following several secret meet-ups." The report also quoted Brad and ex Angelina Jolie's former bodyguard, Kris Herzog, saying he knows both Kate and Brad and wouldn't be surprised "at all if they were dating." But another source dismissed the claims to the Daily Mail, insisting that this story is false.

Dating has been difficult for Michelle Williams. She told the new issue of Porter magazine, "Talk about a learning process… I feel really sensitive about it and certainly did not expect to still be dating at 36 with an 11-year-old. This is not what I imagined." She added, "My friend Busy [Phillips] and her husband Marc [Silverstein] said, 'Michelle, you're in like a blackout zone, everybody is now partnered up and you have to wait for people to start getting divorced.'" Michelle gave a big "no!" to the notion that she's "just sitting around and waiting for marriages to crumble." She explained, "I'm like a cat, I'm a very domestic creature. I just want to stay home and take care of people. But I'm also happy with myself and just because I might have a desire to be with someone… that won't lead me to marry the wrong person."

Hilary Duff and celebrity trainer Jason Walsh have called it quits. A source confirmed the breakup to Gossip Cop on Nov. 30. Hilary and Jason's relationship status was only confirmed in September 2016, and one month later, they made things Instagram official before jetting to Mexico in November for a hard-bodied beach getaway. But it just wasn't meant to be.

Joe Jonas and Sophie Turner appear to be getting more serious! Us Weekly reported that the pop star and the "Game of Thrones" actress attended a wedding together in Malibu over Thanksgiving weekend.

After headlines declared they'd split in October 2016, Katie Holmes and Jamie Foxx are reportedly back together — though still on the down-low. On Nov. 20, Page Six reported that "insiders say the pair have reconciled and have been together as recently as this week."

In the wake of her broken engagement to Australian billionaire James Packer, the romance rumors about Mariah Carey and hunky backup dancer Bryan Tanaka are continuing! A week after the pair held hands at a party thrown by Airbnb, they were spotted at the Grand Wailea Resort on Maui. "They were all over each other, making out and not wanting to be more than a few feet apart," an onlooker told Us Weekly. "They swam in the ocean and he picked her up to kiss her. She was jumping into his arms, and he bent her back over his knee like they were dancing. Then they walked on the beach holding hands, and he gave her a piggyback ride. They had a lot of fun together and were very playful. She was kicking up the water to splash him, and he was laughing. She seemed very happy and comfortable with Bryan." Photos of the pair smooching on the beach emerged on Nov. 30.

"Dancing with the Stars" pro Mark Ballas and singer-songwriter BC Jean tied the knot in front of 160 guests on Nov. 25 at Calamigos Ranch in Malibu. Fellow "DWTS" pro Derek Hough served as Mark's best man. The bride stunned in an embroidered white gown by designer Idan Cohen and a jeweled headpiece by Marianna Harutunian.

Naya Rivera and her husband of more than two years, actor Ryan Dorsey, announced their split on Nov. 21. In her divorce filing, Naya asked for custody of their 1-year-old son, Josey, with visitation for Ryan.

Chris Buckner proposed to "Jersey Shore" alum Deena Cortese on Nov. 18. She shared the good news during their five-year anniversary vacation in Mexico. "I always knew I would spend the rest of my life with Christopher … But last night while we were walking on the Beach in Mexico he made it official!! We're engaged!!!!!" Deena wrote on Instagram alongside a photo collage that showed off her engagement ring.

Marc Anthony and Shannon De Lima have called it quits after two years of marriage. The news came on Nov. 18, just one day after Marc shared a kiss with ex-wife Jennifer Lopez on stage at the Latin Grammys. At the awards ceremony, Marc was not wearing his wedding ring. Though reports were quick to claim the kiss was platonic, it turns out it might not have been so innocent for Marc. On Nov. 30, Us Weekly reported that Marc is "still in love" with J.Lo, claims a source, and "is trying to get back together with her." Though his marriage to Shannon was already on the rocks, an insider told Us that "as soon as he heard Jennifer split with Casper [Smart], he wanted out."

Surprise! Cheryl Cole is reportedly pregnant with Liam Payne's baby. Although no official announcement was made, Cheryl's bump gave it away when she stepped out for a date night with Liam at a charity event at the Fayre of St James's Church in London. The Sun reported, "Once inside, the pair stared adoringly at each other as if they were the only people in the room."

"Gotham" stars Morena Baccarin and Ben McKenzie are engaged! Us Weekly exclusively revealed the news on Nov. 29. If you look closely at this photo, you'll see Morena — who gave birth to their daughter, Frances, in March — showed off her new diamond ring at the 2016 Gotham Independent Film Awards in New York City on Nov. 28.

NFL star Odell Beckham Jr. and Zendaya are fueling romance rumors once more. They were spotted together at a New York Knicks game on Nov. 28. Zendaya documented the night through Snapchat and showed that her mom was there too. "Who is he again?" Zendaya joked. "Why he got the same hair color as my mom though?"

On Nov. 30, the world learned that "Vanderpump Rules" star Scheana Marie Shay filed for divorce from Mike Shay after two years of marriage. The news comes just three weeks after it was reported that he went "missing" and drained their checking account. In a statement to Us Weekly, the couple said, "While we have made the difficult decision to move forward separately, our story will continue on through the love and mutual respect that we have cultivated throughout our 15-year friendship. Much of the recent speculation and reporting on our relationship has been misguided, and we have come to an amicable decision on all matters. We might have failed at our marriage, but we are committed to succeeding as friends and will continue to support each other's personal happiness and professional success."

Gerard Butler is single again! The Scottish hunk and interior designer Morgan Brown started dating in 2014. On Nov. 29, the New York Post reported that the two had split. And there's an interesting reason! "Girls throw themselves at him," a source told the Post. "It's hard for him to constantly say, 'No. Get away from me. I have a girlfriend.'"

Grant Kemp and Lace Morris met and got engaged on "Bachelor in Paradise" in the summer of 2016, but it wasn't meant to be: News of their split broke on Nov. 28. "It really was mutual," Lace told "Entertainment Tonight." "We both have our issues we need to work on, and we can't really give each other what we need at this time. It's just not the right timing. We have so much love for each other, and it's weird because the chemistry is there, and I'm thinking, "Why can't we make this work?' But it's just not possible right now." 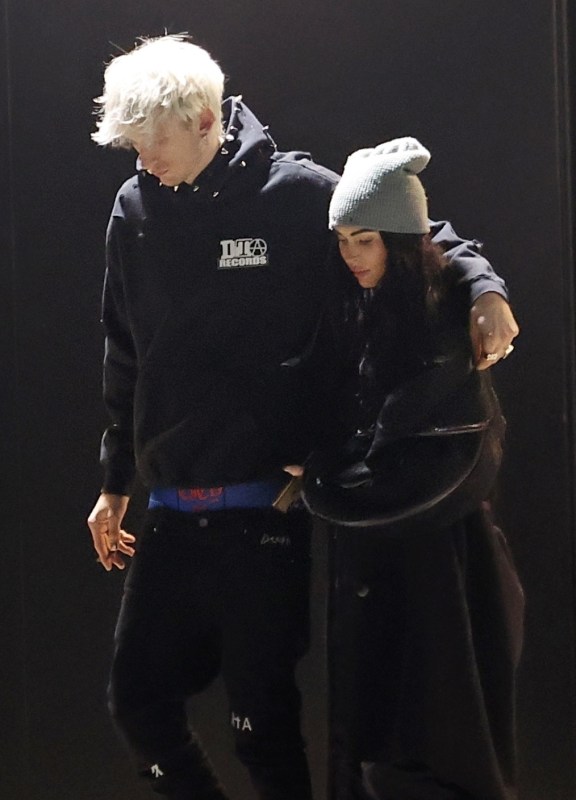