If Kanye West is serious about becoming the next president of the United States, he'll probably need to turn up the juice on his campaign. A new poll released on July 9 from polling and market research firm Redfield & Wilton Strategies (via The Fader) shows the rapper and designer coming in at just 2 percent in a national poll of 2,000 voters. While that doesn't look great on paper compared to Donald Trump's 40 percent and Joe Biden's lead at 48 percent, it's not far off from where other third-party candidates landed in the same poll. Libertarian Jo Jorgensen polled at 2 percent and Green Party candidate Howie Hawkins came in at 1 percent. The research firm also broke down how Kanye affects the race when he is or is not a candidate. And though he told Forbes in his now viral interview he'd be satisfied if his independent bid hurt Biden and helped Trump — "to say that the Black vote is Democratic is a form of racism and white supremacy," 'Ye asserted — that's not how things worked out with this poll. Rather, adding Kanye to the mix knocked Trump's polling number from 40 percent (without Kanye as an option) to 39 percent (with). Biden, meanwhile, hangs onto his 48 percent whether Kanye's involved or not. The rapper is said to have taken "early steps" last week to get on the ballot "in Florida and other states," according to New York Magazine.

Zac Efron's new travel and wellness show "Down To Earth" hit Netflix on Friday, sparking an audible buzz from fans about his surprsingly easy-on-the-eyes lumberjack-esque look. He was still sporting the more relaxed, facial hair-forward vibe when he was spotted in Los Angeles in January, but we're starting to think it's less about the show than his apparent interest in bailing on Hollywood for a while — if not longer — because it's simply not good for his health. In the fourth episode of "Down To Earth," Zac, 32, and his wellness guru sidekick Darin Olien head to Sardinia, Italy, to investigate some of the secrets to longevity, which residents of the island seem to have mastered. "I've learned so much here, including that the secret to a long, healthy life is not just one thing, it's many," he says, according to the Daily Mail. "One major takeaway from this experience is that the locals maintain a low stress, yet active lifestyle well into old age." The episode shows Zac being stunned to learn high-protein diets the low-to-no-carb menu he followed for years to achieve the so-called "perfect" Hollywood physique, can actually accelerate the development of diseases like cancer. "I'm definitely looking at my life a whole new way," he says. "I gotta get out of Hollywood, I'm done. It's not a place conducive to living a long, happy, mentally-sound life. I love California, I just think that dense population of people and city life is clearly not leading to many centenarians." Zac adds that "being an actor … in the public eye … leads to isolation." Contrasting his life in Los Angeles, where "it's hard to go out" because of the attention, with "the sense of camaraderie" he's developed with the cast and crew of the show, Zac says, "…I can feel myself becoming healthier and being happier every day. Meanwhile, Zac's reportedly spent his quarantine time in Australia's Byron bay. A new report from The Sunday Telegraph even claims he's looked into buying a beachfront home in the suburb of Broken Head.

Lea Michele recently deactivated her Twitter account amid reported bullying related to Naya Rivera's disappearance last week. The "Glee" alum is still on Instagram, though, and like many of her former castmates, she used Instagram to express her grief Monday as authorities confirmed they'd found Naya's remains in Lake Piru, where she had been boating with her son when she went missing. Lea, who is expecting her first child with her husband Zandy Reich, also marked July 13 as the day another costar,Cory Monteith — also her boyfriend at the time — died seven years earlier as a result of "mixed drug toxicity." According to People, Lea shared a black and white portrait of Naya on her Instagram Story, then shared a black and white photo of Cory, followed by a larger cast photo from the set of "Glee." Despite rumors Lea and Naya didn't get along, Naya wrote in her 2016 memoir that such "rumors of our 'feud'" were "blown out of proportion," explaining that they both had "strong willed and competitive" natures, which weren't "a good mixture." Speaking to Andy Cohen on a 2019 episode of "Watch What Happens Live," she said the two never had a "beef." Authorities believe Naya, 33, died after helping her son get back on the boat after they got out to swim. She seemed to have been unable to get back on herself. Investigators have said her life vest was on the boat when her son was found on the pontoon, healthy, but alone.

"Empire" star Bryshere Y. Gray, who played Hakeem Lyon on the show, was arrested Sunday night in Arizona after his wife reported he assaulted her repeatedly and choked her until she lost consciousness. Citing a press release about the arrest, Deadline reported the woman hailed a "bystander" from a nearby gas station and told the driver her husband had beaten her "for several hours" at their home in Goodyear, outside Phoenix. She then called police, who confirmed she had "numerous visible injuries" on her body. Police said they dispatched officers to the home but Gray initially refused to come out. Eventually, they sent in SWAT and crisis negotiation teams. At some point Gray approached the officers and was "taken into custody around 7 a.m.," where he was booked on charges of aggravated assault, assault and disorderly conduct.

"Women who have been raped are entitled to a much greater recovery than women who just met Harvey Weinstein." That's what a federal judge ruled Tuesday at a hearing about a proposed settlement against the former producer the judge said would have created "an equality among" class action plaintiffs who have accused Weinstein of sexual harassment versus sexual assault and rape, Page Six reports. The deal would have provided about $19 million for victims. An attorney for some of the women who opposed it called the proposal "one-sided" and said it would have unfairly protected Weinstein, his brother Bob Weinstein and shareholders in their company. Weinstein is currently serving 23 years in prison after being found guilty of rape and other sexual assault charges.

Paris Jackson and her boyfriend, Gabriel Glenn just released their first EP, "The Soundflowers." During an appearance on "Good Morning America" Tuesday, Paris credited both her late father, Michael Jackson, and her older brother Prince Jackson, with the support she needed to follow through on her interest in music. Her dad died 11 years ago, but she recalled how much his encouragement meant to her and her brothers when they were growing up. "No matter what it was we were interested in, at one point, I wanted to be an astronaut, he was like, 'Do it. Do it,'" Paris said. "You know, 'Educate yourself as much as possible, then go with it.' With every aspect of life, it was just supportive … I think we were really lucky to have that. 'Just do what makes you happy and do it well.'" Paris said she only just began "embracing" her musical side in the "last couple of years," but she now feels like she's on her destined path. "I originally started writing music for myself, just as, like, just to get things out, to purge. It just feels good to… share it. It feels like, not butterflies in your stomach, but in your heart," she explained. One of the songs on the five-track EP, "Geronimo," was inspired by the difficulties of peer pressure, bullying and other negativity kids seem to dump on one another. "Kids can be mean. Your body's going through changes, your emotions are everywhere, just all over the place," she said. "A lot of kids that age also suffer from depression and hardcore mental illnesses." Prince also spoke to "GMA," recalling to the outlet how he could "hear and feel all the emotion and pain and hurt that went into "Geronimo." He said he believed it was music "other people needed to hear." For Paris, that stamp of approval was huge. "He's everything to me, you know? I've always looked up to him and always wanted his approval and everything, and wanted to be more like him," she said of her brother. "So to hear him approve, not just approve but enjoy what I do, it's everything to me."

Baby could be coming out of that corner again. According to Deadline, Jennifer Grey has signed on to star in and executive produce a new "dance movie" for Lionsgate — and "rumblings" indicate it's "Dirty Dancing"-related. The outlet notes it's had no confirmations, but points to the fact Lionsgate owns distribution rights to the original 1987 film, in which Grey played Baby opposite Patrick Swayze's Johnny Castle. Back in 2017, Abigail Breslin starred in ABC's TV reboot. The new flick is reportedly set in the '90s, though few other details about the story have been revealed …

After months of shooting "At Home" versions of "The Tonight Show" because of the coronavirus pandemic, Jimmy Fallon became the first late-night host to film from his studio with Monday's episode, according to Deadline. Both Fallon and The Roots returned to Studio 6A at 30 Rockefeller Center, where they plan to film with a limited crew, no audience and "strict social distancing protocols," according to the outlet. The first show back featured New York Governor Andrew Cuomo, who said in a video chat, "New York is really open now that you're doing your show again." Charlize Theron and Little Big Town appeared, as well. Praising New Yorkers for "stepping up" and following safety guidance measures, Cuomo proudly noted that his state recently enjoyed its first day with zero deaths since the pandemic began.

Longtime "Dancing With the Stars" hosts Tom Bergeron and Erin Andrews have taken a bow for what turned out to be their last dance. ABC announced this week that the two will no longer host the long-running show. The network says it wants to "embark on a new creative direction," noting that Bergeron, who's hosted the series since its 2005 inception, "departs the show with our sincerest thanks and gratitude for his trademark wit and charm that helped make this show a success." He was similarly polite in a social media post acknowledging the major change. "Just informed that @DancingABC will be continuing without me. It's been an incredible 15-year run and the most unexpected gift of my career," Bergeron tweeted Monday. "I'm grateful for that and for the lifelong friendships made. That said, now what am I supposed to do with all of these glitter masks?" As a report from the AP reminds us, Bergeron took issue with producers when former White House press secretary Sean Spicer was named a contestant. As former dancer-celebs tweeted well wishes to the host, it was clear he'll be missed as "Dancing" moves ahead. Said Lea Thompson: "They might as well cancel it." 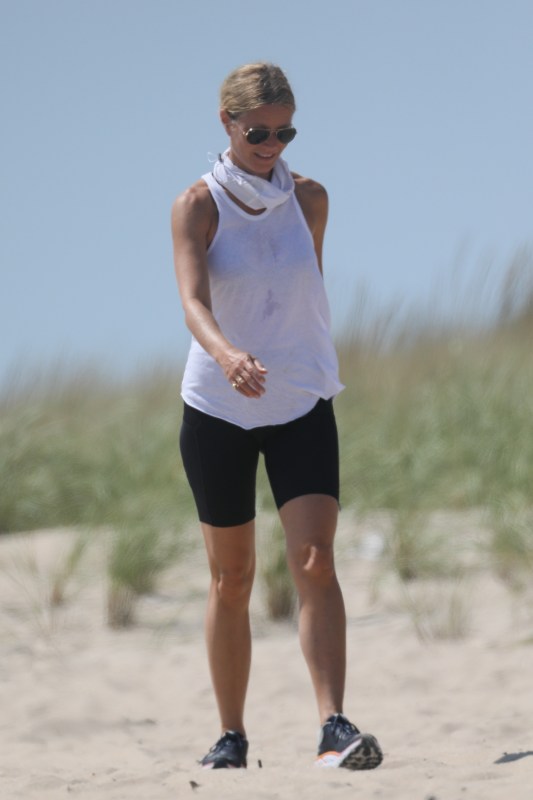