Pam Anderson has walked down the aisle for the sixth time with her fifth husband. On Jan. 27, the former "Baywatch" beauty told The Daily Mail that she secretly married her bodyguard, Dan Hayhurst, at her home in Canada on Christmas Eve 2020. "I'm exactly where I need to be — in the arms of a man who truly loves me," she said. The nuptials were conducted by a local pastor, and no family or friends were present. "I am in love. We were married Christmas Eve with both our families' blessing, everyone we know is happy for us," Pam, 53, said. "I was married on the property I bought from my grandparents 25 years ago, this is where my parents were married and they are still together. I feel like I've come full circle." However, in a Jan. 28 story in The Sun, Dan's ex, a woman identified as Carey, claimed Dan — who worked as a handyman and builder before he became Pam's bodyguard last year — was living with her, her child and his two kids when he cheated on her with the actress. "This is not the lockdown love story which is being portrayed, it's all a facade," Carey said, adding that her relationship with Dan "ended because of the affair Pam and Dan started while he was still with me."

Lori Loughlin's husband had better get used to his current surroundings. On Jan. 26, a judge denied Mossimo Giannulli's plea to let him serve the rest of his five-month prison sentence — for his crimes as part of a college admissions bribery scandal — at home. Earlier this month, Lori's husband claimed he was terrified of the coronavirus spreading in the prison system and asked the court to step in and allow him to finish his sentence in home confinement. According to TMZ, a judge said Mossimo's arguments weren't compelling enough and felt that he doesn't have a heightened risk of contracting the virus at USP Lompoc in Santa Barbara, California. His release is set for April 17.

Oscar- and Emmy-winning actress Cloris Leachman passed away of natural causes on Jan. 26 at her home in Encinitas, California. She was 94. Cloris, regarded as one of the funniest performers of all time, broke into pop culture after appearing on "The Mary Tyler Moore Show" in the '70s. She even got her own spinoff, "Phyllis," which netted her two Emmys and a Golden Globe. To date, she's the most nominated actress in Emmys history and is tied with Julia Louis-Dreyfus for the most wins. Her career also took her to movies, where she won an Academy Award for best supporting actress in 1971 for her work in "The Last Picture Show." Following her death, Hollywood tributes poured in.

After three years of marriage, Elliot Page and Emma Portner are divorcing. The "Juno" star, who recently came out as transgender, formally filed legal documents in New York City on Jan. 26. Elliot and Emma, a New York-based dancer and choreographer, married in January 2018.

Motherhood is around the corner for Paris Hilton. On Jan. 26, she told "The Trend Reporter with Mara" podcast that she's undergoing IVF and is ready to start a family with her boyfriend, Carter Reum. "We talk about [planning a wedding] all the time and planning our babies' names and all of that," she said. "So, I'm really excited to just move on for the next step of my life, and finally just have like a real life." She added, "We have been doing the IVF, so I can pick twins if I like. Kim [Kardashian] is actually the one who told me about that. I didn't even know anything about it."

Oh baby! On Jan. 27, Halsey dropped some bombshell news: She's pregnant. "Surprise!" the music star captioned a slideshow of photos showing her bare baby bump. She tagged screenwriter Alev Aydin over her belly, indicating he's the father. (Alev reposted the images on his Instagram Story.) He also commented, "Heart so full, I love you, sweetness." Halsey replied, "I love you!!!!! And I love this mini human already!"

Cicely Tyson passed away on Jan. 28 on 96. The Tony Award winner — who earned an Oscar nomination for her performance as a sharecropper's wife in "Sounder" — earned 16 Emmy nominations over her long career and won three, including two for her lead performance in "The Autobiography of Miss Jane Pittman." Cicely also took home an honorary Academy Award in 2018, making her the first Black woman ever to do so.

In a rather surprising story this week, Tim Robbins is divorcing his wife, Gratiela Brancusi. What's so shocking is that it wasn't publicly known that they were even married. The "Shawshank Redemption" star filed divorce documents in Los Angeles, it was reported on Jan. 27. Although it's not known when Tim and Gratiela actually married, they've been publicly linked for three years. They do not have any children.

The rumors are true: Kourtney Kardashian and Travis Barker are dating. On Jan. 24, multiple media outlets confirmed that the duo was on vacation together and had been quietly seeing each other. "They've been dating for about a month or two," a source told People magazine. "They've been friends for a long time but it's turned romantic." An insider added, "He's liked her for a long time and she just got more open to the idea. He's a good guy and a really great dad. Her family and friends all really like him. Their kids all get along too, which is sweet." Kourtney's famous family all reportedly like the blink-182 drummer and approve of the romance.

Ioan Gruffudd and Alice Evans' marriage is in crisis. "The Mentalist" actress announced via Twitter that her husband, who starred in "Fantastic Four," no longer loves her and has decided to "leave his family." She added, "Me and our young daughters girls are very confused and sad. We haven't been given a reason except that he 'no longer loves me.'" The tweet was later deleted. Afterward, Alice claimed that she didn't take down the tweet, alleging that Ioan, whom many also know from his bit role in "Titanic," deleted it. "I didn't delete the tweet from a few hours ago about him leaving. He did. From my account," she wrote on Jan. 26. "And hell yes when I am being gaslit and mentally tortured then hell yes I will wash my linen in public." Alice's friend's wonder if another woman might be involved, something Ioan's parents deny. 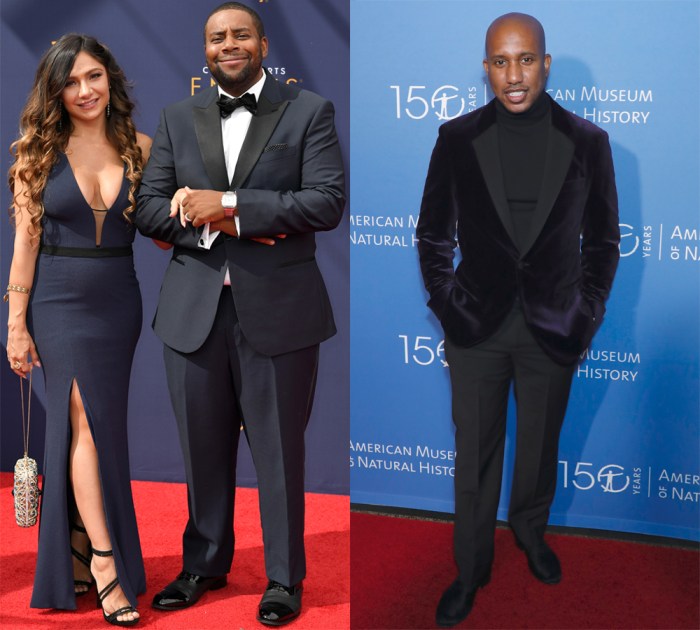