Pete Davidson, 27, has finally left the nest — just in time to impress his rumored new girlfriend, "Bridgerton" star Phoebe Dynevor. In a new TikTok video, Pete — who jokingly showed off his "bedroom where nothing happens because I live with my mom" in an online "tour" of his "apartment slash basement in my mom's house" last year — announces he now "officially" has his own place. "I just moved out of my mom's house," he says in the clip while trying to locate the keys to his new digs. "I'm fully out. I got a pad," he adds. In the Staten Island house tour post from 2020, Pete said he'd moved in with his mom "like, a year ago … to stay away from f—— people." According to the Daily Mail, the timing of the move suggests it came after his split from ex-fiance, Ariana Grande.

Since Channing Tatum and Jenna Dewan called time on their marriage of nine years in 2018, Channing's had to overcome anxiety around whether he could really "connect" with and support their little girl, Everly, as a single dad. Now, he wants to help other fathers see just how special their relationships with their daughters can be — through his first children's book, "The One and Only Sparkella." Described by the publisher as an "ode to self-esteem and the love between a father and daughter," the forthcoming picture book was largely inspired by Everly, 7. "We played a lot in her room over quarantine, and it helped flesh out the story," Channing recently told Parents magazine. Asked what message he hopes the book will convey to dads, the actor, 40, told the outlet, "I want dads not to be afraid to go into their daughter's world and discover who they are." He explained, "When I became a single father, I had a lot of fear about connecting to Everly in every way that a little girl might want. I didn't wear nail polish or know how to braid hair. But now I do both." Added Channing, "I jumped with both feet into this magical world, and I was rewarded with a kind of love that I don't think I would have ever been able to have otherwise." "The One and Only Sparkella" hits shelves on May 4.

RELATED: The best celebrity memoirs to read while stuck at home

Nearly 20 years after they split, Ben Affleck has nothing but respect for his ex-fiance, Jennifer Lopez. "I don't know whether people know it or not, but the most impressive thing about her (and that is a long list) was her extraordinary work ethic," Ben recently InStyle of the magazine's May cover girl. "She had this humility coupled with the basic assumption that not only did you have to work incredibly hard to succeed, you had to then push yourself even further." Ben and Jen were only together for a couple of years, but in that time, he said he was struck by, "the seriousness in which she took her work, the quiet and dedicated way she went about accomplishing her goals and then how she would go back and redouble her efforts." Ben added, "She remains, to this day, the hardest-working person I've come across in this business. She has great talent, but she has also worked very hard for her success, and I'm so happy for her that she seems, at long last, to be getting the credit she deserves." As for the looks that helped land J.Lo on the cover of InStyle's annual beauty issue, Ben asked his ex, "Where are you keeping the fountain of youth? Why do you look the same as you did in 2003, and it kind of looks like I'm in my 40s … at best?" Ben and Jen's "Bennifer" era began after they met on the set of 2003's "Gigli."

Sunday's virtual SAG Awards ushered in another round of big wins for "Ma Rainey's Black Bottom," "The Crown" and "The Queen's Gambit." The ceremony also saw multiple stars use their acceptance speech platforms to spread larger social and political messages. While accepting his award for Best Male Actor in a Drama Series for "Ozark," Jason Bateman thanked his family and "Ozark" cast mates, then dedicated his award to the people helping the world see a light at the end of the coronavirus pandemic tunnel. "The biggest thank you goes to the healthcare workers who have tended to us all during this last year," he said, according to ET. Paying tribute to the "miracle scientists" who created vaccines "not only gonna let us continue making fake-life, but most importantly, the real-life that we're all yearning to get back to," Jason said his award was also dedicated to them — then he urged viewers at home to "go get your shot" so the world can "get back to normal."

Judging from the Kardashian-Jenner family's social media posts, Kanye West skipped the Easter celebration his estranged wife, Kim Kardashian West, and their kids enjoyed over the weekend in Palm Springs, Calif. But fans suspect a very Yeezy-forward "Happy Easter" post from Kim was her way of quietly showing the world he's still on her mind as the two navigate the end of their seven-year marriage. On Sunday, Kim shared photos of herself in yellow workout gear, paired with matching Yeezys that appear to be an unreleased version of Kanye's foam runner design — aka, the "Yeezy Crocs." Fans were quick to point out Kim's divorce hadn't stopped her from promoting her soon-to-be-ex's shoe line. (She also seemed to be shielding her left ring finger from the camera in the photos, though her wedding band and engagement ring haven't made appearances on social media in quite a while.) Kim, who reportedly cited "irreconcilable differences" in her divorce filing and has requested joint legal and physical custody of the former couple's four children, is said to be communicating with Kanye only via his security and the nannies who help with their kids.

Hundreds of fans attend vigil for DMX in New York

On Monday, as DMX fought for his life in the ICU after suffering a heart attack three days earlier, a crowd of "hundreds" surrounded New York's White Plains Hospital as part of a vigil, according to TMZ. The rapper, 50, was also being visited by a number of his 15 children, amid reports his prognosis was "not good" as he remained on life support Monday evening. he rapper's fiancee, Desiree, and their son was reportedly spotted at the vigil, as well. In a statement made through a publicist, the family of "X," whose real name is Earl Simmons, said he was "facing serious health issues" and asked fans to keep him "… and us in your thoughts, wishes, and prayers as well as respect our privacy as we face these challenges." DMX struggled with substance abuse for many years. Multiple outlets are reporting the heart attack was caused by a drug overdose, though as of Monday, that had not been confirmed.

Lori Loughlin and Mossimo Giannulli's daughters seemed to be in good spirits over the weekend after their dad was released from prison early on Friday, having served most of his five-month sentence for charges related to his involvement in the nationwide college admissions scandal. In a post on her Instagram Story on Saturday, Isabella, 22, wore a shirt emblazoned with her father's name "Mossimo," according to ET. Her 21-year-old sister Olivia Jade Giannulli reportedly replied that the top was a "fitting choice." Later, Olivia shared photos on her Story that showed her looking content in flower-covered dress as she soaked up some sunshine. "Happy Easter lil bunnies," she captioned the post. Though Mossimo was able to leave federal prison — and the nearly eight weeks of solitary confinement he endured because of a COVID-19 outbreak — the designer will reportedly have to finish his sentence under home confinement, which ends April 17. Lori completed her two-month sentence on Dec. 28. The two were accused of paying $500,000 in bribe money to get Olivia and Isabella into U.S.C. Both were also ordered to pay fines and serve hundreds of hours of community service.

New mom Maren Morris has taken a vow to embrace her body one year after she and Ryan Hurd welcomed their first child. "Am never saying 'trying to get my body back' again," the country star shared on Instagram over the weekend. "No one took it, i didn't lose it like a set of keys," she continued, alongside a photo of herself in her undies sitting on a bed. Maren went on to decry "the pressure we put on mothers to 'snap back'" as "insurmountable and deeply troublesome." She signed off by telling followers — and herself — "you are and always were a f—— bad—," adding, "and yeah, I'm proud." Maren and Ryan's son, Hayes, was born last March, in an intense delivery that involved 30 hours of labor and a C-section.

Cher is rethinking her perspective on George Floyd's death amid the ongoing trial of former police officer Derek Chauvin, the white man who kneeled on the Black rapper and security guard's neck last year for nine and a half minutes, killing him, during an arrest. On Friday night, Cher posted a tweet that read (per NBC News), "Was talking With Mom & She Said 'I Watched Trial Of Policeman Who Killed George Floyd,& Cried.' I Said 'Mom, I Know This Is Gonna Sound CRAZY,But.. I Kept Thinking …..Maybe If I'd Been There,…I Could've Helped😔." The tweet has since been deleted, but screenshots of comments on the post showed fans warned Cher she was on a slippery slope as a white woman announcing she might have been able to save a member of the Black community. "Cher I say this with respect: White savior complex. Stop," one person replied. "Cher, I love u, but it wasn't just some people who didn't understand," one user tweeted. "We as white women just need to be careful that we don't make ourselves the star of the story," another wrote. "I'm sure you didn't intend that, but it can come across that way." The next day, Cher seemed to have taken the comments to heart, but still apparently failed to see the issue with so-called "white saviorism." "Wrestled With This Twt, Because I Thought some ppl wouldn't understand, Or Believe an Entertainer Could have Honest emotions about a human Being,suffering & Dying,even if It's Only Shown On tv," she posted on Saturday. "You Don't Know What I've Done,Who I Am,Or What I Believe.I CAN,I HAVE,& I WILL..HELP." One person pointed out that since "it was thousands of people" — not just "some" — who took issue with her first posts, "… maybe you should try to see why it was problematic? Even if your 💚 was in the right place." The singer, 74, then started inching her way toward an apology. "I Just got off phone With Friend Karen.Told her what Happened,& Realized,You Can P— Ppl Off,& Hurt Them By Not Knowing Everything That's'NOT Appropriate'To Say," she wrote before adding, "I know Ppl Apologize When They're In a Jam,BUT🤚🏼TO GOD🙏🏼,IM TRULY SORRY If I Upset AnyOne In Blk Community. I Know My❤️." 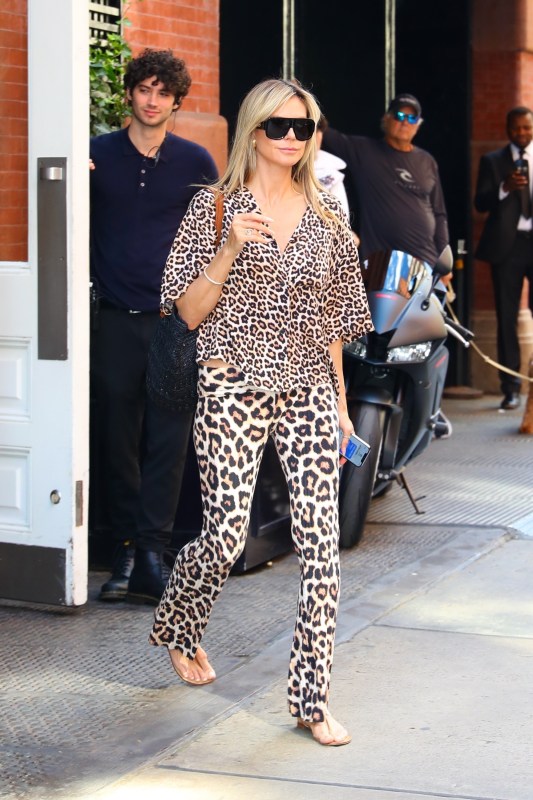