From her work in "Prizzi's Honor" to "The Addams Family" to "Smash," Anjelica Huston — who turns 70 on July 8, 2021 — has delivered stellar performances for decades. In honor of her milestone birthday, Wonderwall.com is taking a look back at her life and career in photos.

Keep reading to see major moments from her storied life…

Anjelica Huston, seen here in a portrait taken early in her career, was born in Los Angeles on July 8, 1951, to ballerina-model Enrica Soma and her husband, director-actor John Huston, who was in Uganda shooting "The African Queen" when his baby girl arrived. Anjelica joined two older brothers, Tony and Pablo — the second of whom her father had adopted years earlier with a former wife — and she later became a big sister to two half siblings born from her parents' affairs: Allegra (Enrica's daughter) and Danny (John's son). Anjelica moved to Ireland with her parents as a toddler and spent her youth there.

In 1969, Anjelica Huston made her on-screen debut in father John Huston's film "A Walk with Love and Death." She portrayed a 16-year-old noblewoman from France. She's seen here with her dad while filming the movie.

RELATED: Wes Anderson's best movies and where to stream them

In the early 1970s, Anjelica Huston signed with Ford Models and worked runways for designers from Armani to Valentino. She became one of fashion designer Halston's muses. She's seen here modeling Halston's clothes in 1972.

Following a four-year relationship with photographer Bob Richardson, who was 23 years her senior, Anjelica Huston began romancing actor Jack Nicholson in the early '70s (seen here). After a few years together, she started seeing Ryan O'Neal, but left him after he got physical with her, she wrote in her memoir "Watch Me." She went back to Jack and reluctantly tolerated his infidelity for nearly two decades.

In the early '80s, Anjelica Huston appeared in a handful of films including "Frances" and "This Is Spinal Tap." She had a larger role in the 1984 science-fiction flick "The Ice Pirates" in which she portrayed Maida (pictured). Bigger things were yet to come.

In 1985, Anjelica Huston portrayed Maerose, the daughter of a notorious New York City mafia boss in "Prizzi's Honor," which was directed by her father, John Huston, and starred her boyfriend, Jack Nicholson. While audiences and critics initially doubted her talent — arguments were made that she only landed the role because of nepotism — Anjelica proved them wrong. Her performance earned her an Academy Award for best supporting actress.

Anjelica Huston is seen here in 1986 holding her Academy Award for best supporting actress for her work in "Prizzi's Honor." With the win, Anjelica became the third generation in the Huston family to take home an Oscar. Dad John Huston won two, for writing and directing 1948's "The Treasure of the Sierra Madre," while grandfather Walter Huston won a best supporting actor Oscar for his performance in the same film.

Anjelica Huston, is that you?! In 1986, the actress starred alongside Michael Jackson in the 3D movie "Captain EO," which was directed by Francis Ford Coppola and written by George Lucas. The 17-minute movie, which had a major budget of $23.7 million, was shown at Disney theme parks from 1986 to 1998.

In 1987, Anjelica Huston starred as Gretta Conroy, the spouse of an academic portrayed by Donal McCann, in her father's final film, "The Dead."

Anjelica Huston's career was on fire as the decade wound down. In 1989, she earned her first Emmy nomination — for outstanding lead actress in a miniseries or a special — for her performance on the CBS miniseries "Lonesome Dove," which was based on Larry McMurtry's 1985 novel of the same name. She's seen here on the set with co-star Diane Lane. Anjelica also earned a Golden Globe nomination for her performance in the Western.

Anjelica Huston is pictured here alongside her younger brother, actor Danny Huston, at an Oscars party in 1990.

Anjelica Huston and Jack Nicholson's 17-year on-off relationship ended for good in 1990 after he confessed to her that he was having a baby with actress-model Rebecca Broussard. The couple are pictured here in 1988, two years before their split.

Shortly after her split from Jack Nicholson, Anjelica Huston portrayed the Grand High Witch in "The Witches," which was based on Roald Dahl's 1983 book of the same name. While the film didn't perform well at the box office — it earned $15.3 million — it has since garnered a cult following.

Anjelica Huston earned her third Academy Award nomination — this time for best lead actress — for her starring performance in the acclaimed 1990 neo-noir film "The Grifters" alongside John Cusack and Annette Bening. Despite initially being reluctant to accept the role from director Stephen Frears due to a particularly violent scene, she ultimately agreed and took on the part of veteran con artist Lilly Dillon. The film, which was based on the 1963 novel by Jim Thompson of the same name, won for best film at the Independent Spirit Awards and was named as one of the top 10 films of 1990 by The National Board of Review.

Anjelica Huston's most mainstream role came in 1991 when she portrayed spooky matriarch Morticia Adams in the dark comedy "The Addams Family." She earned widespread acclaim for her performance, which earned her a Golden Globe Award nomination. "The Addams Family" was a box office success, earning $191.5 million against a $30 million budget.

Anjelica Huston is seen here at the 48th Annual Golden Globe Awards in 1991, the year she nominated for a Globe for her performance in "The Grifters."

In 1992, Anjelica Huston married Mexican American sculptor Robert Graham. The couple is seen here at the Los Angeles premiere of her film "The Grifters" a year before they tied the knot.

In 1995, Anjelica Huston appeared opposite Melanie Griffith on the miniseries "Buffalo Girls," which was based on Larry McMurtry's 1990 novel of the same name. For her starring performance as Calamity Jane, Anjelica earned an Emmy Award nomination for outstanding lead actress in a miniseries or a special.

Anjelica Huston reunited with former love Jack Nicholson on screen in the 1995 film "The Crossing Guard," which was directed by Sean Penn, who cast her as jack's character's ex-wife. She hadn't seen Jack for several years when they started the project and things were awkward, she admitted in her memoir "Watch Me," but they met for lunch on the last day of shooting. "'You and me, Toots — we're like 'Love in the Time of Cholera,'" she recalled Jack telling her, adding that the comparison pleased her, the New York Post reported, because "that is one of my favorite books, by one of my favorite authors, about one of my favorite subjects — hopeless, enduring love." Anjelica earned another Golden Globe nomination for her performance in the movie.

In 1998, Anjelica Huston starred alongside Drew Barrymore and Melanie Lynskey in the Renaissance-era movie "Ever After: A Cinderella Story." The romantic drama, which offers a post-feminist interpretation of the classic fairytale, earned $98 million on a $26 million budget.

A few years after the release of "The Royal Tenenbaums," Anjelica Huston joined forces with Wes Anderson once again, this time for 2004's "The Life Aquatic with Steve Zissou." Anjelica, who starred alongside another star-studded ensemble cast that included Bill Murray, Owen Wilson, Cate Blanchett and Willem Dafoe, portrayed Eleanor Zissou, the estranged spouse of a peculiar oceanographer.

A cause for celebration! In 2005, Anjelica Huston took home a Golden Globe Award for best supporting actress in a miniseries or television film for her work in the historical drama "Iron Jawed Angels," which revolved around the women's suffrage movement in United States.

Anjelica Huston's third collaboration with Wes Anderson was in 2007's "The Darjeeling Limited" alongside Owen Wilson, Adrien Brody and Jason Schwartzman. In the comedy-drama, Anjelica played Patricia, the mother of three brothers who resides in a Himalayan Christian convent.

In December 2008, Anjelica Huston's husband of 16 years, sculptor Robert Graham, passed away after a rapid health decline over six months that started with a rheumatoid arthritis diagnosis, a heart attack and kidney failure. They're seen here earlier that year at the LACMA Opening Celebration of the Broad Contemporary Art Museum in Los Angeles.

In 2011, Anjelica Huston portrayed the mother of Adam Lerner, Joseph Gordon-Levitt's character who has cancer, in the drama "50/50." The film, which also stars Seth Rogen, received a warm welcome both critically and commercially, earning $41.1 million on an $8 million budget.

From 2012 to 2013, Anjelica Huston took her talents to the small screen to portray Broadway producer Eileen Rand on NBC's musical drama "Smash." The series, which earned a Golden Globe Award nomination for best musical or comedy television series, was canceled after two seasons.

Together again! Anjelica Huston and actor brother Danny Huston are seen here at the Vanity Fair Oscar Party in 2015.

In 2017, Anjelica Huston showed up to the Vanity Fair Oscar Party solo — and looked incredible.

In 2019, Anjelica Huston delighted audiences with a small but significant role in the Keanu Reeves film "John Wick: Chapter 3 — Parabellum." The third installment of the neo-noir thriller franchise was wildly successful at the box office, earning $326.7 million on a $75 million budget.

Anjelica Huston joined co-star Keanu Reeves at a Los Angeles screening of "John Wick: Chapter 3 — Parabellum" in May 2019. Next up for Anjelica? She narrates frequent collaborator Wes Anderson's 2021 film "The French Dispatch." 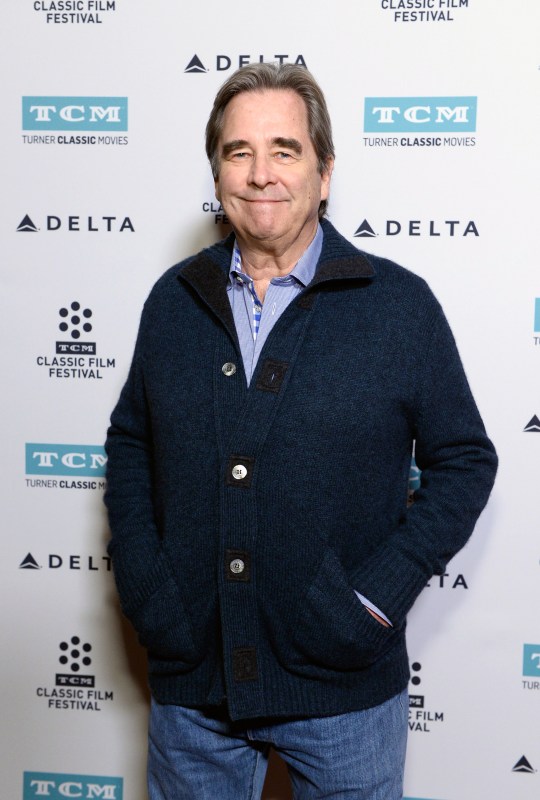