It's official! Jenna Bush Hager takes over Kathie Lee Gifford's co-hosting spot on the fourth hour of "Today" on April 8, 2019. In honor of this awesome promotion, Wonderwall.com is rounding up 13 things you might not know (but should!) about the former first daughter!

1. She's named after her maternal great-grandmother

2. She didn't want her father to run for president

She didn't want her dad to be president. Before Jenna Bush Hager's father, George W. Bush, followed in his own father's footsteps and ran for president, both Jenna and twin sister Barbara tried to discourage him. "When we were 18 and our father first sat us both down and told us he wanted to run for president, we both tried to veto that idea. I think like normal 18 year olds, we really wanted to enjoy college and grow and make mistakes, which we did," Jenna said during a Facebook Live chat promoting the memoir she penned with her sibling, "Sisters First." She's of course alluding to the time she found herself in trouble with the law, which we'll get to next…

3. She had some run-ins with the law as first daughter

Jenna Bush unwillingly found herself in the spotlight a few times during dad George W. Bush's presidency thanks to some run-ins with the law in 2001. During his first term, she received two alcohol-related citations in five weeks while she was underage at 19. The first time, she was caught drinking beer in a bar. The second time, she was trying to buy alcohol with a fake ID at a restaurant. Both incidents went down in Austin, Texas, where Jenna was going to college at the time.

4. She met her husband on the campaign trail

Jenna Bush Hager met her husband on the campaign trail! Back in 2004, Jenna crossed paths with Henry Hager while helping her father's re-election campaign. Henry was working for Karl Rove, who at the time was an adviser to George W. Bush. Three years later, they were engaged. They married in 2008.

She worked as a teacher! Among Jenna Bush Hager's jobs after graduating from the University of Texas at Austin? Teaching third graders at a charter school in Washington, D.C. She served as a teacher aide at the Elsie Whitlow Stokes Community Freedom Public Charter School there before moving to Baltimore, where she worked as a reading resource teacher.

Aside from working as a teacher, Jenna Bush Hager also worked with UNICEF's Educational Policy Department after college. Her work took her to Central America, with a focus on Panama. Jenna's experiences in the country inspired her to later write the book "Ana's Story: A Journey of Hope" about a 17-year-old single mother with HIV.

7. Her grandparents convinced her to work on "Today"

Jenna Bush Hager was still teaching in Baltimore when she got a job offer at NBC. The gig? Serving as a correspondent on "Today." She wasn't fully convinced it was right for her, so she turned to some pretty wise people for advice — grandparents George H.W. Bush and Barbara Bush. When she got the offer, she consulted with the former president and first lady, who watched an episode with her and weighed in. "My grandparents are the ones that talked me into working at the 'Today' show," Jenna later told People magazine. We'd say they made a good call!

She's a published author a few times over! Jenna Bush Hager wrote "Sisters First: Stories from Our Wild and Wonderful Life" with twin Barbara Bush. The memoir was released in 2017. "Ana's Story: A Journey of Hope," released in 2007, was a fictional tale based on Jenna's experiences in Latin America with UNICEF. She's also written two children's books with her mom, former first lady Laura Bush — 2008's "Read All About It!" and 2016's "Our Great Big Backyard." Next up for Jenna? The children's version of "Sisters First," a story about a pair of sisters and their tight bond, which she's again penning with Barbara. It hits shelves in the fall of 2019.

Jenna Bush Hager is a busy mom of two! When it came time to pick names for her kiddos, Jenna honored her family. Her elder daughter, Margaret Laura, shres a middle name with Jenna's mom and goes by the nickname Mila. She was born in 2013. Jenna's younger daughter, Poppy Louise, was born in 2015. Poppy actually comes from a nickname for Jenna's grandfather, George H.W. Bush.

11. She's an avid reader with her own book club

She has a book club! Yep, Jenna Bush Hager is an avid reader with her own book club on "Today." She chronicles her picks with the hashtag #readwithjenna on Instagram, and now she's sharing her picks with the "Today" audience so they can read along together. Jenna comes by her love of books honestly — her mom Laura was a librarian! She's also started a video series, "Open Book," in which she interviews celebrities about their favorite books. (She got former first lady Michelle Obama to open up about her love of "Pippi Longstocking.")

12. She reached out to other first daughters

Jenna Bush, along with twin sister Barbara Bush, wrote open letters to President Obama's two daughters as they entered and left the White House. Their most recent note was filled with sweet sentiments that highlighted their shared experiences as first daughters and hopes for Malia and Sasha Obama's next chapter. It even had a dose of humor as they alluded to their run-ins with the law. They ended the letter with: "You have lived through the unbelievable pressure of the White House. You have listened to harsh criticism of your parents by people who had never even met them. You stood by as your precious parents were reduced to headlines. Your parents, who put you first and who not only showed you but gave you the world. As always, they will be rooting for you as you begin your next chapter. And so will we."

13. She loves a good costume

She's not afraid of a good costume! Jenna Bush Hager is no stranger to the "Today" show hosts' famous Halloween extravaganza. She embraced the '80s theme in 2018 as Goose from "Top Gun." She also dressed up as her own grandmother, former first lady Barbara Bush, back in 2016. And when the hosts channeled "Saturday Night Live" skits in 2014, she joined Savannah Guthrie and Meredith Vieira to embody the ladies from the hilarious "Mom Jeans" fake commercial. 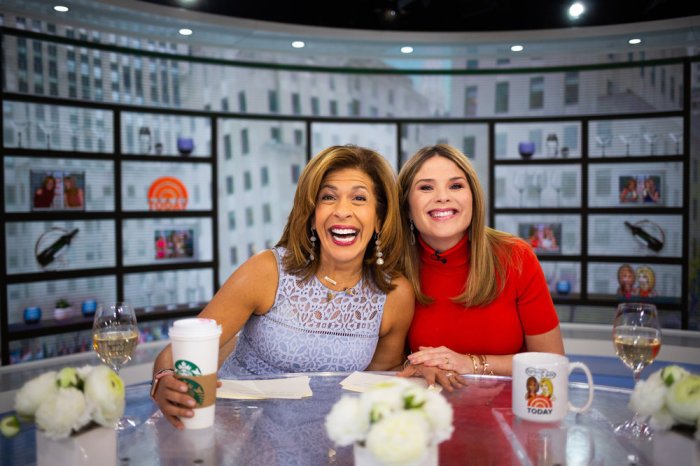 Up Next Jenna Facts