John Cena stars as an anxious and overprotective father in the hilarious new comedy "Blockers." To celebrate the movie's release on April 6, 2018, Wonderwall.com is running down the top 10 reasons why we're obsessed with the wrestler-turned-actor. Keep reading to find out more…

He's willing to change his mind for love

John Cena was always adamant that he never wanted to walk down the aisle again after his first marriage, to Elizabeth Huberdeau, failed in 2012. But all that changed after he began dating fellow WWE star Nikki Bella. Despite initially being hesitant, John realized that all he wanted to do was make Nikki happy, so he proposed to her in the wrestling ring in 2017 after five years of dating. So sweet! Then in March 2018, he revealed he'd started to change his mind after years of thinking he didn't want to have kids. John told Wonderwall.com, "I'm actually coming more to grips with maybe giving [fatherhood] a try."

John Cena gives back to children in a major way. He's granted more than 500 wishes for kids with life-threatening illnesses through the Make-A-Wish Foundation — the most in Make-A-Wish history! In addition to starring in a host of kids movies — such as 2017's "Ferdinand" and 2019's "The Voyage of Doctor Dolittle" — John is also a two-time host of the Nickelodeon Kids' Choice Awards. He emceed the show in 2017 and 2018, becoming the third star ever (behind Whitney Houston and Rosie O'Donnell) to host back-to-back ceremonies.

He knows all about health and exercise

In addition to being a professional wrestler, John Cena is also a graduate of Springfield College, where he earned a degree in exercise physiology and body movement in 1998. It was after he majored in exercise physiology (which is the study of exercise and how it can reduce or reverse disease progression) that John decided to pursue a career in bodybuilding, and, ultimately, wrestling.

John Cena has always worn interesting suits and costumes. When his WWE career began, he was known for wearing throwback jerseys, "Ruck Fules" shirts and a chain with a large padlock. He eventually began wearing military attire including camouflage shorts, dog tags, a Marine soldier's cap, jean shorts and various WWE-produced T-shirts. Today, the "Blockers" star is known for his fashionable and sometimes outlandish but always well-tailored suits.

Believe it or not, John Cena is a legitimate rapper. He has recorded multiple songs including "Basic Thuganomics," "Untouchables" and "H-U-S-T-L-E" with Murs, E-40 and Chingo Bling. His debut album, "You Can't See Me," was released in 2005 and has been certified platinum since 2010. John was also featured on two of rapper Wiz Khalifa's singles, "All Day" and "Breaks," in 2014.

John Cena began his wrestling career in 1999 but faced a difficult journey. He had to train at the Ultimate Pro-Wrestling University in California for two years and win over WWE scouts before he could reach the big leagues. Finally, in 2003, he achieved WWE superstardom — then later decided to transition to acting — and the rest, as they say, is history.

John Cena has supported fiancée Nikki Bella during her WWE run and in her other career pursuits. He's made frequent appearances on her E! reality show, "Total Divas," on her YouTube channel, "The Bella Twins," and has openly supported her wine label and activewear brand. John even shouts-out Nikki on social media! "Can I say 'I do' now? @BellaTwins thank you. For being understanding, caring, and lifting me up when I needed it. Beauty is much more than skin deep, and you are so beautiful. I love you," John tweeted on April 2. Awwww! And in March, John told Wonderwall.com that he can't wait for Nikki to tell him she's ready to walk down the aisle. "This is a woman I can't live a day without, so I'm willing to put everything else on hold for her," he told us. "I'm a very lucky man."

He has a great sense of humor

John Cena is known for his hilarious jokes and silly mannerisms. The wrestler often posts jokes and hysterical memes on his Twitter and Instagram pages, stars in laugh-till-you-cry comedy movies and frequently plays around with his friends and castmates. He's pictured here fooling around with "The Tonight Show" host Jimmy Fallon during an interview in 2017.

He admires other WWE superstars-turned-actors

Dwayne "The Rock" Johnson and John Cena were foes during their WWE days, but now the two have nothing but respect for each other. In fact, John has said that working with Dwayne on a "Fast & Furious" movie would be a fantasy come true. "That stuff is beyond my control, but I would absolutely love that opportunity," John told Entertainment Weekly in 2018. "That, for me, would be a dream. I'm never really like, 'Oh, I'd like to work with this person,' but I just think between our chemistry in the live performance setting, there's something certainly there with The Rock. So that would be my one name on the wish list." 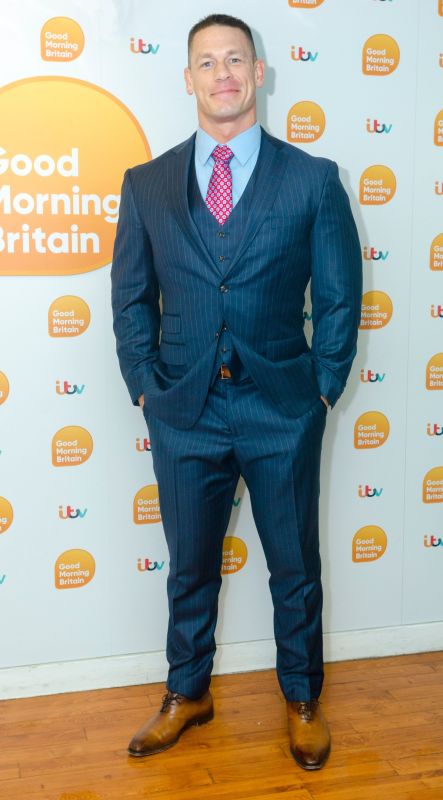 Up Next Fast Facts