Oh, the 2000s — when tiny shoulder bags, low-rise jeans and midriff-baring tops were all the rage! Over the course of the decade, a new crop of teen icons popped up. One of them? Raven-Symoné, who was already a well-known name after a long career as a child actress. Then in 2003, she landed the starring role on Disney's "That's So Raven," which ran until 2007 and earned awards nominations including outstanding children's program at the 2005 Primetime Emmys. The former "Hangin' with Mr. Cooper" actress also starred in Disney films like 2003's "The Cheetah Girls" and its 2006 sequel. Like many stars her age, Raven also launched a solo music career, releasing albums in 2004 and 2008. In honor of the star's 35th birthday on Dec. 10, 2020, Wonderwall.com is taking a look back at some of Hollywood's most beloved teen stars of the 2000s to find out what they've been up to. Keep reading for more…

RELATED: Female singers of the aughts: Where are they now?

In 2011, Raven-Symoné landed a starring role on the short-lived ABC Family series "State of Georgia," which was canceled after just one season. A year later, she made her Broadway debut as Deloris van Cartier in "Sister Act," a role she played for five months until the production's closing show. From 2015 to 2016, Raven was also a co-host on the ABC talk show "The View," which she left to focus on executive producing the "That's So Raven" spinoff "Raven's Home," which debuted in July 2017. She went on to release her fifth and most recent studio album, "The ReIntroduction," in 2020 — the same year she married Miranda Maday.

Teen icon Hilary Duff ruled our television screens in the '00s. 2001 marked the year Hilary scored the starring role on the Disney channel series "Lizzie McGuire," which also spawned "The Lizzie McGuire Movie" in 2003. The teen sensation went on to appear in several more notable flicks like "Agent Cody Banks," "Cheaper by the Dozen" and "A Cinderella Story" alongside '00s heartthrob Chad Michael Murray. In addition to acting, Hilary also launched her own solo music career during the decade — her debut Christmas-themed album, "Santa Claus Lane," was released in 2002 and was followed by four more albums starting with 2003's "Metamorphosis."

Hilary Duff has done a lot since her days as a '00s Disney star! From 2010 to 2016, she was married to former professional ice hockey player, Mike Comrie, with whom she shares a son, Luca. In 2010, she published the young adult novel "Elixir," which became a New York Times bestseller. In addition to releasing her fifth studio album, "Breathe In. Breathe Out.," in 2015, Hilary landed a co-starring role on the hit TV Land series "Younger." The Darren Star-created show, which focuses on a 40-year-old divorcée who poses as a 26-year-old to overcome ageism in the publishing world, was renewed for a seventh season, making it the network's longest running original series. In 2018, Hilary welcomed daughter Banks Violet Bair with musician-producer Matthew Koma, whom she married in 2019, and the two revealed in 2020 that they're expecting their second child together. "Lizzie McGuire" fans were thrilled when it was announced that Hilary would be reprising her role on a reboot on Disney+, however, in 2020, the revival hit some snags.

While Jesse McCartney was no stranger to acting by the '00s thanks to his time on the hit ABC daytime soap opera "All My Children," The WB family drama "Summerland" is what launched him to wider fame. In 2004, Jesse — who'd been a member of the boy band Dream Street — released his debut solo album, "Beautiful Soul," which was certified platinum. Throughout the decade, Jesse continued to act, appearing on television shows like "The Suite Life of Zack & Cody," "Hannah Montana" and "Greek." He then released two more albums: 2006's "Right Where You Want Me" and 2008's "Departure."

In 2014, Jesse McCartney dropped his fourth studio album, "In Technicolor" — his first release since the 2008 album "Departure." Four years later in 2018, he released the single "Better With You." 2020 has been a busy year for the former teen idol: In addition to competing on the third season of FOX's "The Masked Singer," in which he came in second place, Jesse also released two new tracks: "Yours" and "Friends." He got engaged to longtime girlfriend Katie Peterson in September 2019.

The "High School Musical" film series didn't just introduce us to stars like Zac Efron and Vanessa Hudgens. We also met Corbin Bleu! In addition to landing a supporting role in the hit franchise, Corbin also starred in the Disney Channel Original Movie "Jump In!" in 2007. That same year, he released his debut studio album, "Another Side," which included the single "Push It to the Limit." His sophomore album, "Speed of Light," was released in 2009.

Since landing his breakout role in the "High School Musical" film series, Corbin Bleu has enjoyed an enduring career. In 2010, he made his Broadway debut with a starring role as Usnavi in Lin-Manuel Miranda's acclaimed production "In the Heights." In addition to appearing in films like 2012's "Scary or Die" and 2015's "To Write Love on Her Arms," Corbin also landed a recurring role on the ABC soap opera "One Life to Live" as Jeffrey King in 2013. Since the start of 2020, Corbin has appeared on episodes of "Supergirl" and "Acting for a Cause." In 2016, he married actress-model Sasha Clements.

During the '00s, there were few stars as busy as Christy Carlson Romano! At 16, she was the first actress to simultaneously maintain three Disney Channel projects: a starring role on "Even Stevens," which ran from 2000 to 2003; a co-starring role in the 2002 film "Cadet Kelly" alongside Hilary Duff; and a voice acting role as the titular character on "Kim Possible," which ran from 2002 to 2007. In 2004, Christy starred on Broadway as Belle in "Beauty and the Beast" for a 31-week run and reprised the role two years later for Atlanta's Fox Theatre production of the hit Disney project. That same year, Disney released Christy's first EP, "Greatest Disney TV & Film Hits," which consisted of pre-released tracks and originally recorded material like "Dive In" and "Colors of the Wind." She also made a foray into writing: In 2006, Christy published the debut novel "Grace's Turn."

Years after concluding her time on "Even Stevens," Christy Carlson Romano revealed she'd struggled with her mental health. "I have never been perfect or pulled together as my reputation or the successes of my young adulthood might suggest," she wrote in an essay for Teen Vogue in 2019. "I struggled with all of my relationships, alcohol usage and career path for 10 years before going back to school and re-centering myself." While attending Barnard College, where she earned a degree in film studies, Christy met Brendan Rooney in a screenwriting class. They married in 2013 and now have two daughters. In addition to taking on voice acting roles on TV's "Big Hero 6: The Series" and in the "Kim Possible" movie, Christy also launched the YouTube series "Christy's Kitchen Throwback," on which she welcomes past Disney Channel stars to recreate dishes from their old shows.

It's our favorite sneaky brown-noser with a hidden agenda ("The Lizzie McGuire Movie," anyone?)! Adam Lamberg rose to fame after landing a starring role on "Lizzie McGuire," which ran from 2001 to 2004. He played one of Lizzie's best friends, David "Gordo" Gordon, who was also secretly in love with her! Since appearing on the hit series, Adam's only made two on-screen appearances: the first in 2005's "When Do We Eat?" and the second in 2008's "Beautiful Loser."

Following his "Lizzie McGuire" days, Adam Lamberg has kept a relatively low profile and reportedly worked at the Irish Arts Center in Manhattan. Thankfully, fans will get to see him on the small screen once again: He's is set to reprise his role as Gordo in the forthcoming "Lizzie McGuire" reboot alongside Hilary Duff.

After landing a starring role on "That's So Raven" in 2003, Kyle Massey starred on the spinoff series "Cory in the House," which ran for two seasons from 2007 to 2008. He's also appeared in projects including films like "Life Is Ruff" and television shows like "The Electric Company," "Gotham" and "Being Mary Jane."

Kyle Massey went on to compete on the 11th season of "Dancing With the Stars" in 2010 and ended up finishing in second place! He's enjoyed voice acting roles on television shows like "Fish Hooks" and "Mighty Magiswords" and more recently voiced Jeremy in "Rise of the Teenage Mutant Ninja Turtles" in 2019. The "Cory in the House" star is in a relationship with actress Hana Giraldo.

Michelle Trachtenberg has been in the business for years! Following her starring role as Harriet M. Welsch in 1996's "Harriet the Spy," she went on to land a main part on "Buffy the Vampire Slayer" as Buffy's (Sarah Michelle Gellar) younger sister, Dawn Summers. In 2007, she landed a recurring role as Georgina Sparks on The CW's "Gossip Girl."

We all remember Drake Bell, right? After landing a main role on Nickelodeon's sketch-comedy series "The Amanda Show," which ran from 1999 to 2002, Drake went on to star on the hit show "Drake & Josh." The series, which ran for four seasons from 2004 to 2007, followed the titular disparate stepbrothers who are forced to live together. In 2005, Drake released his debut solo album, "Telegraph," which was followed by his sophomore effort, "It's Only Time," in 2006. Throughout the '00s, he also appeared in films like 2005's "Yours, Mine and Ours," "College" and "The Nutty Professor."

2011 marked the release of Drake Bell's EP "A Reminder," which included the single "Terrific." Three years later, he released his third studio album "Ready Steady Go!," which debuted at No. 182 on the Billboard 200. He's since guest starred as himself on several television shows including "Cupcake Wars," "Home and Family," "Safeword" and "The Challenge: Champs vs. Stars." In August 2020, he was accused by ex-girlfriend Melissa Lingafelt of physical and verbal abuse over the course of their three-year relationship that began in 2006. He's denied the allegations.

Lalaine Vergara-Paras, better known as simply Lalaine, rose to fame as a '00s teen star thanks to her starring role on "Lizzie McGuire" as Lizzie and Gordo's best friend, Miranda Sanchez. In 2003, Lalaine also appeared on three episodes of "Buffy the Vampire Slayer." 2007 and 2009 marked two more feature film performances for the young star: She appeared in the romantic comedy-drama "Her Best Move" and the psychological thriller "Royal Kill."

After making a cameo in 2010's "Easy A," Lalaine took a step back from the spotlight for some time. In 2018, she made her return to the screen when she appeared in the film "One Night Alone." In 2020, she appeared in the movie "Definition Please" as it hit the film festival circuit. 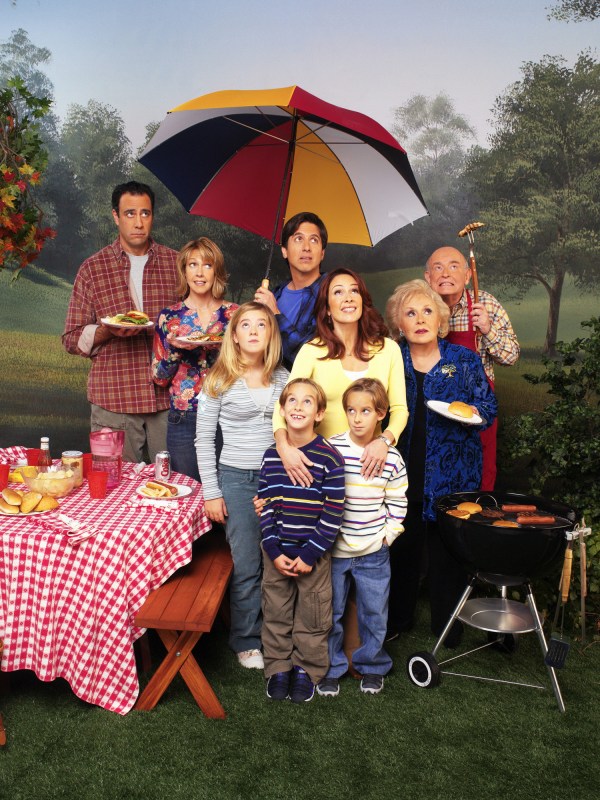