The Avengers are not only fierce in the superhero world — they're also fierce on the red carpet! In celebration of the debut of "Avengers: Endgame" on April 26, 2019, Wonderwall.com is taking a look at the cast's most stylish looks of late, starting with Brie Larson. The Academy Award winner wore this bold, playful purple and pink-ruffled Rodarte dress, which she accessorized with Gianvito Rossi pumps and diamond Anabela Chan earrings, to a fan event celebrating "Avengers: Endgame" in Seoul, South Korea, in April. Keep reading for more great recent looks from the cast…

Va-va-va-voom in Versace! Scarlett Johansson looked incredible in a metallic dress by the brand at the "Avengers: Endgame" premiere in Los Angeles in April 2019.

RELATED: "Avengers" actors and actresses: How their lives have changed

Chris Evans was lookin' good at the Los Angeles premiere of "Avengers: Endgame" in April 2019 in a blue Salvatore Ferragamo suit, green shirt and black tie.

Who's your best Chris? Chris Pratt certainly had a leg up in this well-tailored suit he wore to the Los Angeles premiere of "Avengers: Endgame" in April 2019.

A sleek silver suit by Giorgio Armani Prive was an inspired choice from Letitia Wright for the "Avengers: Endgame" red carpet premiere in Los Angeles in April 2019.

Elizabeth Olsen struck a pose in a gorgeous dark green Alexandre Vauthier dress during the "Avengers: Endgame" premiere in Los Angeles in April 2019.

Chadwick Boseman is known for taking fashion risks on the red carpet and his look at the 2019 NAACP Image Awards in March was no exception. The "Black Panther" star wore a printed Versace jacket with pops of copper, black and turquoise, a matching silk shirt, satin trousers and black Versace textured derby shoes. High fashion, darling!

Scarlett Johansson was a vision at a London "Avengers: Endgame" fan event in April 2019 in a unique black Tom Ford suit with an asymmetrically cut blazer. Fierce!

Brie Larson stunned in a slinky dress by Celine at the Los Angeles premiere of "Avengers: Endgame" in April 2019.

Chris Evans looked as handsome as ever at the 2019 Academy Awards in February where he wore a Salvatore Ferragamo dusky teal blue velvet jacket and tailored trousers ensemble with a black bow tie. Swoon!

Zoe Saldana looked lovely while appearing on "The Late Late Show with James Corden" in April 2019. The "Guardians of the Galaxy" actress donned a navy midi-length dress with oversized sleeves and black-and-white strappy sandals.

Oscar de la Renta-clad Danai Gurira was a vision in pink at the Los Angeles premiere of "Avengers: Endgame" in April 2019.

Gwyneth Paltrow donned a chic camel-colored turtleneck sweater and black leather pencil skirt from her Goop brand's G. Label line for an appearance at the 2019 SXSW Conference in March.

Gwyneth Paltrow once again donned her Goop brand's own G. Label — and looked good doing it — for the Los Angeles premiere of "Avengers: Endgame" in April 2019.

Like Chris Hemsworth, we're giving a big thumbs-up to the colorful suited and booted looks that the "Thor" actor and co-stars Paul Rudd, Jeremy Renner and Chris Evans donned for the Chinese premiere of "Avengers: Endgame" in Shanghai in April 2019.

Scarlett Johansson dressed up in an embellished Miu Miu minidress and Sophia Webster's crystal sock boots for a taping of "Jimmy Kimmel Live!" in April 2019.

Zoe Saldana delivered a fresh take on the LBD in a sheer-corseted Rosie Assoulin dress at the "Missing Link" film premiere in New York City in April 2019.

Chadwick Boseman really knows how to deliver great men's fashion: He wore this tailored black layered look featuring a subtle geometric pattern for the "State of the Industry: Past, Present and Future" presentation at CinemaCon in Las Vegas in April 2019.

Karen Gillan went for this casual yet cute look while attending the premiere of The Orchard's "The Unicorn" in January 2019. The "Guardians of the Galaxy" actress wore a plaid duster jacket with denim short shorts, a black silk tank and black boots.

Mark Ruffalo rocked this dapper look while appearing on "The Tonight Show With Jimmy Fallon" in March 2019. The Hulk actor wore a classic gray suit with an embellished black tie, black socks and black oxfords.

Don Cheadle brought some color to his interview on "Late Night with Seth Meyers" in February 2019. The War Machine actor rocked a merlot-hued suit with a floral-print shirt and white sneakers.

Another great Rodarte look from Brie Larson! The Oscar winner donned a rainbow-sequined crop top and matching high-waisted pants from the brand for a New York City screening of "Captain Marvel" in March 2019.

Bradley Cooper looked rakish at the 2019 BAFTAs in London in February. The "A Star is Born" actor-director rocked a Celine by Hedi Slimane black tux and bow tie with classic Johnston & Murphy patent leather shoes.

Paul Rudd will forever be young and handsome, as proven by his appearance at the 2019 Academy Awards where the "Ant-Man" actor wore a navy Canali tuxedo with a black bow tie.

Benedict Wong rocked this brown plaid suit at a Louis XIII Cognac event in Los Angeles in February 2019. The "Doctor Strange" actor, who plays Wong in the Marvel films, completed the look with a patterned shirt and brown oxfords.

Sigh… We can't get over how hot Chris Hemsworth looks in basically anything, but especially in this fly suit he donned for an "Avengers: Endgame" event in London in April 2019. The "Thor" actor wore a navy Etro plaid suit with a multicolored print shirt, a burgundy tie and brown oxfords.

Gwyneth Paltrow wore this bright, beautiful monochrome look while appearing on "Good Morning America" in January 2019 — a purple shirt and pants by Genny.

Elizabeth Olsen showed that you can never go wrong with a little black dress. The "Avengers" franchise actress donned a black Alexandre Vauthier minidress with Christian Louboutin heels, dangling earrings and a red lip at the 2019 Critics' Choice Awards in January. Chic!

Katherine Langford looked red-hot at the 2019 Valentino show during Paris Fashion Week in March. The "13 Reasons Why" actress, who has an unspecified role in "Avengers: Endgame," donned a floral-print red Valentino coat atop a matching high-neck dress accessorized with red heels and a black leather Valentino bag.

Thanos actor Josh Brolin looked great as he suited up in black with wife Kathryn Boyd by his side at the 2019 Hollywood For Science Gala in February 2019. 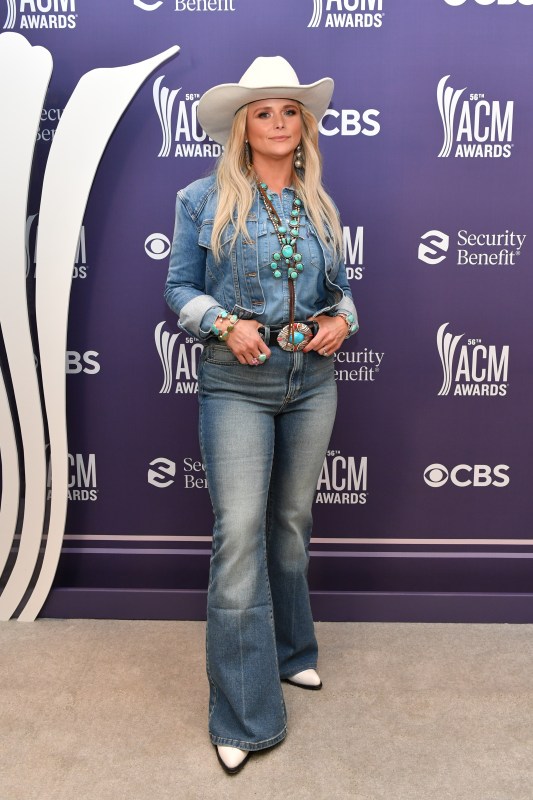