On the red carpet of the CMA Awards on Nov. 14, Carrie Underwood wowed in a long-sleeved, floor length gown by Uel Camila. The beautiful dress featured stunning pink floral and purple designed embellishments, the perfect selection for the red carpet of one of country's biggest nights. But that wouldn't be the last outfit Carrie wowed us with! Nope, during her hosting duties she had numerous outfit changes, and Wonderwall.com is taking a look at all of them…

RELATED: The cutest couples of the 2018 CMAs

We love a statement jacket! While hosting the CMAs with Brad Paisley in Nashville on Nov 14., Carrie Underwood started the show in this ensemble. She donned all black underneath, showing off her baby bump, but topped things off with a hot pink duster jacket by STELLO with gold detailing.

Bubble wrap couture? Brad Paisley jokingly gave Carrie Underwood a bubble wrap dress during the CMAs — a nod to the fact that she had her big fall a few days after hosting the same awards show in 2017. Carrie was a good sport, rocking the look during the show.

Another outfit change! Underneath that bubble wrap dress Carrie Underwood donned this little embellished navy blue number by Maison Alexandrine onstage during the CMAs in Nashville on Nov. 14. This one featured sheer long sleeves with delicate glittery polka dots and metallic detailing down the skirt.

Carrie Underwood has been sporting some bright hues during this pregnancy. While performing her song "Love Wins" during the 52nd Annual CMA Awards in Nashville on Nov. 14 she donned this bright blue number by STELLO, complete with a cape detail that featured a multicolored rainbow print. We've got to see it from another angle…

How beautiful is this blue STELLO design? This angle gives a better view of Carrie Underwood's bump as she sang her hit "Love Wins."

Carrie Underwood also sported this pretty gold sparkly dress during the CMAs in Nashville on Nov. 14. It was strapless and sequined and the perfect amount of sparkle.

From one pretty dress to the next! Carrie Underwood donned this pretty, form-fitting pale pink number which featured darker pink designs embellished down the frock while appearing on stage during the CMAs in Nashville on Nov. 14.

Does it get more glamorous than blue velvet? Carrie Underwood opted for the rich fabric while accepting an award onstage during the CMA Awards in Nashville on Nov. 14.

While onstage with Mason Ramsey and Brad Paisley during the CMAs in Nashville on Nov. 14, Carrie Underwood rocked this black and silver sparkly number with a belt detailing over her bump. Fortunately for us, after the show we got a closer look…

A better look! Carrie Underwood later posed with her award after the CMAs in Nashville on Nov. 14, giving us a better glimpse at the fun black and silver number that featured a minidress underneath a longer, silver-embellished skirt. 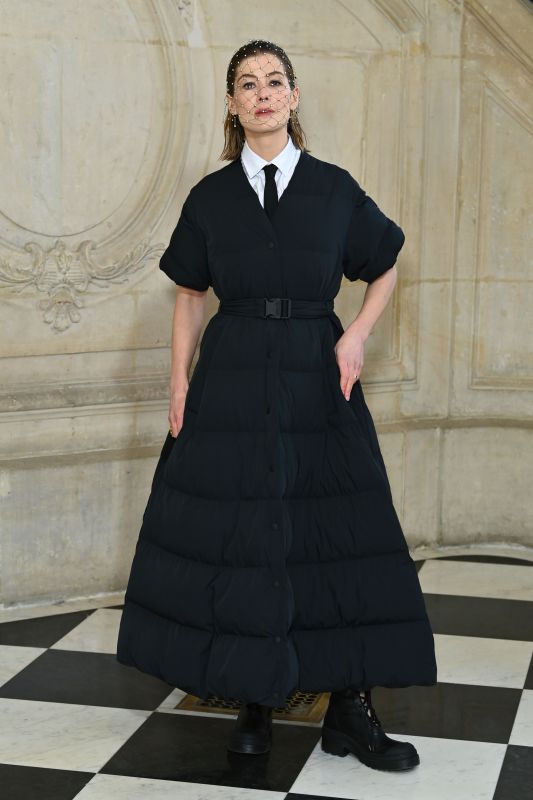