The MTV Video Music Awards are on! The iconic award show returns for its 37th annual ceremony on Aug. 30, 2020, and in honor of the big night, Wonderwall.com is traveling back to the 2010 VMAs ceremony red carpet to check out the fashion. First up? A sunglasses-clad Justin Bieber, who rocked a dark gray pair of jeans with a matching vest over a black T-shirt. Ten years ago, the pop star performed and won best new artist at the show! Keep reading to see which other celebs were in attendance — and what they wore — back in 2010…

Selena Gomez was on hand for the show in 2010 and selected this strapless silver Reem Acra gown for the occasion. It included beautiful embellishments along the neckline and a thigh-high slit, which helped show off her matching silver peep-toe pumps. She introduced a performance from B.o.B, Bruno Mars and Paramore with Ne-Yo that night.

It was black, white and barely there for Katy Perry at the 2010 MTV VMAs. That year, the pop star showed up in this Marchesa minidress featuring a ruffled white skirt and strategically placed black embellishments. She was up for best pop video and best female video for "California Gurls" that year.

RELATED: All the MTV VMAs Video of the Year winners ever

Thirteen-time nominee Lady Gaga made an entrance in this grand Alexander McQueen gown comprised of brown, red, orange and green fabric that culminated in a tulle skirt. The pop star, who set a record that year — she was the most nominated artist in VMAs history in 2010 — topped things off with a feathered headdress. But it was her outfit later in the night that really got people talking…

Yep, it's the meat dress! Lady Gaga wore a frock comprised of raw meat later on in the night at the 2010 MTV VMAs.

A young Drake looked sleek in a black suit and dress shirt with some fabulous royal blue loafers with hot pink tassels. The rapper, who was up for two Moonmen that year, performed his song "Fancy" during the telecast.

Emma Stone opted for a sleeveless black leather Emilio Pucci minidress with just the right amount of ruching on VMAs night in 2010. The actress was on hand to present a performance by Linkin Park alongside "Easy A" co-star Penn Badgley.

We're still not quite sure what Usher was wearing around his neck, but otherwise, the singer looked sleek. The three-time nominee donned a dark gray suit with black lapels and rocked a black T-shirt underneath then finished his outfit off with lace-up black boots.

Paramore's Hayley Williams donned a navy blue minidress with some pretty impressive embellishments and added cream peep-toe pumps to finish off her look at the 2010 show. Her band was up for best rock video for their song "Ignorance" that year.

Bruno Mars certainly looked dapper at the 2010 MTV VMAs. He rocked a black suit and a black skinny tie with chic black-and-white shoes. That year, he was up for one Moonman for his work on B.o.B's song "Nothin' on You."

The always stylish Florence Welch opted for cream Givenchy at the 2010 VMAs. The fitted and glimmering gown wowed on the star, whose band, Florence and the Machine, won best art direction for their song "Dog Days Are Over" that night.

Kesha was in attendance in 2010 and sporting a funky dark gray minidress with a fur collar. She added loads of accessories — just check out those rings! — sky high pumps and an extra-long braid. The singer was up for a whopping four awards at the big show that night.

Amber Riley rocked an LBD to the MTV VMAs back in 2010. The "Glee" star selected this sparkly minidress complete with a tulle layered skirt and finished things off with black ankle booties.

Ne-Yo kept things sleek for his monochromatic moment. He rocked all gray — from his newsboy cap to his sneakers — at the 2020 VMAs.

It was the peak of the "Twilight" craze in 2010, so Ashley Greene was in attendance at the MTV VMAs. The actress, who played Alice in the popular movie franchise, wore a Giambattista Valli minidress that featured a lacy black bodice and a ruffled short skirt. She completed her look with simple black heels.

Even "The Real Housewives of New York" star Bethenny Frankel was in attendance at the 2010 VMAs! The Bravo star arrived in a strapless black ruffled minidress.

Akon, who was up for best dance music video for his song with David Guetta, "Sexy Chick," wore a black T-shirt, jeans and an extra-long jacket to the 2010 MTV VMAs.

Sofia Vergara brought the sparkle to the red carpet. The actress, who presented the award for best hip-hop video at the ceremony that year, donned a sleeveless sequined minidress by Dolce&Gabbana.

Rosario Dawson rocked blue leather on the VMAs red carpet in 2010. The actress arrived in a knee-length, strapless dress and added green heels for a funky color combo.

Shimmering in gold, "The Hills" star Lauren Bosworth stepped onto the red carpet in a one-sleeved minidress. The star's frock feature one three-quarter-length sleeve and worked with those strappy black pumps.

It was a shimmering minidress for Victoria Justice, who donned a strapless frock with a pair of black peep-toe Christian Louboutins. She presented the best new artist Moonman to Justin Bieber alongside Romeo during the show.

Yikes! Comedian Dane Cook was in attendance in this sloppy ensemble — an ill-fitting white T-shirt under an oversized olive green jacket atop baggy jeans and sneakers.

Actress Miranda Cosgrove selected this black-and-blue Elise Overland design that featured plenty of sparkles and a ruffled skirt. She completed her getup with pointy-toe black pumps.

Pro dancer Karina Smirnoff continued the trend of minidresses with this bright yellow look. She paired hers with neutral platform pumps.

"Gossip Girl" star Penn Badgley was on hand for the 2010 VMAs. He rocked a leather jacket over a blue T-shirt, jeans and gray boots on the red carpet.

The MTV show "Jersey Shore" was wildly popular back in 2010, so Nicole "Snooki" Polizzi was obviously on hand for the VMAs in this busy blue paisley minidress with one sleeve. She added funky black heels to complete her guidette look.

We have a situation! It's Mike "The Situation" Sorrentino's VMAs getup — a white dress shirt, black vest, jeans and sneakers.

Another "The Hills" star in attendance? Stephanie Pratt, who arrived in this intricately embellished Nicole Miller floor-length gown. 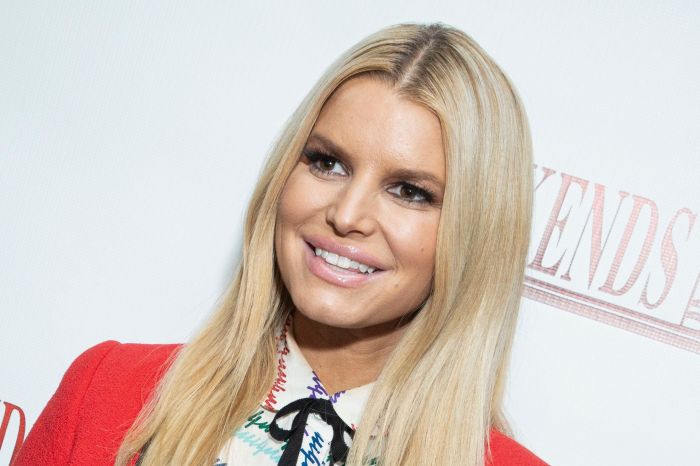