Happy birthday, Julia Louis-Dreyfus! The funny actress turns 60 on Jan. 13, 2021, and in honor of her big day, Wonderwall.com is taking a look back at her best fashion moments. First up? Her most recent fashion hit at the 2020 Academy Awards! The "Veep" star arrived in this gorgeous navy gown by Vera Wang. From the spaghetti straps to the perfectly tailored silhouette to the diamond necklace and bracelet, this stunning ensemble scored a serious A+. Keep reading to see more of her best looks…

In the 2000s, Julia Louis-Dreyfus wore a lot of Narciso Rodriguez. One of the most beautiful gowns she selected from the designer? This pale pink silk and chiffon confection that she donned at the 2007 Met Gala. From the lovely shade to the halter-style neckline, we adored everything about this beautiful fashion moment.

RELATED: Best and worst Met Gala fashion over the years

At the 2019 Primetime Emmy Awards, Julia Louis-Dreyfus glimmered in gold Oscar de la Renta. She stunned in this sleeveless gown with a plunging neckline and thigh-high slit that she paired with strappy gold sandals and complementary drop earrings.

RELATED: Most buzzed-about fashion moments of Emmys past

At the 1996 Golden Globes, Julia Louis-Dreyfus opted for a winter white moment. The "Seinfeld" actress donned a strapless gown with a sweetheart neckline and topped things off with a matching white shrug.

One of our favorite Julia Louis-Dreyfus looks took place at the 2008 Primetime Emmys. The hot pink and coral Narciso Rodriguez confection she wore featured a halter-style neckline and a cut-out below the bust.

We love a good two-tone moment, and Julia Louis-Dreyfus delivered in mixed shades of blue at the Screen Actors Guild Awards in 2014. She picked a one-shouldered Monique Lhuillier creation for the occasion, accessorizing with a simple black clutch.

This LBD was anything but boring! Julia Louis-Dreyfus arrived at the "Veep" season premiere in March 2019 in this glittery black Marc Jacobs gown. The strapless frock featured a tulle midi-length skirt and paired perfectly with her black pointy-toe pumps.

We loved this look! At the 1998 Primetime Emmys, Julia Louis-Dreyfus arrived in a pretty pink Bob Mackie design. The pink satin frock was custom made for the star and featured a corset-style bodice with a sweet lace detail at the bust atop a full skirt.

It was a sleek black Narciso Rodriguez moment for Julia Louis-Dreyfus back at the 2010 Primetime Emmy Awards. We loved the wide-set straps and the belt detail at the waist as well as the way she incorporated a pop of color via those gorgeous green earrings.

Julia Louis-Dreyfus looked gorgeous in an off-the-shoulder belted LBD at a charity event in April 2019.

For the 2017 Primetime Emmys, Julia Louis-Dreyfus donned this strapless black Carolina Herrera dress featuring a gold sequined design down the bodice. When it came time to add accessories, she opted to add another pop of color with her emerald-hued drop earrings.

Julia Louis-Dreyfus wowed at the 2015 Golden Globes in this stunning and sleek stark white Narciso Rodriguez number. Her long drop earrings were the perfect accessory for the one-shouldered gown.

The gorgeous Carolina Herrera frock that Julia Louis-Dreyfus wore to the Time 100 Gala in New York City in April 2016 featured a pink and green floral print down the front and a V-shaped neckline.

It was an asymmetrical black-and-white moment for Julia Louis-Dreyfus at the 2017 Golden Globes. The star arrived in this unique Georges Chakra gown that covered just one shoulder.

Julia Louis-Dreyfus wowed in a slinky Dolce&Gabbana frock at the "Downhill" premiere in February 2020. The off-the-shoulder vintage-inspired design featured a sweetheart neckline and the illusion of see-through black fabric.

Stunning in silver! Julia Louis-Dreyfus opted for a sleeveless tea-length Brandon Maxwell design with a straight neckline at the InStyle Awards in 2019. To finish things off, the "Veep" star added pointy-toe pumps in the same silver shade.

Back in 2013, Julia Louis-Dreyfus opted for a classic ballgown at the Golden Globes. Her Vera Wang pick had a sweetheart neckline, a belt and a full skirt.

It was a tea-length Monique Lhuillier number for Julia Louis-Dreyfus at the 2016 Screen Actors Guild Awards. Julia selected a strapless black-and-white number with sequined embellishments. When it came time to style it, she selected simple strappy black sandals and a diamond-studded necklace.

Julia Louis-Dreyfus looked terrific in teal at the 2009 Primetime Emmys. The star sported this strapless ruched Vera Wang design that included a belt detail and tiny train. The vibrant color popped on the red carpet and her drop earrings added just the right complement to the whole ensemble. 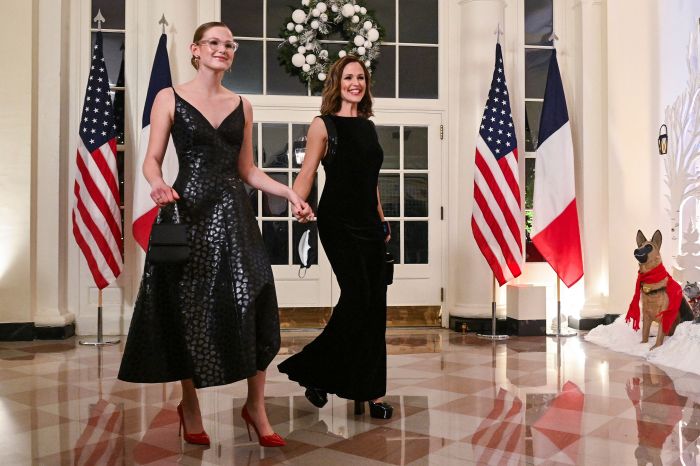