For Serena Williams, fashion and tennis go hand in hand. The professional athlete-turned-fashion designer is known for killing it on the red carpet and for pushing boundaries when it comes to activewear on the court. In honor of the Nov. 19, 2021, debut of "King Richard" — the biographical film about her humble beginnings with sister Venus Williams and their coach, dad Richard Williams — Wonderwall.com is taking a look back at how the GOAT's sense of style has evolved along with her career.

Here's proof that Serena Williams has always "served" up adorable ensembles: In 1992, the young athlete, who was about 11 at the time, showed off her impressive swing in matching separates featuring a Southwestern-inspired print. Too cute!

Serena Williams and big sis Venus Williams made waves with their signature 'dos — then controversial, now iconic — early in their careers. Serena modeled the look — braids wrapped in colorful plastic beads — while playing in the French Open in Paris on June 1, 1998.

Serena Williams made her red carpet debut at BMG's Grammy Awards afterparty in February 2000. She posed alongside big sis Venus Williams in a satiny spaghetti-strap top featuring a palm motif with black slacks and a pink shawl.

Pretty in pink! Serena Williams and big sis Venus Williams coordinated in pink ensembles while making their award show debut during the 2000 Teen Choice Awards. Serena chose a super-cute strapless number for the occasion and completed her look with sparkly silver heeled sandals.

Serena Williams looked red-hot in a sparkly gown with a dangerously low-cut neckline while making her runway debut at the Gridiron Glamour Celebrity Fashion Show during Super Bowl XXXVI in New Orleans on Feb. 2, 2002.

After a couple years of posing alongside big sis Venus Williams on the red carpet, Serena Williams branched out on her own at the 2002 ESPY Awards. She wore a bold lilac gown featuring a floral motif with a plunging neckline and cut-outs along the skirt while making her solo red carpet debut.

Orange you glad Serena Williams wore this curve-hugging orange minidress during a visit to the Harry Winston boutique in New York City on Aug. 23, 2002? We are! It was by far her sexiest fashion moment at the time.

As Serena Williams' red carpet style began to evolve, so too did her on-the-court style. She made waves, for example, when she wore a zip-up Puma tank slightly unzipped to show off her bellybutton piercing while playing during the Trilogy tennis event in Dublin on Dec. 6, 2002.

Serena Williams' affinity for body-baring looks continued in May 2003 when she chose a lacy white micro-mini for the Laureus World Sports Awards in Monte Carlo. She completed her look with white heeled sandals that elongated her super-fit stems.

Serena Williams, who was well into her bombshell phase at the time, donned a slinky LBD with draped open-shoulder sleeves during the Wimbledon Ball in London on July 6, 2003.

In November 2003, Serena Williams donned a super-short strapless LBD with a high-low hemline while debuting her Aneres clothing line at a fashion show in Santa Monica. Aneres officially launched the following year.

In 2004 — the same year Serena Williams launched her first fashion line — she also made her Met Gala debut in a slinky violet gown. She completed her look with silver heeled sandals, a silver clutch and pretty purple eyeshadow.

Serena Williams had a major couture moment at the annual White House Correspondents' Association dinner in Washington, D.C., on May 1, 2004. The tennis champ donned an avian-inspired gown with a drop waist and a full skirt featuring multicolored feathers.

Serena Williams fit right in with the Hollywood elite during amfAR's annual Cinema Against AIDS benefit at the Cannes Film Festival in France on May 20, 2004. She wore a trendy (at the time!) white-hot sleeveless frock with an asymmetrical hemline.

Serena Williams caused a stir with her untraditional ensemble during the 2004 U.S. Open in New York City. The tennis champ made headlines when she wore a pleated denim skirt with a studded black tank and black sneakers that initially resembled knee-high boots. (The shoes featured shiny removable leg warmers that made them look like patent-leather boots.)

It's hard to imagine now, but back in the day, this was a totally acceptable ensemble for a night out on the town! Serena Williams paired bootcut jeans with a white blouse featuring a lacy halter and a fringed bodice during the premiere of "The Last Shot" in New York City on Sept. 14, 2004.

Yep, the denim-on-the-red-carpet trend was totally a thing! Serena Williams wore bootcut jeans with a sleeveless brown blouse with a plunging neckline during the premiere of "Friday Night Lights" in Los Angeles on Oct. 6, 2004.

So unexpected! Serena Williams wore a surprisingly preppy Louis Vuitton ensemble — a black-and-white pencil skirt with a ruffled hemline and a matching jacket with a ruffled collar and a tie at the neck — during the fashion house's United Cancer Front Gala at Universal Studios in Universal City, California, on Nov. 8, 2004.

Nothing says "2004" like a pink tracksuit! The same year she signed an extremely lucrative deal with Nike that continues to this day, Serena Williams attended the McDonald's World Children's Day event in a pink tracksuit that was likely inspired by the ubiquitous Juicy Couture sets that were uber-popular at the time.

Welcome to the A-list, Serena Williams! The tennis champ attended the Vanity Fair Oscar Party for the first time in 2006. For her big brush with Hollywood, she donned a beautiful black gown with a thigh-high slit and gold sequin details at the waist.

Nike has created some truly stunning custom looks for Serena Williams over the years. Take the navy tennis dress she wore during the 2006 U.S. Open, for example. It featured golden swirls across the skirt that resembled sheer lace when she moved.

During Wimbledon in 2008, Serena Williams again made headlines for her unexpected on-court style. The tennis champ braved the heat in a white trench coat!

Serena Williams went business-casual in a belted magenta button-down dress — which was very on-trend at the time — at an event unveiling her Signature Statement collection, an exclusive line of accessories for HSN, in Miami on March 25, 2009.

The beginning of a beautiful friendship! Serena Williams and Gucci go together like peas and carrots. The tennis champ looked gorgeous in a belted one-shoulder emerald mini at a charity event hosted by the fashion house in New York City on Sept. 16, 2009.

Serena Williams modeled a popular red carpet look from 2010 — a black blazer over an LBD — at the premiere of "Date Night" in New York City that April.

Serena Williams returned to the Met Gala in 2011. This time, she donned an ultra-feminine strapless Oscar de la Renta gown with a lacy bodice and a feathered skirt. She topped off her look with a Philip Treacy fascinator.

How could we forget this major swimsuit moment?! Even Serena Williams' swimwear is iconic! The tennis champ made waves in a long-sleeved leopard-print one-piece swimsuit during a day of fun in the sun in Miami Beach on May 31, 2014.

A beaming Serena Williams showed just how much her Signature Statement collection had grown over the years when she walked the runway for her eponymous line in midriff-baring separates — a cropped short-sleeve tee and a pleated miniskirt — in New York City on Sept. 9, 2014.

Serena Williams brought sexy back to the 2015 Vanity Fair Oscar Party. The tennis champ looked red-hot in a slinky Ines Di Santo gown with a sheer panel featuring a sequined floral motif in the back.

Stunning! As Sports Illustrated honored Serena Williams for her athletic achievements during the 2015 Sportsperson of the Year Awards, the tennis champ showed off her accomplishments in the fashion realm: She donned a body-baring black gown from her own Signature Statement collection that night.

Serena Williams simply glowed in a gold LaQuan Smith gown with a thigh-high slit during the premiere of her EPIX documentary "Serena" in New York City on June 13, 2016.

Berlei brand ambassador Serena Williams flaunted her amazing abs in a super-cute white set — a pencil skirt with a lace-up slit and a tailored blazer — that she wore sans shirt to show off her pink Berlei bra while launching the brand's new line of sports bras in New York City on Aug. 25, 2016.

This, ladies and gentlemen, is how you introduce Beyonce! Well into a phase during which she frequently rocked super-sexy looks, Serena Williams risked a wardrobe malfunction in this stunning Sergio Hudson LBD. She raised temperatures while hyping up the crowd for Queen B during the 2016 MTV VMAs.

Epic in emerald! Serena Williams showed off her baby bump in a stunning Versace gown while pregnant with her first child with husband Alexis Ohanian during the 2017 Met Gala.

Serena Williams wore a black bodysuit inspired by "Black Panther" — "I call it, like, my Wakanda-inspired catsuit," she told the Guardian — during the 2018 French Open. After her untraditional ensemble made headlines, the president of the French Tennis Federation shockingly announced plans to enforce a dress code restricting what players can wear on the court. The French tennis tournament also banned catsuits, infuriating Serena fans. "It will no longer be accepted. One must respect the game and the place," he said, according to The Associated Press.

Virgil Abloh designed the Nike one-sleeve tennis dress with a tutu skirt that Serena Williams donned during the 2018 U.S. Open.

Serena Williams signaled that she had officially joined the fashion elite when she wore this bold look during the 2019 Met Gala. The tennis champ wore neon yellow Nike sneakers with her over-the-top couture: a neon yellow Atelier Versace gown embellished with foliage in various shades of pink.

Serena Williams evolves again! The tennis champ launched a new clothing line, S by Serena, in 2019. She walked the runway with her daughter, Alexis Olympia Ohanian Jr., at the collection's presentation during New York Fashion Week that year. The athlete-turned-designer paired a sheer lace short-sleeved button-down with a snakeskin-print miniskirt for the occasion.

Serena Williams donned one of the most extra looks of the 2021 Met Gala. (And that's saying a lot!) The professional athlete-turned-fashion icon wore a bold Gucci getup: a lace corseted bodysuit with a floral motif embroidered with sequined stars, lace gloves, metallic leather sandals and a pink ombré feathered cape.

Forever pushing boundaries! Serena Williams adhered to Wimbledon's all-white dress code during the 2021 edition of the tennis tournament while also staying true to her bold sense of style: The GOAT's ensemble — a jacket and a simple tennis skirt — featured a removable train. Only Serena!

Fashion risk-taker Serena Williams chose an unexpectedly funky getup for the AFI Fest premiere of "King Richard" — which she and big sis Venus Williams executive produced — in Hollywood on Nov. 14, 2021. The tennis champ sported a David Koma jumpsuit with asymmetrical legs: the "pantashoes" trend on one leg and a short with a thigh-high studded boot on the other. She completed her look with black opera gloves and plenty of bling. 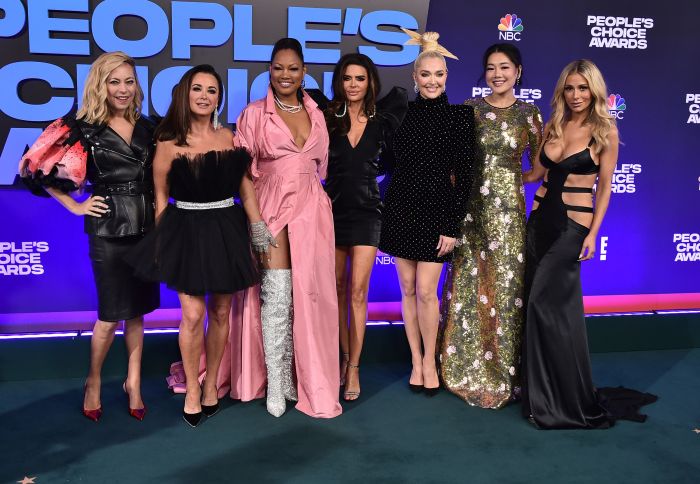 Up Next Red Carpet Time