Another week, another batch of romance updates! Gigi Hadid and Zayn Malik are still going strong after two years of dating. The gorgeous couple celebrated their two-year anniversary on Nov. 12 and Gigi shared a cute Instagram Story video of them kissing. The former One Direction singer told Billboard, "She helps organize my schedule around seeing her. She's in the studio quite a lot. She likes to cook for me and stuff — when I'm here late, she'll come down and bring me food. She's cool." The duo, who have been dating since meeting at a friend's birthday party, split their time around the world as the model is constantly traveling for work and he's often recording music. Now keep reading for more romance updates…

Serena Williams and Alexis Ohanian are married! The tennis superstar and the founder of Reddit were married in a "Beauty and the Beast" themed ceremony at the Contemporary Arts Center in New Orleans on Nov. 16. A bevy of A-List stars were spotted at the festivities including Beyonce, Ciara, Jay Z, Kim Kardashian, Caroline Wozniacki, Venus Williams, Colton Haynes, Anna Wintour, New Edition, Kelly Rowland and many more. Guests were said to be given golden trophy party favors as well as each table being named after one of Serena's twelve grand slam titles. A source told the DailyMail that Serena wore two dresses, one for the ceremony and another for the reception, and that the party went until after 3am. In keeping in theme with the Big Easy, the happy couple had a traditional marching band blasting down the street. It is rumored that Serena's gowns were custom made by Donatella Versace. Congrats to the gorgeous couple … now off to the honeymoon!

Chris Evans and Jenny Slate might refuse to confirm the status of their relationship, but Twitter fans have NO issue doing the work for them. The couple sent the Twitterverse into a tizzy when Chris posted a video of his dog howling along to a "Lion King" song that included a female voice chuckling in the background. On Nov. 10, Jenny tweeted, "My boyfriend does many dreamy&generous things but number 1 in my mind right now is how he celebrates my new turtlenecks/let's me show him my online shopping spoils&cheers me on." This is all speculation though, as the couple split up in February — though they were spotted having dinner together — twice — in Atlanta in mid-October. After their split last winter, Jenny had nothing but great things to say about Captain America. The comedienne told New York Magazine, "He's really vulnerable, and he's really straightforward. He's like primary colors. He has beautiful, big, strong emotions, and he's really sure of them. It's just wonderful to be around. His heart is probably golden-colored, if you could paint it." Sounds like these two are back together to us!

Looks like love is no longer a "Battlefield" for Jordin Sparks. The "American Idol" alum surprised everyone by announcing on Nov. 14 that she and model Dana Isaiah are married and having a baby! "We're both really excited. He's been like, 'I want to shout it from the mountain tops!' We're really proud to be married to each other and to be celebrating this," she told People. The duo revealed they were inadvertently set up by their mothers. Jordin met his family around the Super Bowl, and their moms set up a group text with their kids a few weeks later when Dana told his mom he was thinking about moving to Hollywood to pursue his modeling career. Dana told People, "My mom was trying to get [Jordin] to talk me out of moving to L.A. because she's experienced the industry out here. It wasn't like, 'We want you guys to date.'" They met for the first time over Easter weekend and fell in love! The couple decided to elope on July 16 while on vacation in Hawaii with friends. In August, they learned they were expecting a baby. "Once we got over the initial shock of it, now again just like it is with the marriage, to be able to share that this amazing thing is happening, it's such a great thing. We did this together!" Jordin said. Congrats, guys!

Elon Musk has revealed that Amber Heard dumped him. When the Tesla and SpaceX mogul and the actress split in August, it sounded like the breakup was mutual — but in an interview with Rolling Stone published on Nov. 15, he came clean about his heartbreak. The mogul said, "I was really in love, and it hurt bad…Well, she broke up with me more than I broke up with her, I think." The billionaire continued saying, "I will never be happy without having someone. Going to sleep alone kills me." We hope he finds love soon!

Drop a carpenter, gain a chef! A Nov. 13 report from the New York Post claims that Amy Schumer has moved on to chef Chris Fischer after splitting with carpenter Ben Hanisch in May after a year and a half of dating. According to the Post, Amy and Chris were spotted having dinner in New York City on Nov. 7 at Cafe Altro Paradiso. Chris used to work for Mario Batali at his restaurant Babbo in New York (see pic here) and currently runs his family's farm-to-table restaurant, Beetlebung Farm.

We guess The Weeknd is enjoying his weekends now that he's single! After the music superstar ended his 10-month relationship with pop star Selena Gomez, he's been seen out on the town living his best life with a bevy of beautiful babes. E! news reported on Nov. 12 that The Weeknd spent two nights in Los Angeles hanging out with Miami-based model Yovanna Ventura, who happens to be a one-time "friend" of Justin Bieber. "He thinks Yovanna is a beautiful woman and cool to kick it with but nothing more. She is fun hanging out with," a friend told E!. Following those wild nights, the "Starboy" hitmaker was spotted arriving at Leonardo DiCaprio's birthday party in a white Bentley with model-actress Emily Ratajkowski. A source told E!, "Abel is having a good time as a single dude. He is not taking any girl really seriously now." Except maybe his ex? The Weeknd was spotted sneaking out of ex-girlfriend Bella Hadid's apartment on Nov. 14. Multiple sources told E! News the two are "hanging out" again, though are not official back together. Since Selena seems to be living her best life with Justin, we think The Weeknd deserves to do the same!

Anna Faris isn't holding back! After a difficult split from Chris Pratt in August, Anna and new boyfriend Michael Barrett seem to be enjoying each other's company. The new couple was snapped in Venice, Italy, on Nov. 15 in a water taxi as they zipped through the city's winding canals. They met while Anna was filming her upcoming comedy "Overboard" and Michael was the cinematographer on the project, though it seems things didn't turn romantic until recently. The duo were also spotted spending time together in September and October.

Ariel Winter wants you to know that she is in LOVE. The "Modern Family" star shared a gushy post on Nov. 12 proclaiming her love for her boyfriend of one year, Levi Meaden. She captioned the photo, "Happy 1 year anniversary my love. I'm the luckiest girl in the entire world. Thank you for being the incredible man you are, and for making me the happiest I could've ever imagined. Here's to many, many more. I love you. P.S. your crazy butt is the only one who could ever make me agree to jumping off a cliff at a waterfall soooo yeah. I love you." The 19-year-old actress and her 30-year-old boyfriend have been living together for the past couple months in a house bought by the teenage star. Ariel told Us Weekly earlier this year, "He's just the loveliest person, he loves me through thick and thin. He's always telling me, no matter what I'm wearing, no matter what I'm doing, that I'm beautiful." Congrats!

Congrats are in order for Keegan-Michael Key! The comedic actor is engaged to producer Elisa Pugliese, E! News reported on Nov. 13. While the couple has been together for a while and have been spotted at the Tony Awards and Emmys, they have made sure to keep their relationship private. Keegan-Michael was previously married to Cynthia Blaise for 15 years. He filed for divorce on Dec. 31, 2015.

Seems like Nico Tortorella might not be so thankful this Thanksgiving. The "Younger" star opened up about the emotional cost of going public about his polyamorous relationship with Bethany Meyers. A Nov. 14 report from People revealed that some the couple's family members are struggling with the revelation that their children are in an unorthodox relationship. The actor told the magazine, "Honestly, it's kind of a sensitive topic right this second." He continued, "Because of all the attention that the relationship has gotten recently, we are coming up to the holiday season and because of certain things that were said, Bethany and I are not necessarily, completely welcome in her family celebrations this year." The actor kept positive though by using this situation to reach out to others. "There are millions of people in non-traditional relationships that get cut off from their families every single day and it's not okay," he said. The pair first opened up about their unconventional relationship in a July interview with The Advocate.

First it was a sushi date in Los Angeles. Now she's watching his band perform in Argentina?! Multiple outlets are speculating that Dakota Johnson and Coldplay's Chris Martin are heating up after she was photographed standing in the sound booth at Coldplay's concert in Buenos Aires on Nov. 14.

Is Demi Lovato romancing the highest paid soccer star in the world? It sure looks like something is going on! The "Sorry Not Sorry" singer was spotted clubbing with Neymar Jr. in London on Nov. 15. MailOnline reported that the duo partied till at least 3 a.m. with a number of his teammates. Demi, who was in town for the MTV EMAs, was most recently linked to Ryan Phillippe over Halloween and DJ Lauren Abedini, who she was spotted holding hands with while at Disneyland. We will be keeping our eyes on these two.

And i'm telling you… these two are done! In a shocking announcement, it looks like Jennifer Hudson, 36, and David Otunga, 37, are over. People reported on Nov. 16 that the couple of ten years have ended their relationship. Jennifer's rep released a statement to People saying, "They have been in the process of ending their relationship for a number of months. Today, Jennifer requested and received a protective order against her ex-fiancé. Jennifer's actions are solely taken in the best interest of their son." TMZ is reporting that Jennifer obtained a statement of protection after claiming David has exhibited "aggressive, threatening and harassing behavior toward me. I am now living in fear of further action David might take." It is also claimed that the couple's relationship has been over for months and that Jennifer has been dating someone new. The couple share an 8 year old son, David Jr. We hope they can resolve this issue with as minimal consequence to the child as possible. 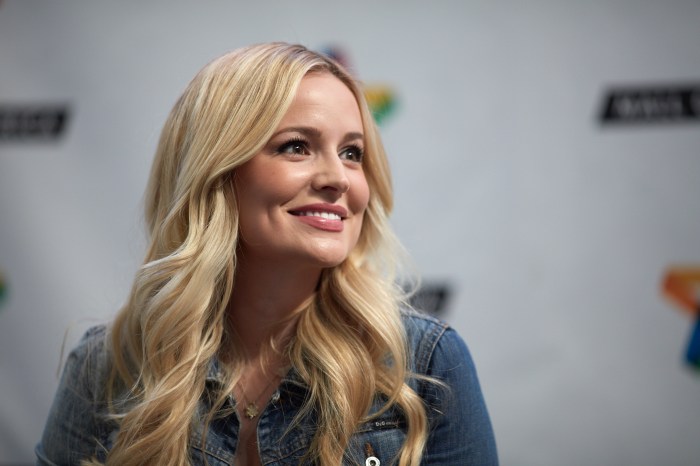