As speculation mounts about when Prince Harry and Meghan Markle will get engaged, a new Us Weekly cover story, out July 19, is claiming it could happen as early as Aug. 4 — Meghan's 36th birthday — though an insider tells the magazine that "my money is on a fall engagement." Either way, once the pair are betrothed, don't expect a huge, public wedding at Westminster Abbey like Prince William and Duchess Kate's televised event, claims the report. Harry, a source told Us Weekly, suggested to Meghan "that they could get married somewhere private and elope rather than have a showy wedding." Meghan's first wedding, to producer Trevor Engelson in 2011, was also a low-key affair: They invited about 100 family members and friends to their beachside nuptials in Jamaica. On July 8, The Mail on Sunday published a story explaining why Meghan and Trevor, who dated for seven years before tying the knot, split in 2013: In short, distance got in the way as Meghan was working on "Suits" in Toronto while Trevor was back in Hollywood. "It put a strain on the relationship. Trevor was in L.A. making movies, Meghan was in another country five hours' flight away and it simply took its toll," said a friend.

"Spider-Man: Homecoming" stars Tom Holland and Zendaya are dating! People reported the romance news on July 13. "They started seeing each other while they were filming 'Spider-Man,'" a source told the magazine. "They've been super careful to keep it private and out of the public eye but they've gone on vacations with each other and try and spend as much time as possible with one another." A second source added, "They're both really ambitious and they challenge each other — but, most importantly, they make each other crack up. They seem to have a really similar sense of humor and love joking around together. They have great banter back and forth." Within an hour, Zendaya and Tom both took to Twitter to address the dating report, though neither actually denied it. "Wait wait…my favorite is when it says we go on vacations together HA! I haven't been on a vacation in years!hbu @TomHolland1996 ???" Zendaya tweeted. Tom's response? "Does the press tour count[?]." She then replied, "I'm done." On July 17, the pair popped up on Zendaya's Snapchat, which showed them driving around Los Angeles together. She shared video documenting a paparazzo who was following them through traffic.

Kate Mara and Jamie Bell are married! The actress shared the news early on July 17 with an Instagram photo captioned "Nuptials." The image, which Jamie also shared (he captioned his "Me & Mrs B") shows the couple kissing while bathed in an ethereal light. The couple confirmed their engagement back in January.

It's over for Alexander Skarsgard and Alexa Chung. The Swedish actor and the British model-designer and TV personality recently split after two years of dating, E! News reported on July 14. "No one cheated on anyone," a source told E!. "It was a clean breakup that was caused by busy schedules and distance. They really did love each other and were pretty serious. They still have respect for each other." A day earlier, Page Six reported that Alexander and model Toni Garrn — one of Leonardo DiCaprio's exes — had been set up on a blind date in the Hamptons, but that it didn't go well. "This was the first time they met," an insider told Page Six. "It was a blind date set up by a mutual friend. Toni was nervous, so she brought two girlfriends. They had lunch at his house and then all hit Gurney's. [But] they didn't hit it off big-time. There may not be a second date in the cards." E! confirmed that the "Big Little Lies" actor has not moved on with the blonde model. "Alex and Toni just recently met each other but there is no romance," the source said. "A few people all hang out. Very casual. It wasn't a date. Nothing is going on with them."

Congrats to a music icon! Stevie Wonder tied the knot with longtime girlfriend Tomeeka Robyn Bracy in Jamaica over the weekend of July 15, according to RadarOnline. They wed in front of about 160 guests including John Legend, who also performed, and Al Green. "It's not much I can say," a family member told Radar. "Everyone, including family, had to sign a confidentiality agreement that threatens a $1 million fine if you talked to the media. I cannot quite afford $1 million." This is Stevie's third marriage.

Ben Affleck isn't the first handsome star that Lindsay Shookus has dated. According to a July 15 report from Page Six, the "Saturday Night LIve" producer — whose romance with Ben was made public on July 6 — has also been linked to the male leads on "Mad Men" and "Sex and the City." "In addition to Affleck, Shookus has previously been linked to Jon Hamm, who has hosted three times and made six guest appearances on 'SNL,' according to multiple sources," Page Six reported in a lengthy story about Ben and Lindsay's relationship. Page Six cited a source who saw Lindsay and Jon "looking cozy at a Kanye West concert at Madison Square Garden last September." Jon's rep, however, denied a romance, telling the Post that though Jon knows Lindsay from "SNL," they "haven't dated. They are not friends, they are acquaintances." An "SNL" colleague also told Page Six that there are rumors Lindsay, who books the sketch comedy show's top talent, dated Chris Noth too. His rep didn't respond to Page Six's request for comment.

Ellen Page has a new girlfriend. On July 13, she was photographed kissing Emma Portner — a Broadway Dance Center instructor who starred in Justin Bieber's "Life Is Worth Living" video — outside Café Gratitude in Los Angeles, DailyMail.com reported. Ellen was seemingly last photographed with artist Samantha Thomas, her girlfriend since 2015, in February.

Lea Michele has a new man! After photos of the actress-singer holding hands with a mystery man while strolling through New York City on July 18 emerged, fans identified him as Zandy Reich, the president of clothing company AYR, JustJared reported on July 19. One day later, Us Weekly confirmed the romance. "They've known each other for a while," a source told Us. "They met a few years ago and she's a fan of the clothing line [he works for]."

New man alert?! It appears that Michelle Williams has a new boyfriend, and judging by these pics published by MailOnline on July 19, it seems to be pretty serious! Michelle was spotted walking the streets of Rome — where she's been filming "All the Money in the World" — on July 15 with daughter Matilda Ledger while holding hands with a handsome mystery man. She was most recently linked to author Jonathan Safran Foer.

Days after filing for divorce, "The Real Housewives of Miami" alum Joanna Krupa is opening up about when and how her marriage to Romain Zago ended — and how they're both doing now. In a story published on July 19, the model and reality star told In Touch magazine that she was "caught off-guard" when Romain asked her for a divorce in mid-December 2016 (though the world wouldn't learn of their separation until May). "I spent many nights crying. It was the worst Christmas imaginable. I felt like my life had been turned upside down, and I couldn't see the light at the end of the tunnel. I cried. I couldn't eat. I probably lost about 7 pounds," she explained. "I was heartbroken. He had wanted a family, but I was always traveling and made work my priority." But as time has gone on, she said, "I've realized we were both unhappy." And now, seven months later, "I feel alive again." Joanna and her ex are on great terms and speak every day, she added. "We were together 10 years, and I want to respect that. We were both at fault, we both neglected the relationship, but we've found forgiveness."

"Hey Monday" frontwoman and "The Voice" winner Cassadee Pope and All Time Low drummer Rian Dawson have split after seven years together, their rep confirmed on July 12. "They have amicably ended their relationship, but remain friends, supportive of each other's careers, and maintain the utmost respect for one another," their rep told NashvilleGab.com.

Nick Lachey took to Instagram to celebrate his wedding anniversary on July 15 — and he couldn't stop gushing over wife Vanessa Lachey. "Six years ago today, I took this beautiful woman as my wife and the life we've built together is more incredible than anything I could have ever imagined!!" Nick wrote alongside a photo of them together on a beach. "Through all of the laughter, tears, triumphs, and challenges, you are my unconditional rock. I love you and our family more than you will ever know. Thanks for your patience, support, and love. Thanks for being you. Happy Anniversary!! #soulmate." Awwww…

As Mel B and Stephen Belafonte's divorce battle rages on, a judge has ordered the former Spice Girl to pay her estranged spouse temporary support of $40,000 a month. TMZ reported the news on July 14, explaining that it's actually a win for Mel since Stephen wanted at least $15,000 more per month. She's also been ordered to fork over a one-time payment of $140,000 to cover his legal fees.

"Shameless" actor Noel Fisher married "Shut Eye" actress Layla Alizada on July 15. The couple wed in the backyard of their Los Angeles home. People has a wedding photo of the bride, who wore a white lace gown by Morilee, and the groom, who donned a blue Kenneth Cole suit for the nuptials.

Thomas Dekker is gay — and married. The "Terminator: The Sarah Connor Chronicles" and "Heroes" actor came out in a lengthy Twitter post on July 13 following an Outfest event in which a Hollywood writer dropped clues about Thomas's sexual orientation. "My sexual orientation once again came into question this week when a prominent gay man used an awards acceptance speech to 'out' me. While he did not mention me by name, the explicit details of his reference made it easy for the public and media to connect the dots," Thomas explained. "While it is an odd situation, I thank him because it presents a prime opportunity for me to publicly say that I am indeed a man who proudly loves other men. In fact, this April, I married my husband and I could not be happier." 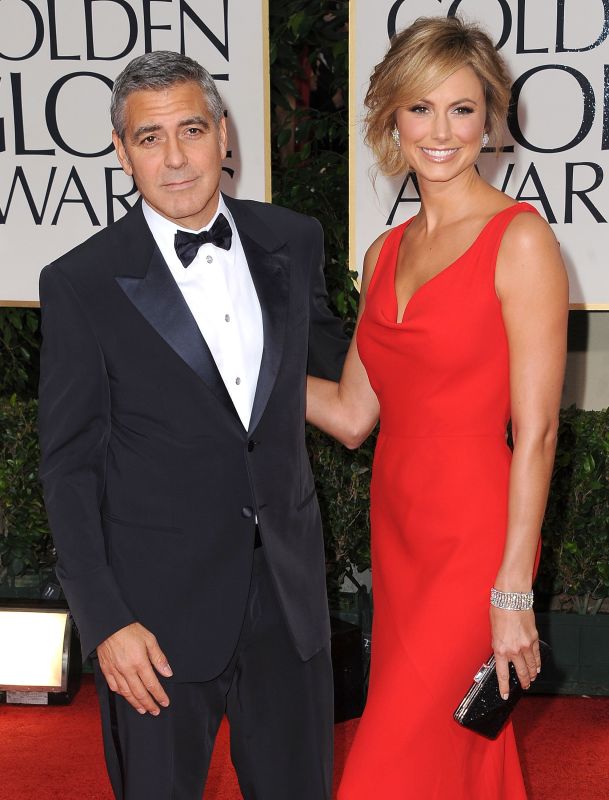 Up Next Iconic Globes Couples