Gwyneth Paltrow rarely shares photos of her teenage kids, Apple and Moses Martin, possibly because of the mom-shaming 15-year-old Apple unleashed last year after spotting a photo Gwyneth apparently posted without her consent. Anyway, the actress and Goop founder made an exception this week, letting her Instagram followers know about the crucial role her teens have been playing in her work-from-home life. On Tuesday, April 7, a fresh-faced looking Gwyneth posted a selfie that showed her flanked by Apple and 13-year-old Moses. "WFH with some moral support 💚," she captioned the shot. Gwyneth was presumably working on her ever-expanding wellness brand, Goop, which takes centerstage in the star's new interview for Town&Country's May issue. Titled "Gwyneth Paltrow has the last laugh," the profile looks at how Gwyneth's Goop became "one of the wellness industry's most recognizable brands," in spite of the many (many) haters who questioned her ability — and even her right — to run the company. Gwyneth says she got interested in wellness when her dad was diagnosed with cancer in 1999. "His treatment was so brutal, I was thinking, almost out of desperation, that we had to be able to do something else to help him," she says. "That's when I started to research food and nutrition." She also addresses those haters, whose criticism, Town&Country asserts, has long missed the fact that Gwyneth was "a pioneer" in the wellness biz. Gwyneth thinks that has a lot to do with society's resistance to seeing women wear multiple hats. "Why can't I get acupuncture and read a scientific paper?" she asks. "I can be intellectual, I can be sexual, I can be maternal, I can be all of these things." She continues: "In this society, we like our women in one digestible way that we understand, but if you try to be something else, we don't like it." The Oscar-winner goes on to say her critics' response to her is misplaced: "The people who are triggered by me — 'I don't like her because she is pretty and she has money' — it's because they haven't given themselves permission to be exactly who they are," she says. "It doesn't mean anything to me, because it's not about me. It's about what I represent, and that's about you."

Keep reading for the latest on Katy Perry's baby-to-be …

Will Katy Perry and Orlando Bloom name their daughter after Katy's grandmother?

The first of what could be many baby name rumors for Katy Perry and Orlando Bloom has arrived — and it's pretty believable. On the latest edition of "The Naughty But Nice Podcast with Rob Shuter," the host claims his sources have confirmed that when the couple's daughter arrives, Katy "plans to name her Pearl or Hudson or Ann," as a tribute to her late grandmother Ann Pearl Hudson, a woman who, it was noted on the podcast, "survived the Great Depression by making G-strings for showgirls in Vegas." According to the Daily Mail, one of Rob's insiders explained, "Katy believes that it is no coincidence that as her granny's soul leaves the earth, another soul arrives." Katy's grandmother passed away shortly after she announce she was pregnant.

RELATED: See which other stars are expecting babies in 2020

Sophie Turner has said she struggled seriously with depression and self-image issues in the past. Now, she's hoping to touch others who may be going through something similar. In "Survive," the new movie-series on Quibi, Sophie, 24, plays a woman suffering from depression, anxiety and PTSD who decides to kill herself after leaving an inpatient treatment center. Before she can get that far, the plane goes down and she and the other survivor are left fighting for their lives. "What drew me to the script was the way that mental illness was written so accurately in my opinion," she recently told PopSugar. "It felt real to me. I also loved the notion that this girl who wanted to die so badly ends up fighting for a life that she never wanted to live in the first place." While taking on the role didn't feel "necessarily therapeutic for [her] illnesses specifically," she said she took comfort in knowing she was helping others by giving an accurate depiction of mental illness. Ultimately, she said she hopes viewers will "feel less alone" when they watch the show, which began streaming this week. "But not only that," she said. "I hope that the story of this girl finding something to live for helps others find the ability to do that, too."

RELATED: Celebrities open up about their mental health struggles

Ariana Grande's still having fun with her natural curls. After surprising fans and followers last month with a peek at what she looks like without that signature high ponytail, the singer hopped on Instagram again on Tuesday, April 7, to show off her locks. In a quickie video post, Ariana pouts through a butterfly filter as she piles a ponytail on the top of her head. She didn't caption the post — and she didn't need to, judging from the response. "Keep this look after quarantimes pls," Katy Perry urged Ariana (via ET). Todrick Hall agreed,, commenting "SO DANMN CUTE." Stylist Brad Goreski was all about the look, too. "Yaasssss curls!" he replied. "Come through."

Tyler Perry's at it again. Over the weekend, the Louisiana-born, Atlanta resident tipped the out-of-work wait staff at his local Houston's restaurant $21,000 to split between 42 servers. Just a few days later, thousands of shoppers taking advantage of the seniors-only shopping hours at 44 Kroger stores in Atlanta and 29 Winn-Dixies in the greater New Orleans area discovered that their entire bill was covered. The Daily Beast reports Tyler was behind the random act of kindness, though he told Atlanta shoppers only that the bill had been paid for by "the Atlanta Angel." WDSU in New Orleans reports shoppers there had no indication of who was behind the generous gesture. In a thank-you note to Tyler on social media, the New Orleans chain wrote, "Winn-Dixie applauds your love for community and sincere generosity."

In the wake of Jake Gyllenhaal and Heath Ledger's groundbreaking performances in 2005's "Brokeback Mountain," The Academy wanted the stars to present at the Academy Awards. According to a new interview with Jake, it didn't happen because Heath couldn't support a would-be humorous opening segment in which the movie — an unlikely love story about two cowboys — was the butt of the joke. "I mean, I remember they wanted to do an opening for the Academy Awards that year that was sort of joking about it and Heath refused," Jake told Another Man magazine. "I was sort of at the time, 'Oh, OK… whatever.' I'm always like, 'It's all in good fun.' And Heath said, 'It's not a joke to me – I don't want to make any jokes about it.'" Jake added that he found Heath's seriousness compelling, though. "That's the thing I loved about Heath," Jake said. "He would never joke. Someone wanted to make a joke about the story or whatever, he was like, 'No. This is about love. Like, that's it, man. Like, no.'" Heath died of an accidental drug overdose in 2008. He was 28.

With a number of children's birthdays on the horizon at a time when social gatherings are largely banned, Prince William and Prince Harry and Duchess Kate and Duchess Meghan will likely be making some changes to their original plans when it comes to celebrating their little ones' milestones. Prince Louis turns 2 on April 23, Princess Charlotte turns 5 on May 2 and Archie Harrison Mountbatten-Windsor rings in his 1st birthday on May 6. "Unfortunately Kate's had to call off Louis' his big birthday party because of the COVID-19 pandemic, but the celebrations haven't been completely canceled," a source tells Us Weekly of Prince Louis' 2nd birthday plans. "They'll just do something smaller with immediate family only. If the weather is nice, William's planning to cook some chicken and burgers on BBQ and play outdoor sports and games as a family – football, chase and hide and seek. And obviously Louis will have a cake, too! He's so excited about his big day and is already singing happy birthday to himself." In late March another source told Us Meghan and Harry intended to celebrate their son, Archie's birthday both with the queen at her estate in Scotland and with Meghan's mom and friends in Los Angeles, where the family is now living. No word yet on whether they'll be able to travel overseas by May given the current COVID-19-related travel restrictions — or what may be in store for Charlotte when her birthday comes around.

John Cusack is getting heat on Twitter for a since-deleted post that seems to imply the new 5G networks are somehow related to the coronavirus pandemic, possibly making people less immune to the virus. In a screenshot published by Metro on Tuesday, April 7, John tweets, "5 – G wil be proven to be very very bad for people's health." When he was criticized for spreading unfounded conspiracy theories, he lashed out, posting: "Twittaverse many of you are thoughtful decent humans. Beyond the bots and trolls – many of you are just DUMB – just consumerist ignorant trash (sic)." Responding to others who took issue with his claim, he wrote: 'Very instructive. Suggest a new broadly used tech – may be harmful – hysteria ! Um asbestos ? Anyone – nuclear power – Fracking ? Your acting like f***ing Sheep – It's basic – not conspiracy …" According to The New York Post, John's not alone in his fear — Woody Harrelson and M.I.A. have reportedly posted similar theories.

Joy Behar expects to retire from 'The View' in 2022

Joy Behar is probably in countdown mode heading into the summer on "The View." The longtime co-host said in 2019's "Ladies Who Punch: The Explosive Inside Story of 'The View,'" that she's done once her contract wraps up in the summer of 2022. With a new paperback version of the book due out this week, JustJared dug up Joy's explanation of her retirement plans. "I have a three-year contract," Joy is quoted as saying. "But that doesn't mean I can't leave if I want to, because they can't really do anything to me at this point. I don't see myself staying for more [time]. That's it! I could be wrong. If I'm as fabulous in [2022] as I am now, I'll think about. But the chances of that happening…You know, time marches on. I'm not a kid."

Nicole Kidman thanks frontline workers: 'We recognize you and we love you'

As the daughter of a nurse who grew up hanging out in the hospital where her mom worked, Nicole Kidman is extra sensitive to what healthcare workers are facing every day during the coronavirus pandemic. She shared a special shout-out to those workers this week on Instagram in honor of World Health Day, sharing her respect for the hard work being done in hospitals around the world right now — and "to every frontline worker" putting their lives on the line to save others."To be able to thank you for your bravery and your selflessness during this time is so important," she says in the clip. "We recognize you," she adds, "and we love you." 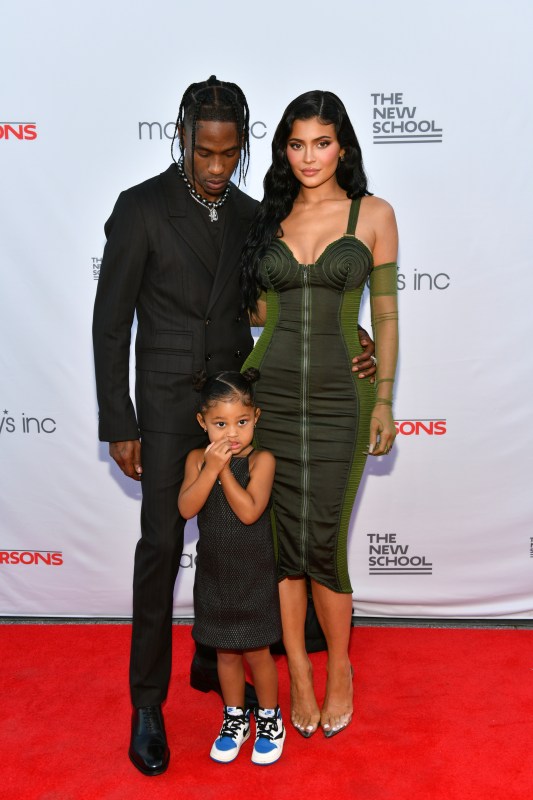