Khloe Kardashian explains why Caitlyn Jenner's transition was hard for her

Despite the happy red carpet photos and positive social media posts, Caitlyn Jenner and her family still have issues to work out in the wake of her transition. E! News shared a preview of this Sunday's "Keeping Up With the Kardashians" and it shows Caitlyn sitting down with Khloe to ask whythey've "grown apart" in the last year and a half. "Day after day after month after month, nobody calls, nobody checks in," Caitlyn says. "… You can't help but sit there and think, 'OK, is it because I transitioned? They don't like me anymore?' I want to know what I did wrong, what I didn't do wrong, what I did right, and move forward." Khloe explains that if things didn't go down after Caitlyn's transition in the way she would have "preferred," that doesn't mean her dad did something "wrong." "It was very hard for me to experience a lot of new things so quickly and still feeling like I have to protect my mom and certain things that were happening where I felt like they might not have been the most positive. But then I was also like, this isn't even my fight to fight anymore. I have my own s–t to deal with, so why don't you guys figure that stuff out. But I don't think Caitlyn is a bad person at all," Khloe says. Caitlyn points out that she's dedicated "23 years of my life invested in the family and you," to which Khloe responds her memories are of Bruce Jenner, not Caitlyn Jenner, when she thinks of the father who raised her after she lost her dad, Robert Kardashian. "So not having you in my life, it's a huge blow," she says, "because I'm like, 'OK, my second dad, this guy that I've grown up with, that raised me, was taken away from me.' But no one really let me have that."

Is Duchess Kate trying to keep Prince George away from the entitled kids in his would-be social circle? The Daily Mail claims George is set to start school at Thomas's in Battersea — even though the institution has an outpost right by Kensington Palace. Kate wants "to keep him away from the spoiled offspring of oligarchs and rock stars," one insider tells the Mail. Other sources, however, say the decision is based on the Battersea school's liberal, "hippy-dippy" approach to education, citing as evidence the fact that kids get unicorn stickers for good behavior and the teachers apparently appreciate Monty Python. Prince George started nursery school at Westacre Montessori in January of last year.

ICYMI, Beyonce shared a slew of adorable photos of her impossibly goals-worthy fam this week in honor of her wedding anniversary. The pics were throwbacks to Bey, Jay Z and Blue Ivy's trip to the Grand Canyon last year, and shared Beyonce.com gallery real estate with images with the moving lines about love written in text. While there were some super cute pics of Blue workin' the camera for her mom and dad, you'll be grateful to hear there have been no reports of 5-year-old Blue wearing an $1,800 Gucci dress while playing the sand … yet.

Claire Danes loves that her 'Homeland' character has no sex life

With the season finale of "Homeland" airing this weekend, Claire Danes shared her thoughts on her character, Carrie's personal life six seasons into the series. The CIA officer hasn't been romantically involved with anyone for ages but the way Claire sees it, romance takes different forms. "I actually think there are a lot of romances at play with Carrie this season — they're just not sexual. With Quinn and Saul and with Frannie — she has deep attachments, but very complex attachments to these primary characters," she said while speaking at a press event for the show in Los Angeles on Monday, April 3 (via Us Weekly). The actress also appreciates the fact that it's rare to see a central female character not be defined by who she's having sex with or whether she's involved with someone. "That's one of the great gifts of this world and this job is that she is so much bigger than her gender," Claire marvels. "She's defined by her ethics, her moral self, her political ambition, her bipolar condition. There's just so much at play."

T.I.: Donald Trump is 'the poster child for white supremacy'

T.i. stands behind his recent criticism of Donald Trump regarding the president's assertion that Snoop Dogg should be imprisoned for pretending to assassinate him in a video. On the Thursday, April 7, edition of "The View," he pointed out that it's Snoop's Constitutional right to speak freely about people and ideas with which he disagrees. he went on to say African-American celebrities who have met with Trump — like Kanye West — should have thought more carefully before acting. "Before you stand and smile and say this is a good man and take pictures, what about addressing the disrespect and disregard for our community that was done?" T.I. asked (via GossipCop ). "And what about him being the poster child for white supremacy and standing for the people who look to devalue our lives? Before you address that, there's no other conversation." In the wake of his initial meeting, Kanye deleted all of his Twitter references to Trump.

Wrestlemania romance update: When it comes to his lady, John Cena is a softie. In a new YouTube video (via UsWeekly), the soon-to-be husband of Nikki Bella explains what went into his design for the ring he surprised his fiancee with on Sunday, April 2. "I didn't just walk into a place and say, 'Please just give me a ring,'" he says in the clip. " I've been thinking about this for a long time … so I went to the good folks at Tiffany's and had them construct a ring." He continued: "The ring represents our entire relationship up until this point. If you look at the stones on the side, there are four individual stones on each side. One side represents me and one side represents her and the four means the years we've been together to come to center point. … The center point is a 4.5 carat round brilliant cut Tiffany diamond that represents the four and a half years we took to get right here. As with everything that we do for each other, there's always meaning behind it." According to Us, the ring is worth about $85,000.

As Bill Cosby's sexual assault suits piled up, his insurance company warned him it would not cover any costs related to the legal action, citing a stipulation in the policy that excludes its responsibility for situations involving "sexual molestation, misconduct or harassment." According to TMZ, AIG will have to defend the comic anyway. A judge has reportedly dismissed AIG's initial claim, sparking the company to agree to cover the costs of Tamara Green, Therese Serignese and Linda Traitz's filings. 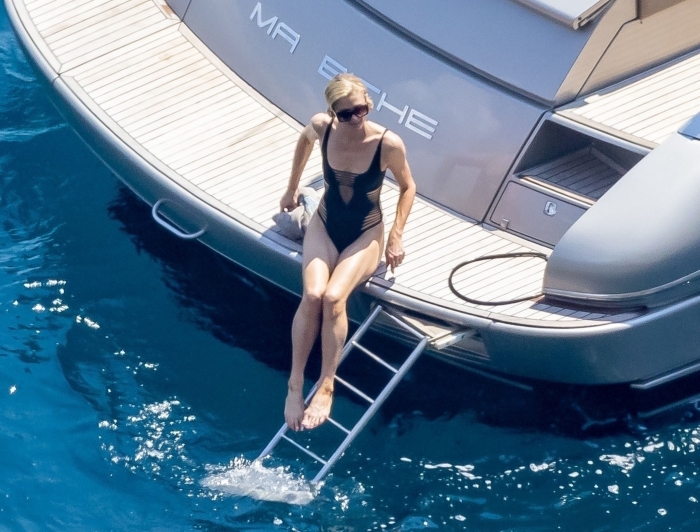