On Jan. 17, 2021, actress, game show host, animal activist and Hollywood icon Betty White turns 99. In honor of the comedy star's milestone birthday, Wonderwall.com is taking a look back at Betty's life and long career in photos. Keep reading to head back in time…

Betty White was born in Oak Park, Illinois, on Jan. 17, 1922, but her family moved to California when she was 1. While attending Horace Mann School in Beverly Hills as a teen, Betty wrote and starred in a play, which sparked her interest in acting. Her career started on the radio but before long, she'd landed a gig as Al Jarvis's co-host on "Hollywood on Television" — a daily live TV show. She's seen here on that show with actor Eddie Albert in 1952. Betty hosted the program solo after Al left the same year.

We all know Betty White is an icon — but did you know she was nominated in the very first women-designated Emmy category? Yep, back in 1951, she scored one of the first best actress nominations at the Third Annual Primetime Emmy Awards. At that time, nominations weren't tied to a certain project. She's seen here a few years later circa 1955.

"The Betty White Show" — which debuted in 1954 — was hosted and produced by Betty. The series was ahead of its time as Betty had creative control, hired a female director and featured an African American actor, Arthur Duncan, as a main cast member. Betty's seen here being a boss circa 1956.

Did you know Betty White was the first woman to produce a sitcom? Yep, she starred on and produced "Life with Elizabeth" from 1953 until its end in 1955 — the same year she was elected as the honorary Mayor of Hollywood. Betty's seen here riding in the Los Angeles Christmas Parade in 1955.

Betty White married "Password" host Allen Ludden in Las Vegas in June 1963. This was actually her third marriage — she was briefly wed to agent Lane Allen from 1947 to 1949 and before that was married for less than a year to Army pilot Frederick Barker. Upon tying the knot with Allen, Betty became a stepmom to his three kids from a prior relationship. The couple are seen here following their wedding at the Sands Hotel.

In 1973, Betty White joined the cast of "The Mary Tyler Moore Show" during the fourth season. She played Sue Ann Nivens on the popular sitcom. Her performance earned her her first Emmy Award…

Next up? "The Betty White Show" starring Betty, John Hillerman and Georgia Engel (seen here), who also starred on "The Mary Tyler Moore Show." It debuted in 1977 and was canceled after just one season.

Betty White's husband, Allen Ludden, tragically passed away from stomach cancer in 1981. After his death, Betty never remarried, and in 2011 famously told journalist Anderson Cooper why: "If you've had the best, who needs the rest?" Betty and Allen are seen here in 1978, just a few years before his death.

Betty White — seen here with "Jeopardy!" host Alex Trebek in 1982 — was known as the "First Lady of Game Shows" by the '80s after appearing on dozens of different competition shows as a host or player. She even picked up her first Daytime Emmy Award in 1983 for hosting the game show "Just Men!"

Time for "The Golden Girls"! In September 1985, Betty White debuted in her biggest role yet — ditzy but sweet Rose Nylund on NBC's hilarious sitcom "The Golden Girls." The series portrayed four older women (played by Betty, Estelle Getty, Rue McClanahan and Bea Arthur) all living as roommates in a home in Miami. The show was a smash hit and Betty earned an outstanding actress in a comedy series Emmy nomination for all seven seasons.

Betty White has been a vocal advocate for animal rights for decades. She's seen here with pals Whoopi Goldberg and Bea Arthur at Alpo's Actors & Others for Animals Celebrity Fair in 1987. She's also served on the board of directors of the Greater Los Angeles Zoo Association and as a trustee for the Morris Animal Foundation. She also published a book about animals, "Betty White's Pet-Love: How Pets Take Care of Us," in 1983.

Betty White's second book — "Betty White in Person" — came out in 1987. Real-life BFF Lucille Ball was on hand to celebrate at a book event that same year.

A year after the last episode of "The Golden Girls" aired in 1992, Betty White was back on the small screen. This time, she co-starred with Bob Newhart on the second season of his sitcom "Bob." She played his new boss, Sylvia Schmitt.

Time for another Emmy! Betty White snagged a best guest actress in a comedy series statuette in 1996 for her performance on "The John Larroquette Show."

Aside from landing major roles on television, Betty White also landed some big film roles in the late '90s. She appeared alongside Bruce Willis and Michelle Pfeiffer in 1999's "The Story of Us," seen here. She also starred in 1998's "Dennis the Menace Strikes Again" and "Hard Rain."

One of Betty White's most beloved roles came later in her career. In 2009, she starred alongside Sandra Bullock and Ryan Reynolds in the romantic comedy "The Proposal." She played Ryan's grandmother in the film and stole the show with her comedic talents.

Here's a fun fact about Betty White: Her fantasy job early on was to be a forest ranger — but at the time, women weren't allowed to hold the position! In 2010, the USDA Forest Service honored her dream and made her an honorary forest ranger.

"Hot in Cleveland" debuted in 2010 starring Betty White, Valerie Bertinelli, Jane Leeves and Wendie Malick. The TV Land sitcom was wildly successful — it ran for six seasons — and centered around former Los Angelenos who'd resettled in Cleveland, Ohio, alongside Elka (Betty's character), a caretaker at the home they lease. The show would end up being a critical darling as well, earning Betty her next big award…

Live from New York! Betty White's 2010 episode of "Saturday Night Live" was so hilarious, she earned an Emmy for it! Yep, the actress took home the outstanding guest actress in a comedy series award at the Primetime Emmys thanks to her funny work on the show.

Betty White shared the screen with fellow big names Kristen Bell and Jamie Lee Curtis in 2010's "You Again." The comedy wasn't a hit with critics but once again showed off Betty's comedic talents, this time playing Grandma Bunny.

In 2011, Betty White's performance on "Hot in Cleveland" earned her a Screen Actors Guild Award! She would go on to win it one more time in 2012.

Grammy winner Betty White! The star took home a Grammy in 2011 for best spoken word recording for the recording of her book "If You Ask Me (And of Course You Won't)." She's seen here at an event that same year.

Betty White celebrated her 90th birthday in style — with a television special! In January 2012, NBC aired "Betty White's 90th Birthday Party" the day before her birthday. The special included a message from President Barack Obama and plenty of cameos from her former co-stars. She's seen here at a party celebrating the show.

In 2015, Betty White was bestowed a lifetime achievement award at the Daytime Emmys. She sweetly accepted the award and told the audience, "When I started in 1949 I had no idea that I'd still be around at this point, for one thing, or that I'd still be privileged enough to still be in this business. And it is such a privilege."

Another big achievement! In 2015, Betty White won the TV icon prize at the People's Choice Awards.

In 2018, Betty White returned to the Primetime Emmy Awards. With eight Emmys and 24 nominations to her name, the star received a standing ovation during her appearance on stage. This marked her last public appearance, though professionally she has since lent her voice to "Toy Story 4" in 2019. 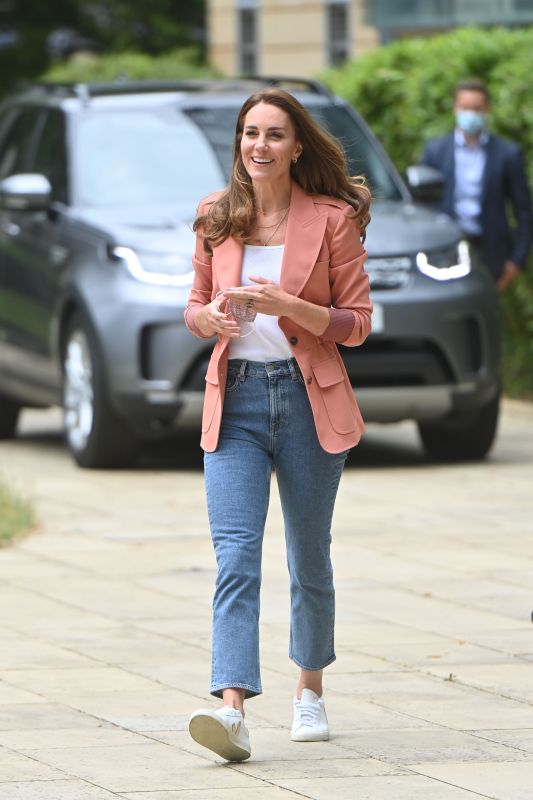