From "The Wolf of Wall Street" to "Once Upon a Time in Hollywood" and everything in between, Margot Robbie has solidified herself as one of the most talented actresses in the industry. To celebrate the release of her new movie "Bombshell," which opens wide on Dec. 20, 2019, Wonderwall.com has put together a list of fun facts to help you get better acquainted with the star. Keeping reading to learn more…

While her arsenal of American roles might suggest otherwise, Margot Robbie is actually Australian. The Academy Award-nominated actress was born in Dalby, Queensland, on July 2, 1990, and at 17 moved to Melbourne, which is where she began her acting career with roles in independent Australian films. (First, she graduated from Somerset College, a private high school near Gold Coast where she studied drama.) Before moving to the United States, she played Donna Freedman on "Neighbours" (pictured), a popular Australian soap opera on which many other notable Aussies have appeared (Chris Hemsworth, Heath Ledger and Naomi Watts, to name just a few).

2. She was a sandwich artist

Margot Robbie knows the value of hard work! Before launching her successful acting career, she was a skilled sandwich artist at a Subway in Melbourne, Australia. Coincidentally, just months after she booked her first major role, the popular food chain actually hired her to act in one of its commercials. With her experience as a sandwich connoisseur, we're sure she nailed the part. Margot also worked in retail and as a bartender before scoring her big break.

3. As a kid, she had a different career path in mind

Margot Robbie didn't always want to be an actress. "When I was little, I wanted to own hotels/be a magician. I felt I could do both simultaneously. I don't know if that's what I'd want now," she told Buzzfeed in 2019 while she and "Mary Queen of Scots" co-star Saoirse Ronan interviewed one another. If she wasn't an actress? "I'd need to work on a film set in some capacity — I'd miss that too much," she explained, "but I'd love to work in pyrotechnics or special effects. That'd be pretty rad."

4. She was a total metalhead

Critically acclaimed actress, sartorial inspiration and metalhead? It's true — Margot Robbie is a triple threat. She's gleefully gone on record to confirm that she loves the rock genre and is a particularly massive fan of Metallica, Silverstein, Bullet for My Valentine and Slipknot. While visiting "The Tonight Show with Jimmy Fallon," Margot recalled how her music obsession was the basis for some major fashion inspo back in the day. "I had a real heavy metal phase when I was 14 and I dyed my hair black and I only cut it with a razor blade and I only wore band shirts and only listened to the heaviest of heavy metal," she explained. A teenage Margot with the 'tude of a heavy-metal rocker? Now that's something we'd love to see.

5. She's married to a director and producer

Margot Robbie and British director-producer Tom Ackerley married in December 2016 in Byron Bay, Australia, after going from friends to lovers. In an interview with ELLE, Margot revealed that she and Tom — who met on the set of the WWII drama "Suite Francaise" in 2013 (she acted in it, he was an assistant director) — were actually housemates before they fell for each other, something they kept from their roomates at first. "We kept it a secret. Because we weren't really taking it seriously. 'Oh whatever, we're just mates, we're just mates.' And then… everyone found out," she explained. "It was dramatic. I'm not going into the details, but s— hit the fan. Our house turned into 'The Jerry Springer Show' for a moment there. But then the dust settled, and it was all good."

6. She sleeps with the same stuffed bunny she's had since childhood

During a late-2019 interview for W Magazine's "Five Things with Lynn Hirschberg" podcast, Margot Robbie revealed that every night, she sleeps with a stuffed bunny she's had since she was born. "[My husband] always throws Bunny out of the bed because he obviously thinks it's a tad ridiculous that I still sleep with Bunny. Maybe he's a little jealous that Bunny always gets priority place in the bed. He thinks I'm asleep and he'll throw Bunny out of the bed and I get so cross with him," she said.

7. She has her own production company

A power couple indeed! Aside from being a definite It couple, Margot Robbie and hubby Tom Ackerley are the founders of a production company with Josey McNamara and Sophia Kerr. LuckyChap Entertainment was created in 2014 and is headquartered in Los Angeles. The company has been gaining traction since its inception, having inked a first-look deal with Warner Bros. Pictures and Warner Bros. Television (remember Margot's producer credit on "I, Tonya"?). Additional films produced by LuckyChap include "Terminal," "Dreamland," the "Suicide Squad" follow-up "Birds of Prey," the upcoming "Barbie" movie and a "Tank Girl" reboot. LuckyChap Entertainment also produced the Hulu Original series "Dollface," which stars Kat Dennings (pictured), Shay Mitchell and Brenda Song.

8. She's one of the world's highest paid actresses

Margot Robbie was among the top 10 highest paid actresses in 2019, according to Forbes. Her pre-tax earnings were a whopping $23.5 million, landing her at No. 8 — the first time she's made the magazine's annual money list. While Margot's acting gigs certainly contributed to her proliferation, her work as producer is also to be credited. The Aussie girl next door was in good company too: Rounding out the list were Ellen Pompeo (No. 10), Charlize Theron (No. 9), Elisabeth Moss (No. 7), Kaley Cuoco (No. 6), Jennifer Aniston (No. 5), Nicole Kidman (No. 4), Reese Witherspoon (No. 3), Sofia Vergara (No. 2) and Scarlett Johansson (No. 1).

The delightfully deranged Harley Quinn is among Margot Robbie's best known characters, and it's a role she'll be reprising in 2020's "Birds of Prey: And the Fantabulous Emancipation of One Harley Quinn." (She also developed and produced it under her LuckyChap banner.) The actress debuted as the dysfunctional villainess in 2016's "Suicide Squad," in which she starred alongside Jai Courtney, Joel Kinnaman, Will Smith and Jared Leto. She'll also play Harley once more in the James Gunn-directed sequel, "Suicide Squad 2," which is slated for a 2021 release.

10. She has experience using a tattoo gun

In 2016 while filming "Suicide Squad," Margot Robbie brought in a tattoo gun she purchased off eBay. Consequently, she and co-star Cara Delevingne ended up giving each other tattoos — on their feet! In an interview with late night host Stephen Colbert, the "Once Upon a Time in Hollywood" star confirmed that she's inked 26 tattoos, though convincing people to agree was initially a struggle. "Well, at first I had to really beg people, and then it kind of became a thing," she explained. "People ask me now, they're like, 'Oh, I'll get one, that would be funny.'"

11. Jared Leto gifted her a rat that she turned into a pet — and later gave to a famous filmmaker

Margot Robbie's "Suicide Squad" co-star Jared Leto sent cast members some rather peculiar gifts while in character as the Joker, and the one she received was quite alarming — a real-life rat! "At first I thought this was disgusting," she shared with late night host Jimmy Fallon. "But then after that… I was like, I'm not going to kill him. So I ended up keeping him as a pet. I ended up getting him like, a sweet little playpen, a slide, a hammock and a leash because I wanted to take him to set and walk him around… But then our landlord at the place I was staying at found out." Co-star Jai Courtney cared for the rodent for a week but he was eventually re-homed with an Academy Award-winning filmmaker who lives in the city where "Suicide Squad" was shooting: Guillermo del Toro! "The rat is living with us in Toronto and he… provide[s] the house with great cheer and joy! We have re-named him Venustiano," the animal lover told Collider in 2015 — a year before he shared this photo with his adorable pet on Twitter. We love a happy ending!

When she's not stunning in high-end fashion brands or dressed in exceptional period costumes, Margot Robbie can sometimes be seen in a hockey jersey. She's been photographed on more than one occasion behind the plexiglass at Madison Square Garden rooting for the New York Rangers. She was even briefly on an amateur hockey team (she played right wing) when she came to America after previously playing field hockey in Australia. In an interview with W Magazine, the "Wolf of Wall Street" actress disclosed that while she might not be the strongest skater, playing hockey is something she really enjoys. "I don't want to be misleading and make you think I'm really good at ice hockey," she shared. "I'm terrible, but I really like it." Looks like we can add hockey player to her list of talents!

13. She's been nominated for multiple awards

Margot Robbie is certainly no stranger to acclaim and already has an impressive roster of nominations. As of late 2019, Margot had amassed nine acting nods from the four major movie award shows — think Oscars, Golden Globes, Screen Actors Guild Awards and BAFTAs. The most prestigious of all was her 2018 best actress Oscar nomination for her performance in "I, Tonya" — a film she also produced.

14. Her "acting idol" is another Australian

Margot Robbie greatly admires fellow Aussie Cate Blanchett's career and in 2019 told Buzzfeed that Cate was her "acting idol." Margot first confessed that she looked up to Cate back in 2014 right as her breakthrough film — "The Wolf of Wall Street" — came out. "There is not one person that I've looked at and thought, 'I want to be like them,' " she told The Sydney Morning Herald. "But I like the choices Cate Blanchett has made. She's not someone who's always in the tabloids. Her personal life remains personal and that's something I want to strive towards."

15. She loves fashion and fronts a major brand

If given the opportunity to raid margot Robbie's closet — trust us — we would. Often styled in garments from a plethora of legendary fashion houses like Versace, Valentino, Gucci, Celine and Alexander McQueen, Margot is a certified sartorial muse. She's been a fashion ambassador for the iconic Chanel brand since 2018 and was also unveiled as the face of their newest fragrance, Chanel Gabrielle Chanel Essence, in 2019. Her style is the perfect balance of casual and couture, and she's proven herself to be a true trendsetter when it comes to her ensembles. There's no doubt about it — this Aussie exudes effortlessness as both an actress and fashionista.

16. She was pressured to quit acting

A world where Margot Robbie isn't a mega-talented, A-list actor? Count us out. In a 2018 interview with British Vogue, she shared how, in the past, her family was never quite onboard with the whole acting thing and wanted her to quit. "My family has no connection to the entertainment industry whatsoever," she said. "So when I started acting, everyone was like, 'That's fun, but when are you going to actually get a real job?'" Thankfully, the "I, Tonya" leading lady stuck with it! 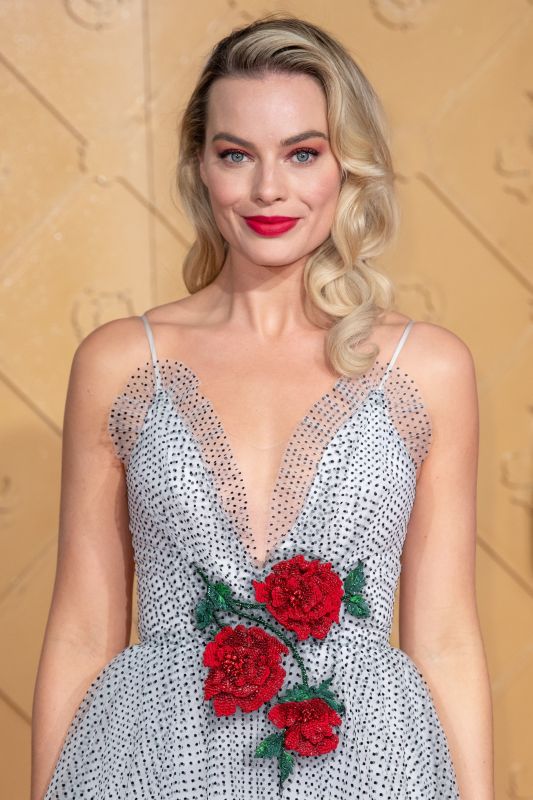 Up Next 'Bombshell' alert