Did you know some royals have day jobs? Yep, though many have a title, some members of royal families around the world also work just like the rest of us! From lawyers, authors and furniture designers to hospital aides and yoga teachers, Wonderwall.com is rounding up the surprisingly normal jobs of the aristocracy, starting with this fit British royal… Arthur Chatto — the grandson of Britain's Princess Margaret and son of Lady Sarah Chatto — has a surprisingly normal day job. The University of Edinburgh student works as a personal trainer in Scotland, reportedly at the BoundFitness gym in the Scottish capital.

Princess Beatrice of York is employed at a software company. After graduating from Goldsmiths, University of London with a degree in history, this British royal had her fair share of regular 9-to-5s. She started out working at Sony Pictures Entertainment as an analyst and these days is a vice president of partnerships and strategy at Afiniti, where she's known as Beatrice York.

RELATED: Succession to the British throne: The top 28 royals in line

Prince Nikolai of Denmark has a glamorous day job. The royal is a model! And not just any model — he's worked in the high fashion world, most recently walking for Dior in 2020.

Before marrying Prince Carl Philip of Sweden in 2015, Princess Sofia was a reality TV star. But just because she's now a royal doesn't mean she's stopped working. She simply shifted gears. During the coronavirus pandemic, she completed an intensive training program at Sophiahemmet University College in Stockholm and began taking volunteer shifts at Sophiahemmet hospital where she assists hospital staff with non-medical tasks such as cleaning and cooking.

Princess Margaret's daughter, Lady Sarah Chatto, is a talented artist. The aristocrat — whose father was photographer Antony Armstrong-Jones, 1st Earl of Snowdon — exhibits her work under the name Sarah Armstrong-Jones and has even won awards over the years. Apart from creating art, she's also the vice president of The Royal Ballet. Sarah is also the mother of two sons who are considered by many to be among the best looking members of Britain's royal family.

Princess Margaret's grandson, Samuel Chatto, is the son of Lady Sarah Chatto and her husband, Daniel Chatto. The good-looking royal has a unique and fascinating gig — he's a sculptor who specializes in pottery. Samuel, who graduated from the University of Edinburgh and now works out of a home studio, is also a trained yoga teacher.

Though he's been stripped of his royal patronages and left his role as a senior British royal in March 2020, Prince Harry is still sixth in the line of succession. And now that he's left the U.K., he has not one but two jobs: In 2021, it was revealed he'd been working as the chief impact officer at the career, life coaching and mental health startup BetterUp, and that he was tapped to be a part-time commissioner for The Aspen Institute's study on disinformation and misinformation in the United States. Aside from those positions, Harry also runs a non-profit with wife Duchess Meghan (Archewell), plus a production company (Archewell Productions) through which they create content for Netflix, and a podcast for Spotify ("Archewell Audio").

Peter Phillips, the son of Britain's Princess Anne, attended the University of Exeter and got a degree in sports science. Since then, he's been working at sports management company SEL UK Ltd., where he's the managing director.

Princess Mary of Denmark, who's married to Crown Prince Frederik, is no lazy princess. She's worked in real estate and advertising and even has a combined degree — a bachelor of commerce and a bachelor of law — from the University of Tasmania in her native Australia. She also pursued graduate studies. She met the prince at a pub in Sydney while he was in town for the 2000 Olympics.

Charlotte Casiraghi, the daughter of Monaco's Princess Caroline (who through marriage later became Princess of Hanover), has explored multiple careers. Charlotte, who's 11th in line to the Monegasque throne, has been a model, an equestrian and a published writer and magazine editor. She even founded a production company focused on equestrian films, Swoon Productions.

A lawyer prince? He exists! Prince Constantijn Christof Frederik Aschwin of the Netherlands is fourth in line to the Dutch throne but studied to become a lawyer and has worked for the RAND Corporation Europe in Brussels since 2003. He's seen here with his wife, Princess Petra.

Princess Martha Louise of Norway is fourth in line to the Norwegian throne and a published author. She's written five books including a children's book titled "Why Kings and Queens Don't Wear Crowns."

Princess Margaret's son — David Armstrong-Jones, 2nd Earl of Snowdon — has a love of furniture design. The former Viscount Linley, who previously served as chairman of the auction house Christie's UK, crafts furniture: He has his own furniture company under his professional name, David Linley.

Princess Marie-Chantal of Greece is not just a real-life princess. She has another dreamy title too — clothing designer. The royal has her own children's clothing line called Marie-Chantal.

Prince Amedeo of Belgium is more than just a good-looking royal. This handsome gent straight out of a fairy tale is also a hard worker — he's employed at a private bank in Switzerland, where he started in 2017. He married Italian journalist Nobile Elisabetta Rosboch von Wolkenstein (with whom he's seen here) in 2014. They share a son and a daughter.

The wife of Queen Elizabeth II's cousin Prince Michael — Princess Michael of Kent — has an interesting resume. She's written seven books including a series of fiction called "The Anjou Trilogy" and works as a lecturer.

Zara Tindall's career revolves around horses. The royal — who's the daughter of Britain's Princess Anne — is an equestrian who won a silver medal in the Olympics in London in 2012 and now works in the world of horse racing. Zara is the director of the Cheltenham Racecourse.

Princess Anne is also an equestrian — and she was in the Olympics too. In 1976, she became the first member of Britain's royal family to compete when she rode her mother the queen's horse, Goodwill, in eventing after previously taking home gold and silver medals at the European Eventing Championships. 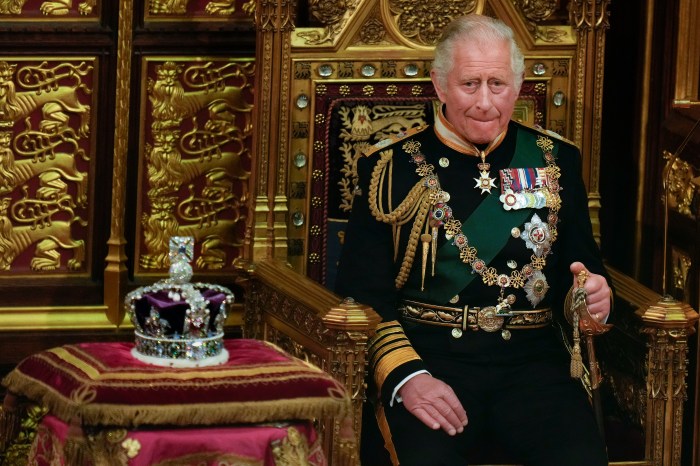 Up Next Line 'em up