Sean Penn is in Kyiv documenting Russia's invasion as it unfolds

Sean Penn was in the capital of Ukraine on Feb. 24 to film a documentary about the Russian invasion as it unfolds. "The director specially came to Kyiv to record all the events that are currently happening in Ukraine and to tell the world the truth about Russia's invasion of our country," The Office of the President of Ukraine said on Feb. 24 in a statement to Newsweek. "Sean Penn is among those who support Ukraine in Ukraine today. Our country is grateful to him for such a show of courage and honesty." The government's statement went on to praise Sean for "demonstrating bravery that many others have been lacking, in particular some Western politicians," and noted, "The more people like that — true friends of Ukraine, who support the fight for freedom — the quicker we can stop this heinous invasion by Russia." Sean reportedly visited Ukraine in November as well, when he met with members of the military, as well as deputy prime minister Iryna Vereshchuk and local reporters in preparation for making the doc, according to Variety and Newsweek. On Thursday, he was photographed listening to government press briefings. President Volodymyr Zelenskyy has likened Russia's 5 a.m. invasion to Nazi Germany's wartime behavior, and has declared martial law amid explosions and airstrikes, according to reports.

Kim Kardashian is hitting back at her ex, Kanye West's attempt to block her divorce request. In new papers filed on Feb. 23, Kim's lawyer argues Kanye's recent social media claims about Kim and their four kids indicate the rapper "does not accept" that their "marital relationship is over." Kim makes a similar argument in an attached personal statement, where she says his online antics have caused her "emotional distress," according to documents excerpted by People. "Kanye has been putting a lot of misinformation regarding our private matters and co-parenting on social media which has created emotional distress," she explains. Though she says she's asked Kanye to keep divorce-related matters private, she says "he has not done so." Her statement continues: "I believe that the court terminating our marital status will help Kanye to accept that our marital relationship is over and to move forward on a better path which will assist us in peacefully co-parenting our children." She adds that pushing the divorce back further "will only create further tension and anxiety." Her lawyer's filing also claims Kanye is trying to "rewrite the terms" of the former couple's prenup. Says Kim: "While I wish our marriage would have succeeded. I have come to the realization that there is no way to repair our marriage. Kanye does not agree but at least it appears that he has come to the realization that I want to end our marriage, even if he does not." She concludes with this request: "I ask that the Court restore me to the status of a single person so that I can begin the healing process and so that our family can begin the healing process and move forward in this new chapter in our lives." As for the prenup, in Kanye's objection to Kim's request to be declared single, he says he wants to revise how his assets will be protected and argues Kim has rejected his approach. According to ET, Kim's likely to get an answer on her single status ask at a hearing in March.

Prince Harry has filed a High Court libel claim against Associated Newspapers, the media company that publishes the Daily Mail, the Mail on Sunday and MailOnline, the BBC reported this week. Filed on Feb. 23, the claim is believed to be a response to a piece published in the Mail on Sunday, though no details have been released about the specific story he took issue with. The Duke of Sussex has made headlines recently due to his ongoing push for access to police security — on his own dime — when he visits the U.K. from his new home in Montecito, California. He was previously denied the request because he left his post as a senior working member of the royal family. Harry, whose mother, Princess Diana, was killed in a car accident while being chased by paparazzi, maintains he can't adequately protect his family without the additional security. His filing comes after Duchess Meghan was awarded a symbolic, 1-pound ($1.36) payment in damages from the Mail on Sunday after a court found the publication violated her privacy by publishing parts of an emotional letter she wrote by hand to her father after marrying Harry in 2018. She'll also be awarded an unspecified damages figure for what the court determined to be copyright infringement by the Mail.

The founder of Fenty Beauty is seeing a whole new side to what beauty can be, now that she and boyfriend A$AP Rocky are expecting their first child together. "I do feel very beautiful — it's from inside," she said in a recent interview with Refinery29, when asked. "You know that all these changes that your body is going through is because you're creating this person, this life!" the singer gushed. "And even when I'm reading all the apps and finding out what my body is doing, what the baby's doing this week, it freaks me out. Like, God does not make a mistake, everything is for a reason." Despite her pre-baby jitters, Rihanna, 34, says she loves being pregnant. "I'm enjoying it and I'm appreciating it. Everything," she says. "It's exciting. It's such a cool journey." Rihanna revealed her baby news on Jan. 29, when she stepped out with Rocky in a bump-baring Chanel ensemble in New York City. She and the rapper have been friends for years, but confirmed their romance in late 2020.

Robin Roberts will be taking some time off from "Good Morning America" to support her partner of nearly two decades, Amber Laign, as she undergoes treatment for breast cancer. Robin, who has also battled the disease, shared the news on Twitter on Feb. 24. "My sweet Amber wanted me to tell you something that she's been facing. At the end of last year, Amber was diagnosed with breast cancer," she said in a video post captioned "…a very personal message on this #ThankfulThursday 🙏🏾." Robin went on to say Amber "had surgery last month and this morning will begin chemotherapy." The anchor said Robin's prognosis is good. She also thanked loved ones for helping the couple maintain privacy around Amber's diagnosis. "She and I have been together almost 17 years and have helped each other through our challenges like my journey with cancer," Robin said in the clip, referencing her 2007 diagnosis. "It's my turn now to be there for her like she was for me." She added. "We know many, many are facing cancer and other challenges. Like my mama said, 'Everybody's got something.' Please know that you are in our prayers and hopefully we're in yours too. Blessings to all."

After 18 seasons, Dr. Meredith Grey still doesn't really watch her own show. While chatting about "Grey's Anatomy" and its 392 episodes with Martha Stewart on her "Tell Me With Ellen Pompeo" podcast, Ellen admitted she not only doesn't tend to watch the shows, she's "not even close" to remembering many episodes. "I haven't really seen most of them, I've watched only a handful. The few times I've directed, I went back and watched some old episodes," she said on the Feb. 23 podcast (via E! News). She later explained the reason she skips watching and focuses on making the show. "My intention is always to keep the spirit of the early days," Ellen said. "That's really the hard work, is to try to keep that sort of DNA, which is hard but gives us a goal at least to strive for." Whatever she's doing, it's clearly working — the long-running series was recently renewed for a nineteenth season.

As Sherri Shepherd prepares to launch her own talk show, "Sherri," in the Fox time slot previously held by "The Wendy Williams Show," she says she'll continue to "emulate" her — not replace her. "She made her own path. What Wendy does, nobody can recreate — none of the guest hosts. That is specific, Wendy created that," Sherri told Andy Cohen on "Watch What Happens Live" on Feb. 23. "The 'spill the tea,' and she'd sit there and be like, 'You know what I'm talkin' about,'" Sherri continued, smiling. "So I love that, and I love her fearlessness, and that is something that I want to emulate and keep going. She opened up a lot of doors, and she's up there with the greats." Sherri's new show was announced this week, with the production company behind it suggesting they'd happily work with Wendy again, as her health allows. The longtime talk show host has been struggling with multiple health challenges since she recovered from COVID-19, including Graves disease and a thyroid condition she was previously diagnosed with. Sherri took over as guest host of Wendy's show in November, sparking a strong ratings bump. During a recent taping of "The Wendy Williams Show," Sherri told the audience she wanted to clarify, "all these crazy stories online about me replacing Wendy, and I am here to tell you that that is not true because no one can replace the queen — nobody." She added, "And trust me, I am not trying to at all."

Sharon Stone just helped "two lovely people" kick off their "happily ever after" together. The actress shared a photo on Instagram on Feb. 23 that showed her dressed in white beneath a white flower-covered arch while officiating a wedding on a beach. Two grooms — one clad in a black tux and one in white — stand on either side of her in the shot, which appears to have been taken by a guest. "Lucky me: I got to marry two lovely people today❣️," she wrote alongside the sweet snap, leaving the names of the newlyweds private. "It was a beautiful ceremony. Got teary eyed more than once. You were a great officiant. 🥰❤️🥂🍾," one commenter replied. Another joked, "I would give one of my fingers to have Sharon Stone officiate my gay wedding. 🤎🤎🤎." According to People, Sharon actually has officiated at least one same-sex wedding prior to this. She reportedly married Anthony Cenname, the former publisher of WSJ Magazine and a friend of Sharon's since the '90s, and fashion designer David Witkewicz in 2015. 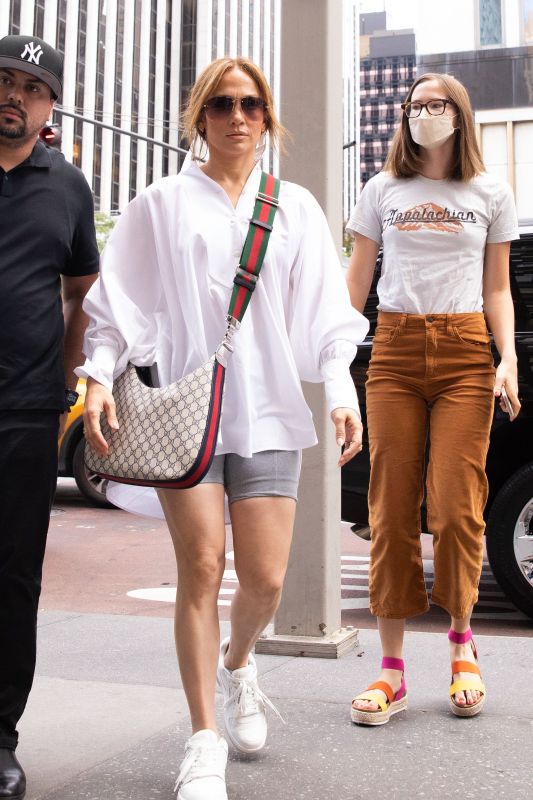 Up Next Big Debut!