The holidays are upon us and we can't think of a better time to run down our favorite New Year's movies! In celebration of 2020, Wonderwall.com is exploring our top NYE films, starting with "When Harry Met Sally." The 1989 rom-com focuses on two friends, played by Meg Ryan and Billy Crystal, who fall in love. Their "will they or won't they" relationship culminates in a perfectly sentimental moment at a New Year's Eve party. "When you realize you want to spend the rest of your life with somebody," Harry tells Sally, "you want the rest of your life to start as soon as possible." Adorbs! Keep reading for more…

RELATED: The most unforgettable celebrity moments of New Year's past

"Trading Places," a 1983 movie starring Eddie Murphy, Dan Aykroyd and Jamie Lee Curtis, is one of Hollywood's best. On New Year's Eve, the group boards a train that also has a gorilla on board in an attempt to pull off an elaborate plan. The ensuing mayhem is guaranteed to make you laugh out loud.

New Year's Eve brings all of the ghouls, ghosts and slime in 1989's "Ghostbusters II." The surge in paranormal activity forces the mayor to call on four parapsychologists played by Ernie Hudson, Harold Ramis, Bill Murray and Dan Aykroyd who suit up and save the city once again. What a way a bring in the New Year!

"Sex and the City" has one of the most heartfelt New Year's Eve moments we've seen in cinema. Miranda is feeling alone and depressed about her separation, so best friend Carrie decides to take the subway across Manhattan to ring in the holiday with her. Elsewhere, Charlotte and Samantha celebrate NYE with their loves. So sweet!

William H. Macy's character turns a fun 1979 New Year's Eve party into a frightening experience in 1997's "Boogie Nights." After catching his wife sleeping with another man, Little Bill Thompson gets his gun, resulting in a very sad and violent start to 1980.

Tom Hanks plays a widower who shares a touching dreamed conversation with his late wife on New Year's Eve in 1993's "Sleepless In Seattle." The heartbreaking scene will definitely make you tear up, but the film's happy ending more than makes up for it.

A New Year's Eve party sparks a major transformation for Renee Zellweger's character in "Bridget Jones's Diary." After hearing some unkind words from a potential suitor, Bridget gets incredibly drunk and decides to start the New Year fresh. On New Year's Day, she begins working out, gives up smoking and starts writing in her diary — which all leads to her happy ending.

In 1995's "Money Train," New Year's Eve is the perfect night to pull off a heist. After losing his job, Woody Harrelson's character decides to rob the "money train" that transports collected fare revenue from New York City's subway stations.

Who can forget the incredible New Year's Eve scene in "The Godfather Part II"?! Al Pacino's Michael Corleone confronts his older brother after learning of his betrayal, plants a "kiss of death" on his lips and says the iconic line, "I know it was you, Fredo. You broke my heart. You broke my heart." Legendary!

"200 Cigarettes" follows several different characters on New Year's Eve in New York City in 1981. From Cindy's awkward dinner date with Jack to Monica's NYE bash, this movie has a holiday story for everyone. It also stars some of Hollywood's biggest names before they were super-famous, such as Ben Affleck, Casey Affleck, Dave Chappelle, Guillermo Diaz, Kate Hudson, Christina Ricci and Paul Rudd.

In 2002's "About A Boy," Rachel Weisz and Hugh Grant's characters share a kiss on New Year's Eve, which starts off a complicated romance. The NYE meet-cute is just one of the many adorable moments in this rom-com.

"An Affair to Remember" truly set the standard for romantic New Year's Eve moments. In the 1957 classic, Cary Grant and Deborah Kerr's characters share a perfect NYE kiss that will make the most heartless skeptic believe in love again. After acknowledging that they're both engaged to other people, the lovebirds decide to meet on top of the Empire State Building in six months if their feelings are still there.

"A Charlie Brown Christmas" might get most of the holiday glory, but 1986's "Happy New Year, Charlie Brown" is equally heartwarming. Revisit the "Peanuts" gang at their NYE party in this feel-good film.

"Ocean's 11" shows that no New Year's Eve is complete without an elaborate casino heist. The Rat Pack film — which was remade in 2001 — follows Danny Ocean and a gang of World War II veterans as they try to rob five Las Vegas casinos. Frank Sinatra, Dean Martin, Peter Lawford, Joey Bishop and Sammy Davis Jr. all shine in this 1960 classic.

In "Poseidon," the passengers on the RMS Poseidon spend their New Year's Eve fighting for their lives after a tsunami wave capsizes their ship. The 2006 disaster film (and the 1972 original) have all the thrills and scares you need.

"Sunset Boulevard" is a Hollywood classic that we love. The 1950 film focuses on a past-her-prime silent movie star who invites a struggling screenwriter to her New Year's Eve party. He's the only person who attends and their tragic connection ends with deadly consequences.

A workplace New Year's Eve celebration goes awry when a criminal gang attacks a police precinct in "Assault on Precinct 13." The 2005 action movie isn't a traditional holiday flick, but its thrilling scenes are sure to leave you on the edge of your seat.

No New Year's Eve movie list would be complete without 1960's "The Apartment." The film features one of Hollywood's very best NYE scenes: Shirley MacLaine's character leaves a New Year's Eve party to be with the one she loves. After confessing their feelings to one another, the pair forgo a fancy party to stay at home and play cards. Perfect!

Another Old Hollywood gem that has a New Year's Eve focus? "An American in Paris." This 1951 flick features Gene Kelly (left) and two other actors — Georges Guetary and Oliver Lavant — going after the same Parisian woman, played by Leslie Caron (right). This Academy Award-winning flick features a pretty stellar New Year's Eve party that puts every one we've ever been to to shame! 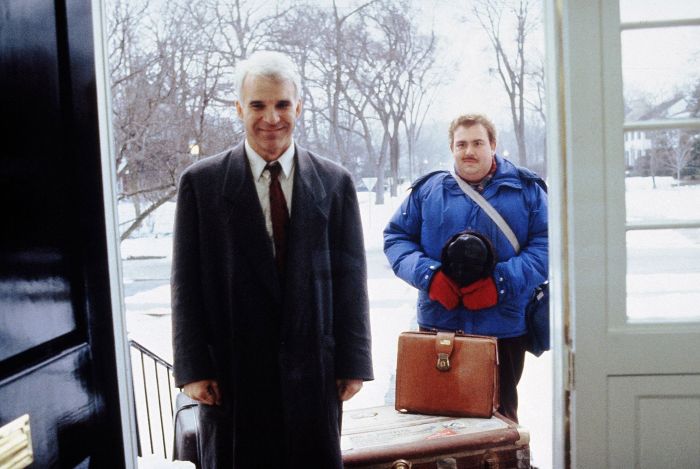 Up Next Give Thanks!