Feel like you've seen just about every show on your personal watchlist? Allow us to provide you with a new set of television series from across the pond that are sure to suck you in. Join Wonderwall.com as we take a look at 16 of our favorite British series to stream… starting with this comedic drama… Phoebe Waller-Bridge stars as the titular character on "Fleabag," a series about a sarcastic, dry-humored woman who struggles to navigate life in London while struggling to cope with a tragedy. The two-season series, which is based on Phoebe's 2013 one-woman show of the same name, earned six Primetime Emmy Awards including outstanding lead actress and outstanding writing for a comedy series.

"I May Destroy You," the drama created and led by Michaela Coel that debuted in 2020, follows Arabella, a woman who, after being sexually assaulted at a nightclub, is forced to reassess life as she knows it — from her career to her friendships — as she struggles to come to grips with what happened to her. All 12 episodes of the London-based BBC One series are available to stream on HBO.

We'd be surprised if you haven't heard of this one. "Bridgerton," the latest Shondaland series — and her first scripted series for Netflix — chronicles the juicy personal lives of eight siblings from the aristocratic Bridgerton family during England's Regency era. The period drama — which is based on Julia Quinn's novels — premiered to immense buzz in late 2020 and was quickly renewed for a second, third and fourth season. Regé-Jean Page and Phoebe Dynevor (pictured) were among the sexy, scandal-filled series' season 1 leads.

Having a mom who doesn't respect your privacy as a teenager makes for a less than ideal home life. Add in the fact that she's a sex therapist who often has suitors coming in and out of the house? Yeah, that's a rough one. "Sex Education" stars Asa Butterfield as Otis Milburn, an incredibly awkward teen who teams up with bad girl Maeve Wiley (Emma Mackey) and begins to offer sex advice to his classmates — for a price, that is. What Otis lacks in personal experience (which is everything, by the way), he makes up for thanks to living with and being raised by a sex therapist mum!

"The Crown" on Netflix

We, like so many, seem to have an unexplainable fascination with the British royal family, and Netflix's "The Crown" lets us indulge our curiosity. While the show on the whole delves into the reign of Queen Elizabeth II, its fourth season, which debuted in late 2020, made headlines as Emma Corrin (pictured) portrayed the late Princess Diana as her marriage to Prince Charles began to disintegrate. Season 5 and 6 are on the way.

"Luther" stars Idris Elba as the titular extraordinary but self-destructive detective who relies on impulsivity to track down murderers around his city. The job, however, proves to be emotionally taxing, and Luther begins to struggle with finding a balance between the demands of his professional life and the unspoken complexities of his personal life. The psychological crime-drama, which debuted in 2010, earned Idris several accolades including Golden Globe and Screen Actors Guild Awards.

"Broadchurch," which ran from 2013 to 2017, chronicles the experiences of Detective Inspector Alec Hardy (David Tennant) and Detective Sgt. Ellie Miller (Olivia Colman), who begrudgingly join forces to investigate the gruesome murder of a young British boy found dead on an unassuming beach in the community of Broadchurch. However, when a suspect is brought in for the crime, the individual threatens to reveal shocking truths about fellow Broadchurch inhabitants.

"Peaky Blinders" takes place in Birmingham, England, and chronicles the escapades of the Shelby crime family following the events of World War I. The British period drama, which stars Cillian Murphy as family boss Tommy Shelby, will end after its sixth season, which will be followed by a movie.

We love a story about a pair of misfits! Based on the Charles Forsman comic book series, "The End of the F****** World" follows two teenagers — James and Alyssa (Alex Lawther and Jessica Barden) — who bond over their mutual disdain for those around them. James, a self-proclaimed psychopath who enjoys killing animals and has set his sights on an even larger target, embarks on a journey with Alyssa to locate her estranged father. Violent, dark and incredibly well-acted, the series — which ran from 2017 to 2019 — earned a British Academy Television Award for best drama series.

On "Killing Eve," Sandra Oh stars as the titular Eve Polastri, an MI5 security agent whose monotonous professional life undergoes a drastic shift when she's tasked with apprehending Villanelle (Jodie Comer), a luxury-loving skilled assassin. In no time, both women become obsessed with tracking each other down. "Killing Eve," which debuted in 2018, earned a Golden Globe Award for Sandra, an Emmy for Jodie and plenty more nominations. Another reason it's so good? Phoebe Waller-Bridge and Emerald Fennell have both served as head writers.

"Top Boy" explores the interpersonal dynamics between members of drug gangs in East London and stars Ashley Walters as Dushane, a young drug dealer who strives to become the "top boy" in his area. The British crime series, which debuted in 2011, was reprised on Netflix in 2019 after Drake showed interest in becoming one of its executive producers.

"Collateral" stars "Promising Young Woman" actress Carey Mulligan as Kip Glaspie, a detective inspector tasked with investigating the murder of a pizza delivery man. Convinced the event was not random, Kip becomes enthralled in unraveling the truth behind his death and begins to unearth a dangerous, darker side of the city she calls home. The police procedural, which consists of four parts, debuted in February 2018.

What happens when, on your journey to find the love of your life, you accidentally contract a sexually transmitted disease that requires you to inform every partner you could have possibly infected? "Lovesick" explores this less than ideal scenario. The audience joins protagonist Dylan Witter (Johnny Flynn) as he revisits each of his partners along with defining moments of those relationships. "Lovesick," which also stars Antonia Thomas, Daniel Ings, Hannah Britland and Joshua McGuire, ran for three seasons from 2014 to 2018.

From envisioning an alternate universe in which individuals have access to a memory implant in their brains to being paired off in a systematic dating algorithm, "Black Mirror" explores it all. The dystopian Charlie Brooker series, which ran from 2011 to 2019, provides social commentary on the pitfalls and tribulations of living in a technologically savvy age.

Who doesn't love Benedict Cumberbatch? The Marvel Cinematic Universe actor stars on "Sherlock" as the titular unorthodox detective Sherlock Holmes, an exceptional man who teams up with Dr. John Watson (Martin Freeman) in an effort to uncover a series of crimes and mysteries around them. The crime series, which was based on the Sherlock Holmes stories by Sir Arthur Conan Doyle, ran from 2010 to 2017.

While we've come to adore Steve Carell as Dunder Mifflin boss Michael Scott, the original British version of "The Office" holds a particularly special place in our hearts — namely because it's the show that started it all! On the mockumentary-style British series, which ran from 2001 to 2003, Ricky Gervais starred as chaotic boss David Brent whose workplace consists of an eclectic group of employees who tolerate his unprofessional behavior because their jobs depend on it. 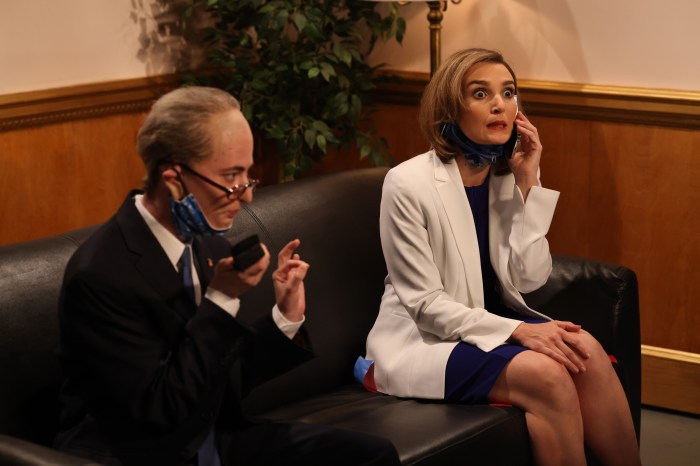