The man who allegedly plotted to blackmail Kevin Hart over a sex video has been criminally charged with extortion. And the culprit cops have named, Jonathan Todd Jackson, is one of Kevin's closest friends. "Mind blown … Hurt … at a loss for words and simply in complete disbelief at the moment. WOW," Kevin tweeted on May 2 after learning the identity of his alleged extortionist, who was charged with attempted extortion and extortion by threatening letter, both felonies. Last September, Kevin was caught in the middle of a cheating scandal when it emerged that he was allegedly unfaithful to his then-pregnant wife while he was in Las Vegas. A video purporting to show Kevin having sex was secretly recorded last summer. Prosecutors say Jonathan tried to get money out of Kevin in return for keeping the video secret. TMZ reported that Kevin and Jonathan, who goes by JT, have been very close for 15 years. JT, an actor, was in "S.W.A.T." and Kevin's film "Think Like a Man Too."

Kanye West revealed that he became addicted to opioids after having liposuction. "Two days before I was in the hospital I was on opioids," he said during a bizarre interview on "TMZ Live" on May 1. "I was addicted to opioids. I had plastic surgery because I was trying to look good for y'all. I got liposuction because I didn't want y'all to call me fat like y'all called Rob [Kardashian] at the wedding and made him fly home before me and Kim [Kardashian West] got married." (The rapper was hospitalized in November 2016 following a mental breakdown in the wake of several bizarre on-stage rants during his "Saint Pablo" tour.) During his lengthy appearance on "TMZ Live," Kanye also made wildly controversial comments about slavery, calling it "a choice." Later that day after he was widely criticized, he took to Twitter to further explain his remarks. Following the bizarre interview, TMZ and other outlets reported that Kanye's behavior could be due to him no longer taking his meds. As the week wound down, he flew to his mountaintop retreat in Wyoming to work on new music.

Ryan Reynolds comes off as funny and comfortable when the bright lights shine on him, but he says he actually gets nauseous before every talk-show appearance and genuinely feels like he might die. In an interview with The New York Times, the actor spoke of the crippling anxiety he still gets to this day — he's actually been struggling with it his whole life. In fact, he said he had "a little bit of a nervous breakdown" in 2016 after filming the first "Deadpool" movie. At the time, the actor thought he had a neurological problem, but doctors all told him it was anxiety. "I have anxiety, I've always had anxiety," he said. "Both in the lighthearted 'I'm anxious about this' kind of thing, and I've been to the depths of the darker end of the spectrum, which is not fun." Ryan said he's used meditation apps to help him. He also said that once it's showtime, he's usually okay. "When the curtain opens, I turn on this knucklehead, and he kind of takes over and goes away again once I walk off set," he said. "That's that great self-defense mechanism. I figure if you're going to jump off a cliff, you might as well fly."

Gigi Hadid apologized on May 3 after she was criticized for appearing with much darker skin on a new Vogue Italia cover — she was wearing so much bronzer that some considered her to be in "blackface." Gigi tried to distance herself from the shoot, posting a paparazzi pic of herself leaving the photo session. In that image, she appears like her normal fair-skinned self. "You can see the level I had been bronzed to on set that day," she wrote. "Please understand that my control of a shoot 1. is non existent [sic] in terms of creative direction 2. ends completely when I leave set, and anything done to a photo in post is out of my control fully." She went onto say that the whole thing "was not executed correctly" and that "the concerns that have been brought up are valid." Gigi added that she wanted to apologize "because my intention is never to diminish those concerns or take opportunities away from anyone else… Please know that things would have been different if my control of the situation was different." On another note, Gigi reconciled with her on-again, off-again beau Zayn Malik this week.

Gwyneth Paltrow and fiance Brad Falchuk have dotted the i's and crossed the t's… on a prenuptial agreement. According to Us Weekly, the betrothed duo "have signed off on their prenup." A source told the mag that the process was far from dramatic too. "They are very much on the same page," the source said, adding that Gwyneth and Brad have "both been married before and knew it was smart to have [a prenup]." Now all that's left is to say those two little words, "I do."

Cheryl Burke said it best on Instagram: "OMG! So far so good for 34!" The "Dancing With the Stars" alum revealed on May 3 that she and her beau Matthew Lawrence got engaged on her 34th birthday. Cheryl shared several images of her ring. Cheryl and Matthew first dated in 2007, but split after a year. The reconciled in February 2017. Of Matthew, Cheryl said, "He's such a great guy. He's so normal, considering we're in this crazy business. It's so nice to be able to come home to him and turn Netflix on and order Postmates. He's someone I definitely do see spending the rest of my life with."

Queen Elizabeth II and Prince Charles have officially met the newest royal, Prince Louis. Exactly one week after Louis' birth on April 23, the monarch met her great-grandson at Kensington Palace after flying in from Windsor on a helicopter. When she emerged from the aircraft, she was carrying a bouquet of what appeared to be hand-picked spring flowers, presumably to give to new mom Duchess Kate. On May 2, it was Prince Charles's turn to meet his newest grandson. Insiders said he chose that specific day because it was also Princess Charlotte's 3rd birthday. Prince William's father is one of the last close family members to meet Prince Louis.

Kanye West famously met with Donald Trump after he won the 2016 presidential election, and it seems wife Kim Kardashian West has a relationship with the White House too. TMZ reported on May 2 that Kim is working with two presidential advisors — Donald's daughter and son-in-law, Ivanka Trump and Jared Kushner — to try to secure a pardon for Alice Marie Johnson, a 62-year-old grandmother who's been in prison for more than two decades on money laundering and non-violent drug conspiracy charges. It was Alice's first offense. Kim has even tapped her own attorney, Shawn Holley, to help with Alice's case. Alice's file is now on the president's desk awaiting his review, TMZ reported.

Rumors of a possible pregnancy have been swirling around Blac Chyna for most of the week, but another report says she's definitively not pregnant… yet. While some media outlets (including Page Six on April 30) claimed that Chyna, 29, is expecting with her 18-year-old rapper boyfriend, YBN Almighty Jay, TMZ reported on May 2 that she is not pregnant — but wants to be. Speculation about possible baby news began in late April after MediaTakeOut reported that the former reality TV star (and Rob Kardashian ex) was rubbing her belly. She already has kids with Rob and rapper Tyga.

Russell Brand's mother, Barbara, suffered "numerous life-threatening injuries" after a car accident. Russell announced on April 30 that he was canceling his current stand-up tour to tend to his mom. "I apologize, but obviously it's circumstances beyond my control. What I realize in this situation is the importance of people you love and how often this kind of thing happens," he said in a video message posted to Twitter. "When you're in the hospital you're surrounded by people who are dealing with traumatic situations, suffering and pain — it brings you to a kind of bare and raw truth." The comedian said his mom finished chemotherapy for her sixth bout of cancer a month ago. "I'm sad for my mum because she's vulnerable. She only finished chemotherapy a month ago and for her to be in this situation already is very difficult." 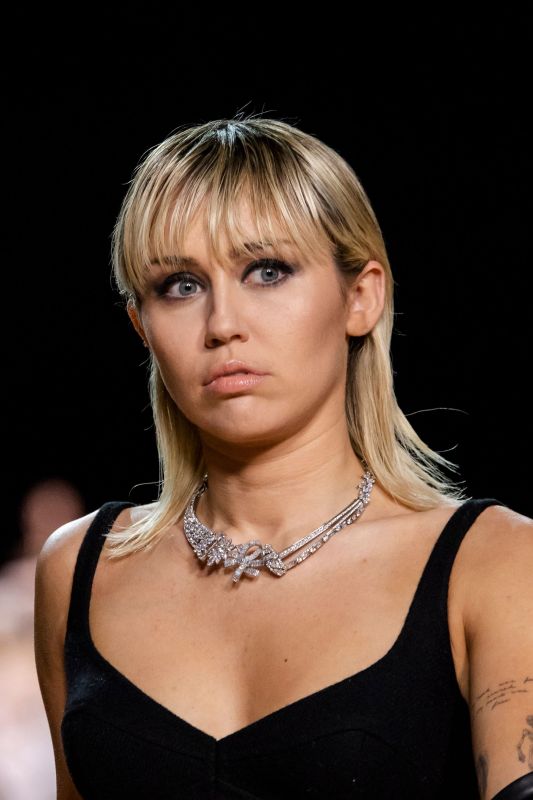 Up Next Back On The Wagon

More Wonderwall
Back On The Wagon

Ellen and Portia cuddle up while antiquing, plus more stars' kissing, hugging and hand-holding PDA this year

Check out every Taraji P. Henson look from the 2020 AMAs!

Mark Wahlberg steps out in Beverly Hills, plus more pics to see

Sing me a song

'Rent' turns 15 and more of our favorite movie musicals