On Nov. 10, 2019, the E! People's Choice Awards returns for a 45th year. In honor of the big night, Wonderwall.com is going back to 2009 to see what fashion trends were red-hot on the red carpet 10 years ago, starting with this A-lister… Reese Witherspoon played it safe in little black tiered dress and peep-toe heels in 2009 when she won for favorite female movie star. Keep reading to see the most outrageous and memorable outfits from the 2009 People's Choice Awards…

Carrie Underwood was a major winner at the 2009 People's Choice Awards: She took home the favorite star under 35 trophy, in honor of the show's 35th year. She wore a number of outfits during the telecast, including this lime green tiered gown with matching green earrings.

Lori Loughlin sparkled and glowed at the 35th Annual People's Choice Awards in 2009. The former "Full House" actress paired her deep tan with a pale, silver dress that featured an illusion neckline and subtle tiered netting along the bottom. She kept her accessories to a minimum, save for a black sparkling clutch.

At the 2009 People's Choice Awards, Kate Hudson took home the favorite leading lady award in a billowing blue gown and black hoop earrings. Get a closer look at her platform heels next…

Here's a closer look at Kate Hudson's tri-color heels in black, white and a teal blue hue that matched her loose-fitting gown. (Too bad her stylist didn't take off the white sticker residue on the bottom!)

Katherine Heigl was still on "Grey's Anatomy" when she attended the 2009 People's Choice Awards in a black pantsuit, shimmery blouse and strappy black heels. To complete her look, Katherine pulled her hair back and added a thin black headband.

Jennie Garth went for a retro look at the 2009 People's Choice Awards. The "Beverly Hills, 90210" star wore a simple black dress with short sleeves and paired it with pin curls and a red lip for a look that would work in any decade.

"Dancing With the Stars" judge Carrie Ann Inaba attended the 2009 People's Choice Awards in a brown gown with a metallic halter-style bodice. To complete her look, Carrie Ann paired her dress with copper disc earrings.

For one of Carrie Underwood's outfit changes, she went for a look that was super-bright. The country music star wore a short orange frock with heavy orange-and-yellow beading along her neckline and hemline.

Another "American Idol" alum, Jordin Sparks — who was nominated for favorite pop song that year — looked youthful in strapless blue dress. The shiny lamé frock featured a flower on the hip and a bunched skirt. The singer completed her look with gold shoes and a gold clutch.

Christina Applegate, who took home top honors in the favorite female TV star category at the 2009 show, wore a black gown that was far from basic: Christina's dress sparkled on top thanks to silver embellishments on the straps and just below her chest. She looked like a true star, finishing the ensemble with a red lip.

Malin Akerman wore a tri-color strapless minidress to the People's Choice Awards in 2009. She accessorized with black peep-toe heels and a chunky necklace and bracelet combo.

Marisa Tomei chose a knee-length strapless red dress to wear back in 2009. She accessorized with a number of thick gold bangles and a dramatic crystal and gold necklace.

Paris Hilton went for it with her 2009 People's Choice Awards look. The socialite-turned-reality star, who was nominated for favorite online sensation that year, wore a champagne-colored dress embellished with gold sequins and dazzling floral appliques.

Carrie Underwood spent much of the 35th Annual People's Choice Awards changing clothes, including into this embellished gown. The "American Idol" alum looked youthful in this bubblegum pink number, which had a multi-colored shimmery overlay. So as not to distract from the dress, Carrie opted only for subtle gold earrings.

Jennifer Morrison was all glitz and glamour in this gold-and-silver strapless dress by Gianfranco Ferre, which was open in the back.

Teri Hatcher kept it simple in a long-sleeved silky black dress at the 2009 People's Choice Awards. The "Desperate Housewives" star pulled her hair back into a low chignon, which upped the drama of the look.

Debra Messing wore a strapless gunmetal gray frock for the People's Choice Awards in 2009. She paired the dress with gold earrings and beige sky-high heels.

Olivia Wilde looked like a Greek goddess in this flowing white halter gown. The heavy gold bracelets so popular that year worked to complete this radiant look.

Brooke Burke showed off her fit physique in a dark gray slip dress at the People's Choice Awards show in January 2009. Her diamond bangles brought a necessary pop of glamour to the look.

"90210" actress Jessica Stroup wore a Herve Leger bandage-style dress to the People's Choice Awards in 2009. The one-shouldered look featured deep pink and blue colors and a vague flower embellishment brought attention to her hips. She finished the curve-hugging look off with black slingbacks.

Jewel showed off some effortless California style at the Los Angeles award show in 2009. The singer wore a flowing white-and-pink halter dress and accessorized with a metallic purse and gold bracelets.

Robin Tunney, whose show "The Mentalist" took home top honors in the favorite new TV drama category that year, wore a summery blue-and-white flutter-sleeve dress as she hit the red carpet. She kept her look bright and warm by adding a pink clutch and nude sandals.

Queen Latifah, who hosted the People's Choice Awards for the third time in a row in 2009, wore a shimmery pink-and-purple gown as she hit the red carpet. The dress also featured a heavy black beaded halter-style neckline. 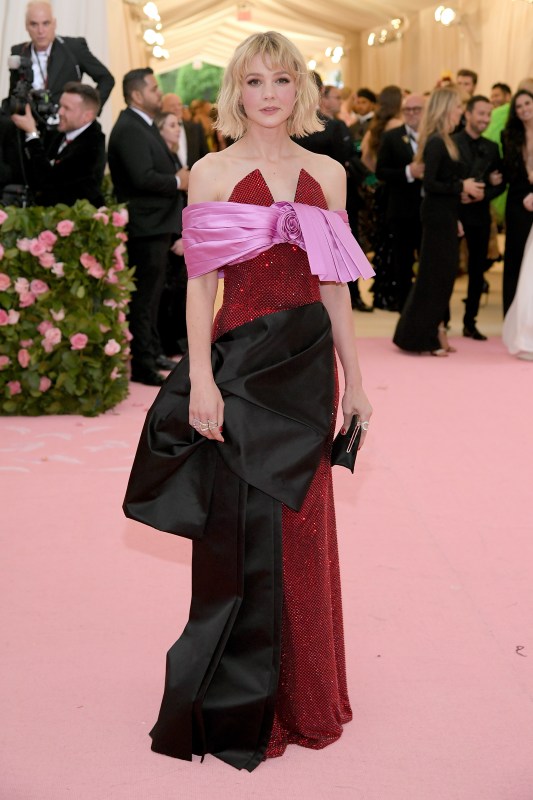