There's no doubt about it: Duchess Kate is a style icon. It seems as if there isn't a look that the former Kate Middleton has worn that hasn't either sold out or stirred up some serious envy. Now that 2016 has practically come to an end, Wonderwall.com is taking a look back at her best looks of the year, starting with the bold style statement she made during an outing in Canada on Sept. 25: Kate donned a red-and-white Alexander McQueen broderie anglaise dress and accessorized with coordinating red pumps and a Miu Miu clutch. Now keep reading for more!

RELATED: Will and Kate's romance retrospective

Duchess Kate stunned in a tailored blue Jenny Packham dress while visiting the British Columbia Parliament buildings in Victoria with Prince William on Sept. 24. Now let's get a closer look at her custom fascinator…

RELATED: Will and Kate's 2016 tour of Canada

A work of art! We're obsessed with the custom maple-leaf-adorned Lock & Co. fascinator that Duchess Kate donned in Victoria on Sept. 24.

Duchess Kate looked leggy in a long-sleeved Self Portrait dress with a thigh-high slit during the premiere of "A Street Cat Named Bob" in London on Nov. 3. She accessorized with oxblood suede pumps and a matching clutch.

Duchess Kate looked red-hot in a satin dress by British designer Preen during a reception at Government House in Victoria on Sept. 26.

Duchess Kate shocked us all by wearing printed skinny-pants from Gap while visiting the Eden Project in Cornwall, England, with Prince William on Sept. 2. She wore the bargain brand with a white top, a navy blue blazer and nude espadrille wedges.

So. Cute! Duchess Kate looked adorable in a printed Altuzarra dress while visiting Stewards Academy in Harlow, England, on Sept. 16.

Duchess Kate looked gorgeous in green in a Dolce & Gabbana dress with gold buttons and a tie at the neck during an outing in Kelowna, British Columbia, on Sept. 27.

Duchess Kate looked pretty in pink in a Lela Rose dress during an outing in Cornwall, England, on Sept. 1.

This is how Duchess Kate does casual! She wore the appropriately named green wool "Duchess" blazer by Canadian brand Smythe with a white blouse with a tie at the neck, skinny jeans and cowboy boots during an outing in Canada on Sept. 30.

Duchess Kate once again showed her appreciation for prints — this time in a light pink rose-print chiffon Kate Spade dress — during a World Mental Health Day event in London on Oct. 10.

Duchess Kate was a vision in white in a fit-and-flare See by Chloé dress during a children's party for military family members — which she attended with Prince George, Prince William and Princess Charlotte — in Victoria on Sept. 29.

Duchess Kate showed off her ability to accessorize during a visit to the Nelson Trust Women's Centre in Gloucester, England, on Nov. 4. She wore a Mulberry coat over a black turtleneck, a gray tweed Dolce & Gabbana skirt and black tights.

Duchess Kate looked lovely in a black-and-teal print L.K. Bennett dress during a children's tea party to celebrate Dippy the Diplodocus's time in Hintze Hall at the Natural History Museum in London on Nov. 22.

Duchess Kate donned a tailored Catherine Walker ensemble — a powder blue peplum jacket and skirt — while visiting the Mauritshuis museum in The Hague in the Netherlands on Oct. 11.

Duchess Kate sure knows how to pick a coat! She kept warm in a plaid Erdem coat during an outing in Manchester, England, on Oct. 14.

Duchess Kate first donned this cream brocade coat 10 years ago during the wedding of Laura Parker Bowles and Harry Lopes. She wore it again during the annual garden party at Hillsborough Castle in Northern Ireland on June 14 and topped off her look with a matching rose fascinator.

Duchess Kate made a sunny statement at Wimbledon on July 7. She joined Wimbledon chair Philip Brook and his wife, Gill, for the tournament's 10th day and recycled a bright yellow Roskanda dress for the event. Kate has worn the yellow-and-white dress before (on a visit to the Sydney Opera House in 2014), but she's still making the look shine!

Duchess Kate knows how to recycle a gown and still make it look new! She stepped out in a shimmery, light pink Jenny Packham dress for a gala dinner to support East Anglia's Children's Hospices on June 22. She previously wore the dress to one of her first engagements as part of the royal family following her 2011 wedding.

Duchess Kate was a lady in lace on July 1 when she visited the Thiepval Somme Memorial in France to commemorate the 100th anniversary of the Battle of the Somme. She paid her respects in a cream-and-black lace dress with a collar, peplum waist and three-quarter-length sleeves. She completed the look with a matching black fascinator.

Duchess Kate was a vision in white lace in this long-sleeved Dolce & Gabbana dress during day two of the Royal Ascot at the Ascot Racecourse on June 15. She complemented the dress with a gold Jane Taylor hat embellished with a cream rose and feathers. And in case you didn't recognize her, she wore a name tag that read "HRH The Duchess of Cambridge."

During the Patron's Lunch Street Party that was part of Queen Elizabeth II's 90th birthday celebrations in London on June 12, Duchess Kate wore a more casual Roksanda dress that showed off her fab figure. The blue short-sleeved look featured a wide peach band around her waist.

Duchess Kate stunned in a royal blue Roland Mouret Nansen dress with cutout sleeves and a V-shaped neckline while hosting the SportsAid 40th Anniversary Dinner in London on June 9.

Duchess Kate wore a surprisingly affordable look — a white blouse with a blue, black and white printed skirt that runs for $130 at Banana Republic — when she launched the Heads Together charity with Prince William and Prince Harry in London on May 16.

We thought the light blue ruched dress that Duchess Kate wore during Anna Freud's Centre Luncheon at Spencer House in London on May 4 looked familiar! She first donned the Roksanda "peridot" dress in Los Angeles in 2011. This time, Kate paired the classic style with nude pumps for an effortless look.

Duchess Kate dazzled in a blue sari-inspired Jenny Packham gown with a matching beaded cape at a Bollywood-themed charity gala at the Taj Palace Hotel in Mumbai, India, on April 11. She completed her look with lapis lazuli drop earrings from luxury Indian jeweler Amrapali.

On April 7, ahead of her tour of India with Prince William, Duchess Kate wore a dress by Indian designer Saloni — one of her sexiest looks yet. The blue Mary Illusion Dot Dress, which retails for $595, featured a sheer bodice and sleeves, but Kate had hers lined with nude-colored fabric to protect the royal modesty.

Duchess Kate looked like she should be on the cover of a magazine when she attended the Commonwealth Day Service at Westminster Abbey in London on March 14. She kept warm in a gray Erdem coat and topped off her look with a large gray suede hat.

Duchess Kate was pretty in pink in an Alexander McQueen ensemble when she visited the National Portrait Gallery in London on May 4.

Duchess Kate showed off her nautical style while visiting Portsmouth, England, on May 20. She looked ready to set sail in a navy Alexander McQueen skirt with slits and a white-and-navy blouse with matching gold buttons.

Lady in red! Duchess Kate looked vibrant during the Garter Service at Windsor Castle on June 13. Her coat and matching dress were made by British designer Catherine Walker. She topped off her look with a coordinating Lock & Co. fascinator.

Baby blue is hard to pull off, but not when you're Duchess Kate. When she attended the National Service of Thanksgiving to mark Queen Elizabeth II's 90th birthday in London on June 10, Kate wore a pastel blue Catherine Walker coat dress featuring white lace appliqué. If her white hat with flowers looks familiar, it's because it's the same one she wore during Princess Charlotte's christening in 2015. The hat was made specifically for Kate by Jane Taylor.

Red just may be the best color on Duchess Kate! She stunned in a red floral look during a reception celebrating the friendship between England and Bhutan at the Taj Hotel in Thimphu, Bhutan, on April 15. She wore the Beulah dress as a tribute to Bhutan — it features the country's national flower, the poppy.

Duchess Kate donned a red and blue dress while meeting with President Barack Obama and First Lady Michelle Obama at Kensington Palace in London on April 22. Her L.K. Bennett Addison-style printed silk dress with sheer sleeves retails for $468. Always one to match, she paired it with blue suede heels.

Duchess Kate donned a blue-and-white embroidered dress by American-Indian designer Naeem Khan during her visit to the Taj Mahal in India on April 16. "This is my happiest morning," Naeem told the Telegraph of what it meant to have Prince William's wife wear his creation. "My son got married last night and the Duchess of Cambridge wears Naeem Khan in India. I am in heaven."

Duchess Kate wore an embroidered Topshop dress that retailed for $140 — but is now sold out, of course! — while visiting Panbari Village in India with Prince William on April 13. She paired her bargain buy with black wedges.

Duchess Kate stole the spotlight in a jade green Desdemona dress when she and Prince William met with Prime Minister Narendra Modi of India on April 12. The look featured sheer sleeves and lace detailing.

Duchess Kate can pull off many colors — and many colors at once! She wore a multi-hued embroidered tulle gown by Tory Burch during a dinner with Prince William and the king and queen of Bhutan in Thimphu, Bhutan, on April 14.

Even a dress with birds on it looks fancy on Duchess Kate. On March 10, she donned a frock from London-based designer Jonathan Saunder during a screening of the #FindMike campaign documentary at Kensington Palace in London.

She may only be a duchess, but she's the queen of garden parties — and of making her clothes look brand new! Duchess Kate wore her beloved green Catherine Walker dress (again) during the Chelsea Flower Show in London on May 23. She previously wore it in Australia in April 2014. Kate completed the look with her favorite nude pumps and a matching L.K. Bennett clutch. 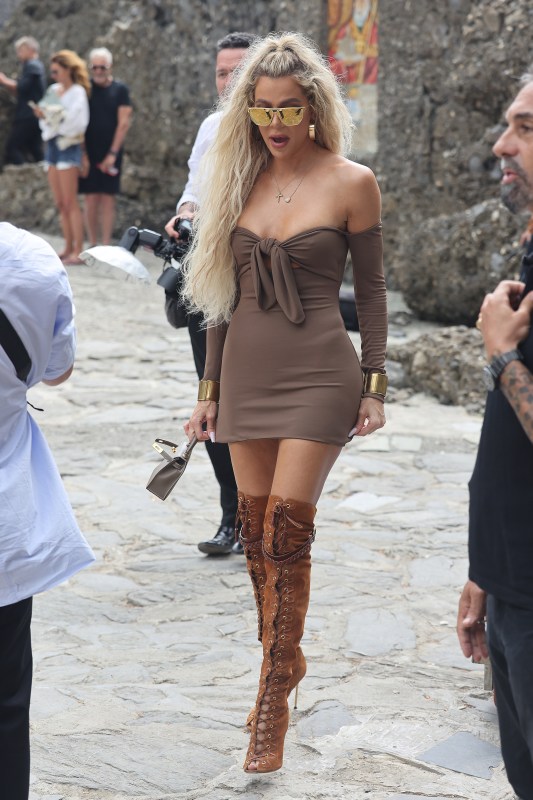 Up Next Wedding weekend