Another week, another batch of romance updates! Matt Lauer's wife, Annette Roque, is getting her ducks in a row following his "Today" firing amid a sexual misconduct scandal. According to a Dec. 20 report from Page Six, the Dutch former model has been meeting with lawyers — she was seen heading into New York City law firm Latham & Watkins the same day — to discuss the possibility of getting a larger settlement if she divorces Matt in the wake of fresh cheating allegations. "The post-nup will likely specify how much Annette would get if they divorce, but she is expected to challenge it given Matt's earnings since 2006, and given how he has humiliated her," a source told Page Six. (Before his termination, Matt — a 20-year veteran of "Today" — was reportedly pulling in $25 million a year.) "There are also issues over all the property and land they own, both in the Hamptons and abroad." Earlier in December, Page Six reported that Matt and Annette — who filed for divorce back in 2006 while pregnant with their third child before withdrawing her petition weeks later — have been living separate lives for years. Her father recently told DailyMail.com that the couple's marriage is essentially over. "She is not going to stay with him and work it out," Henri Roque said. Now keep reading for more celeb love life updates this week…

Romance confirmed! In November, a source told E! News that Janet Jackson and old flame Jermaine Dupri were reconnecting and "getting close again" in the wake of her divorce from Wissam Al Mana earlier this year, but now things seem to be more serious. At a party in Atlanta on Dec. 17, the singer was spotted holding hands and cuddling up to Jermaine, her former beau of seven years. (They're seen together here at the Grammys back in 2005.) A source told Us Weekly, "They are 100 percent back together and in love."

Is Richard Gere engaged? Speculation that the actor and his girlfriend, Alejandra Silva, are set to marry emerged after the the Spanish socialite was spotted sporting a ring on THAT finger. The duo was snapped at the Dec. 11 screening of "La Cena" in Madrid looking happy and in love and making no attempt to hide the ring. Richard's reps have previously denied that the couple were engaged. Richard and Alejandra began dating in 2014 but didn't go public with their relationship until November 2015. Congrats if it's true!

On Dec. 21, Prince Harry and Meghan Markle released three gorgeous engagement photos to the public. On Instagram, the royals released the pictures with this statement: "Thank you so much for all of the wonderful comments following the release of Prince Harry and Ms. Meghan Markle's engagement photographs. The couple are so grateful for the warm and generous messages they have received during such a happy time in their lives. As a way to say thank you, they have decided to share this candid photograph from the day of their portrait sittings directly with all of you." Earlier in the week, there was yet another sign that Meghan is being welcomed into the family with open arms when she was introduced to Prince Harry's more distant royal relatives at the queen's Christmas lunch on Dec. 20.

After keeping us guessing for about two years, "Empire" star Taraji P. Henson finally confirmed that she's been dating former NFL star Kelvin Hayden. "I'm not the type to blast my personal business. But, you know, I think that's important for people to know. I'm happy. I'm very, very happy. I just am," she said on Essence's "Yes, Girl!" podcast on Dec. 14. Rumors that the duo were a couple started swirling in December 2015 after they were spotted holding hands in Miami. While he's appeared on her Instagram page over the last few years, she never confirmed the relationship because "it was all over [gossip site] The Shade Room anyway," she explained. So happy for Cookie!

"Star Wars" heartthrob Oscar Isaac might have quietly married longtime love Elvira Lind! The actor, who welcomed son Eugene with the Danish director in April, referred to her as his wife — while sporting what appeared to be a wedding band — in a video BuzzFeed posted on Dec. 14. Two days earlier, Elvira was seen wearing a ring that also looked like a wedding band during the London premiere of "Star Wars: The Last Jedi." We'll have to wait and see if they confirm!

Another day, another model! Leonardo DiCaprio was photographed leaving the home of 20-year-old Argentinian model Camila Morrone on Dec. 16. The 43-year-old Oscar winner has a long history of dating up-and-coming blonde models. No word on if this romance is serious or just another fling for the Oscar winner.

Kaia Gerber has a new boy in her life and, like her, he is the child of a celebrity. The 16-year-old model daughter of Cindy Crawford and Rande Gerber is rumored to be dating former "EastEnders" star Patsy Palmers' 17-year-old model son, Fenton Merkell. In a Dec. 16 report in Britain's The Sun, a source revealed, "It's very early days but they have grown close and seem very happy together." So cute!

It's finally over, legally speaking, for Melanie Brown and Stephen Belafonte. TMZ reported that on Dec. 15, after more than eight months of bitterness and drama, a judge finalized their divorce. The only thing left for them to sort out is the division of their property, TMZ explained, noting that the "America's Got Talent" judge will share joint custody of daughter Madison with her ex and pay him $15,000 a month for the next three years.

Vicki Gunvalson is ready to walk down the aisle again! The "The Real Housewives of Orange County" star told Us Weekly on Dec. 15 that she is hoping to marry her boyfriend of a year and a half, Steve Lodge. "I am so ready for marriage, I'm a marriage girl," the reality star said. "I told him from the very beginning, if you don't want to get married, then don't waste your time with me because I love being married. There's no ring on right now, but we're taking it slow and have a great relationship, that's the most important thing for me, is making sure it's a solid relationship," she continued. Vicki has been married twice before. It appears that her "love tank" is full! WOO HOO!

Katie Holmes and Jamie Foxx's undercover romance is still going strong! E! News reported on Dec. 14 that the Oscar winner threw himself a massive 50th birthday party on the Paramount Studios lot in Los Angeles with a bevy of A-list guests including Leonardo DiCaprio, Snoop Dogg and Katie Holmes! A source told E!, "He was having an amazing time and said it was the best party ever." The site reported that Katie was spotted picking Jamie up from a private dinner at The Highlight Room attended by close friends and then taking him to his party. There, adds another source, "She looked on as Jamie gave speeches and danced with his friends. She seemed happy for him watching him in his element and having fun." While rumors have been swirling about their relationship for years now, the two have yet to confirm their romance, though they were finally snapped holding hands in September. Happy birthday to Jamie!

Former Wham! star Andrew Ridgeley is moving on. On Dec. 17, MailOnline published photos of the late George Michael's music parter making out with a mystery blonde during a wild night out in London. The '80s pop star and his partner of 25 years, Bananarama's Keren Woodward, called it quits this fall. "It wasn't really working for either of us," Andrew told Britain's Mirror in November. "As close friends, with different lives, we see each other as circumstances allow and retain a great affection for one another." Keren added, "Yes, we've gone our separate ways. These things happen, unfortunately, but we still speak."

NFL star Victor Cruz has a new girlfriend in Karrueche Tran. Us Weekly confirmed on Dec. 17 that the football free agent and the "Claws" actress are officially an item. A source told the mag, "They are dating and have been for about a month now. They really like each other and are trying to make it work and see where it goes. They were and have been friends for a while and she was at his private birthday dinner in November. They aren't exclusive yet, but it's definitely in the works." On Dec. 16, the couple was spotted holding hands while shopping in Los Angeles. "Victor and Karrueche have been hooking up for a long time. The timing was just never right and they were never in the same place at the same time. Now she has a lot more free time and for the time being so does he, so they are doing their best to make things work. She's super into him and he's head over heels for her. It's adorable and she's loving it," the source continued. Karrueche's roller coaster relationship with music star Chris Brown ended in early 2015. Victor was previously engaged to Elaina Watley, with whom he has a daughter, but that relationship ended after she discovered he'd been unfaithful.

It's splitsville for race car drivers Danica Patrick and Ricky Stenhouse Jr. TMZ reported on Dec. 18 that after five years of dating, Danica is moving on because she wanted a ring and Ricky wasn't ready to propose. Sad to hear it! 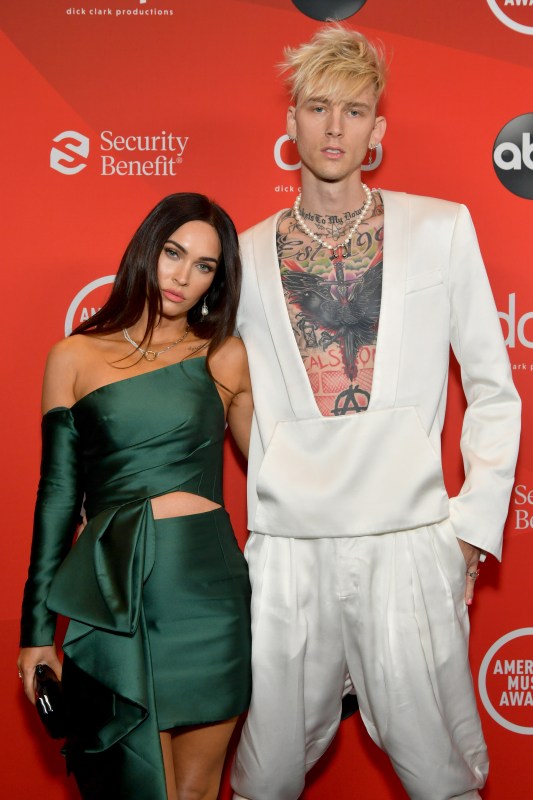 Up Next Memorable AMA duos

Jennifer Lopez and Alex Rodriguez pose in NYC, plus more pics to see

These are the biggest TV moments of 2020

Find out what Kim Kardashian, Dominic West, Reese Witherspoon, Kelly Dodd and more stars did to make our celebrity turkeys of 2020 list

Back On The Wagon