We can't wait to see Ethan Hawke on screen again! His latest project, "The Good Lord Bird," debuts on Showtime on Oct. 4, 2020. In honor of the new miniseries, Wonderwall.com is taking a look back at his life and career in photos…

Born in Texas, Ethan Hawke was raised by his mother, who moved the family around many times. He started auditioning for acting roles at just 14, landing the movie "Explorers" a year later in 1985. Despite the early start, the film's poor reception led Ethan to take a break from acting.

Ethan Hawke returned to the big screen in 1989 when he appeared in "Dead Poets Society" alongside Robin Williams. This film's reception was a very different story from his first — critics adored the drama and it was nominated for best picture at the Academy Awards.

RELATED: "Dead Poets Society" cast: Where are they now?

Following the success of "Dead Poets Society," Ethan Hawke appeared in numerous roles on the big screen. He played the son of Ted Danson and the grandson of Jack Lemmon in "Dad" that same year and scored his first leading role in 1991's "White Fang." In the film, seen here, he plays a gold hunter who has a close relationship with a wolfdog.

Aside from film, Ethan Hawke was also active in the world of theater. He made his Broadway debut in "The Seagull" in 1992 and in 1995 he appeared in "Buried Child" in Chicago. He's seen here in a portrait taken in New York City in the '90s.

Next up for Ethan Hawke? A war flick, "A Midnight Clear." The 1992 film also starred Gary Sinise and Kevin Dillon, whom he's seen with here. Based on the book of the same name, the movie received wonderful reviews from critics. He followed it up with another movie based on a book — 1993's "Alive," which told the story of the survivors of a plane crash in the Andes.

"Reality Bites" hit theaters in 1994 and made Ethan Hawke a true '90s star. He appeared opposite Winona Ryder in the flick, which wasn't a smash hit at the box office but went on to become a cult classic.

Ethan Hawke followed up "Reality Bites" with another critically acclaimed film — "Before Sunrise." The Richard Linklater drama hit theaters in 1995 and saw him play Jesse, an American who meets a French woman (played by Julie Delpy) on a train and goes on to spend the night walking around Vienna, Austria, with her. The flick was lauded for its simplicity, as it essentially only shows two people walking and talking.

Ethan Hawke added a new job title to his resume in 1996 — published author. The actor released his first novel, "The Hottest State" — a love story between an actor and a singer. He's seen here the following year. A decade after its release, Ethan directed a movie based on his book.

Back to the big screen! Ethan Hawke starred in 1997's "Gattaca," a sci-fi film that didn't do so well at the box office. Despite it not being a hit, the film ended up having a significant effect on Ethan's personal life…

Ethan Hawke fell for co-star Uma Thurman on the "Gattaca" set. The two struck up a relationship and started dating. They're seen here at a pre-Oscars party in 1997.

1998 also saw Ethan Hawke star in "The Newton Boys." The film reunited him with his "Before Sunrise" director Richard Linklater and saw him starring as a Texas bank robber alongside Matthew McConaughey, Skeet Ulrich and Vincent D'onofrio.

Aside from being a big year professionally, 1998 was also a massive year for Ethan Hawke personally. That May, he married Uma Thurman, who was pregnant with their first child. Daughter Maya arrived two months later. The couple are seen here that September.

In 2000, Ethan Hawke took on the iconic titular role in "Hamlet," which took the classic Shakespeare tale and set it in present-day New York City. Julia Stiles, Kyle MacLachlan and Bill Murray also starred in the drama, which received mixed reviews from critics.

Another box office hit! Though it had been a while, Ethan Hawke scored a major commercial hit in 2001 with "Training Day." He starred opposite Denzel Washington in the flick, which focused on detectives in the LAPD working in South Los Angeles. Ethan later called the movie "his best experience in Hollywood" in an interview with The Guardian.

It was time for another change in the early '00s, as Ethan Hawke opted to stray from acting and take on different roles. He directed his first film, "Chelsea Walls," which was released in 2001 and starred wife Uma Thurman, Kris Kristofferson and Rosario Dawson. Unfortunately, the film received terrible reviews and didn't succeed commercially either.

Daddy duty! The star was spotted pulling double dad duty in 2002, picking up daughter Maya from preschool while holding infant son Levon, whom he and Uma Thurman had welcomed that January.

Ethan Hawke released another book in 2002. His second novel, "Ash Wednesday" — which follows an AWOL soldier — was a New York Times bestseller.

Back to Broadway! Ethan Hawke starred in "Henry IV" in 2003 on Broadway. He's seen here with co-star Audra McDonald.

It's over! Ethan Hawke and Uma Thurman called it quits in 2003 after five years of marriage. They're seen here with their kids, Maya and Levon, in New York City that Halloween.

His hit "Before Sunrise" inspired the 2004 sequel "Before Sunset." Once again directed by Richard Linklater, this romantic drama united Ethan Hawke and Julie Delpy. The story continues nine years after their first meeting, this time in Paris as the two characters spend an afternoon together. It was a smash hit critically and earned an Academy Award nomination for best adapted screenplay — which Ethan shared as a co-writer with Julie, Richard and screenwriter Kim Krizan.

2006 saw Ethan Hawke return to directing, this time with a passion project — the movie adaptation of his first novel, "The Hottest State." The film was released in 1997 to modest reviews and starred Mark Webber and Catalina Sandino Moreno (with whom he's seen here at the Venice International Film Festival that September) as the lovers, with Michelle Williams, Laura Linney and Ethan himself also appearing.

While appearing for work at the Venice Film Festival in 2006, Ethan Hawke carved out a little personal time. He's seen here with kids Maya and Levon, who were enjoying time in the sun during dad's business trip.

"Before the Devil Knows You're Dead" came out in 2007 and starred Ethan Hawke alongside Philip Seymour Hoffman and Marisa Tomei. Critics loved this crime drama, which found itself on many best films of the year lists — including in the top spot on The Hollywood Reporter's list.

In 2008, Ethan Hawke was the recipient of the Michael Mendelson Award for Outstanding Commitment to the Theater. This came on the heels of the actor starring in "The Coast of Utopia" the year prior and picking up a Tony Award nomination for his performance.

Moving on! Ethan Hawke married again in 2008, this time tying the knot with Ryan Shawhughes — who previously worked as his children's nanny. They wed that June and welcomed a child together, daughter Clementine, a month later. They're seen here at the Gotham Independent Film Awards that December.

Ethan Hawke joined an impressive cast in the ensemble film "New York, I Love You," which was released in America in 2009. The film is made up of 11 short flicks set in New York and also stars Bradley Cooper, Shia LaBeouf, Natalie Portman, Orlando Bloom, Andy Garcia and Robin Wright, to name a few.

A blended family! Ethan Hawke is seen here at a soccer game during the Tribeca Film Festival in New York City in 2011 with son Levon (with ex-wife Uma Thurman) and daughter Clementine (with current wife Ryan Shawhughes). Ryan was pregnant with their second daughter, Indiana, at the time.

Ethan Hawke starred in his first horror film in 2012, taking on the starring role of a true crime author in "Sinister." The flick was a box office hit, earning $87 million worldwide.

The final installment in the Richard Linklater "Before" series, "Before Midnight," came out in 2013. Ethan Hawke reprised his role alongside Julie Delpy and, as he'd done for the previous film, helped write the screenplay. This movie picks up another nine years later and sees the characters spending the summer in Greece with their children. It also scored a nomination for best adapted screenplay at the Academy Awards.

Ethan Hawke took two very special dates to the premiere of his film "Getaway" in 2013 — his kids! He brought along daughter Maya and son Levon for the big night.

In 2013, Ethan Hawke opted to star in another horror film, this time the dystopian flick "The Purge." The movie was a hit with audiences, despite mixed reviews, and went on to spawn three sequels with a fourth in the works.

Ethan Hawke united with Richard Linklater once more for 2014's "Boyhood," a film they shot together over an impressive 12 years as it follows the life of a young boy in America from ages 8 to 18. Ethan played the father in the film, which earned a plethora of nominations during awards season. He received nominations at the Academy Awards, the BAFTAs, the Golden Globes and the SAG Awards for best supporting actor, and the film itself took home the Golden Globe for best drama and the BAFTA prize for best film.

2016 saw Ethan Hawke take to the screen with John Travolta in the Western flick "In a Valley of Violence." Despite receiving dismal reviews and being a commercial flop, critics praised Ethan and John's performances.

Ethan Hawke was on hand for the Venice Film Festival in 2017, and he had a special guest alongside him — son Levon Hawke. The two posed on the red carpet at the premiere of "First Reformed" that August.

As he had in the past, when Ethan Hawke needed to bring a plus one to an event in 2018, he turned to family. He brought along daughter Maya Hawke to the Independent Spirit Awards that March. A year prior, the then-almost-20-year-old made her acting debut in "Little Women" on the BBC.

Ethan Hawke returned to Broadway once more in 2019 to star in "True West" opposite Paul Dano.

Ethan Hawke's latest film, "The Truth" opposite Catherine Deneuve and Juliette Binoche, was released overseas in 2019. It premiered at the Venice Film Festival that August and saw releases in Japan and France later on that year. Unfortunately, it was scheduled to come out in the United States in March 2020 — the same month Ethan is seen here — but that release was postponed due to the coronavirus pandemic. 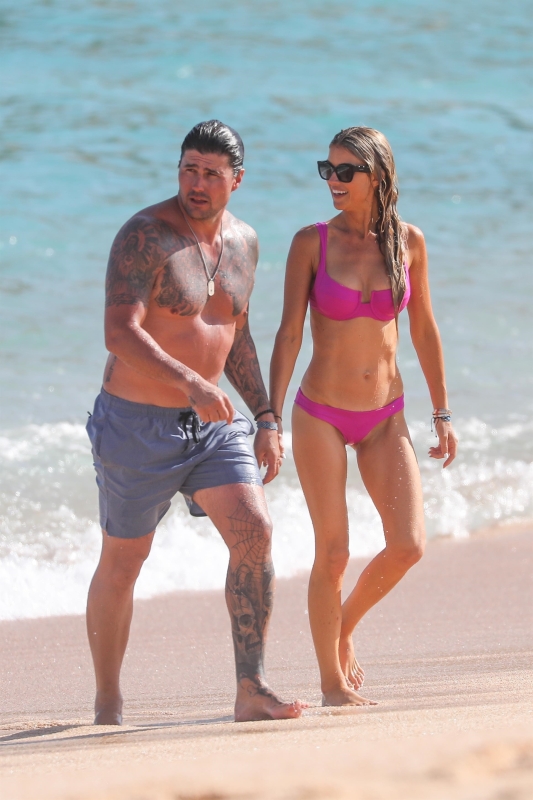