In honor of the 2019 CMA Awards on Nov. 13, Wonderwall.com rounded up the hottest — and most talented — women in the country music genre, starting with Lady Antebellum singer Hillary Scott. She wrapped up her band's "Summer Plays On" tour in 2018 after releasing a new album, "Heart Break," in 2017. She also became a mama of three when she welcomed twin girls in January 2018. In 2019, she and her Lady A bandmates kicked off a Las Vegas residency. Keep reading for more…

RELATED: What country singers looked like at the start of their careers

Country-turned-pop singer Taylor Swift has reached truly icon status. She's one of the bestselling music artists of all time, having sold more than 50 million albums — including 27.8 million in the States — and 150 million single downloads. Taylor is also the winner of 10 Grammys, one Emmy, 23 Billboard Music Awards and 12 Country Music Association Awards! She released her seventh album, "Lover," in 2019 and is set to star in the movie-musical "Cats" in December 2019. Taylor also seems to have found lasting love with British actor Joe Alwyn, whom she quietly began dating in 2016.

Carrie Underwood released a top-selling album, "Cry Pretty," in 2018, hosted the 2018 Country Music Association Awards and kicked off the "Cry Pretty Tour 360" in May 2019. But despite all her success, the Oklahoma bombshell always makes time for family. The country crooner welcomed her second son, Jacob, with husband Mike Fisher in January 2019.

With her pierced nose, lyrics about smoking pot and that alt-country vibe, Kacey Musgraves isn't a typical Nashville star — and that suits her just fine. She's released four critically acclaimed albums and took home the top prize at the 2019 Grammy Awards — album of the year for "Golden Hour." "I'm just kind of over the angry Southern ball-busting chick songs," Texas-bred Kacey told The Hollywood Reporter in 2013. "Not that I don't have times where I'm angry or sassy … I'd rather be more of the hippie country chick — as in, instead of pointing a finger, just maybe saying, 'We're all screw-ups. We're all in this kind of together. We're all just figuring this out.'"

Miranda Lambert is more than just a country music superstar. In early 2013, she opened up a store and ice cream parlor, The Pink Pistol, in Tishomingo, Oklahoma, where she lived with now-ex Blake Shelton. She continues to help animal shelters across the country through her MuttNation Foundation charity. As for her music? Miranda released a 2018 album with her group the Pistol Annies and dropped a new solo album, "Wildcard," on Nov. 1, 2019. She also shocked the world when she announced that she'd secretly wed NYPD officer Brendan McLoughlin in January 2019.

Maren Morris has seen almost nonstop success since she hit the country scene in 2016. She's up for six awards at the 2019 CMA Awards all thanks to her hit-producing album "Girl," which came out in 2018. She's also teamed up with fellow country stars Brandi Carlile, Amanda Shires and Natalie Hemby to form the supergroup The Highwomen. In October 2019, she announced that she and her new husband, singer-songwriter Ryan Hurd, are expecting their first child together — a son — in 2020.

If you don't know Michigan native Jana Kramer from her hit "Why Ya Wanna" — which earned her two CMT Music Award nominations — you probably recognize her from her acting career, which has seen her on everything from "One Tree Hill" and "Entourage" to "Friday Night Lights" and "90210." When it comes to country music, she knows her way around the themes of love and loss: She's been divorced twice (her second marriage, to actor Johnathon Schaech, lasted less than a month) and is currently married to former NFL player Mike Caussin. The couple, who share two children, briefly separated in 2016 due to Mike's sex addiction issues, but are now back together and sharing their journey of healing with fans, often on Jana's popular "Whine Down with Jana Kramer" podcast.

It's been a helluva ride for Faith Hill. The mother of three wrapped up her 2018 tour, "Soul2Soul: The World Tour," with husband Tim McGraw and released a joint album, "The Rest of Our Life," with Tim in 2017. Faith was also reportedly the inspiration for lead character Rayna James on the hit series "Nashville" — thanks in part to her tenacity. "I've always had a strong work ethic," she told People magazine in 2014. "But it's greater now because I know they're paying attention. It's important for my girls to see I'm a working mom … that I had a dream and I'm still making it happen."

All hail country queen Reba McEntire! She's racked up nearly 60 top 10 singles over her four-decade career, influenced every female country star worth knowing and launched two successful television comedy series, helping to make country music more mainstream than ever. The Country Music Hall of Fame rightly honored the superstar starting in 2014 with an exhibit called "Reba: All the Women I Am." Never one to slow down, Reba released her 29th studio album, "Stronger Than the Truth," in April 2019, and returned to host the 54th Annual Academy of Country Music Awards the same month.

After three solo albums, Jennifer Nettles reunited with longtime collaboration Kristian Bush as Sugarland in 2017! The mother of one — who welcomed son Magnus in 2012 — released Sugarland's sixth studio album, "Bigger," in 2018.

It's been a busy few years for Ashley Monroe. Her critically acclaimed fourth album "Sparrow" dropped in April 2018; her new album with her band the Pistol Annies, "Interstate Gospel," was released in November 2018; and she welcomed her first child, a son, with her husband, former Chicago White Sox pitcher John Danks, in August 2017. "I never had a backup plan. I never wanted one. So I just kept going," the Tennessee-bred singer (who goes by "Hippie Annie" when she's performing with her Pistol Annies bandmates Miranda Lambert and Angaleena Presley) told ESPN of her career. "There's not even another option — music is my soul."

As the sole female member and lead singer of The Band Perry — they released their third album, "Coordinates," in 2018 — Kimberly Perry says she's often at odds with her bandmate brothers when it comes to fighting for what she believes in. "There are few things in life really worth arguing over," the Mississippi native — who divorced former MLB star J.P. Arencibia in 2018 — told A Taste of Country. "However, creativity is one of those."

After riding a roller coaster of emotions after splitting from her allegedly unfaithful husband, music producer Mutt Lange, in 2008, Shania Twain found happiness again when she wed Frederic Thiebaud — the husband of the woman who allegedly had an affair with Mutt — in 2011. She released her first album in 15 years in 2017, "Now," and embarked on the "Shania Now" tour in 2018. "I think I'm enjoying the performance part of it more than I ever have," Shania told the Las Vegas Sun, "and I can see myself carrying on doing that in some capacity for longer than maybe I expected — considering the fact that I thought I would never get back up onstage again."

After winning the mirror ball trophy on Season 16 of "Dancing With the Stars" along with partner Derek Hough, Kellie Pickler was ready to get back to her first love: music. She released her fourth album, "The Woman I Am," in 2013 and released a promotional single "Feeling Tonight" in 2015. More recently, Kellie starred in her own reality TV show, "I Love Kellie Pickler," and in 2017 started hosting the Daytime Emmy-nominated syndicated talk show "Pickler & Ben" with comedian Ben Aaron.

Sara Evans was the very first country artist to compete on "Dancing With the Stars," but these days, she's back to making music. "I know the fans are getting a little antsy for new songs, because so am I. [But] it takes me a long time to finish a record," she told Country Weekly. That, explains the brunette, is because it's harder to get to the studio in Nashville now that she lives in Alabama with her husband, radio host Jay Barker, and their combined seven kids. Nevertheless, Sara has still released a few albums in recent years: 2014's "Slow Me Down" and 2017's "Words," plus a joint album recorded with her children Avery and Olivia in April 2019.

Shawna Thompson is one half of husband-wife duo Thompson Square, who released their third album, "Masterpiece," in 2018. Shawna and hubby Keifer Thompson tied the knot back in 1999, but even after all these years, they still love working together. "I think our relationship is a lot healthier now, just because we're doing what we absolutely love to do," the Alabama native told Rolling Stone. Added her husband: "She's my favorite female singer."

Hayden Panettiere and Connie Britton might not technically be country music stars, but they sure did know how to act like 'em on their hit ABC/CMT show "Nashville," which wrapped in 2018. While filming in Tennessee, Hayden, who played ambitious pop-country star Juliette Barnes, slept on a friend's futon after briefly living in Taylor Swift's condo building. (For the record, she's insisted her character wasn't based on Taylor. Um, if you say so, Hayden!) Connie, who played Faith Hill-esque country star Rayna James, admitted that she was terrified of the singing she'd have to do for the role. "When I recorded the songs for the pilot, I didn't let anyone listen to me, except for my voice teacher," she told Redbook. But she overcame her fear in the end. "I guess," said Connie, "I was lured by the sequins!" 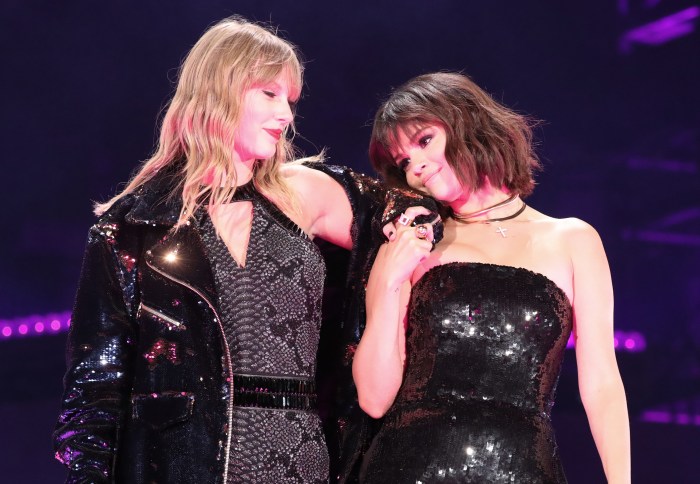 Up Next BFF Collab?