Peter Weber to star on Season 24 of "The Bachelor," former "The Bachelorette" star Rachel Lindsay says the Bachelor Nation "system isn't working" for people of color

On Sept. 17, ABC announced that Peter Weber — who competed for Hannah Brown's heart on Season 15 of "The Bachelorette" earlier this year — will headline the upcoming 24th season of "The Bachelor." Many fans were disappointed by the network's decision to cast the white commercial pilot over Mike Johnson, who also vied for Hannah's affections and would've become the franchise's first black male lead. During a Sept. 17 interview with "Entertainment Tonight," Rachel Lindsay — who became the first black woman to lead the franchise when she starred on Season 13 of "The Bachelorette" in 2013 — shared her thoughts on the matter, saying that although Peter "seems like a very nice guy" and "seems lovely," she's tired of Bachelors who all look the same. How many Peters have we seen before? What season are we on? 24. So we've seen 24 Peters. I'm bored," she said. "For the first time, I was very confident that we were going to see our first black Bachelor. … I want to be hopeful, but when you have a contestant like Mike Johnson, who seems to check all the boxes, how is he not the Bachelor? I don't understand. … I'm sure they have some reason for not picking him, and I'm going to trust in that, but at the same time, the system isn't working in giving us a Bachelor who is a person of color." Another issue, she said, is that with Peter as the Bachelor, it's likely there will be less diversity among the women who will appear on the upcoming season: "The Bachelor is in charge of saying what they're interested in and what they're not," she said, pointing out that because some of the pilot's exes have been in the news already, viewers "know what his type is at this point." (White women with blonde hair.) Added the former Bachelorette, "I expect girls to look more like Hannah than they do like me or someone else of color."

According to The Blast, on Sept. 13, Antonella Barba surrendered to police to begin serving her yet-to-be-determined prison sentence stemming from an October 2018 arrest for fentanyl distribution. In August, the former "American Idol" contestant pleaded guilty to the charges against her and was released on bond to await sentencing in November. (She faces 10 years in prison.) But earlier this month, a judge issued a warrant for her arrest when she allegedly violated a court order mandating that she live with her father, Vincenzo Barba, in Point Pleasant, New Jersey, while out on bond. (It's unclear where exactly the aspiring singer — who competed on Season 6 of "AI" in 2007 — had been living.)

Christie Brinkley's daughter Sailor replaces her on "Dancing With the Stars"

On Sept. 16, just hours before Season 28 of "Dancing With the Stars" debuted, ABC released a statement announcing that Christie Brinkley was forced to withdraw from the competition after breaking her arm during rehearsals. (The accident went down five days before the season premiere and was so bad, the supermodel underwent surgery on her wrist and arm.) Her daughter, Sports Illustrated Swimsuit Issue model Sailor Brinkley-Cook, stepped in to serve as Christie's replacement for the remainder of the season.

On Sept. 12, "Saturday Night Live" announced that Shane Gillis was among the three newcomers cast for the upcoming 45th season. Within hours, countless clips had surfaced depicting the comedian using racist, homophobic and misogynistic language on and off the stage. Four days later, an "SNL" spokesperson released a statement announcing that the long-running sketch comedy series had cut ties with the controversial funnyman. "After talking with Shane Gillis, we have decided that he will not be joining 'SNL,'" the statement read. "We want 'SNL' to have a variety of voices and points of view within the show, and we hired Shane on the strength of his talent as [a] comedian and his impressive audition for 'SNL.' We were not aware of his prior remarks that have surfaced over the past few days. The language he used is offensive, hurtful and unacceptable. We are sorry that we did not see these clips earlier, and that our vetting process was not up to our standard." Shane took to Twitter to share his own statement: "It feels ridiculous for comedians to be making serious public statements but here we are," he tweeted. "I'm a comedian who was funny enough to get 'SNL.' That can't be taken away. Of course I wanted an opportunity to prove myself at 'SNL,' but I understand it would be too much of a distraction. I respect the decision they made. I'm honestly grateful for the opportunity. I was always a 'MADtv' guy anyway."

Inside the blockbuster $600 million "The Big Bang Theory" streaming deal

On Sept. 17, Warner Bros. announced that HBO Max nabbed the exclusive rights to stream "The Big Bang Theory" starting in 2020, while TBS extended its deal to continue airing reruns of the hugely popular sitcom on cable through 2028. In 2010, TBS signed a deal that would see the cable channel exclusively broadcasting the series from 2011 to 2024. According to Variety, Warner Bros. TV, which produces the series, likely paid a huge amount to TBS to get them to give up their exclusivity rights to the show (while also extending their deal by four years) so that "The Big Bang Theory" could also appear on HBO Max. (It's unclear how much Warner Bros. compensated the cable channel.) Variety reports that because Warner Bros. TV, HBO Max and TBS are all owned by WarnerMedia, the deal-making process went relatively smoothly — and because profit participants were involved in the process, Warner was unable to undercut the value of the show to save money internally while also shortchanging the series' creative teams. Variety reports that in the end, the price tag for "The Big Bang Theory" was a cool $600M over five years.

On Sept. 17, Sean Spicer implied on Twitter that the reasons he scored so low on the premiere of Season 28 of "Dancing With the Stars" the previous evening is because the judges don't share his Christian faith. "Clearly the judges aren't going to be with me. Let's send a message to #Hollywood that those of us who stand for #Christ won't be discounted," he wrote in a since-deleted tweet. A day earlier, the controversial former White House press secretary told reporters that he hoped fans could "put every policy and politics aside" to enjoy the show.

"Friends" showrunners reveal the one episode they regret 25 years later

During a Sept. 13 Tribeca TV Festival event celebrating the 25th anniversary of "Friends," one of the sitcom's former executive producers, Marta Kauffman, said that there's one plotline from the series that she regrets: "The stalker [played by] David Arquette," she said. "We did a lot of rewriting on that to make that work." The 1996 episode "The One with the Jam" centered around a man named Malcom stalking Lisa Kudrow's Phoebe after he mistakes her for her twin sister, Ursula. Ultimately, Phoebe justifies Malcolm's behavior and falls for him, inviting him to stalk her instead of her twin. The episode was also difficult to shoot because the actress had trouble filming the scenes in which both Phoebe and Ursula appear — even though her real sister, Helene, filled in as a double, executive producer Kevin Bright explained. "Lisa did really not have a good time, he said. "She did not like acting with a double and I think in a way she might've made it more difficult because her double was her actual sister. … So those scenes were a bit tricky to shoot but ended up being a lot of fun when you put it together." The producers also weren't sold on a Season 2 episode in which Phoebe gives chickenpox to a Navy sailor played by Charlie Sheen whom she occasionally dates when he's in town.

On Sept. 16, former "Saved by the Bell" star Mark-Paul Gosselaar told Variety that he found out about the reboot of the iconic teen sitcom after he "read it in the trades just like everybody else this morning." He went on to say that he was "never approached" about returning to the role of Zack Morris, who was noticeably name-dropped in the official description of the new show. "I woke up to the news this morning with a kind of 'huh' response," he said, adding that he's "always been interested, of course" in reprising the role. He then explained that he likely wasn't approached because the reboot will appear on NBC's upcoming streaming platform, Peacock, while he's currently starring on a new show, "Mixed-ish," on a competing network (ABC) with a streaming service of its own (Disney+). "I'm on ABC, so it doesn't really fit into that considering Disney+, so I understand the business side of things," he said. "But I had no idea it was that far along." Here's the official logline for the new show, which will see Mario Lopez and Elizabeth Berkley returning to the roles of A.C. Slater and Jessie Spano: "When California governor Zack Morris gets into hot water for closing too many low-income high schools, he proposes they send the affected students to the highest performing schools in the state — including Bayside High. The influx of new students gives the over-privileged Bayside kids a much needed and hilarious dose of reality." 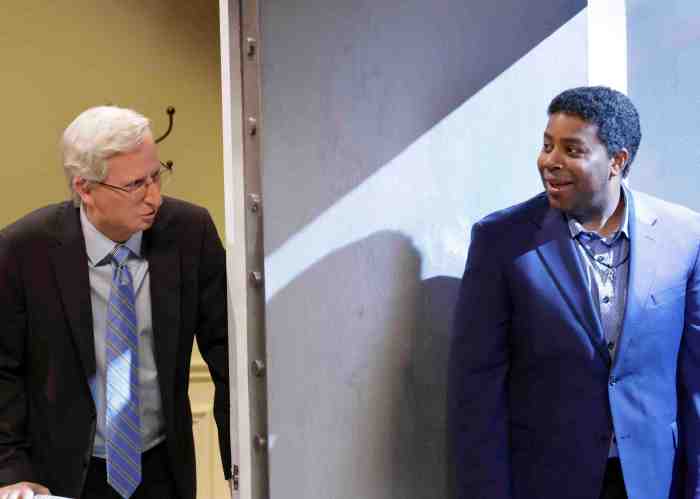