Superheroes have ruled Hollywood for years, and there's no sign of that changing anytime soon — especially as more and more masked vigilantes make the transition from the big screen to the small screen. In honor of the debut of "The Gifted" — which is set within the X-Men universe and centers around suburban parents (Stephen Moyer and Amy Acker) and their mutant children (Percy Hynes White and Natalie Alyn Lind) — on FOX on Oct. 2, 2017, Wonderwall.com rounded up every major live-action superhero show that's currently on the air or on its way to TV imminently. Keep reading for the inside scoop on the biggest small-screen superheroes…

"Legion," which is also set within the X-Men universe, debuted on FX in February 2017. Dan Stevens stars as David Haller, the insanely powerful schizophrenic son of Professor Charles Xavier, on the critically acclaimed drama. (The second season is due in 2018.)

"Gotham," which debuted on FOX in 2014, centers around young versions of Bruce Wayne (before he became Batman) and future Gotham City Police Commissioner Jim Gordon (Ben McKenzie, pictured). The fourth season of the show premiered on Sept. 21, 2017.

"Marvel's Agents of S.H.I.E.L.D." debuted on ABC in 2013. The series, which is set in the Marvel Cinematic Universe, centers around Clark Gregg's Phil Coulson (center), who was first introduced on the big screen in 2008's "Iron Man," and his team of human and superhuman colleagues. The fifth season is due in late 2017.

The first two episodes of "Marvel's Inhumans," an ABC series set within the Marvel Cinematic Universe, premiered in IMAX theaters on Sept. 1, 2017, a full month before its television debut on Sept. 29, 2017. The series centers around the Inhuman royal family of Attilan, whose members are considered superheroes (or supervillains!) on Earth. Anson Mount, Serinda Swan and Iwan Rheon are among the stars of the show.

The CW launched their DC Comics superhero universe with "Arrow" in 2012. Stephen Amell has starred as Oliver Queen, who moonlights as the vigilante hero Green Arrow, ever since. The sixth season of the series debuts on Oct. 12, 2017.

Grant Gustin debuted as Barry Allen, who moonlights as the super-fast titular superhero, on "The Flash" in 2014. The CW series, which is part of the Arrowverse, will enter its fourth season on Oct. 10, 2017.

Melissa Benoist debuted as Kara Zor-El, the titular superheroine, on CBS's "Supergirl" in 2015. The series, which is part of the Arrowverse, transferred to The CW after its first season and will enter its third season on Oct. 9, 2017.

"DC's Legends of Tomorrow" — which centers around time-traveling heroes, antiheroes and villains from the Arrowverse — debuted on The CW in 2016. It will enter its third season on Oct. 10, 2017.

Netflix launched its Marvel universe with "Daredevil" in 2015. Charlie Cox stars as blind lawyer Matt Murdock — who moonlights as the titular vigilante — on the series, which has been renewed for an upcoming third season.

Krysten Ritter stars as the super-strong titular superheroine on Netflix's "Jessica Jones," which debuted in 2015. The series has been renewed for an upcoming second season.

Mike Colter, who debuted as bulletproof bartender Luke Cage on "Jessica Jones" in 2015, got his own Netflix show in 2016. "Luke Cage" has been renewed for an upcoming second season, which is reportedly due in 2018.

Finn Jones debuted as the titular hero on Netflix's "Iron Fist" in March 2017. The series has been renewed for an upcoming second season.

Krysten Ritter's Jessica Jones, Finn Jones' Iron Fist, Charlie Cox's Daredevil and Mike Colter's Luke Cage teamed up for the first season of "The Defenders," which debuted on Netflix in August 2017. Though the streaming service has yet to officially renew the series for a second season, it's widely believed that it's only a matter of time until an announcement is made.

Jon Bernthal debuted as The Punisher on the second season of Netflix's "Daredevil" in 2016. The antihero managed to score his own spinoff, which is expected to debut on the streaming service in late 2017.

Amazon launched a rebooted version of "The Tick" — an action-comedy centered around an Average Joe and the titular blue superhero (Peter Serafinowicz) who might actually be a figment of his imagination — in August 2017. The second half of the first season is reportedly due in early 2018.

There have been countless versions of the Power Rangers — teenagers with superhuman fighting skills and other enhanced abilities who can control powerful robots called Zords — since the franchise first debuted as "Mighty Morphin Power Rangers" in 1993. The current iteration, "Power Rangers Ninja Steel," which is technically the 24th season of the long-running show, debuted on Nickelodeon in January 2017.

"Marvel's Runaways," which debuts on Hulu on Nov. 21, 2017, centers around six diverse teenagers who discover that their parents are supervillains in disguise. The superhuman offspring (portrayed by Virginia Gardner, Lyrica Okano, Rhenzy Feliz, Gregg Sulkin, Ariela Barer and Allegra Acosta) flee their respective homes "to atone for their parents' actions and to discover the secrets of their origins."

"Black Lightning," which is set to debut on The CW in 2018, centers around the titular retired superhero, who can harness and control electricity. Cress Williams stars as high school principal Jefferson Pierce, who returns to his life of crime fighting when a gang takes root in his neighborhood. (The series will not be part of The CW's Arrowverse.)

"Krypton" is set to debut on Syfy in 2018. The series will center around Superman's grandfather, Seyg-El, and his adventures on their titular home planet. "Florence Foster Jenkins" actor Cameron Cuffe (pictured) has been cast in the lead role.

"Marvel's Cloak & Dagger" is set to debut on Freeform in 2018. The high school drama centers around teenagers from different walks of life — Olivia Holt's Tandy Bowen, who emits daggers of light, and Aubrey Joseph's Tyrone Johnson, who can engulf others in darkness — who fall in love as they begin to develop their superhuman powers.

"Marvel's New Warriors" is also set to debut on Freeform in 2018. The half-hour action-comedy will center around six young people with odd gifts: Calum Worthy's Speedball, who throws kinetic balls of energy that he can't really control; Matthew Moy's Microbe, who can communicate with germs; Kate Comer's Debrii, who is telekinetic but can only move extremely small or light-weight items; Jeremy Tardy's Night Thrasher, Derek Theler's Mister Immortal and Milana Vayntrub's Squirrel Girl.

"Titans," a live-action series based on the "Teen Titans" cartoon, is set to debut on DC Comics' as-yet-unnamed upcoming streaming service in 2018. Deadline reported in September 2017 that Brenton Thwaites (pictured) has been cast as Batman sidekick Dick Grayson, the leader of the titular group of teenage superheroes.

HBO has ordered a pilot for a TV series based on DC Comics' "Watchmen" series, which centers around a group of mostly powerless costumed vigilantes and was previously adapted as a 2009 movie starring Malin Akerman (pictured), Patrick Wilson, Billy Crudup and Jackie Earle Haley, among many others. 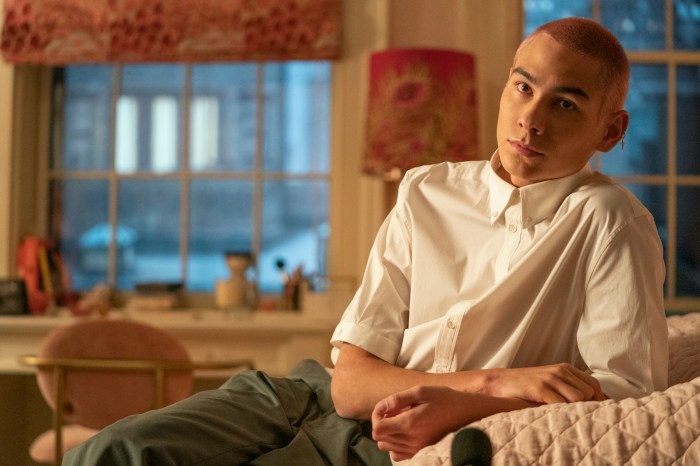