From "Four Weddings and Funeral" to "10 Things I Hate About You," the '90s was a decade filled with iconic romantic comedies and memorable love interests! Join Wonderwall.com as we find out what our favorite leading men from '90s rom-coms are up to nowadays… starting with birthday boy Paul Rudd — who turns 52 on April 6, 2021. Back in 1995, Paul starred in the cult classic teen film "Clueless." He played Josh Lucas, Cher Horowitz's (Alicia Silverstone) former step-brother-turned-more. As for what Paul's been up to since? Keep reading to find out…

Since "Clueless," Paul Rudd has continued to land starring roles. Throughout the '90s and '00s, the seemingly ageless actor appeared in several films including 1996's "Romeo + Juliet," 2001's "Wet Hot American Summer," 2004's "Anchorman: The Legend of Ron Burgundy," 2005's "The 40-Year-Old Virgin" and 2007's "Knocked Up." In 2015, he joined the Marvel Cinematic Universe when he took on the titular superhero role in 2015's "Ant-Man." He also appeared as Ant-Man in "Captain America: Civil War," "Ant-Man and the Wasp" and "Avengers: Endgame." For his starring, dual role on the Netflix comedy series "Living With Yourself," Paul earned a 2020 Golden Globe nomination for best actor in a TV musical or comedy series. Next up, he'll star in "Ghostbusters: Afterlife," the fourth installment of the franchise, which is slated to debut in 2021. In 2003, Paul married publicist Julie Yaeger, with whom he shares children Jack and Darby.

Two years after appearing in "I Know What You Did Last Summer," Freddie Prinze Jr. landed a starring role in the 1999 rom-com "She's All That" (pictured). He played student body present and big man on campus Zack Siler, who falls head over heels for art kid Laney Boggs (Rachael Leigh Cook).

Freddie Prinze Jr. has kept a relatively low profile since his days as a '90s rom-com heartthrob. He went on to appear in films like 2000's "Down to You," 2002's "Scooby-Doo," 2004's "Scooby-Doo 2: Monsters Unleashed," 2007's "Brooklyn Rules" and 2008's "Jack and Jill vs. the World." The longtime wrestling fan also worked as a writer and producer for the WWE in the late aughts. From 2014 to 2018, Freddie lent his voice to the character of Kanan Jarrus on the Emmy-nominated children's series "Star Wars Rebels." He also voiced roles on "Kim Possible: A Sitch In Time," "Robot Chicken" and "Bordertown." In 2016, the foodie published "Back to the Kitchen: 75 Delicious, Real Recipes (& True Stories) from a Food-Obsessed Actor: A Cookbook." Nowadays, Freddie co-hosts the podcast "Prinze and The Wolf," which covers topics like parenting, pop culture, cooking and MMA, with longtime friend Josh Wolf. In 2021, he starred alongside Soleil Moon Frye as her character's ex-husband on Peacock's "Punky Brewster" reboot. Freddie married "Buffy the Vampire Slayer" star Sarah Michelle Gellar in 2002. They share children Charlotte and Rocky.

Back in the '90s, it seriously felt like Hugh Grant was in just about every romantic comedy. He starred in two Richard Curtis flicks: 1994's "Four Weddings and a Funeral" as Charles, the unmarried best man (which earned him both a Golden Globe and a BAFTA Award), and in 1999's "Notting Hill" (pictured) as shy bookstore owner Will Thacker, who falls in love with American movie star Anna Scott (Julia Roberts).

Hugh Grant went on to appear in several more critically acclaimed films including "Bridget Jones's Diary" (and its first sequel), "About a Boy," and American Dreamz." For his depictions of St. Clair Bayfield in 2016's "Florence Foster Jenkins," Phoenix Buchanan in 2017's "Paddington 2" and Jeremy Thorpe in the 2018 BBC miniseries "A Very English Scandal," Hugh received BAFTA Award nominations. He also had memorable turns in a few Guy Ritchie films — 2015's "The Man from U.N.C.L.E." and 2020's "The Gentlemen." In 2020, he starred opposite Nicole Kidman on the HBO drama series "The Undoing," which earned him a Golden Globe nomination for best actor in a miniseries or television movie. Eighteen years after his split from longtime partner Elizabeth Hurley, Hugh married Swedish TV producer Anna Eberstein. He has five children — three with Anna and two with ex Tinglan Hong.

Where has the time gone? 1998's "How Stella Got Her Groove Back" marked Taye Diggs' feature film debut. He co-starred as Winston Shakespeare, the charismatic 20-something Stella meets in Montego Bay.

New Jersey-born Taye Diggs actor went on to appear in several films including "The Best Man," "Brown Sugar," "Chicago," "Baggage Claim," "Opening Night" and "Set It Up." He took his acting prowess to the small screen and starred on the short-lived series "Kevin Hill" from 2004 to 2005 and Shonda Rhimes' medical drama "Private Practice" from 2007 to 2013. Taye was also part of the original Broadway cast of "Rent," which debuted in 1996. He replaced Neil Patrick Harris in the titular role in Broadway's "Hedwig and the Angry Inch" in 2015. He can currently be seen on the Peacock series "The Best Man: The Final Chapters," reprising his role from the 1999 movie "The Best Man." In 2013, after 10 years of marriage, Taye and actress Idina Menzel called it quits. They share a son.

Richard Gere starred in the classic romantic comedy "Pretty Woman," which hit theaters in 1990. He played Edward Lewis, an affluent businessman who hires an escort (Julia Roberts) to accompany him to a week's worth of business events — then falls in love with her.

Over the last three decades, Richard Gere has appeared in films like "Sommersby," "Primal Fear," "Runaway Bride," "I'm Not There" and "Arbitrage." For his performance as Billy Flynn in the Academy Award-winning musical "Chicago," he earned both a Golden Globe and a SAG Award. His two latest films, "The Dinner" and "Three Christs," debuted in 2017. In 2019, he landed his first starring television role on the BBC's "MotherFatherSon," which ran for one season. Following his 2013 split from model-turned-actress Carey Lowell, with whom he shares an adult son, Richard married publicist-activist Alejandra Silva in 2018. The "Norman: The Moderate Rise and Tragic Fall of a New York Fixer" actor and Alejandra welcomed boys in 2019 and 2020.

What's more '90s than a rom-com named after a hit Britney Spears track? Once upon a time, Adrian Grenier appeared in the 1999 flick "Drive Me Crazy." He starred as Chase Hammond, an anarchist who enters a fake relationship with his longtime neighbor, Nicole Maris (Melissa Joan Hart), in an effort to make their respective love interests jealous.

After "Drive Me Crazy," Adrian Grenier landed the starring role on HBO's "Entourage," which ran from 2004 to 2011. He also appeared in 2006's "The Devil Wears Prada," 2008's "Adventures of Power" and 2014's "Goodbye World." He reprised his role as Vincent Chase in the 2015 "Entourage" film. He's since taken a step back from acting, instead shifting his focus to producing and directing. An impassioned environmentalist, Adrian was appointed a United Nations Environment Goodwill Ambassador in 2017.

Dermot Mulroney starred in 1997's "My Best Friend's Wedding" as Michael O'Neal, the engaged best friend of Julianne Potter (Julia Roberts), who tries to sabotage his relationship with his fiancé (Cameron Diaz).

Since starring in "My Best Friend's Wedding," Dermot Mulroney has acted in more films like "About Schmidt," "The Wedding Date," "August: Osage County" and "Trade of Innocents." His latest films, "Sgt. Will Gardner" and "The Courier," were released in 2019. In 2020, he had recurring roles on two television shows, "Messiah" and "Prodigal Son," who followed other memorable roles on buzzy TV shows including "New Girl," "Shameless," "Homecoming" (which saw him reunite with Julia Roberts) and "The Righteous Gemstones." Following his 2007 split from actress Catherine Keener, with whom he shares son Clyde, Dermot married Italian film producer Tharita Cesaroni-Catulle in 2008. The couple welcomed daughters Mabel and Sally in 2008 and 2009.

We burn, we pine, we perish! In 1999, Joseph Gordon-Levitt appeared in "10 Things I Hate About You," a modern retelling of Shakespeare's "The Taming of the Shrew." JGL played the new kid at Padua High School, Cameron James, who develops a massive crush on Bianca Stratford (Larisa Oleynik) and does whatever it takes to win her affection.

In 2001, NBC aired its final episode of "3rd Rock from the Sun," on which Joseph Gordon-Levitt starred as Tommy Solomon. He's since appeared in many films over the decades including "Inception," "Hesher," "Premium Rush," "The Dark Knight Rises," "Looper," "Mysterious Skin," "G.I. Joe: The Rise of Cobra" and "Snowden." For his starring performances in the romantic dramedy "(500) Days of Summer" and the dark comedy "50/50," Joseph was nominated for a Golden Globe for best actor in a movie musical or comedy in 2009 and 2011, respectively. 2013 marked JGL's directorial and screenwriting debut with the release of "Don Jon," in which he also starred. More recently, he was seen in 2020's "Project Power" and the legal drama "The Trial of the Chicago 7." Joseph tied the knot with technology company founder Tasha McCauley, with whom he has two sons, in 2014.

In 1997's "The Wedding Singer," Adam Sandler took on the titular role of wedding singer Robbie Hart, who, after getting left at the altar by his fiancee, falls for waitress Julia Sullivan (Drew Barrymore).

Adam Sandler went on to star in more popular films like 1999's "Big Daddy," 2002's "Mr. Deeds," 2005's "The Longest Yard," 2006's "Click," 2010's "Grown Ups" and 2011's "Just Go with It." He also reunited with "The Wedding Singer" co-star Drew Barrymore for two more films: 2004's "50 First Dates" and 2014's "Blended." While he's long been known for his comedic roles, the New York-born actor has also received critical praise for his roles in dramas like "Punch-Drunk Love," "Spanglish," "Reign Over Me" and "Funny People." For his starring role as gambling addict jeweler Howard Ratner in 2019's "Uncut Gems," Adam earned a Critics' Choice Movie Award nomination for best actor. The comedic star — who in 2015 began releasing new movies via a lucrative distribution deal with Netflix (including the wildly popular 2019 film "Murder Mystery" opposite Jennifer Aniston) — was most recently seen in the streaming service's "Hubie Halloween" in 2020. Adam married model-actress Jackie Titone in 2003. They share daughters Sadie and Sunny.

Tom Hanks memorably landed co-starring roles in two Nora Ephron classics, both alongside Meg Ryan: 1993's "Sleepless in Seattle" (pictured) and 1998's "You've Got Mail." In the former, he played widower Sam Baldwin, who is pursued by a Baltimore journalist. In the latter, he played Joe Fox, a business exec who finds himself in an online romance with his business rival.

Everyone knows Tom Hanks! The two-time Oscar winner went on to star in many more films, including five collaborations with director Steven Spielberg: "Saving Private Ryan," "Catch Me If You Can," "The Terminal," "Bridge of Spies" and "The Post." A few additional critically acclaimed works include "Apollo 13," "The Green Mile," "Cast Away," "Saving Mr. Banks," "Captain Phillips" and, of course, all the films in Disney's "Toy Story" franchise. His performance in the 2019 biographical drama "A Beautiful Day in the Neighborhood," in which he plays beloved television personality Fred Rogers, earned him best supporting actor nominations at the 2020 Academy Awards, Golden Globes, Critics' Choice Awards, SAG Awards and BAFTA Awards. The 2014 Kennedy Center Honor and 2016 Presidential Medal of Freedom recipient, who wrote and starred in the 2020 war film "Greyhound," is set to appear as Colonel Tom Parker in an upcoming untitled project about Elvis Presley. 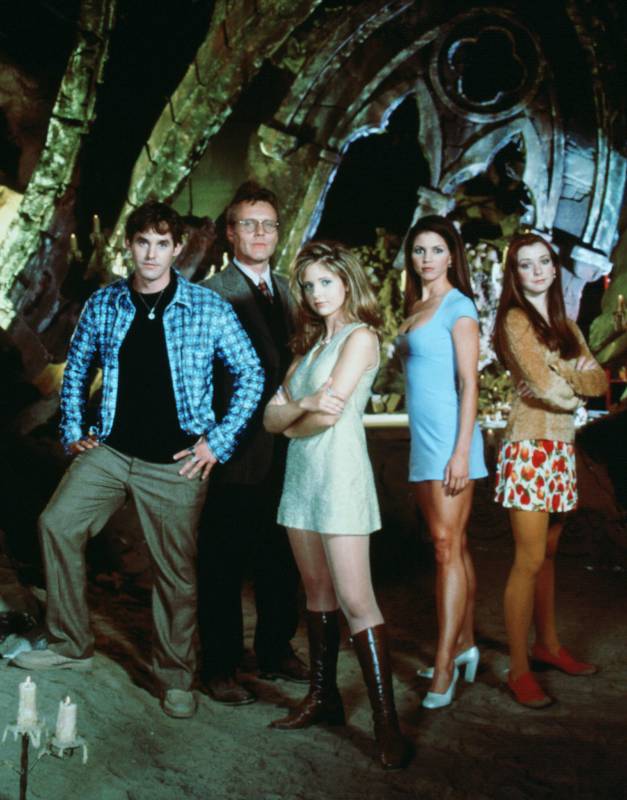 Up Next 'Buffy' then and now