It's definitely still on for Ben Affleck and his new girlfriend Lindsay Shookus. According to E! News, the couple spent some time enjoying each other's company in New York City over the weekend. On Sunday, Aug. 20, the pair hit Barneys together, where Lindsay eyed some jewelry. Later, when Ben was stopped by fans, he posed for a few selfies and signed autographs before returning to his hotel with Lindsay. That evening, the actor and "Saturday Night Live" producer headed to Greenwich Village for dinner at the French-American hotspot Mas (farmhouse). Ben and Lindsay, both of whom are going through divorces, were reportedly friends for years before they began dating.

Ah, the joys of dating royalty. Meghan Markle's visits to London have reportedly been made a little saner courtesy of her boyfriend Prince Harry. After the actress discovered her arrivals at Heathrow Airport were met with onlsaughts of paparazzi, Harry began picking her up directly from the plane, according to British tab Express. "It's been happening for a while," said a source. "Harry has a police escort on the tarmac in his black Audi RS6. He is accompanied by a bodyguard, with a people carrier following behind. Meghan usually only carries hand luggage. If she does check a suitcase into the hold it is put on last so it can be located as quickly as possible. All the necessary security checks must be carried out in advance or onboard because she walks straight from the plane steps to Harry's car." A rep for Heathrow said all travel information and arrangements made for members of the Royal Family are confidential, but former head of royalty protection Chief Superintendent Dai Davies said he doesn't "find it that unusual" that Harry's girlfriend would be allowed to skip the usual procedures involved in arriving in the U.K. Rumors that an engagement is on the horizon for the couple have gained steam all summer.

Chrissy Teigen would like all of you actual ballerinas out there to take a chill pill and quit worrying about her ankles. After sharing a video on Instagram that showed her wearing pointe shoes and attempting to dance on her tiptoes, a slew of followers warned her she could really hurt herself up there if she isn't properly trained. "I have been in love with watching ballet since I was young," Chrissy wrote alongside the clip (via Us Weekly). "I was given shoes from a performance John planned for me a few years ago. Tonight, I tried them on. IT IS HARD. Shout out to the ballerinas I love, and have loved, so so much." Commenters soon filled the post with notes like, "Please be careful. Ballerinas do this for years to work on point" and "Be extremely careful when on point it's very easy to break an ankle if you're not doing it correctly or if you have weak ankles!" Eventually, Chrissy chimed in on her own post. "I get it," she wrote. "I could have broken an ankle. You can stop telling me. If only you knew the other 1000 bone-breaking things I attempt daily."

Happy birthday, John Stamos! The actor turned 54 on Saturday, Aug. 19, and celebrated the big day with some old friends. Putting their arms around each other for a photo at an outdoor screening of "Some Like It Hot" in Los Angeles, John and his "Full House" cohorts Lori Loughlin and Dave Coulier were all smiles amid their impromptu reunion. Earlier in the day, John shared a photo of himself as a little boy and thanked his followers for the birthday messages he'd received. "It's a wonder just how much of life sits before me eagerly (almost impatiently) waiting to reveal it's gentle, imperfect, often unimaginable beauty," he wrote on Instagram. "When I've been willing to suspend my judgment, hold my criticism, proactively find the positive, and most importantly embrace wonder, I've found authentic happiness. To stumble safely this far together is a real wonder. Thank you for the lovely birthday wishes. Sending you much, much love!"

John Stamos wasn't the only celeb who celebrated a birthday over the weekend. On Sunday, Aug. 20, Demi Lovato turned 25 — a milestone her longtime pal Nick Jonas paid tribute to with a sweet message on Instagram. "Happy birthday @ddlovato we've seen a lot of life together already.. much more to come as well. I admire you so much and am so grateful to have you in my life. Wish I could be with you today to celebrate!" he wrote. "I know you won't ever let me live it down that you're a month older than me. 😏," Nick joked at the end of the post. Nick turns 25 on Sept. 25.

Families fight. That's how JAY-Z summed up the infamous 2014 incident in which Solange attacked him in an elevator after the Met Gala. "I fought my brothers and argued with my brothers my whole life. It just so happens, who we are, these things go into a different space, but it ain't nothing," Jay said on the podcast "Rap Radar" last week. "We had one disagreement ever. Before and after we've been cool. She's like my sister. I will protect her. That's my sister, not my sister-in-law, my sister." The argument reportedly started over issues related to Jay's alleged infidelity and as TMZ reminds us, he seemed to take the blame for what went down in his new song, "Kill Jay Z." "You egged Solange on/Knowin' all along, all you had to say you was wrong," he raps on the track. In the months after security footage of Solange kicking and hitting her brother-in-law surfaced online, Solange said she Jay "are all good."

Leslie Jones on Donald Trump's 'SNL' slams: 'We loved that'

In December, after the cast of "Saturday Night Live" dissed Donald Trump with an Alec Baldwin-centric parody, the president slammed the show on Twitter. "Just tried watching 'Saturday Night Live' — unwatchable! Totally biased, not funny and the Baldwin impersonation just can't get any worse," he wrote, adding a "sad" for good measure. Speaking to the New York Times, Leslie Jones admitted the cast was all for his negative reaction. "We loved that. Of course we loved it. You just want to see him turn red and orange, all the colors," the seemingly delighted comic said in the interview. Asked what inspired the sketch where she campaigns for the chance to play the Donald on the show, she explained: "Everybody else was imitating Trump, so I was just like, I want to see if I can do it. And I knew it would be funny. Honestly, the whole concept was that Lorne [Michaels, the show's creator] wasn't going to let me do it. So we wrote the sketch like he was going to say no, and he loved it." Leslie also opened up about how it felt to talk about having been hacked on "Weekend Update," telling the Times that dealing with something like that is part of her job. "That's what comics do," she said. "You're not a good comic if you don't face your pain right off. That's like the No. 1 rule on a comic's list. You help a lot of people when you do that. You can't ignore the elephant — you've got to make the elephant laugh. Me and the elephant are friends."

Rose Byrne and Bobby Cannavale are expecting Baby No. 2

Congrats are in order for Rose Byrne and Bobby Cannavale! In a new interview with Jones magazine, Rose confirmed she and her partner are expecting their second child. "I'm a little tired but feeling good," she said, according to Us Weekly. "Everyone was very sweet on set today, and you always get a little bit more attention when you're pregnant, which is fabulous." The couple welcomed their first child, Rocco, last year. Asked if she thinks her children will go into the performing arts like their actor parents, Rose, mused, "I remember doing the film 'The Rage in Placid Lake' years ago with Ben Lee, about the kid who rebelled against his bohemian parents and became an accountant. Maybe my kids will want to do something really different, like run a granola company or become accountants themselves."

Kylie Jenner explains why she and Tyga split

After years of dating and more than a few splits, Kylie Jenner and Tyga finally called it quits this past spring. On the latest edition of "Life of Kylie," the reality star, who's now dating Tracis Scott, shared for the first time what drive her and Tyga apart. "There was absolutely not one thing wrong with me and T. He and I will always, always have a bond," she said (via E! News). "There was no crazy fight, we just decided … Well, I decided that I'm really young. I don't want to look back in five years from now and feel like he took something from me when he's really not that type of person."

Sarah Silverman and more celebs tweet about the eclipse

As the general mania about the total solar eclipse on Monday, Aug. 21, grew over the weekend, some celebs realized they weren't quite prepared for the event. "F— I didn't get eclipse glasses. How am I suppose to remember to not look in the sky when it's suddenly dark tomorrow morning????" Sarah Silverman tweeted (via HollywoodLife). Chelsea Handler, meanwhile, used the eclipse as an excuse to daydream about a possible end to Donald Trump's presidency. "Wouldn't it be nice for the eclipse to coincide with trump's resignation and/or arrest. Preferably in his underwear and handcuffs?" she tweeted. Neil deGrasse Tyson only hinted at politics ahead of the eclipse, tweeting, "The divided United States of America will unite today, sharing a cosmic event predicted by the methods and tools of science." Finally, while the rest of the world duked it out for that last pair of eclipse glasses, Katy Perry managed to remain calm. Her plan? "Sleeping through the eclipse tomorrow just to be different ok." Seems like a good way to avoid eyeball searing … 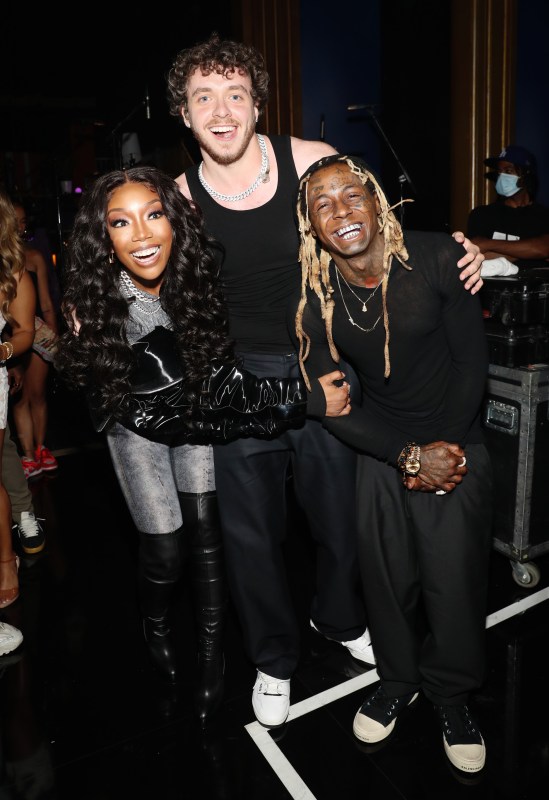 Up Next Best of the BET Awards