Kim Kardashian has beautiful, tan skin; and she likes to show it off, not only for the paparazzi beach patrol, but also for her Twitter followers. Too bad this trip to Mexico left her burnt like a fried Cheeto in the sun. We approve of her Chester the Cheetah string bikini, though.

Katy Perry and her new bestie Rihanna were recently spotted on vacation in Barbados. Of course, it wasn't too hard to spot Perry in this psychedelic, Pucci-print two piece. She gets props for sticking to her retro style, even on the beach. But we're worried about the unavoidable mid-tummy tan line incurred by a full-coverage bottom.

"Modest" and "Paris" aren't two words we often say in the same sentence, but it appears as though the Hilton heiress is taking a cue from Katy Perry and attempting a little extra coverage by tying a sarong over her string bikini. The jet black wrap, bright aqua suit and white shades form a chic, '80s-inspired "That's hot!"-worthy ensemble on the beach in Hawaii.

Paris isn't the only celeb highlighting a golden tan with an aqua blue bikini. Brooke Hogan also knows the oldest trick in the "beach blond" book. The Hulk's daughter looks taut, tan and tough while filming the video for her new single.

Here it is again, the ubiquitous aqua bikini. It's hard to be sure from this angle, but either that's supermodel Gisele Bundchen or the hottest marionette on the beach in Costa Rica.

Not many forty-somethings can rock a teeny red bikini, but Cindy Crawford pulls the beachy feat off with supermodel aplomb. She smartly protects her still-youthful complexion with a stylish, floppy straw hat. And her husband Rande Gerber, also a former model, is no slouch himself. He must do the Cindy Crawford workout, too.

While filming a scene from the upcoming film "You May Not Kiss the Bride" in Hawaii, former "American Idol" favorite Katharine McPhee strips down to a red bikini. But — oops! — she forgot to take off her sweater vest before getting in the water. We doubt this cover-up will catch on, and "Bikini Girl" definitely wouldn't stand for it.

Now that Lauren Conrad is off "The Hills," she seems to be spending a lot more time on the sand in Malibu showing off her golden tan. We dig her red and white striped bikini, matched with blue shorts and red shades. Somehow LC manages to stay sailor girl chic in a world full of trashy reality TV beach bimbos.

Meanwhile, back in Hawaii, "Rock of Love 2" runner-up Daisy De La Hoya films her own dating-show spin-off. We're glad to see the show's stylist found a bikini that matches Daisy's body art — or is that yet another elaborate tattoo?

In a sea of blue suits, "Laguna Beach" babe Kristin Cavallari sets herself apart in a lime green-kini. The wannabe actress made a special appearance at Cosmopolitan magazine's second annual Bikini Bash in Miami. That's weird, cuz we were only invited to Cosmo's One-Piece Suit Soiree. Whatever.

Birthday girl Kourtney Kardashian celebrates her special day on the beach in Mexico. Kim even let her sister borrow the coveted gold bandeau bikini — but only for this one day — and Khloe better not even think about it. 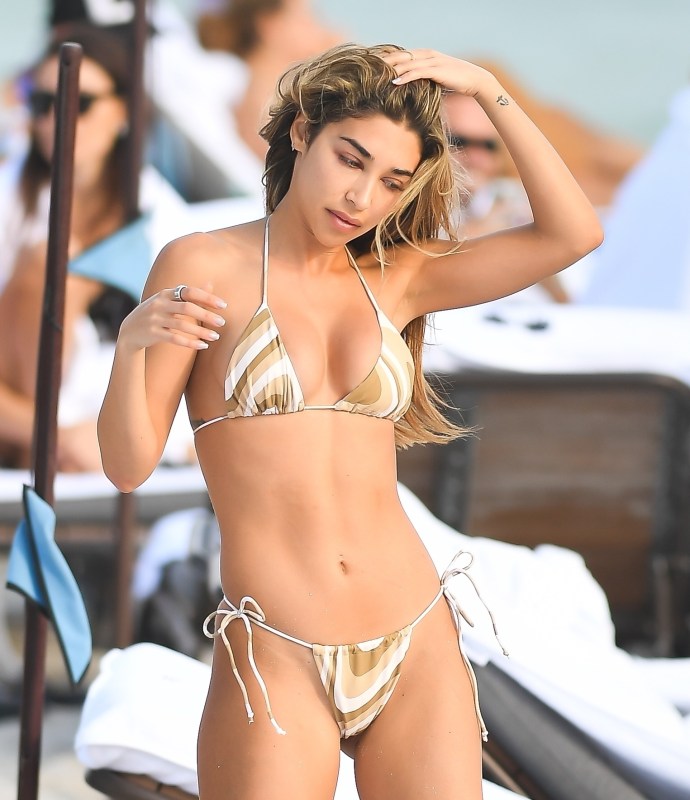