Is there a reality television curse? Many reality couples call it quits after letting cameras into their homes — especially those featured on Bravo's "Real Housewives" franchises. Wonderwall.com has rounded up the duos who've filed for divorce after joining a "Real Housewives" show, from mid-season splits to reunion breakup bombshells. Spoiler alert: "The Real Housewives of Orange County" franchise tops the list in number of failed marriages! First up is one of the more lengthy and dramatic divorces… Fans got invested in the romance of Bethenny Frankel and Jason Hoppy as they watched their courtship on "The Real Housewives of New York City." They even watched them get engaged, walk down the aisle and welcome daughter Bryn on Bravo spinoffs "Bethenny Getting Married?" and "Bethenny Ever After." Fans also had a front row seat to the couple's demise after four years. They split in 2012 and went head to head over financial and custody issues in a battle that continued for nearly a decade until their divorce was — at last — finalized in January 2021.

Keep reading to see more Bravolebrities who threw in the towel…

"The Real Housewives of Beverly Hills" star Camille Grammer's contentious split from actor Kelsey Grammer was a doozy. She announced that it was over at the end of season 1 in 2010. They'd been married for 13 years and shared two children at that point.

The OG of the OC Vicki Gunvalson might have attempted a vow renewal while cameras rolled on "The Real Housewives of Orange County," but that didn't seem to help matters. She split from second husband Donn Gunvalson in 2014 after 20 years of marriage — also while cameras were rolling.

One "Housewives" star who's gone through two divorces in front of the cameras? Luann de Lesseps, who — when we met her at the beginning of "The Real Housewives of New York City" in 2008 — was married to Count Alexandre de Lesseps. The couple's marriage was featured on the first two seasons of the Bravo show ahead of their split in 2009 after two children together and 16 years of marriage. Fans got to see her subsequent romances and even one more marriage and divorce over the years…

Luann de Lesseps married Tom D'Agostino in 2016 on New Year's Eve after their controversial relationship was a focal point of season 8 of "The Real Housewives of New York City." Tom was infamously caught kissing another woman during the season, and other ladies tried to warn Luann, but she went through with the wedding anyway — only to divorce him seven months later in 2017.

Vicki Gunvalson called it! After newlywed Meghan King Edmonds joined the cast of "The Real Housewives of Orange County" full-time in season 10 in 2015, Vicki feuded with the younger Bravo star, predicting that Meghan would split from her husband, former MLB player Jim Edmonds, and that their marriage wouldn't last five more years. It turned out she was right: They were dunzo in 2019. The split came after Jim found himself at the center of a cheating scandal and despite trying to work through it, he filed for divorce that October one day after their five-year wedding anniversary… four years after Vicki's prediction. They welcomed three children during their marriage.

Taylor Armstrong and Russell Armstrong's marriage was a focal point on "The Real Housewives of Beverly Hills," with Taylor even defending their controversial and allegedly abusive relationship against split rumors throughout season 1. Unfortunately, the rumors were true, and after they ended it in July 2011, things took a dark turn. A month after Taylor filed for divorce and accused the venture capitalist of domestic violence, Russell died by suicide.

Though we recently saw her marry Mike Hill on "The Real Housewives of Atlanta," when we first met Cynthia Bailey, she was seeing Peter Thomas. They got engaged on season 3 of the show and married in 2010. They even had a vow renewal in 2012! But they called it quits in 2016.

Some divorces on "Real Housewives" shows aren't shocking, but every now and then, a split goes down that we didn't see coming. That was the case in 2014 when Ramona Singer filed for divorce from Mario Singer. The couple had been featured on the first six seasons of "The Real Housewives of New York City" and attempted to reconcile in 2014 before it was revealed that Mario had once again reunited with his mistress that summer. After 22 years of marriage, during which they welcomed daughter Avery, Ramona made the divorce official.

Tamra Judge and Simon Barney's marriage seemed to fall apart before our eyes on "The Real Housewives of Orange County." Finally, on season 5, Bravo viewers watched them take a limo ride that resulted in Tamra telling him she wanted a divorce. He filed in 2010 after 11 years of marriage and three children together.

Let's just say David Foster doesn't have many fans in the Bravo community. Our next split came in 2015 when "The Real Housewives of Beverly Hills" star Yolanda Hadid announced her split from music bigwig David… amidst the backdrop of her grueling battle with Lyme disease that was covered on camera. The couple had been married since 2011, with David occasionally appearing on screen and Yolanda voicing her worries that her illness might affect the marriage. Their divorce was finalized in 2017 and less than a year later, David moved on with another reality star… former "American Idol" contestant Katharine McPhee.

When Shannon Beador joined the ladies of "The Real Housewives of Orange County" on season 9, she was married to David Beador. The couple, who have three daughters together, dealt with his infidelity as cameras rolled. And though they tried to make it work — David even put together an emotional vow renewal for 2016's season 11 — Shannon announced during the season 12 reunion in 2017 that they would be ending the marriage.

"The Real Housewives of Beverly Hills" star Erika Jayne's glamorous lifestyle existed largely in part thanks to her marriage to wealthy attorney Tom Girardi. She met Tom, who's 32 years her senior, while working as a cocktail waitress in a ritzy Los Angeles restaurant. When she married him in 1999, it marked her second walk down the aisle. On "RHOBH," she showed off her designer wardrobe, extensive glam squad and mansion in Pasadena, California, but their affluent facade shattered in the fall of 2020. That November, Erika announced her split from the lawyer the same month it came to light that the couple was being sued with Tom accused of embezzling funds meant for the families of plane crash victims he'd represented.

Viewers watched Lynne Curtin and Frank Curtin's money woes on "The Real Housewives of Orange County" as Lynne appeared on seasons 4 and 5 with her husband and two daughters. After 22 years of marriage, Lynne pursued a divorce in 2012 but Frank never appeared in court or responded to the divorce filing, nor did Lynne, resulting in the case being dismissed and Lynne having to file once more in 2019.

"The Real Housewives of Atlanta" star Phaedra Parks split from husband Apollo Nida in 2014. The couple had been married for five years and shared two sons and had been featured on the Bravo show together for four seasons at that point. The same year they split, Apollo pleaded guilty to fraud and was given an eight-year prison sentence. Their divorce was ultimately finalized three years later in 2017.

Jules Wainstein was a one-season wonder on "The Real Housewives of New York City," appearing on the show for season 8 in 2016. That same year, she announced that she was splitting from husband Michael Wainstein. The couple, who'd been married for eight years at that point and had two children together, finalized their divorce in 2020.

One of the original "The Real Housewives of Orange County" cast members, Jeana Keough, split from husband Matt Keough, a former MLB star, in 2007 — three seasons into her stint on the series. The couple shared three children and had been married for 23 years. Their divorce took more than 20 years to finalize but ultimately was made official in November 2019. Matt passed away less than a year later in May 2020.

Though Carlton Gebbia only did a brief stint on "The Real Housewives of Beverly Hills," appearing on season 4, she wasn't immune to the reality curse. The memorably goth-loving housewife was married to David Gebbia for 20 years before he filed for divorce in 2017. The couple share three children.

Teresa Giudice and Joe Giudice quickly became stars when "The Real Housewives of New Jersey" debuted in 2009. The couple had four daughters and had been married for 10 years at the time. They called it quits 10 years later in 2019. The duo split following years of legal woes that resulted in both of them doing time in federal prison and Joe ultimately being deported back to his native Italy in October 2019.

"The Real Housewives of Orange County" star Kelly Dodd started the show married — she and Michael Dodd, who have a daughter, were featured on her first two seasons of the show, 10 and 11 — but by 2017, they were done. They'd been married for 11 years. On season 15, Kelly was engaged to a new beau, Fox News star Rick Leventhal, whom she married in 2020.

Another "The Real Housewives of Orange County" marriage that bit the dust? Gina Kirschenheiter and Matthew Kirschenheiter's union. When Gina joined the show for season 13 in 2018, her husband didn't appear with her, as most do. Viewers didn't know that the couple was, in fact, quietly separating off camera. Though they attempted to reconcile in 2019, a month after that, news broke revealing Gina had filed for a restraining order against Matthew and that he'd been arrested on suspicion of domestic violence. The couple, who share three children together, finalized their divorce in January 2020.

Viewers saw this one coming! "The Real Housewives of Beverly Hills" star Adrienne Maloof and her husband, "Botched" star Dr. Paul Nassif, bickered on screen for years before calling it quits in 2012 during season 3. By that point, the couple had been married for 10 years and shared two sons. Their divorce was finalized that November.

Prior to her time on "The Real Housewives of Atlanta," Porsha Williams appeared on a different reality show — "Platinum Weddings." She married former NFL star Kordell Stewart on that show back in 2011, a year before she joined the cast of the Bravo series. In 2013, Kordell filed for divorce, which Porsha addressed on the season 5 reunion, claiming she was "blindsided" and had found out about their split via Twitter. It was finalized by that December, with Porsha infamously receiving nothing in the settlement.

Alexis Bellino and Jim Bellino's marriage wasn't a fan favorite on "The Real Housewives of Orange County," but they remained together during her four seasons on the show. It wasn't until five years after she left the series that they split after 13 years of marriage and three children together. 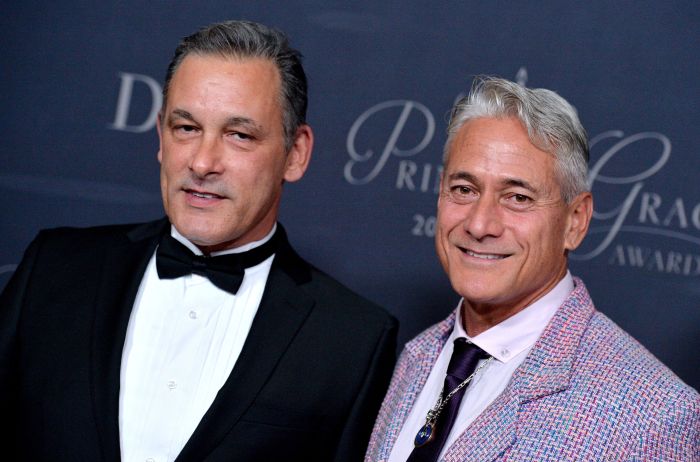