Ewan McGregor and his estranged wife file dispute over support

Ewan McGregor and Eve Mavrakis are still trying to work out the terms of their divorce. In new court documents excerpted by The Blast, Ewan asserts he's been overpaying Eve for the cost of living expenses for her and their four children, Clara, 22, Jamyan, 16, Esther, 16 and Anouk, 7. Ewan also says he's been making the payments "voluntarily." Eve sees things a bit differently. In the jointly filed document, she says Ewan should be forking overmore, not less, to the family. Ewan and Eve announced in January they were ending their 22-year marriage. It was later reported that Ewan had moved on with his "Fargo" costar, Mary Elizabeth Winstead, a move that sparked some difficulties for Ewan and Eve's eldest daughter, who attacked the actress in a social media comment before explaining last month that she knew the comment wasn't "the right way to go about things," but she had been "angry and upset" about the changes taking place in her family.

Just a couple of days after Pink returned home from the Australia leg of her Beautiful Trauma world tour, the singer's family dog passed away. She announced the sad news on Instagram on Sunday, Sept. 30, writing, "Goodbye Kiss 💔 Frangelica 'Nanni' Moore Hart. 2002-2018," alongside a photo that showed her giving her pooch a kiss. "Rest in sunshine pretty girl," she added. "Thanks for waiting for me to get home." It's been a difficult summer for Pink, who was in and out of the hospital with cold and flu symptoms that seem not to have completely gone away yet. In late August, Pink also revealed her son, Jameson, had caught hand, foot and mouth disease.

RELATED: Celebs and their pets in 2018

Khloe Kardashian seems to be taking a recent dose of social media backlash in stride. Last week, the new mom got into a back-and-forth with Twitter users who took issue with her claim that in her "household, we do not see color. We see emotion and action. We see love." Though she meant the statement as part of a larger response to a racist tweet about her daughter, True's skin tone, users were quick to tell her a failure to see color can be interpreted as a lack of awareness about the racism African-Americans face. Some of the comments suggested Khloe would need to prepare her daughter, whose father is black, for some of that reality. Khloe initially responded calmly, tweeting (via E! News): "We need to learn to praise all skin tones/ethnicities! Our beauty is in our differences. We can learn so much! So proud of every human who is confident in who they are. I'm in my 30s I think I'm just finding this confidence. So I am patient with others. But allow me to voice mine." A few days later, she seemed to still be thinking about what had been said. "Don't ever feel bad for making a decision about your own life that upsets other people," she wrote on her Instagram Story on Sunday, Sept. 20. "You are not responsible for their happiness. You're responsible for your own happiness Anyone who wants you to live in misery for their happiness should not be in your life to begin with." She then attributed the sentiment to "F–kology."

Between his pro-Donald Trump rant, his "Make America Great Again" hat wearing and his declaration that we should ditch the 13th Amendment, Kanye West's certainly getting plenty of attention this week, for better or worse. things may b different for the controversial star at home, though. In the latest edition of "Keeping Up With the Kardashians," 'Ye's wife, Kim Kardashian West, admitted she thought the rapper was feeling a bit overlooked by her now that they have three children. "I think so many husbands feel neglected when you start having kids and then all of their attention gets taken away," Kim said on the show (via UsWeekly). "I remember it was really hard for North when Saint was born, so I kind of put everything into North to make her feel extra special," she explained. "And now with Chicago, I'm trying to work even [harder] to make sure North and Saint feel like they have enough time with me and they feel super loved and that no one is going to take their place." Khloe, meanwhile, seems to feel Kanye's pain. "Sometimes men still want to be treated as, like, the first baby," she said on the show. "I know Kim is so overwhelmed and I think sometimes it's easy to get distracted. But your husband still wants you to take care of him. I'm sure with three kids you're tired at the end of the day and you don't make that a priority, but she really has to."

Speaking of Kanye West and attention … stars including Questlove, Lana Del Rey and Chris Evans were busy giving the rapper their undivided negative attention after he tweeted that the 13th Amendment — which abolished slavery — should be ditched as it currently stands. "This represents good and America becoming whole again," he wrote under a photo of himself wearing a red "Make America Great Again" hat. "We will no longer outsource to other countries. We build factories here in America and create jobs. We will provide jobs for all who are free from prisons as we abolish the 13th amendment. Message sent with love." E! News notes writer Yashar Ali clarified that the amendment "allowed for prisoners to be used as slave labor" and that is sounded as if that was the part Kanye wanted to get rid of, despite not having said that explicitly. Kanye, a vocal fan of Donald Trump, also went on to clarify that he feels the amendment allows "slavery in disguise, meaning it never ended." Those posts did little to quell the uproar, though. Questlove posted, "lol y'all so heartbroken, we ain't even typing his name," in reference to 'Ye's comments, adding, in part, "I'm kinda sad man." Chris Evans had nothing to "LOL" about. "There's nothing more maddening than debating someone who doesn't know history, doesn't read books, and frames their myopia as virtue," he posted. "The level of unapologetic conjecture I've encountered lately isn't just frustrating. It's retrogressive, unprecedented and absolutely terrifying." Josh Gad agreed in the comments, while Lana Del Rey weighed in on Kanye's Twitter comments with this: "I can only assume you relate to his personality on some level. Delusions of grandeur, extreme issues with narcissism—none of which would be a talking point if we weren't speaking about the man leading our country. If you think it's alright to support someone who believes it's OK to grab a woman by the p—y just because he's famous then you need an intervention as much as he does—something so many narcissists will never get because there just isn't enough help for the issue." She signed off with: "Message sent with concern that will never be addressed."

If you were wondering what "the cost of a fairytale" in 2018 might be, Express UK has your answer. The British outlet recently released a breakdown of the cost of Prince Harry and Duchess Meghan's royal wedding — and it's a doozy. Turns out Harry and Meghan's nuptials cost the government a total of about 32 million pounds or $41,748,736. Most of that expenditure was reportedly earmarked for security, although Meghan's Claire Weight Keller-designed gown was estimated to have cost over $509,000. The Duke and Duchess of Sussex also far outspent Harry's brother, Prince William and Duchess Kate on the wedding cost front. Kate's Alexandra McQueen wedding dress has been valued at about $326,375. Express reports Will and Kate's total wedding costs added up to about 8 million pounds or $10,444,000 less than Harry and Meghan's.

Halsey celebrates her birthday in Italy with on-again beau, G-Eazy

After a brief split earlier this year, Halsey and G-Eazy are definitely — and officially — in love again. The couple made that clear on social media over the weekend in multiple posts from Venice, Italy. While Halsey gushed that G-Eazy is the "sweetness of my whole damn life 🍬," on Instagram, her on-again beau posted a sweet birthday message for the singer, who turned 24 on Sept. 29. "Happy birthday to this one," the rapper wrote, sharing a photo of Halsey. "I love you so so so much and I always will. I myself, along with millions and millions of other people appreciate you more than you'll ever know. You're the brightest star in the sky. So grateful to get to travel thru life with you, so happy to call you my queen. Happy birthday baby." Sounds like the birthday girl had a particularly fantastic day, too. Commenting on G-Eazy's b-day wish post, she wrote, "best birthday ever."

The months before Bradley Cooper started filming "A Star Is Born" were packed with preparation for the role and for the film itself, which Bradley directed and wrote. Things didn't exactly settle down for Bradley once he and Lady Gaga got on-set, either. In his new W magazine cover story, the actor recalls, "I'd wake up and work out, followed by two hours of guitar practice and two hours of piano lessons. Lunch. Then Lukas Nelson [Willie Nelson's son], my collaborator, would come over, and we'd write music for one and a half hours. I'd write the screenplay for the rest of the day." He goes on to say that he and his girlfriend, Irina Shayk, got lucky with timing when it came to the arrival of their first child and the production schedule for "A Star Is Born." "Irina was pregnant, so it was kind of perfect," he explains. "Lea was born a week before we started shooting." Um. Something tells us Irina may have found that timing less than perfect …

Porsha Williams is having quite a month! The pregnant "Real Housewives of Atlanta" star recently got engaged to her boyfriend, Dennis McKinley, according to E! News, which noticed Instagram fan pages for the show posting photos that showed Porsha wearing a large diamond ring on her left ring finger. The website confirmed the couple is engaged, noting Dennis' proposal is set to appear in a future episode of the show. Porsha announced she and Dennis are expecting their first child together last month on Instagram.

Meghan McCain will return to 'The View' next week

After taking a month off from "The View" in the wake of her father, Sen. John McCain's death, Meghan McCain tweeted that she "will be getting back on the horse ⁦@TheView⁩ Monday October 8th," adding a note of gratitude for the "patience and understanding" of her friends and followers. The post also suggested, if implicitly, that when "The View" co-host returns to work next week, she'll do so with a focus on some of the things her father stood for: an Arizona Republic cartoon accompanied Mehgan's post, showing her as a boxer with the word "dad" written on one glove. Meghan's dad died after losing his battle with brain cancer on Aug. 25. 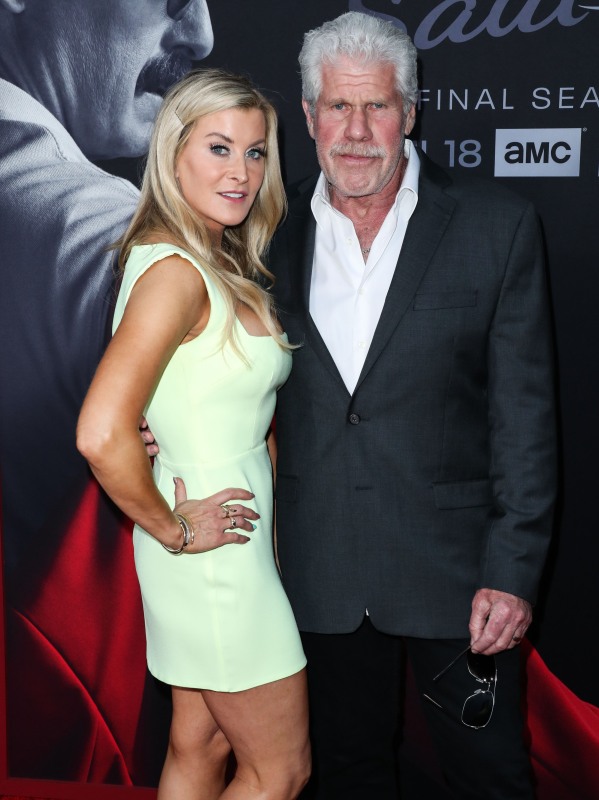