Is an engagement on the horizon for Taylor Swift and Joe Alwyn? The singer, 32, and actor, 30, reportedly snuck off together last week for a romantic, three-day escape to the quaint, seaside town of St. Ives in Cornwall, England. "Taylor's a superstar and obviously very wealthy … but to go that far just for a few days clearly meant a lot to them," a source told The Sun over the weekend. "It feels like things are getting more serious and people think an engagement could be on the cards. That could explain such a long journey to a specific place." According the The Sun, Taylor and Joe traveled from her home in Nashville and stopped first in London, where they share a townhouse, before continuing on to St. Ives, where they reportedly rented a luxury home for their three-night stay. The singer and "The Favorite" actor were first linked romantically in 2017, and while fans seem pretty convinced their romance has inspired at least a few of Taylor's latest lyrics, she explained in her 2020 "Miss Americana" doc that she and her guy "decided together we wanted our relationship to be private."

RELATED: See which stars have gotten engaged in 2022 so far

Joss Whedon is finally addressing claims he was abusive and fostered a toxic work environment on the sets of shows like "Buffy the Vampire the Slayer" and films like "Justice League." The allegations surfaced in 2020, with Ray Fisher accusing the director of "gross, abusive, unprofessional, and completely unacceptable" behavior on "Justice League." "Buffy" alum Charisma Carpenter claimed on social media that Joss had a "history of being casually cruel," called her "fat" when she was pregnant and asked if "was going to keep" the baby and eventually fired her after she gave birth. Michelle Trachtenberg, meanwhile, said on social media that when she was 16 and working on "Buffy," there was an informal rule that she couldn't be alone with Joss on set. In a long New York Magazine feature published this week, Joss said he had "no idea what [Michelle] was talking about," but said he was "young" when he became showrunner on "Buffy." "I yelled, and sometimes you had to yell. This was a very young cast, and it was easy for everything to turn into a cocktail party," he said. Joss also denied allegations he grabbed the arm of a costume designer and dug his nails into her skin, telling the interviewer, "I know I would get angry, but I was never physical with people." Joss also denied Ray Fisher's allegations, including his claim he lightened the skin tone of Ray's character. Calling that claim "false and unjust," Joss said Ray's Cyborg character was "the worst of all the characters in the film." Of Ray's possible motives, Joss said: We're talking about a malevolent force. We're talking about a bad actor in both senses." As for a report claiming he threatened Gal Gadot's career, Joss said, "I don't threaten people. Who does that?" then suggested Gal couldn't understand what he'd said to her. "English is not her first language, and I tend to be annoyingly flowery in my speech," he said. Asked about his reply, the Israeli actress told the magazine, "I understood perfectly."

Ah, the sweet smell of marital payback! During an interview with "Heart" radio hosts Amanda Holden and Jamie Theakston on Jan. 17, Katy Perry was asked to share her fiance, Orlando Bloom's "worst habit" — and she didn't have to think too hard to come up with an answer. "Oh my God, he loves to floss, which thank God because some partners don't and it's disgusting and he has brilliant teeth," Katy began in the video chat. "But he leaves the floss, everywhere! On the side of my bed, and in the car, and on the kitchen table … I'm like, 'There are bins everywhere!'" Katy seemed more than happy to divulge Orlando's icky dental floss habits to the world, but it turns out he kinda had it coming. A few days before Katy's interview, she posted a gallery of thirst trap pics on Instagram, including a super hot photo that showed her wearing nothing but pants as she threw her hands up against a wall, glancing back sexily at the camera. Buried in a pile of fire emojis and comments like "WOW," "HOT" and "you gonna burn it all down" was one LOL-worthy comment from Orlando, who has a habit of trolling Katy on the 'Gram. "Babe plz," Orlando wrote, "can we get some more hazelnut milk we're running low."

RELATED: The most iconic couples of Grammys past

Halle Berry joined in the chorus of Americans marking Dr. Martin Luther King Jr. Day on Jan. 17 by sharing her thoughts on the civil rights leader's legacy on social media. "GIVE," the Oscar winner wrote on Instagram, along with this quote from Dr. King: "Life's most persistent and urgent question is, 'What are you doing for others?'" Halle went on to write, "Dr. King believed in equality and nonviolence as a means of achieving his goals and fostering a sense of community and finding ways to give back. We can honor Dr. King by wholly embracing his teachings — not just today, but every day," she continued. "Give back to our communities, through connection, action, and guidance; to charities that support causes with messages that need to be heard; and by giving to the younger generation, so that they can experience a world made better by the lasting impact of our actions, and leaders like Dr. King.⁠"

Britney Spears' younger sister, Jamie Lynn Spears, won't promote her new memoir, "Things I Should Have Said" with a national tour, sources told TMZ in a report published Jan. 17. According to the webloid, Jamie Lynn, 30, was asked to travel across the country doing meet-and-greets, signings and other events to get the word out about the book, which includes stories about Britney, 40, not all of them favorable. Jamie Lynn declined, however, because her goal in publishing the memoir was not to make a profit but rather to "address her past, heal from it and move on," sources said. The siblings' relationship has been strained for months, with Britney making the most of her newfound, post-conservatorship freedom by slamming Jamie Lynn on social media for making claims in print and interviews that Britney says are false. Over the weekend, Jamie Lynn posted a plea to her sister on Instagram Stories asking Britney to call her and stop their "embarrassing" public feud.

When Prince died unexpectedly in 2016, he left no will behind, which sparked a long series of legal battles between the estate's heirs and the IRS. Now, nearly six years after the music icon's death, all parties have agreed that the estate is worth $156.4 million — almost twice what the estate administrator, Comerica Bank, claimed it was worth previously. The number includes a valuation for Prince's catalog. "It has been a long six years," attorney L Londell McMillan, who represents the heirs, tells The Guardian. Back in 2020, Comerica filed suit against the IRS on grounds its $163.2 million valuation was based on erroneous information. They reportedly settled on the $156.4 million number and can now start moving towards the distribution phase. Prince was found unresponsive at his home on April 21, 2016, in what was later ruled an accidental fentanyl overdose. Following his death, hundreds of people came forward claiming to be relatives or descendants of the late star before his siblings were identified and named as heirs and millions of dollars were paid in legal fees to sort out the estate, according to Billboard, which reports the estate is now to be split "almost evenly" between the music company Primary Wave and three of Prince's siblings or their families. Taxes on the estate, however, are expected to be in the "tens of millions of dollars" range, according to the outlet.

While promoting her new dance single with Snoop Dogg, "Chai Tea With Heidi" on "Ellen" on Jan. 17, Heidi Klum let it slip that one of her runway-ready legs is worth more money than the other one — at least in the eyes of a certain past client. Heidi, 48, was playing a game with Ellen DeGeneres called "Heidi 'Blanking' Klum" when she mentioned that a client once took out a $2 million insurance policy on her gams. But that $2 million figure wasn't split in half equally, with each leg being covered for a cool mil. "When I was young, I fell into a glass and I have, like, a big scar," Heidi explained. "Obviously I put so much spray tan on right now you can't see it right now but yeah, one was more expensive than the other one. … It's weird the things that some people do," she added with a laugh. According to People, Heidi said in 2007 that her more "valuable" leg was covered for $1.2 million, while the other one was only covered for $1 million.

On Instagram over the weekend, Leah Remini shared a black and white headshot of herself that was taken when she was 16. As she shared in the caption, Leah could never have imagined as a teen growing up in a devout Scientologist family that she'd grow up to become a successful star pursuing a college degree at age 51, since the religion frowns on higher education. "Scientologists are taught that kids are no different from adults," Leah wrote, in part. "So from a young age I was held accountable like an adult and regularly told that anything bad that happened in my life, even things that I wasn't responsible for, was my fault." Leah said she'd already been taken out of school by age 16 and "was working to earn a living to support myself and my family," before explaining that Scientology's founder, L. Ron Hubbard "had a deep disdain for conventional education." Leah wrote that she's "been living and working with an 8th grade education" her whole adult life, describing how the small world she inhabited with her family consisted only of other Scientologists. "I saw a successful acting career as a salvation. It would help me get my family out of poverty and give me a higher standing in Scientology which I truly believed was helping to save mankind," Leah continued. "At the time we were living in squalor with no furniture. Every spare cent we had went to Scientology and I was determined to get my family into better circumstances." She went on to recall being told at auditions that her "brash approach and thick Brooklyn accent" were holding her back until a voice teacher encouraged her to be herself and she started landing acting work. "Had you told me then that I would be a student at NYU at age 51, I wouldn't have believed it. I had big dreams but looking back they were rooted in my desire to survive, not to educate myself. And the idea that I would leave Scientology and work to expose the abuses that members face was not a thought I would even conjure up," she added. Her candid post earned thousands of likes and hundreds of comments. "You're incredible," Leah's pal Chelsea Handler wrote, "and I know it, personally." 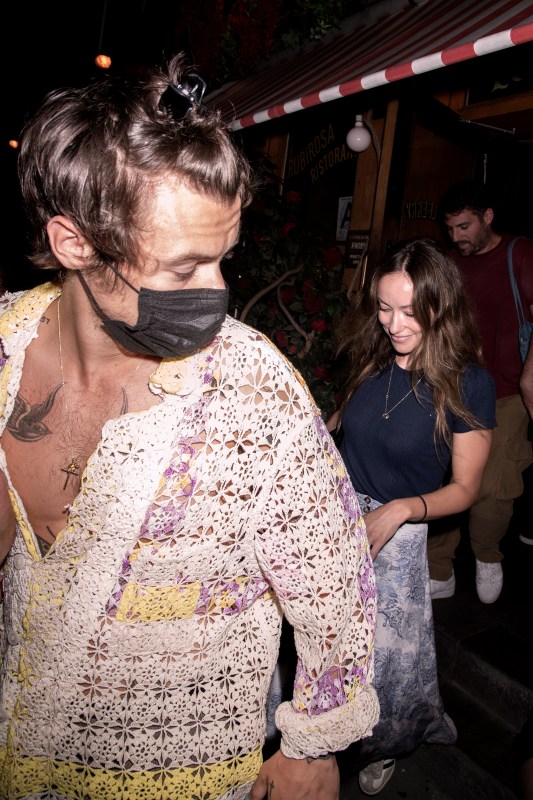