"Empire" star Jussie Smollett visited a hospital in Chicago on Jan. 29 after being brutally attacked and beaten in what is believed to be a hate crime. After flying back to the Windy City from New York, the African-American actor was walking back to his apartment building after grabbing a late-night meal at a local Subway when two men attacked him, put a noose around his neck and doused him in bleach. According to reports, the men shouted, "This is MAGA country." Jussie, 35, suffered a fractured rib and lacerations to his face and neck. The incident happened a week after a threatening letter that was both homophobic and racist was sent to Jussie at the Chicago studio where "Empire" is filmed. (The actor came out as a gay man in 2015.) A few days later, after combing security camera footage, police announced they were seeking two persons of interest who were seen walking in the area. They also said that Jussie still had the rope around his neck when they responded to a 911 call that was placed 40 minutes after the actor was jumped. Hollywood condemned the attack and rallied behind Jussie. President Trump even said it was "horrible." Jussie's family called it an "act of domestic terrorism."

Gwyneth Paltrow is being sued by a man who claims she seriously injured him during a ski crash in Utah in 2016. The man said he was skiing at the Deer Valley Resort when Gwyneth smashed into him because she was skiing out of control, leaving him with four broken ribs and a concussion. He claims the actress skied off without checking on him. Gwyneth's rep said, "This lawsuit is without merit and we expect to be vindicated." The man also claims Gwyneth and her friends all filed a false incident report saying the actress didn't cause the crash. He's seeking $3.1 million in damages.

Ozzy Osbourne postponed his entire European tour due to an illness, he announced on Jan. 29, one day before the tour was set to begin. A press release said Ozzy was diagnosed with a severe upper-respiratory infection. Doctors pleaded with him not to tour, believing the travel schedule, European weather and live performances could make his infection develop into pneumonia. The tour was set to kick off Dublin, Ireland. "I'm completely devastated for having to postpone the European leg of my tour. It just seems that since October everything I touch has turned to s—," the rocker said in a statement. "First the staph infection in my thumb and now coming down with the flu and bronchitis." He said he's rescheduling for September.

"Jersey Shore" star Jenni "JWoww" Farley is accusing her estranged husband of abuse. On Jan. 30, the reality TV star — who filed for divorce last fall — shared a video that appears to show Roger Mathews throwing her to the ground. She also penned an open letter to her ex (and posted it to her website and social media) in which she called him "an abuser to the core." "You have spit at me. You have pushed me. You have shoved me. You have aggressively thrown me to the ground. You have prevented me from closing doors to escape having you come at me," she wrote. "You have belittled and disparaged me. You have threatened me." She even said Roger deliberately mistreated their autistic son, Greyson, by making him skip therapies and feed him food he's "highly allergic" to. "A violent person is who you really are through and through," she alleged, adding that she will be a "victim no longer." Roger responded in a video he posted on Instagram in which he said he and Jenni would address their issues in court and that he'd fight for his children. "I sit here humbly before you today a pretty heartbroken man in light of recent circumstances," he said. "Things that were said about me in a long, rambling rant … that was highly erroneous and had many lies in it." He also insisted, "I know that we have the preponderance of truth on our side. I know that there's a deep-rooted history of this, playing the victim."

Kiss and make up?

Original Kiss guitarist Ace Frehley has accused Kiss frontman Gene Simmons of groping his wife. This one is messy. Earlier in the week, Gene did an interview in which he claimed Ace was fired from the band twice for "drugs, alcohol, bad behavior, being unprofessional." On Jan. 30, Ace swung back with a vengeance, saying he actually quit the band because Gene and fellow Kiss bandmate Paul Stanley were control freaks. He claims Gene is jealous of his successful solo career and also labeled him a sex addict. He then dropped a bombshell: Ace claims Gene groped his wife. "She was planning on pursuing a suit against you, but I told her to call it off!!!" he wrote on Facebook. Ace said he wants a heartfelt apology or an offer to give him his old job back. He added, "The gloves are off."

Done after a decade

Former "Flipping Out" star Jeff Lewis and Gage Edward, his boyfriend of nearly a decade, have split up. Jeff revealed the news on Jan. 31 during his Sirius XM radio show, telling his fans, "We were in separate rooms a significant portion of last year, so it was kind of like a roommate situation." Jeff dubbed himself a "single dad" and claimed their 2-year-old daughter, Monroe, is living with him for the time being. The split was apparently a long time coming. "I think the reason we hadn't ripped the Band-Aid off and separated is because a) we had the baby and neither one of us want to leave the baby and then b) financially, it wasn't the best time because I have four properties right now — three of which are in construction and one of which is sellable," Jeff said.

Just two months after they split in the wake of a cheating scandal, Cardi B and Offset are back together. TMZ reported on Jan. 31 that Cardi is moving back into the Atlanta home she and the Migos rapper shared until early December. "Offset proved himself to his wife," TMZ reported, adding that he changed his phone number and will only use his new line for Cardi and business calls. He's doing all this to "show Cardi he's serious about being honest and faithful." Offset has also instituted a "no groupies" rule when he performs. Over the past several weeks, there have been rumors that Cardi was ready to reconcile. On Jan. 22, she shared a screenshot from a Facetime call with her husband, who could be seen nuzzling their daughter, Kulture, and added hearts and the caption, "I wanna go home." You CAN always get what you want, apparently.

Mystery still surrounds Wendy Williams' absence from her eponymous daytime talk show — she hasn't been on the air since before the holidays! After delaying her return three times in January, the show announced on Jan. 29 that Nick Cannon will step in to temporarily host in early February. Wendy was initially supposed to return on Jan. 7. However, that was pushed back a week, which was then pushed back another week and so on. Now, her return date is undetermined. Wendy took to social media recently to say that the delay is tied to her health — she's been recovering from a fractured shoulder since December and also suffers from Graves' disease — though there have also been unconfirmed reports that there could be a rift between the TV star and her husband, who's also her manager and business partner.

"Fight Song" singer Rachel Platten and her husband, restaurateur Kevin Lazan, have welcomed a baby girl into the world. The singer announced the news on Instagram, revealing that their little princess came last weekend. "Introducing Violet Skye Lazan. Born delicious & cuddly on 1.26, early in the am. There is so much about this massive love that i want to share but don't yet know how to," Rachel captioned a pic of herself sharing some skin-to-skin contact with her daughter on Jan. 30. "I am sure the words will come soon. For now we are busy falling deeeeply in love (and keeping our heads above water). Thank YOU all so much for your kindness and support and curiosity and gentleness as i fumbled my way through this crazy brutal amazing journey to get here to motherhood. Wow. I'm a mom. :))) Xoxo, rach."

The Fiji Water Girl, also known as model-actress Kelleth Cuthbert, is suing the very company that made her insta-famous. Shortly after this year's Golden Globes — which saw Kelleth go viral for photobombing celebrities on the red carpet while holding a tray of water bottles — the company began setting up cardboard cutouts of Kelleth throughout Los Angeles. She claims she did not authorize the company to use her likeness for the campaign. According to Kelleth, her viral moment generated upwards of $12 million in brand exposure, and she thinks she's entitled to some profits. Fiji says otherwise, telling The Blast in a statement, "This lawsuit is frivolous and entirely without merit. After the Golden Globes social media moment, we negotiated a generous agreement with Ms. Cuthbert that she blatantly violated. We are confident that we will prevail in court. Throughout our history, we have had a sterling reputation working with talent." 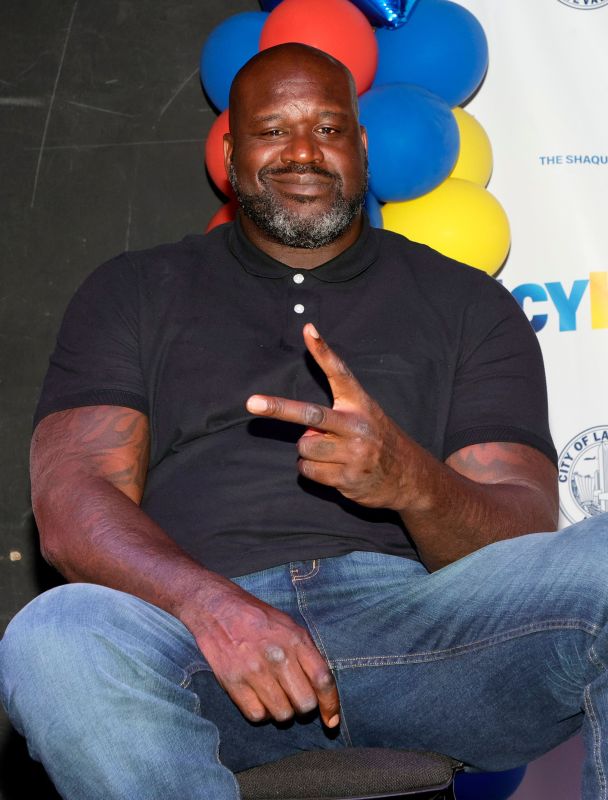