Celine Dion — the queen of music, high fashion and feelings — has been having, as she told the Sun in January 2019, "the best time of my life now" as she embraces her 50s. A large part of that has been because of the joy she's found dressing in haute couture, she explained: "I'm doing this for me. I want to feel strong, beautiful, feminine and sexy." To celebrate this new era of Celine, Wonderwall.com is taking a look at some of the French-Canadian diva's most stylish moments over the years… starting with this bold look. Dare to go bare! Celine hit the streets of Paris wearing an Off-White graffiti-print bodysuit and matching blazer — minus pants — with the Virgil Abloh-led brand's heeled neoprene sandals during Haute Couture Fashion Week on June 29, 2019. Keep reading to see more of Celine's greatest sartorial hits…

Celine Dion struck a fierce pose as she arrived at the RVDK Ronald Van Der Kemp Haute Couture Spring/Summer 2019 show during Paris Fashion Week on Jan. 23, 2019, wearing a bold herringbone-patterned suit by the designer with a chunky gold necklace and a matching bag and pumps.

Celine Dion made heads turn when she stepped onto the 1999 Oscars red carpet wearing this dazzling white reverse tuxedo from Dior Couture. The open back and playful fedora made this dramatic look a total work of art.

RELATED: Celebs without makeup in 2019

Celine Dion signaled her arrival in Paris for Haute Couture Fashion Week on June 27, 2019, when she stepped out ahead of the festivities wearing a $4,400 Chanel capri-length catsuit with double-C chain straps and accessorized with a $1,650 chain logo belt from the same famed fashion house.

Only on Celine! For her arrival at the Folies Bergere Music Hall in Paris on Jan. 25, 2019, Celine Dion wore this dramatic black Alexandre Vauthier Haute Couture jumpsuit with a sheer bandeau top. But her accessories might have been even more extra: a black garrison cap with a netted veil, micro-sunglasses and leather booties.

Celine Dion looked beautiful and chic in this black-and-white Giambattista Valli dress with decorative frills and lace panel inserts that she wore to the brand's July 2016 haute couture show in Paris. The singer matched the ruffled frock with a bold-print duster and accessorized with a pale pink handbag and dangling earrings.

Celine Dion isn't afraid to take risks with her wardrobe, which has paid off in dividends. The singer won praise when she stepped out in Paris in August 2017 wearing this mustard-colored puffy-sleeved jacket decorated with lavender bows and a floral brocade design. She paired it with a simple printed tee and bleach-washed high-waisted jeans.

Strut! Who can pull off a belted maroon Gabriela Hearst leather blazer with a turtleneck, leather leggings, leather gloves, biker boots and cat-eye sunglasses? Celine Dion of course, as she proved while on her way out of Givenchy's Paris offices on Jan. 24, 2019.

Back in 1991 at the American Music Awards, Celine Dion — who was only 22 at the time — looked young and stylish in this shimmery floral mini with a lace-slip hem. Even though it was the '90s, Celine was still rocking some '80s-inspired hair and jewelry, which somehow worked perfectly with this gorgeous metallic dress.

Celine Dion dressed for the "Camp: Notes on Fashion" theme at the Met Gala in New York City on May 6, 2019, in a boldly fringed silver minidress by Oscar de la Renta, a matching headpiece and T-strap Chloe Gosselin heels.

In 2012, Celine Dion stunned in this gold-and-white long-sleeved minidress while performing at the Jamaica Jazz and Blues Festival. The brilliant gold applique and jewel embellishments on the dress made Celine, who paired the look with super-high gold heels, sparkle on stage.

Only Celine Dion can pull off granny chic like this. On anyone else, this Batsheva floral look that the diva wore in Paris on Jan. 25, 2019, and accessorized with a green velvet cropped jacket, netted gloves, amber sunglasses and maroon boots would have looked absurd.

Perhaps Celine Dion was invoking the spirit of Liberace when she wore this very couture all-white Ralph & Russo ensemble while in Lyon, France, in July 2017. From the floor-length cape to the wide-brimmed hat (and those tailored slacks and blouse), Celine looked like a total diva who doesn't just wear clothes, but makes a statement.

Celine Dion struck a pose in a futuristic red gown by Iris van Herpen as she headed to her front-row seat at the Dutch designer's Fall/Winter 2019 show during Haute Couture Fashion Week in Paris on July 1, 2019.

Celine Dion made fashionistas green with envy when she showed up on the 2017 Grammy Awards red carpet in this long-sleeved emerald Zuhair Murad evening gown featuring big shoulders, thousands of tiny sequins, a bow waist and a thigh-high slit that showed off her amazing legs.

Celine Dion isn't just a style maven — she's also got her own line of purses! Celine wore a gorgeous pink belted floor-length Lanvin gown with long sleeves and a high neckline when she debuted her newest purse collection at Browns in Montreal in August 2017.

Celine Dion donned a dramatic red tulle coat look by Oscar de La Renta while out and about in Paris on Jan. 27, 2019.

Celine Dion made her Met Gala debut in May 2017 wearing this black-and-silver Atelier Versace gown with a dramatic headpiece. The couture look, which was embellished with a sequined bodysuit and asymmetrical belt, was designed by Donatella Versace herself. Celine showed her appreciation for the arts by dressing like a masterpiece.

There's a reason you'll often see Celine Dion in a mini — she's got legs for days! The Canadian chanteuse arrived at the "Today" show studios in July 2016 wearing this bold yellow blouse and black necktie look from Gucci that she paired with the label's red, lavender, black and gold high-waisted miniskirt and black heels. The sassy songbird finished it off with super-sparkly diamond jewelry and a pair of oversized shades.

Even back at the 1992 Grammys, Celine Dion had a signature style that was big on bling. Sporting a jewel-embellished bumble-bee minidress paired with black leggings and rhinestone-decorated heels, Celine looked every bit the future fashion icon.

Celine Dion stole the show during a visit to Paris' famed Moulin Rouge on Jan. 24, 2019, wearing a hot pink minidress by Tel Aviv designer Dodo Bar Or that gave off serious '80s vibes. She accessorized with matching silver heeled sandals by Roger Vivier.

Bow-chicka-wow-wow! Celine Dion looked funky fresh as she arrived at the "Tonight Show with Jimmy Fallon" studios in July 2016. Wearing a colorful Versace bell-bottom pantsuit with a coordinated bag and matching boots, Celine added a bit of vintage-inspired swagger to her high-fashion repertoire.

At first glance, the belted mustard-hued shirt dress that Celine Dion wore during Paris Fashion Week in July 2017 appears rather demure, but upon closer inspection, you can see that the material is actually leather, which gives Celine a rock 'n' roll edge. The diva expertly paired the dress from Christian Dior's haute couture collection with a wide black belt, mirrored aviator shades and some gold bling including an estimated $10K Rolex watch.

Celine Dion kicked off Haute Couture Fashion Week in Paris on Jan. 22, 2019, wearing this incredible black sparkling gown with a keyhole cut-out as she arrived at Alexandre Vauthier's show at the Grand Palais.

Celine Dion went full-on Queen Elizabeth with her glam in July 2016 while out in Paris with TV host Carly Steel. The singer wore a mint-hued above-the-knee Gucci dress with a fun floral embellishment plus a matching purse and heels. This look wasn't just classy, it was regal.

Here's Celine Dion at the Grammy Awards in 2010 in one of our favorite looks — a heavily beaded gold Aquilano Rimondi mini with jeweled cuffs and sheer, shimmery sleeves. The singer, who performed alongside Smokey Robinson, Jennifer Hudson and more stars that year in a tribute to Michael Jackson, looked like a sparkling gem on stage.

Looking like the goddess Aphrodite, Celine Dion had all eyes on her at the 2016 Billboard Music Awards in Las Vegas. Wearing a heavily sequined gold Valentin Yudashkin gown with a gathered waist and thigh-high slit, Celine's amazing legs took center stage. She paired the glittery gown with gold Saint Laurent pumps and diamond and gold jewelry.

It's actually pretty rare to see Celine Dion in all-black attire. During Paris Fashion Week in July 2016, she rocked head-to-toe Christian Dior including leather pants and gloves, a black tee and jacket and even a black handbag and made the dark combo look sleek and sexy.

One personal trend Celine Dion has followed faithfully is making sure she sparkles whenever possible. Wearing this jewel-embellished plum minidress while on her "Taking Chances" tour in 2008, Celine looked ultra-feminine and sophisticated while belting out amazing music. Also: Those bracelets aren't playing. Talk about shine!

Celine Dion glittered like a chandelier at the 1997 Academy Awards in this two-tone Chanel dress with a deep V-neck bodice and a front slit in the skirt. She accessorized with a wrap-around shooting-star diamond choker, making her look like she's the center of the universe.

At the 2015 Billboard Music Awards, Celine Dion channeled her inner Amazon in this jade green leather dress from Mugler. She paired the one-shoulder look with sexy animal-print heels and a megawatt smile.

Celine Dion wore this gorgeous powder blue ruffled gown with sheer panel inserts for her then-final performance at Caesars Palace in 2007. (She later returned to the famed Las Vegas venue for her current residency run.) The singer ended the night by posing in a circle of rose petals while waving goodbye to her fans.

With her shoulders covered in a Native American-inspired design of feathers and dangling beads, Celine Dion's look at the 2004 World Music Awards in Las Vegas was surprisingly subdued. Her white V-neck blouse and black slacks were probably the most normal-looking outfit we've seen on Celine over the years.

Celine Dion clearly loves her some Giambattista Valli because she not only returned for the label's Paris Fashion Week show in July 2017 but wore one of the looks that debuted on the catwalk: a pink-and-white patterned long-sleeved coat dress with burgundy thigh-high boots and killer pink-trimmed shades. 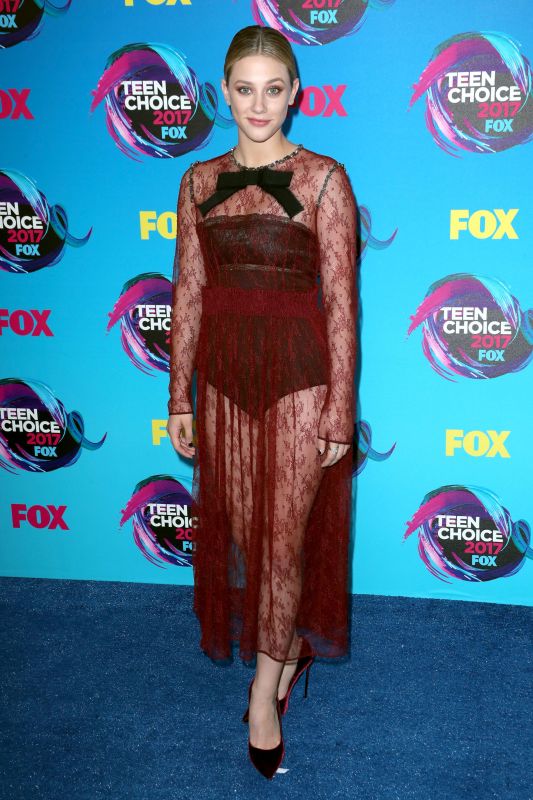 Megan Fox and Machine Gun Kelly have a date night in LA, plus more pics you have to see!

From Apple to X to Zuma, see whether you like what these Hollywood stars named their children

The stars weigh in