The world was stunned when Beyonce released the visual album "Lemonade" in February. She's been takin' a stand for the ladies — not just all the single ladies — since she got her start in the '90s with the girl group Destiny's Child, but her new stack of I'm-not-gonna-take-your-cheating tracks sent out seriously strong independent-woman vibes. We get that she ended up staying married to Jay Z, whom her music is rumored to be about. But hey, that's her prerogative — as was her decision to slay on stage during her Formation World Tour all year long as she brought her heartache-to-forgiveness journey to life.

No matter what political party you're affiliated with — Republican, Democrat, Independent, Libertarian, Green or in between — the fact that Hillary Clinton not only ran for president but was the first female candidate ever to earn a major party's nomination was a huge step for women across the globe. Despite widespread disappointment — the latest Nov. 8 election counts show that Hillary won the popular vote despite Donald Trump's electoral college victory — her contribution to shattering the glass ceiling can't be denied. Getting this much closer to electing the first female president in the history of the United States is girl power at it's finest. Not to mention that the 2016 Democratic National Convention was all about empowering ladies, featuring speeches from strong female celebrities like Demi Lovato, Eva Longoria and Meryl Streep. My oh my, how the world has evolved.

Jessica Alba's The Honest Company was valued at $1.7 billion

Jessica Alba already had a successful acting career when she decided to hone in on her entrepreneurial side four years ago by starting up a "green" line of baby products and cleaning supplies. As the founder and chief creative officer of The Honest Company, Jessica has spent countless hours growing the all-natural brand and her hard work has more than paid off. In 2016, she turned down a billion-dollar offer for her beauty baby, which makes sense considering that the company was recently valued at $1.7 billion. What says "female empowerment" more than a working mom of two building a billion-dollar empire from the ground up?!

Taylor Swift made history at the 2016 Grammys as the first woman to win Album of the Year twice. The "1989" artist took the opportunity to speak to "the young women out there" about keeping their heads up above the haters (a thinly veiled dig at Kanye West following their beef over his "Famous" track). "There are going to be people along the way who try to undercut your success or take credit for your accomplishments or your fame," she warned. "But if you just focus on the work and you don't let those people sidetrack you, someday when you get where you're going, you will look around and you will know it was you and the people who love you who put you there, and that will be the greatest feeling in the world." You tell 'em, Tay Tay. Wise words.

Sarah Paulson nailed her performance as attorney Marcia Clark on "The People v. O.J. Simpson: American Crime Story," so her 2016 Emmy win for Outstanding Lead Actress in a Limited Series or Movie was well-deserved. But we love that she took her few minutes on the winner's podium to talk about the woman she played rather than herself. She referred to Marcia, who was harshly criticized during the real O.J. trial back in 1995, as a "complicated, whip-smart, giant-hearted mother of two who woke up every day, put both feet on the floor and dedicated herself to righting an unconscionable wrong." Girl power is all about bringing other women up with you.

Lady Gaga encouraged women to speak up about sexual assault

In 2016, Lady Gaga shared her story of past sexual assault in hopes of encouraging other women to speak up and be brave. Her candid performance of the song "Til It Happens To You" at the Oscars struck a major chord. "Something I have kept a secret for so long that I was more ashamed of than anything became the thing the women in my life were the most proud of," she wrote on Instagram after hearing how proud her grandmother and aunt were of her for speaking up. "And not just any women, the ones I look up to the most." Women not only have to stick together, but support each other.

Knowledge is power, ladies! In May 2016, it was announced that Angelina Jolie would be a visiting professor at the London School of Economics. Not only is it amazing that she's adding a major line to her resume, but you'll never guess what subjects she's planning to lecture on there: women, peace and security. "I am very encouraged by the creation of this master's programme," the "By the Sea" actress said in a statement. "I hope other academic institutions will follow this example, as it is vital that we broaden the discussion on how to advance women's rights and end impunity for crimes that disproportionately affect women, such as sexual violence in conflict."

"Gilmore Girls" got a revival on Netflix

You can't spell "Gilmore Girls" without girl power! Well, technically you can, but you get the point, right? It's been more than nine years since the original show, starring Lauren Graham and Alexis Bledel, aired its finale. But the four-part revival hit Netflix on Nov. 25 and a lot of people could talk of nothing else over Thanksgiving weekend. A fresh heaping dose of mother-daughter duo Lorelai and Rory's shenanigans in the small town of Stars Hollow was a major moment for girls everywhere! Melissa McCarthy even came back as chef Sookie. But, we will never get over those last 4 words … unless, of course, they do another set of episodes so we can finally get real closure. Fingers crossed!

Women of all sizes have equal power! And a slew of models set out to prove it in 2016. In February, "plus size" model Ashley Graham made her debut as a Sports Illustrated swimsuit model — then landed a coveted Swimsuit Issue cover in May. That same month, size-14 model Iskra Lawrence took the Internet by storm when she decided to shine a light on the ridiculous "thigh gap" trend. "No thigh gap or thigh gap who cares," she captioned a side-by-side photo of herself on Instagram — one with her posing with a huge gap next to one featuring her legs touching, proving it's all in the presentation. Nice work, ladies!

Emma Watson celebrated International Women's Day on March 8 being as proactive as possible about actually making advancements for women. The United Nations' goodwill ambassador for women delivered a powerful speech at the HeForShe Arts Week launch, pushing gender equality as the new normal, and continued to speak about the subject at various events throughout the day. "It's an equality club, for both genders," the "Harry Potter" star told Greg James via the BBC. "It's about men coming in support of women and women coming in support of men." Watching a powerful female celebrity use her fame to make positive changes in the world is simply fabulous.

Michelle Obama made a song for her girls

This was First Lady of the United States Michelle Obama's last full year in the White House. She's sure done a lot to empower women during her eight-year run, but we especially love the recent single the mom of two dropped at the SXSW Festival for all of her girls! FLOTUS assembled female vocalists Kelly Clarkson, Kelly Rowland, Zendaya, Janelle Monae, Lea Michele, Missy Elliot, Chloe and Halle, and Jadagrace to put together the track "This Is For My Girls." The song was meant to help spread awareness and raise money for her Let Girls Learn initiative.

We just have so much girl-power love for the Final Five group of female gymnasts who won gold for the United States at the 2016 Olympics in Rio de Janiero. Youngsters Simone Biles, Gabby Douglas, Laurie Hernandez, Madison Kocian and Aly Raisman are the epitome of female empowerment. Hard work pays off! 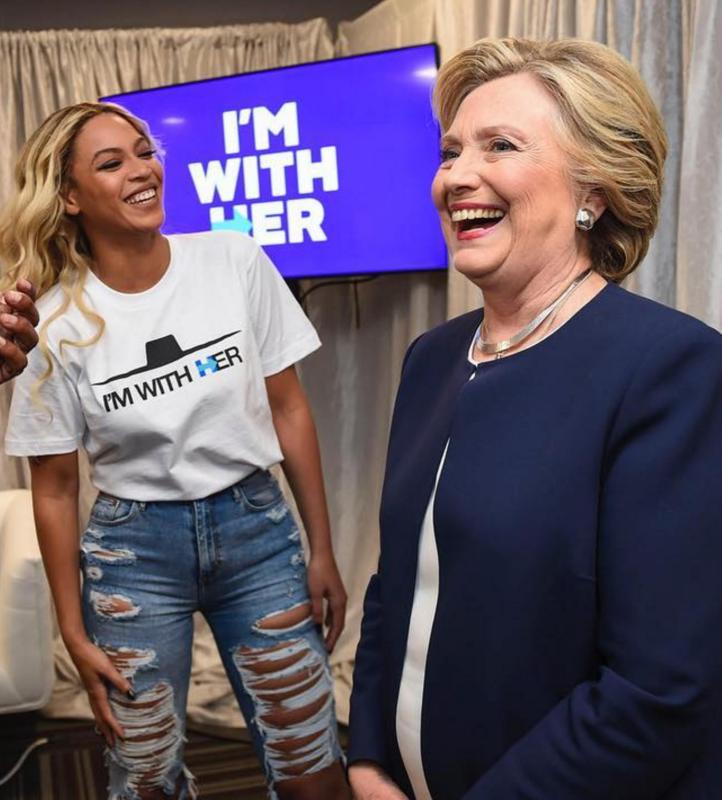 Up Next Girl Power!