Who doesn't love watching a wedding unfold on the big screen?! Inspired by new photos of Lady Gaga and Adam Driver filming their characters' wedding scene in Rome on April 8, 2021, for the Ridley Scott movie "House of Gucci," Wonderwall.com is rounding up some of the most memorable wedding dresses in movie history. Keep reading for more of the big screen's best wedding looks…

We'll never get enough of Carrie Bradshaw's couture creation! Fans will never forget that dreamy scene in 2008's "Sex and the City" in which Carrie (played by Sarah Jessica Parker) tries on couture wedding gowns for a Vogue photoshoot. She ended up going with this showstopper, a ballgown by Vivienne Westwood (though we were more partial to the Oscar de la Renta). Even though her wedding didn't go off as planned, at least she looked fabulous chasing after that limo.

A tea-length wedding gown? Audrey Hepburn pulled off this Givenchy dress in 1957's "Funny Face." The dress, with its fitted bodice and full, tea-length skirt, was a phenomenon, quickly becoming one of the most iconic dresses in film history (it also started a tea-length wedding-dress trend).

When it finally came time for Bella Swan to marry Edward Cullen in the fourth installment of "The Twilight Saga," 2011's "Breaking Dawn – Part 1," Kristen Stewart needed the perfect dress, so author Stephenie Meyer recruited designer Carolina Herrera. The result? This elegant, long-sleeved silk gown. Carolina told Vogue UK at the time, "In the initial fitting when Kristen put the dress on and looked in the mirror, she was very moved. In that moment she was not an actress or a character in a film — she was a bride, and a happy one at that. It is always very important to make the bride happy, of course, and in this case I was delighted to do so. It was a very special moment for both Kristen and the character of Bella to share." After the film's release, the dress was so wildly popular that it spawned a designer knockoff at David's Bridal that retailed for $799.

RELATED: Stars you forgot were in the "Twilight" franchise

"Marie Antoinette" saw Kirsten Dunst sporting dozens of stunning gowns when she played the titular royal back in 2006, but when it came time for Marie to wed the king of France, she donned this unforgettable heavily embellished ballgown designed by Milena Canonero. Those bows! That insanely over-the-top pannier! This one was truly fit for a queen.

Next up is Julie Andrews' ivory satin A-line wedding gown in 1965's "The Sound of Music." Julie's character, Maria, wears this stark white, high-necked, no-frills gown made of Shantung silk while walking down to aisle to wed Captain Von Trapp (Christopher Plummer). It was crafted by Oscar-winning costume designer Dorothy Jeakins and fetched more than $23,000 when it was sold at auction in 2013.

Want a peek at a futuristic wedding dress? Katniss Everdeen gave us a great example in 2013's "The Hunger Games: Catching Fire." In the film, Jennifer Lawrence's character sports this couture creation courtesy of resident designer Cinna (played by Lenny Kravitz), which featured an intricately embellished bodice and a dramatic tiered and ruffled skirt.

Two wedding dresses for the price of one! Kate Hudson and Anne Hathaway starred in 2009's "Bride Wars," a film about two former besties attempting to sabotage each other's weddings. It featured two very different takes on wedding gowns — with Anne's character, Emma, opting for an ivory off-the-shoulder mermaid silhouette and Kate's character, Liv, going for a stark white strapless ballgown with a sweetheart neckline.

One of the most memorable parts in "Crazy Rich Asians"? That insane wedding! The stunning dress worn by Araminta Lee (played by Sonoya Mizuno) was worthy of her walk down a river aisle. InStyle reported that the dress took three weeks to create and 30 people to embellish it with gold Swarovski crystals. And the most surprising part? It's technically not a wedding dress but a bodysuit with an attached skirt over top. Araminta went sans shoes to walk through that water, meaning all the attention stayed on her glimmering gown.

In 1991's "Father of the Bride," Kimberly Williams-Paisley — then just Kimberly Williams — played Annie Banks, the daughter of reluctant father-of-the-bride George Banks (Steve Martin). On the big day when her father finally had to give her away, Annie wore this wedding gown with a lace bodice and full skirt designed by Susan Becker.

The original 1950 "Father of the Bride" film featured Elizabeth Taylor in an unforgettable wedding gown. The legendary movie star played Kay, the daughter of Spencer Tracy's Stanley T. Banks, and in the pivotal wedding scene, she donned this high-necked lace-covered frock. It was designed by Helen Rose.

In "My Big Fat Greek Wedding," did you expect the gown to be understated? Of course it wasn't, and like everything else attached to the big day, it was over-the-top for Toula Portokalos! We're talking tons of bows, insanely-extra sleeves and even a choker! Nia Vardalos's character wore this Michael Clancy design in the 2002 film, and it was a perfect fit.

Vivien Leigh wore some phenomenal dresses in "Gone With the Wind" as Scarlett O'Hara, but this wedding dress stands apart from the rest. In the film, she has a rushed marriage to Charles Hamilton (played by Rand Brooks, right) and has to wear her mother's wedding gown — hence the imperfect fit. Walter Plunkett, who designed the gown for the 1939 film, actually fit it to Barbara O'Neill (second from left), who played Scarlett's mother, Ellen, to ensure it truly looked like a hand-me-down. Even the style details, like those massive sleeves and the heavy silk-satin skirt, were strategically taken from the era Ellen would have been married in, making the attention to detail on this gown even more impressive.

The '50s brought us some very unconventional wedding gowns on the silver screen! Legendary superstar Marilyn Monroe sported one of these unique dresses by Travilla — with its lace bell sleeves and tea-length tulle — in 1953's "Gentlemen Prefer Blondes."

2018's "Fifty Shades Freed" gave fans a look at the future Mrs. Anastasia Grey's wedding gown — a fitted, lace-covered, off-the-shoulder wedding dress with button detailing down the back. Monique Lhuillier, who was behind the sleek gown, told ELLE magazine at the time, "I wanted to make sure it was iconic and very memorable, because once it's in a film, it lives forever. So I wanted to create something traditional but with a modern twist, and really make sure it encompassed Anastasia's personality. I also wanted it to have the aesthetic of my collections, knowing the reason they came to me was showcasing my design aesthetic through the character."

Looking for wedding dress inspiration? Look no further than this unique floral nuptial gown donned by the glamorous Grace Kelly in 1956's "High Society." Like many other stunning dresses on this list, legendary costume designer Helen Rose created it (she also created Grace's real-life wedding dress!).

In order to bring a Southern bride to life, a lot of bows were needed. Thankfully, Shelby, played by Julia Roberts in 1989's "Steel Magnolias," had this sweet satin number with plenty of bow and floral embellishments — which she obviously accessorized with big hair on her big day.

We had to include a wedding gown fit for a Disney princess! In 2007's "Enchanted," Giselle (Amy Adams) finds herself transported to New York City while on her way to her fairy tale wedding. She ends up dumped in the middle of Times Square in this intricate, royally approved, puffy-sleeved wedding gown.

Gwyneth Paltrow donned this sweet, simple wedding dress in 1996's "Emma," based on the Jane Austen novel. We adored those short lace sleeves that were crafted by costume designer Ruth Myers.

It was a super-simple wedding outfit for Juliet in the 1996 revamp of "Romeo + Juliet." Claire Danes wore this sleeveless white silk number with a button detail all designed by Catherine Martin, with white gloves added for an extra dash of formal glamour.

2012's "The Vow" featured a very unconventional wedding — complete with an unorthodox wedding gown! Rachel McAdams' character, Paige, not only married beau Leo (Channing Tatum) in a museum — illegally, we might add! — but she also donned this short and sweet pink Betsey Johnson design for the nuptials.

Uma Thurman was a pregnant bride in "Kill Bill – Volume 2" in 2003. This more casual, three-quarter-sleeve frock was the perfect choice for her special moment, though things turned dark shortly after when a massacre began.

Lucille Ball donned this pretty lace wedding gown on camera in "The Long, Long Trailer." The actress played Tacy Bolton-Collini in the 1953 comedy in which she starred opposite — who else? — hubby Desi Arnaz. This gorgeous gown was crafted by legendary costume designer Helen Rose.

Talia Shire donned this A-line long-sleeved gown when she played Connie Corleone, Don Vito's daughter. The dress, paired with a lengthy veil, was certainly a stunner during her wedding scene in "The Godfather."

Drew Barrymore's character in "Ever After," Danielle De Barbarac, donned this stunning frock designed by costumer Jane Law in the romantic drama inspired by "Cinderella." The handmade gown was so elegant, it even earned its own name — the "Breathe" dress.

You might be surprised to see "Frankenstein" on the list, but the 1931 film included a stunning wedding dress designed by Vera West and worn by Mae Clarke. 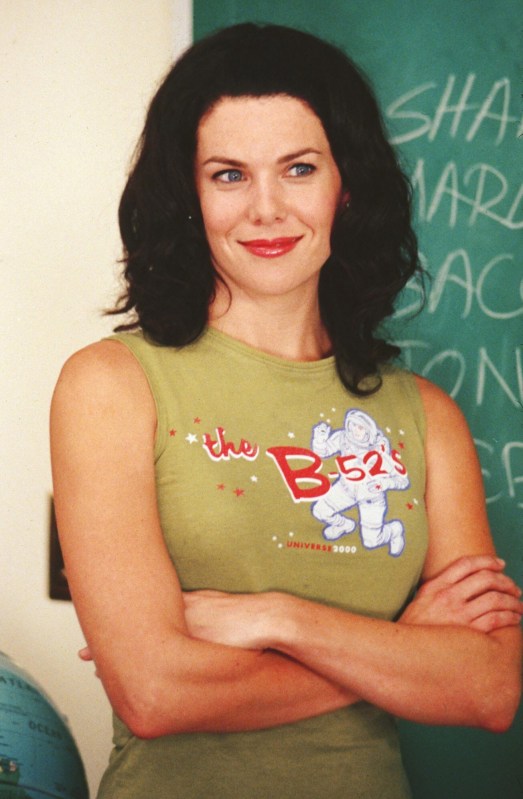 Up Next Moms Know Best