It was a time filled with big shoulder pads and even bigger hair! Join Wonderwall.com as we take a look at what some of our favorite pop stars of the '80s looked like when they first hit the music scene… starting with Janet Jackson! She made her debut as the youngest member of the famous Jackson family of singers on the television series "The Jacksons" in 1976, and in 1982, Janet released her self-titled debut solo album. Her third and fourth albums, 1986's "Control" and 1989's "Janet Jackson's Rhythm Nation 1814," launched her to full-fledged pop stardom. Not only was super-talented — Janet looked adorable with her voluminous curls!

Madonna, who's now known as the Queen of Pop, made quite the splash when she broke through in the early '80s. After initially performing as a member of the rock bands Breakfast Club and Emmy, she reached new levels of fame when she launched a solo career. In 1983, she released her debut self-titled album followed by 1984's "Like a Virgin" and 1986's "True Blue." As far as her signature look? Even early in her career, Madonna was never one to play it safe sartorially!

RELATED: See 32 rockers when they were young

Whitney Houston, who's recognized as one of the bestselling artists of all time, released her self-titled debut album in 1985, and it was met with immense commercial and critical success (it earned four Grammy nods including album of the year). Her second album released that decade, 1987's "Whitney" — which contained the hit single "I Wanna Dance with Somebody (Who Loves Me)" and led to her second Grammy nomination for album of the year — went on to become one of the bestselling albums of all time.

RELATED: What older singers looked like at the start of their careers

Before launching his successful solo career, Phil Collins was part of the acclaimed rock band Genesis, which formed in 1967. In 1981, the singer-drummer released his debut solo album, "Face Value," which included singles "In the Air Tonight," "I Missed Again" and "If Leaving Me Is Easy."

Although Paula Abdul first made a name for herself as a choreographer for the Los Angeles Lakers' Laker Girls, she became a household name after breaking into the music industry. In 1988, the beauty released her debut studio album, "Forever Your Girl," which went on to be certified seven-times platinum by the RIAA.

In 1983, Cyndi Lauper made history when her debut album, "She's So Unusual," became the first by a female artist to earn four top-five singles on the Billboard Hot 100 chart. Two years later, the eclectic Brooklyn native took home the honor for best new artist at the 27th Annual Grammy Awards. Her second album, "True Colors," which spawned a No. 1 single of the same name, was released in 1986.

Elton John, who's seen here in the '60s, began his career as a member of the band Bluesology before becoming a huge solo star in the decades that followed, including the '80s. His self-titled second studio album, which contained the single "Your Song," debuted in 1970 and earned a Grammy nomination for album of the year.

In 1985, Gloria Estefan — along with her band, Miami Sound Machine (which included husband Emilio Estefan, left — they're seen here in London in 1984) — released the single "Conga," which was their first major hit. Just before the end of the decade, the singer-songwriter, who hails from Havana, Cuba, had released her debut solo album, "Cuts Both Ways."

In 1981, George Michael formed the iconic pop duo Wham! with Andrew Ridgeley. They released three albums — 1983's "Fantastic," 1984's "Make It Big" and 1986's "Music from the Edge of Heaven" — and were best known for hit songs like "Wake Me Up Before You Go-Go," "Everything She Wants" and "Careless Whisper." In 1987, George — who was known for his playful fashion sense — released his debut solo album, "Faith."

Lionel Richie favorited flashy stage looks during his days as an ultra-famous singer in the '80s. After leaving The Commodores, Lionel in 1982 released his debut self-titled solo album, which spawned popular singles like "Truly," "You Are" and "My Love." He went on to release two more albums during the decade: "Can't Slow Down" and "Dancing on the Ceiling."

An icon! From 1960 to 1976, Tina Turner (seen here in the '60s) comprised one-half of the husband-wife musical duo Ike & Tina Turner. However, the '80s marked a pivotal point in Tina's already illustrious career. That's when she made her comeback! In 1984, she released her critically acclaimed fifth solo studio album, "Private Dancer," on which the Grammy-winning hit "What's Love Got to Do with It" appeared.

Culture Club singer Boy George reached the peak of his fame in the 1980s. During the decade, the band released notable singles "Time (Clock of the Heart)," "Do You Really Want to Hurt Me" and "Karma Chameleon." As for George's first solo album? That would be "Sold," which was released in 1987.

Diana Ross (seen here in 1968) rose to fame in the '60s as the lead singer of The Supremes, one of the top-selling girl groups in history. After leaving the beloved Motown group in 1970, she released a self-titled debut solo album the same year. Throughout the '80s, she released an impressive eight studio albums including 1980's "Diana," 1985's "Eaten Alive" and 1987's "Red Hot Rhythm & Blues."

Kylie Minogue — who is seen here looking totally on-trend by today's standards even though this photo is from 1988 — stepped onto the music scene with the release of her album "Kylie" the same year. Her second studio album, "Enjoy Yourself," came out a year later in 1989. Prior to her music career? The Australian beauty was an actress who appeared on the popular Australian soap opera "Neighbours" as a teen from 1986 to 1988.

Kate Bush — who's long been praised for her ethereal aesthetics — released her debut studio album, "The Kick Inside," in 1978. Four of her albums, including "Never for Ever" and "The Sensual World," debuted during the 1980s. 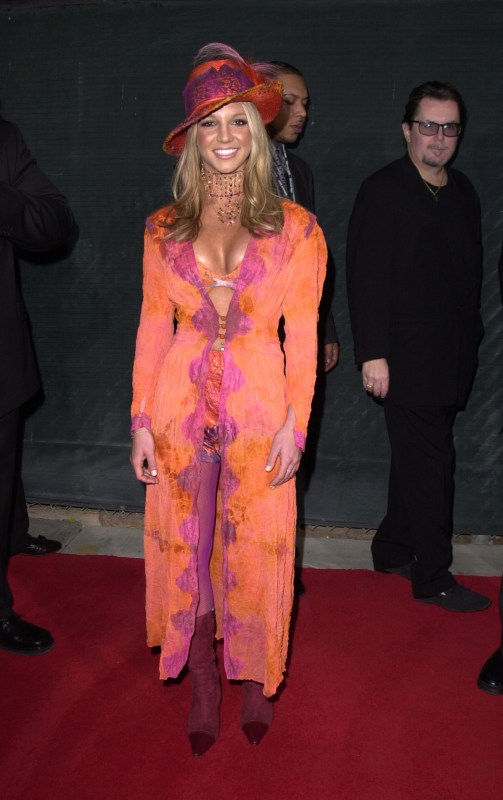 Up Next Britney's fashion flashback