TV audiences have long been fascinated by the woes of the wealthy. From their lavish homes to their scandalous secrets, shows about the rich and fabulous are one of our favorite obsessions. Join Wonderwall.com as we take a look at some of TV's most notorious affluent families… starting with the Crawley clan from the Golden Globe Award-winning series "Downton Abbey." Set in the early 1900s, the PBS show — which stars Maggie Smith, Hugh Bonneville, Laura Carmichael, Michelle Dockery and more — follows the English aristocrats as they deal with high society, scheming servants and rival heirs. Although the series ended in 2015, a lushly costumed film based on the show topped the box office the week it debuted in theaters in 2019. Keep reading to see more dirty-rich TV families…

The Emmy-nominated HBO original series "Succession" introduced us to the cunning savagery of the Roy family, owners of the world's largest international entertainment conglomerate. Though the business is run by their aging father, the four Roy children separately plot the company's future and who will take over as heir apparent. The series, which stars Matthew Macfadyen, Hiam Abbass, Alan Ruck, J. Smith-Cameron and Brian Cox, is believed to be inspired by the career and family of real-life media tycoon Rupert Murdoch.

Although based entirely on the life of Britain's Queen Elizabeth II and her family, the Golden Globe-winning Netflix original series "The Crown" is, by definition, fiction. Through the series — which returned for Season 3 on Nov. 17, 2019 — audiences have not only learned about historical events in the British royal family's lives but have seen the opulence and grandeur of palace life. Since its debut, two different actresses have played Britain's monarch during different stages of her life: Emmy winner Claire Foy (seen here) and Oscar winner Olivia Colman.

RELATED: Who's in line for the British throne?

What makes the Golden Globe Award-winning Amazon Prime original series "The Marvelous Mrs. Maisel" so, well, marvelous is the contrast between the show's star Miriam "Midge" Maisel (played by Rachel Brosnahan, left) and her well-to-do family, the Weissmans, as they battle over Midge's burning desire to join the ranks of successful stand-up comics in the 1950s. Tony Shalhoub and Marin Hinkle (right) star as Midge's loving albeit elitist parents who are firmly entrenched in their posh and pristine lives, creating endless opportunities for humor as their newly single daughter challenges the status quo. Thankfully, Season 3 is right around the corner, debuting on Dec. 6, 2019.

After six dramatic seasons, "Empire" starring Taraji P. Henson and Terrence Howard is sadly coming to an end in 2020. Throughout the series, fans have been mesmerized by the brutal betrayals, manipulations and powerful emotions that guide the uber-wealthy Lyon family as they fight for control of their dying father's music label, Empire Records.

We can't talk about wealthy TV families without mentioning the Sheffields from the hilarious '90s sitcom "The Nanny." The series starred Fran Drescher as a nasal-voiced New Yorker who winds up becoming the nanny for a motherless upper class Manhattan family. Sound familiar? It's basically the premise of "The Sound of Music," minus Julie Andrews, and, well, the music.

While we're not exactly sure how much money any of the families have on HBO's Emmy-winning series "Big Little Lies," we do know — for most of them — it's a lot. The series starring Nicole Kidman, Reese Witherspoon, Shailene Woodley, Zoe Kravitz and Laura Dern is an exciting exploration of the power that secrets and lies hold over the families of one upper class Monterey, California, circle of friends — and accomplices.

Who can forget the series that launched the career of Will Smith? "The Fresh Prince of Bel-Air" debuted in 1990, three years after Will, then part of the rap duo DJ Jazzy Jeff and the Fresh Prince, released debut album "Rock the House." For six years, audiences got to laugh at the culture clash between a struggling street kid from Philly who's sent to live with the Banks family — his mom's rich relatives in the wealthy Los Angeles enclave of Bel Air — who've lived a far different life from his.

Remember the Strattons on the 1980s sitcom "Silver Spoons"? The series featured a young-at-heart millionaire named Edward Stratton III (Joel Higgins, back center) who discovers he's the father of a boy named Ricky (Ricky Schroder, right) who, at a young age, is far more mature than his dad. Suddenly living in the lap of luxury, Ricky must navigate adolescence and his dad's emotional growing pains.

They might have been exquisitely evil, but the Lannisters of "Game of Thrones" were also decadently rich. This power-hungry family, including patriarch Tywin Lannister, his twins Jaime (Nikolaj Coster-Waldau) and Cersei (Lena Headey) and black sheep son Tyrion, as well as grandson King Joffrey — who happened to be the product of incest — made life in the Seven Kingdoms of Westeros a literal living hell for for just about everyone. As bad as they were, at least — according to Tyrion — a Lannister always pays their debts.

Fans of the CW superhero series "Arrow" know no family's richer in Star City than the Queens. The series follows billionaire brat Oliver Queen (Stephen Amell), who disappeared after going out on the family yacht with his father, only to return five years later as a highly trained, lethal archer who moonlights as a superhero. In his off hours, he also leads the family business, Queen Consolidated.

In the late '70s and early '80s, one family we all wanted to join was the Drummonds. Headed by aging father Philip Drummond (Conrad Bain), the family included eldest daughter Kimberly (Dana Plato) and two orphaned boys, Willis Jackson-Drummond (Todd Bridges, left) and his little brother, Arnold Jackson-Drummond (Gary Coleman). The boys were adopted by Philip following the death of their mother, their new dad's former housekeeper, and suddenly find themselves enjoying the lap of luxury — a far different existence than their previous life.

While we'll plead the fifth on how Tony Soprano (James Gandolfini) made his money, there was clearly no shortage of the stuff on "The Sopranos." The series, which ran on HBO from 1999 to 2007, featured the exploits of this dangerous New Jersey crime family as well as Tony's interesting journey toward reclaiming his mental health.

Technically, the Bluth family of "Arrested Development" used to be super-rich, but their hilarious journey toward learning how to make ends meet following their father's arrest made it impossible to leave them off our list. Following the imprisonment of their real estate mogul dad, widowed son Michael (Jason Bateman) tries to keep his struggling family together as they grapple with the reality of being broke for the first time in their lives. Season 5 of the popular series starring the original cast aired on Netflix in 2019.

Jason Bateman also happens to play another wealthy TV character on Netflix. In the crime-thriller series "Ozark" — which Jason also directs and produces — he stars as Marty Byrd, a financial adviser forced to become a money launderer for a menacing drug lord. He and his family suddenly find themselves in possession of $500 million in dirty cash that they have to "wash," turning it into clean money without anyone in their small Missouri town noticing.

From the billionaire Bass family to the well-connected Vanderbilts, the enticing drama series "Gossip Girl" featured no shortage of wealthy families on New York's Upper East Side. The show, which starred Penn Badgley, Ed Westwick, Taylor Momsen, Blake Lively, Chace Crawford and Leighton Meester, revolved around a group of high society frenemies whose secrets were exposed by an anonymous blogger who seemed to know way too much about their private lives.

Wealth knows no bounds on the Showtime original series "Billions" starring Damian Lewis as Bobby Axelrod and Malin Akerman as his wife, Lara. The couple is beyond rich thanks to Bobby's creative business practices, which caught the eye of a justice-hungry prosecutor looking to sniff out financial corruption on Wall Street.

Who's richer, the Carringtons or the Colbys? On the reboot of the classic '80s drama "Dynasty," which stars Grant Show, Nathalie Kelley and Elizabeth Gillies, these two excessively wealthy rival families duke it out for control over their vast fortunes. The series originally aired in 1981 and remained a staple primetime series until 1989. Thankfully, The CW brought the tantalizing drama back with a brand-new cast to play our favorite devious characters.

If any dirty-rich TV family captivated us more, it was the Ewings of the primetime drama "Dallas," which aired from 1978 to 1991. The series starred Larry Hagman (center right) as J.R. Ewing — the ruthless head of his family's multimillion-dollar oil company — in a story about greed, lust, power and deception between family members. In 2012, the series was briefly rebooted with a new cast, though canceled just two seasons later.

Between the Cohens and their neighbors the Coopers, the families on "The O.C." gave audiences plenty of opportunities to explore what Orange County rich looks like. Starring Adam Brody, Rachel Bilson, Ben McKenzie, Mischa Barton, Peter Gallagher, Kelly Rowan, Alan Dale, Tate Donovan and Melinda Clarke, the series followed teen Ryan Atwood (Ben) as he adjusted to his new life in the ultra-wealthy O.C. amidst friends who've grown up with every privilege imaginable.

It might have only lasted two seasons, but there was nothing we didn't love about the status-hungry Von Webbers on "Odd Mom Out." The show, one of the first scripted series to air on reality TV giant Bravo, starred Jill Kargman as a Jill Weber — a fictionalized version of herself — as she struggled to find her footing amidst the posh and perfect moms of New York's Upper East Side while also dealing with her wealthy and totally snobby in-laws.

It only lasted for one season, but the ABC crime-mystery drama "Grand Hotel" featuring the wealthy Miami-based Mendoza family was a juicy take on living lavishly. The series starred Demián Bichir and Roselyn Sánchez as hoteliers Santiago and Gigi Mendoza who, along with their family, were hiding rich secrets that rivaled their net worth. Sadly, the series — which was produced by Eva Longoria — didn't catch on with audiences and was canceled in 2019.

Who can forget the Darlings, New York's richest family from the ABC series "Dirty Sexy Money"? Starring Donald Sutherland as Patrick "Trip" Darling III and Jilly Clayburgh as his wife, Tish, the series followed their personal lawyer, Nick George, as he tried to navigate the Darlings' questionable moral compasses while trying to solve his father's mysterious murder. Although it was nominated for a Golden Globe, the series was ultimately canceled in 2009 after just two seasons.

The Graysons were the Hamptons family we loved to hate on the ABC drama-mystery series "Revenge." The show starred Madeleine Stowe as Victoria, the wealthy matriarch of the Grayson family and Emily VanCamp as Amanda Clarke, who went by the alias Emily Thorne — a young woman determined to bring down the Graysons in retribution for their role in the betrayal and murder of her father. The Golden Globe-nominated series ran for four seasons before ending in 2015.

The Clampetts might have been nouveau riche, but that didn't stop us from loving them or laughing at their journey to affluence on the comedy series "The Beverly Hillbillies." The series, which aired from 1962 to 1971, followed the suddenly wealthy Clampett clan as they went from struggling Missouri farm folk to mansion-dwelling Californians — much to the shock of their neighbors — after discovering oil on their land. 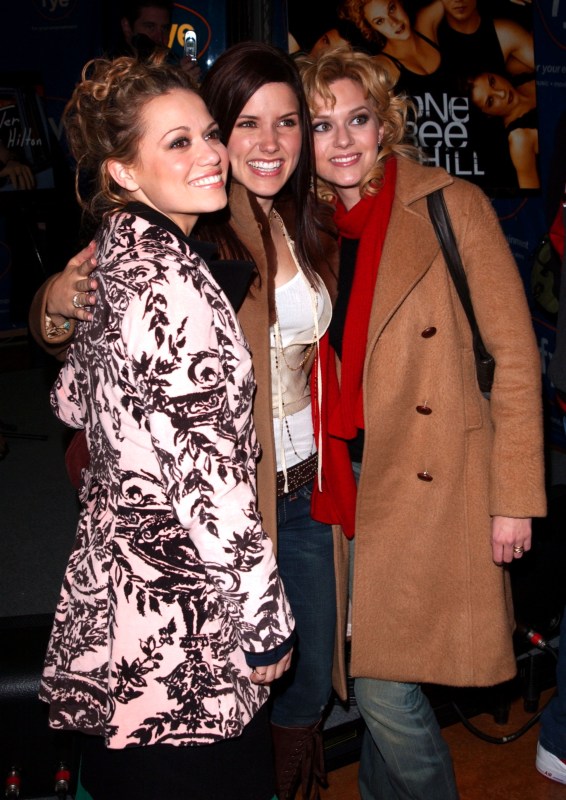