Music legend Whitney Houston had a wardrobe almost as big and bold as her epic voice. She loved bright colors, sequins, sparkles and luxe furs. The "I Will Always Love You" singer tragically passed away from a drug-related accidental drowning on Feb. 11, 2012, at the age of 48. Now, five years later, we're flashing back to 15 of her most iconic looks from the beginning of her career in the late '80s onward… starting with this mustard yellow velvet crop top and light-wash jeans she wore with a colorful jacket encrusted with an array of gemstones for an appearance on the "Des O'Connor Show" in 1990. Keep reading for more glamorous Whitney…

RELATED: Best New Artist Grammy winners: Where are they now?

For the 1986 Grammys, Whitney Houston donned this bright turquoise gown jazzed up with a bedazzled shoulder strap. Tres chic!

Whitney Houston was impossible to miss on stage at New York City's Madison Square Garden on Sept. 8, 1987, thanks to her bright yellow tiered miniskirt with a rainbow-colored bejeweled corset and matching blazer. It's safe to say that she was shining bright like a diamond before Rihanna was even born!

Whitney Houston went for more than one pop of color in this rainbow striped suit-dress for the 1988 American Music Awards. Good thing the actual award was clear or there could have been a major clash.

Whitney Houston's outfits got more and more spectacular every year. She wore a fully bejeweled patterned rainbow bodysuit for a performance in London on Sept. 1, 1991. Imagine anyone else trying to pull that off…

Nowadays, we often see stars like Jennifer Lopez and Kylie Jenner showing off their curves in body-hugging jumpsuits, but Whitney Houston was rocking a skin-tight full-length bodysuit long before anyone else. She looked fierce in a red-hot number at the 1993 Billboard Music Awards. Staying true to her signature style, the whole ensemble was embroidered with sequins and fringe.

Pretty in pink! Whitney Houston dressed in head-to-toe bubblegum pink for the 2000 Grammys. And she made sure to include her favorite fashion elements — sequins on the bodice and a fur stole.

Whitney Houston went through a matching phase with her then-husband Bobby Brown where she enjoyed coordinating colors with her man for concerts and red carpets. She decided to get their late daughter Bobbi Kristina Brown in on the fun too, dressing everyone in white for the 1998 Art Awards. Whitney put her special touch on the look with a fur-trimmed coat.

Whitney Houston sexed it up for the 1999 Soul Train Music Awards in a super-short studded minidress. She looked even more sultry with an added choker and sleek bob haircut.

Fur, fur, fur in every color! Whitney Houston made her black gown pop with a luxe two-tone purple and pink fur wrap while on the arm of Bobby Brown for the 2001 Vanity Fair Oscar party.

Whitney Houston got all dressed up every year for her pal Clive Davis' annual pre-Grammy party. In 2007, she looked glamorous in a beige gown encrusted with crystals down the front. She added a fur-lined shawl to finish off her signature look.

Whitney Houston actually kept it simple for the 2009 American Music Awards. Still, her one-sleeved draped white gown was just as memorable as any of her sparkling outfits. The "Run To You" singer embodied elegance in every way.

Whitney Houston quickly went back to her love for sparkles and fur. She wore a silver metallic dress with a lush teal fur coat for a performance in Moscow on Dec. 9, 2010.

In one of her last iconic ensembles, Whitney Houston coordinated with her late daughter Bobbi Kristina Brown in sparkling all-black for the 2011 Clive Davis Pre-Grammy party in Beverly Hills. But she obviously couldn't step out with a bit of shine. In true Whitney fashion, her mock-turtleneck minidress was covered in shimmering sequins. 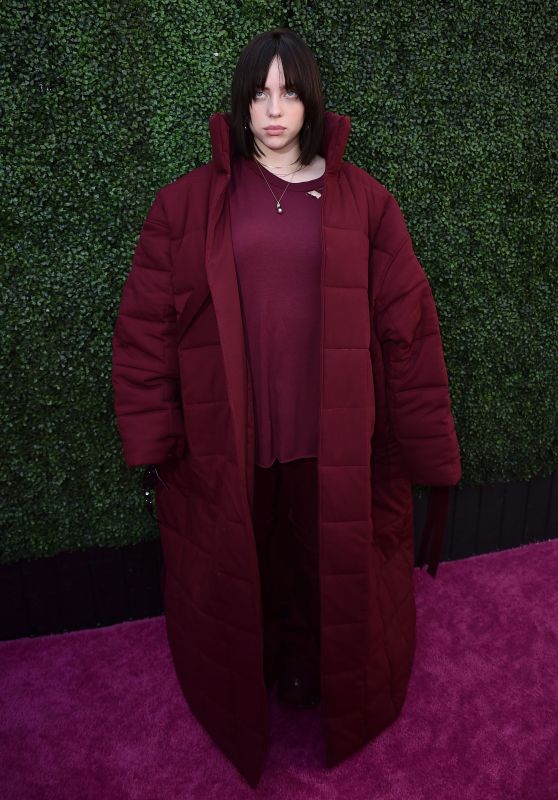 Up Next Billie's best