The Grammys are almost here! But before the awards are handed out on Jan. 26, 2020, Wonderwall.com is introducing you to the nominees' significant others… starting with this British musician's actress love… James Blake's girlfriend is another famous face: The best alternative music album nominee (for "Assume Form") has been with actress Jameela Jamil since 2015. Keep reading to meet more 2020 Grammy nominees' other halves…

RELATED: Stars at their first Grammys

Best country album nominee Thomas Rhett (for "Center Point Road") has one of the cutest relationships in country music. He met wife Lauren Akins in second grade and married her in 2012. Now they're the proud parents of two daughters with a third due in early 2020!

RELATED: Most buzzed-about moments of Grammys past

Lana Del Rey made things Instagram official with boyfriend Sean "Sticks" Larkin in December 2019. He's a police officer from Tulsa, Oklahoma, who stars on "Live PD." The two were first romantically linked in September after they were spotted together on a walk in New York City's Central Park. Lana is up for album of the year and song of the year (for "Norman F—ing Rockwell!" and its title track) at this year's Grammys.

RELATED: Most memorable fashion moments of Grammys past

Vampire Weekend's Ezra Koenig has kept his personal life pretty private, but he's been linked to a fellow famous face since 2014 — Rashida Jones. The musician and the actress welcomed a son together in 2018. This year, his band is nominated for album of the year and best alternative music album for "Father of the Bride."

Sara Bareilles is up for a Grammy for best American roots performance for "Saint Honesty." We bet she brings along boyfriend Joe Tippett, an actor she's been seeing since 2015.

Ariel Rechtshaid, who's up for an album of the year Grammy for producing Vampire Weekend's album "Father of the Bride," has been linked to a fellow musician since August 2017 — HAIM's Danielle Haim. (He produced her group's first album too.)

2020 will be an exciting year for Maren Morris! She's up for a Grammy for best country duo/group performance for "Common" with Brandi Carlile and she'll be welcoming her first child, a son, with fellow country music singer-songwriter Ryan Hurd, whom she met in 2013 and married in 2018.

Shawn Mendes and Camila Cabello have been a couple since July 2019. They made things official the month after releasing their single "Senorita." They could make the Grammys a date night as their tune is up for best pop duo/group performance.

Brittany Howard is a married woman! She wed Jesse Lafser, a fellow musician, in 2018. The singer and Alabama Shakes frontwoman is up for best rock performance and best rock Song for her solo debut, "History Repeats."

Gary Clark Jr. married Australian model Nicole Trunfio in 2016. They share two children and are expecting a third in early 2020. The Texas-born blues, rock and soul musician is up for best rock performance, best rock song, best contemporary blues album and best music video for his album "This Land" and its title track.

Thom Yorke is up for four Grammys — best alternative music album, best music film and best boxed or special limited edition package (all for "Anima") and best song written for visual media (for "Suspirium"). If the Radiohead frontman attends the show, we bet girlfriend Dajana Roncione, an Italian actress, will be by his side.

The Dan in Dan + Shay, Dan Smyers, is a married man. He wed longtime love Abby Law in 2017. Now he's up for two Grammys — best country duo/group performance and best country song, both for "Speechless."

Shay Mooney of Dan + Shay is also off the market! The other half of the wildly successful country duo wed Hannah Billingsley, a former Miss Arkansas, in 2017. The two welcomed their first child, son Asher James, earlier that same year, and are currently expecting their second child. Dan + Shay are up for best country duo/group performance and best country song, both for "Speechless."

Willie Nelson has been married to his fourth wife, Annie D'Angelo, since 1991. The couple don't make public appearances often, but here's hoping Annie tags along to the Grammys where Willie's up for best country solo performance for "Ride Me Back Home."

Luis Fonsi has a built-in Grammys date — wife Agueda Lopez! The couple have been married since 2014 and share two children together. We'll see if Luis takes home the top honor in the best Latin pop album category (for "Vida") at this year's ceremony.

Eric Church met future wife Katherine Blasingame at work: She was a music publisher! The couple wed in 2008 and have since welcomed two sons. Now the country crooner is up for two Grammys in 2020 — best country song (for "Some of It") and best country album (for "Desperate Man").

This one's no surprise! John Legend is half of one of Hollywood's favorite couples. He's been with model and cookbook author Chrissy Teigen since meeting her on one of his video shoots in 2006. They wed in 2013 and now are parents to two kids. Hopefully, the couple will make a date night out of the Grammys, where John is up for best traditional pop vocal album for "A Legendary Christmas" and best rap/sung performance for "Higher."

Blake Shelton is nominated for best country solo performance for "God's Country," so we're hoping he and his famous other half make an appearance on the Grammys red carpet together! He's been dating fellow singer and "The Voice" coach Gwen Stefani since 2015.

Taylor Swift has been dating British actor Joe Alwyn since 2016. The pop superstar keeps their relationship as private as possible, but we're still hoping Joe might join her at the Grammys this year, where she's up for three awards for her album "Lover," her song "Lover" and the single "You Need to Calm Down."

Country music star Tyler Childers, who's up for best country solo performance for "All Your'n," is married to fellow musician Senora May .

Michael Buble has been happily married to Argentine actress Luisana Lopilato, with whom he has three kids, since 2011. We bet Luisiana will be by his side at the 2020 Grammys, where Michael is up for best traditional pop vocal album for "Love (Deluxe Edition)."

Beyonce has been in a relationship with fellow superstar JAY-Z since 2002! The power couple have been married since 2008 and are now parents of three. We bet the rapper and mogul will be cheering his wife on at the 2020 Grammys, where she's up for four awardsL best pop solo performance and best song written for visual media (for "Spirit"), best pop vocal album ( for "The Lion King: The Gift") and best music film (for "Homecoming").

The Jonas Brothers are up for best pop duo/group performance for their hit song "Sucker," and they're all suckers for their respective wives. The youngest in the group, Nick Jonas, started dating actress Priyanka Chopra in May 2018 and married her six months later.

Joe Jonas has been with actress Sophie Turner since 2016. And they're so in love they married not once but twice — first in Las Vegas in May 2019 and again in Sarrians, France, in June. We bet Sophie will be Joe's plus one at the Grammys, where the Jonas Brothers are up for best pop duo/group performance for "Sucker."

The eldest member of the Jonas brothers, Kevin Jonas, has been off the market for quite some time. The singer, who's up for best pop duo/group performance for "Sucker" along with his brothers, met Danielle Deleasa in 2007 and married her in 2009. The happy couple now share two daughters.

Andrea Bocelli married his second wife, Veronica Berti, in 2014 after welcoming a daughter in 2012. He's up for best traditional pop vocal album for "Sì" this year.

Ed Sheeran picked up one Grammy nomination in 2020 (for best pop vocal album for "No.6 Collaborations Project"). He wed an old schoolmate, Cherry Seaborn, in late 2018.

Barbra Streisand is up for best traditional pop vocal album for "Walls" this year. We bet her husband, actor James Brolin, will be cheering her on. The two have been married since 1998.

Offset and Cardi B are rap's latest supercouple. They've been married since 2017 and welcomed a daughter together in 2018. This year, they're both up for best rap performance for the Migos member's solo song "Clout," on which Cardi features.

DJ Khaled is married to Nicole Tuck, the mother of his son, Asahd, with whom he's expecting baby No. 2. The producer-performer is up for best rap/sung performance for his song "Higher."

Brothers Osborne are up for best country duo/group performance for "I Don't Remember Me (Before You)." One half of the duo, John Osborne, has been married to songwriter Lucie Silvas since 2015.

Little Big Town's Grammy nomination for best country duo/group performance for their song "The Daughters" is a family affair for two members! Yep, Karen Fairchild and Jimi Westbrook are married! The bandmates wed in 2006 and have one son together.

Another member of Little Big Town married in 2006: Kimberly Schlapman wed Stephen Schlapman and now they share two daughters. We bet he'll be on her arm at the Grammys, where her group is up for best country duo/group performance for their song "The Daughters."

All the members of Little Big Town — who are nominated for best country duo/group performance for their song "The Daughters" — are spoken for. Phillip Sweet wed Rebecca Arthur back in 2007. The couple share a daughter.

In the summer of 2019, Ariana Grande was romantically linked to a fellow artist — Mikey Foster from the duo Social House. The two, who weren't exclusive, collaborated on her single "Boyfriend," which is up for a best pop duo/group performance Grammy. Ariana is also up for record of the year and best pop solo performance (for "7 Rings") and album of the year and best pop vocal album (for "thank u, next"). 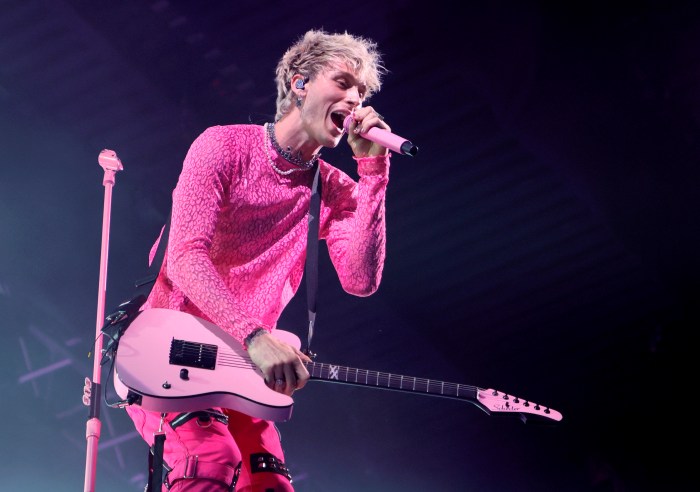