The Met Gala might be fashion's biggest night, but that doesn't mean every star's look is a win. In fact, some of Hollywood's biggest names have experienced major style slip-ups at the annual A-list affair. Ahead of the 2021 Met Gala on Sept. 13, Wonderwall.com is looking back at the most buzz-worthy looks of galas past, starting with Rihanna's divisive Guo Pei confection from 2015. The fur-trimmed off-the-shoulder robe featured a massive filigree-embroidered train that spawned countless memes and drew comparisons to everything from Big Bird to an omelet to pizza.

RELATED: The best accessories from Met Galas past

In 2019, Jared Leto nailed the "Camp: Notes on Fashion" theme. He took a page from the Gucci runway and walked the pink carpet wearing a high-necked red gown bedazzled with jewels — while holding a replica of his own head.

RELATED: All the celebrity Met Gala chairpersons over the years

All eyes — and jokes! — were directed at pregnant Kim Kardashian during the 2013 Met Gala. To celebrate the "PUNK: Chaos to Couture"-themed event, Kanye West's then-love donned a Givenchy gown that drew comparisons to granny's curtains, a floral couch, Homer Simpson's muumuu and even "Mrs. Doubtfire."

The 2019 Met Gala theme, "Camp: Notes on Fashion," resulted in some pretty crazy interpretations — like this one from Elle Fanning. The actress embraced the over-the-top order in a Miu Miu getup plucked straight from the '70s — a coral two-piece outfit with winged sleeves and bell bottoms, excessive necklaces and some seriously dramatic nail art.

Solange Knowles both awed and confused fashion followers at the 2015 Met Gala with this one! The singer and performance artist selected one of the most memorable looks of the night — a Giles creation — that featured an out-of-this-world graphic print on its circular silhouette.

Katy Perry had the perfect occasion to turn herself into a real angel — the 2018 Met Gala's "Heavenly Bodies: Fashion and the Catholic Imagination"-themed event. The pop star transformed into a heavenly spirit with the help of Versace, which made her a gold minidress with an antique bronze netted overlay studded with Swarovski crystals. But it wasn't her dress that had everyone talking — it was that insanely detailed larger-than-life set of wings that the fashion house created for her out of real feathers.

Let's just say the view from behind Madonna's 2016 Met Gala gown isn't exactly safe to show you. The front wasn't much better considering how sheer the black lace ensemble appeared. The strangest element? The way Madonna wrapped her arms and thighs in KT tape, which is typically used for sports injuries. You can blame Givenchy's Riccardo Tisci for this one.

Sarah Jessica Parker certainly made a statement in tartan and tulle at the 2006 Met Gala. The theme that year was "AngloMania: Tradition and Transgression in British Fashion," so the star donned a one-shouldered Alexander McQueen design featuring a fun twist with its bold mix of plaid and lace — a perfect sartorial selection that night.

At first glance, Jaden Smith's 2017 Met Gala getup wasn't particularly notable — an all-black Louis Vuitton ensemble comprised of a trench coat, skinny trousers and heeled boots. But after taking a closer look at what he clutched in his hand, it's safe to say that Jaden takes the cake for carrying one of the strangest accessories of all time! Yup, that's his old hair, which he'd recently chopped off for an acting role.

Jessica Alba really set the bar low during the 2009 Met Gala. The actress may have looked lovely, but she also looked like she put minimal effort into what's meant to be fashion's biggest night. A strapless cocktail dress with black tights? That would barely even cut it for an everyday red carpet event.

One of the most gorgeous gold gowns of all time? Cate Blanchett's 2007 Met Gala look. The Balenciaga dress with opulent fringe down the fitted silhouette was a response to that year's "Poiret: King of Fashion" theme.

Katy Perry literally glowed during the 2010 Met Gala! The pop superstar rocked an LED rope-lit gown by Cute Circuit that aligned perfectly with her quirky style during the "American Woman: Fashioning a National Identity"-themed event.

One of Anne Hathaway's best red carpet moments took place at the 2013 Met Gala. The theme was "PUNK: Chaos to Couture" and Anne delivered, infusing just enough punk via her short platinum blonde 'do while rocking a sleek and stunning vintage Valentino number from 1992.

Surprisingly, Shailene Woodley wasn't the only one channeling Joan of Arc on the 2018 Met Gala red carpet, but her attempt was the most egregious. The star donned a Ralph Lauren creation (that reportedly took more than 50 hours to create) comprised of a metallic leather minidress meant to look like the icon's armor, plus over-the-knee boots. Paired with her bizarre hairstyle, this look landed Shailene on many worst dressed lists.

The theme for the 2016 Met Gala encouraged guests to wear futuristic looks and embrace fashion in the age of technology, and though Katy Perry tried to execute the theme in this black-and-gold Prada design, for most, only one thing came to mind: "Elvira, Mistress of the Dark"! The beehive hairdo and dramatic black lip ensured that fashion followers were focused more on the past pop culture icon than Katy's fashion future.

During the 2015 Met Gala, Zendaya donned a sun-emblazoned Fausto Puglisi dress with a structured skirt and a lengthy train. Fashion critics were divided over her look, which she topped off with a coordinating sun headband and matching cuff. Love it or hate it, there was no forgetting this ensemble!

In 2017, the theme was "Rei Kawakubo/Comme des Garçons: Art of the In-Between." Though Pharrell Williams' wife, Helen Lasichanh, turned heads in her on-theme ensemble, the bizarre Comme des Garçons look — a structured bright red jumpsuit paired with black open-toe flats — was puzzling even to the sartorially savvy crowd.

During the 2014 Met Gala, Katie Holmes wore a befuddling yellow Marchesa gown that drew comparisons to Belle from Disney's "Beauty and the Beast."

Sarah Jessica Parker won rave reviews for her interpretation of the 2013 Met Gala's punk theme when she hit the red carpet in this Giles Deacon gown that she topped off with a Mohawk-style headpiece by Philip Treacy.

Crazy in love with this 2012 Met Gala look? Many people were not. Beyonce rocked a sheer, curve-hugging Givenchy haute couture gown with a purple feather hemline by Riccardo Tisci during the "Schiaparelli and Prada: Impossible Conversations"-themed event, leaving fashion fans divided.

Gwyneth Paltrow risked a major wardrobe malfunction in a super-short Prada halter dress during the 2012 Met Gala. In addition to showing off her stems, the Oscar winner flaunted quite a bit of side-boob in the backless silver frock, which looked more like an apron than couture.

While we loved the cut and color of the Gucci gown that Jennifer Lopez wore to celebrate the 2011 Met Gala's "Alexander McQueen: Savage Beauty"-themed night, the floral shrug was overkill.

Though Karolina Kurkova's Viktor & Rolf gown emblazoned with "I Love You" caught the attention of fashion critics worldwide during the 2005 Met Gala's "20th Century: Chanel"-themed night, it didn't capture their hearts.

Madonna's Louis Vuitton look during the 2009 Met Gala raised eyebrows among fashion critics. In our eyes, she looked a little like an '80s prom queen who got struck by lightning!

Sorry, J.Lo fans! Like many of us, you'll never think of Jennifer Lopez's iconic Versace frock the same way again after seeing Donatella Versace in the exact same dress during the 1999 Met Gala…

It's not often that the men get in on the theme, but Chadwick Boseman aced the 2018 Met Gala's call for couture with a "Heavenly Bodies: Fashion and the Catholic Imagination" bent. He channeled an altar in custom Versace, donning this white embellished tuxedo with antique gold beading and a coordinating cape covered with jeweled crosses.

At the 2016 Met Gala, Claire Danes rocked a beautiful blue ballgown that might not have looked all that impressive at first — but the dress's hidden talent is what really stole the show: The gown lit up! The Zac Posen creation featured fiber optic lighting that gave a special futuristic glow to Claire's confection.

Gisele Bundchen may not have dressed the part for the 2008 Met Gala's "Superheroes: Fashion and Fantasy" theme, but she sure looked superb in this pink cut-out gown by Versace.

It's hard to believe that Celine Dion didn't grace her first Met Gala red carpet until 2017! Celine always likes to have fun in the fashion department, so it's no surprise she picked a polarizing number while adhering to the "Rei Kawakubo/Comme des Garcons: Art of the In-Between" theme. Her Versace gown featured a thigh-high slit, sharp edges and a bold headpiece to match, but unfortunately, the dramatic frock didn't earn her a spot on any best dressed lists.

One of our all-time favorite Met Gala looks is the layered fuchsia Christian Dior strapless gown that Cameron Diaz paired with turquoise jewelry during the "Poiret: King of Fashion"-themed event in 2007.

Shiver me timbers! During the 2006 Met Gala, which was themed "AngloMania: Tradition and Transgression in British Fashion," glam-rock pirate captain, er, designer John Galliano brought Charlize Theron as his date.

A puffer coat with a train? Leave it to Solange Knowles to rock this odd silhouette to honor the theme of "Rei Kawakubo/Comme des Garcons: Art of the In-Between" at the 2017 Met Gala. She finished off her Thom Browne ensemble, which also included a white button-down shirt and puffy pants, with a pair of oxfords that looked like they might be able to double as ice skates. She certainly stuck to the avant-garde theme… and was probably the most comfortable star on the red carpet all night!

Nun couture? That's what Eiza Gonzalez embraced at the 2018 Met Gala, adhering to the theme of "Heavenly Bodies: Fashion and the Catholic Imagination" with this Prabal Gurung number that seemingly drew inspiration from a nun's habit.

Amber Valletta nailed it in a Marie Antoinette-inspired ensemble during the 2004 Met Gala. She paired a Maggie Norris Couture corset with a John Galliano skirt — and a heck of a wig — to channel the evening's "Dangerous Liaisons" theme.

The Tommy Hilfiger frock that Gigi Hadid wore to the 2017 Met Gala might be her biggest fashion misstep to date. The bizarre creation featured an outlandish silhouette in a neutral hue that featured half of a tulle skirt on one side and a minidress on the other. Making matters worse? Those thigh-high fishnets. Yikes!

During the 2003 Met Gala's "Goddess: The Classical Mode"-themed night, Nicole Kidman wore a neutral one-shouldered gown by Tom Ford for Gucci. The designer reportedly had the actress's measurements and bust form on hand at his office, which is surprising considering the dress featured a major design flaw on the chest — namely, that it allowed the Oscar winner to spill out. 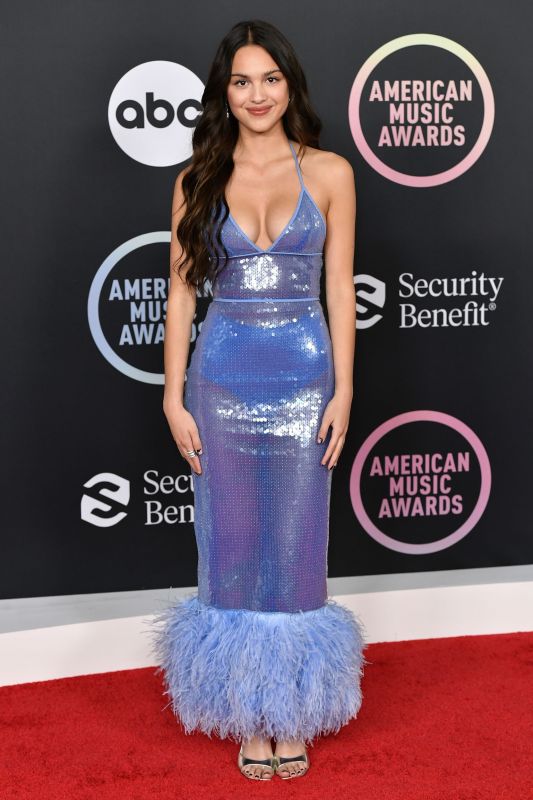 Up Next AMAs Red Carpet