Another week, another batch of romance updates! Ben McKenzie and Morena Baccarin are married! The "Gotham" co-stars quietly tied the knot on her 38th birthday, June 2, at the Brooklyn Botanical Gardens in New York, People reported, adding that it was an intimate ceremony for just a handful of family members and friends. The couple welcomed a daughter, Frances Laiz Setta Schenkkan, in March 2016. Morena is also a mom to Julius, 3, her son with her first husband, producer Austin Chick. Keep reading for more romance updates.

A year after secretly splitting with wife and co-star Christina, "Flip or Flop" star Tarek El Moussa says he's happily been dating and meeting people and is enjoying himself. "I've never really been single before, believe it or not, so it's a whole new life and I'm having a lot of fun," he told E! News on June 1. "I'm just a free spirit. I'm happy. I love going on dates. I like meeting girls. I'm just enjoying it." He also admitted that "to meet girls is a lot easier than it's ever been." After news of his and Christina's split was made public in December 2016, it was revealed that Tarek briefly dated their former nanny last fall, while Christina went on to date both a former contractor friend, Gary Anderson, as well as NHL player Nate Thompson. On June 7, it was revealed that Christina has moved on — again — with another new guy (who's actually an old guy). She's been seeing an Orange County businessman named Doug "for the last few weeks," a source told Us Weekly. An insider told "Entertainment Tonight" that Christina "dated [Doug] before her and Tarek were together." As for how she feels about Tarek's active love life? "Christina could care less," the source told Us.

Taylor Swift and Joe Alwyn have brought their romance Stateside. The music star and the English actor, who've quietly been dating for months, it was revealed in May, were spotted together on a Nashville balcony having what appeared to be morning coffee together on June 3. According to E! News, the low-key couple also spent time at Taylor's mom's house, where they gathered together with friends and family for a small dinner party on June 4. "Taylor and Joe headed back to her place later in the evening," a source told E!, which further shared that Taylor and Joe ordered delivery and invited a few pals over to hang out during their time in Nashville.

RELATED: What it's really like to date and break up with Taylor Swift

She's standing by her man! On June 7, Jennifer Lopez and Alex Rodriguez were spotted catching a flight to Las Vegas amid a report that one of A-Rod's exes is trying to extort him for $600K. Reports on TMZ claim that the woman was threatening to go public with text messages from their relationship in 2014 and trying to make it look like the messages were from the last few months. A-Rod is said to be looking at his legal options, with the support of his loving girlfriend, J.Lo. The same day, the National Enquirer published details of A-Rod's wild sex life with former lover Lauren Hunter, a fitness model whom he allegedly continued to contact via racy text message even after he got together with Jennifer earlier this year.

Mischa Barton has a new man. On the heels of her devastating revenge porn legal battle, Mischa has been seeing Australian model James Abercrombie. On June 6, Daily Mail Australia reported that the pair have been dating for the last few weeks and that that James is the son and heir of a former politician and businessman who's worth $574 million. James' modeling agency then confirmed the romance. "He was recently on a ski trip to Aspen, after which he headed to Los Angeles, where we are currently making appointments for him to seek representation," FRM Model Management director Stephen Bucknall told Daily Mail Australia. "James met Mischa at a party in Los Angeles just on a month ago. They then headed off on a small trip to France. He is now back in Los Angeles and they are spending a lot of time together."

Before she was cast as the star of "The Bachelorette," attorney Rachel Lindsay dated Golden State Warriors standout Kevin Durant, Us Weekly reported on June 1. The pair were a couple during their college years at the University of Texas at Austin. Kevin left after his freshman year and turned pro, where he was selected No. 2 overall in the NBA draft. Rachel went on to study law at Marquette University. "They broke up when she went to law school," a source told Us. "It was a pretty serious relationship."

"Arrow" star Katie Cassidy is engaged to marry Matthew Rodgers. She announced the news on Instagram on June 5. "I can't wait to spend forever with you my darling!! I'm the luckiest girl in the whole world. I ❤️ YOU to the moon and back @mattyice432 Thank you for a magical evening I will forever remember," she captioned a photo of them kissing while she's wearing her new rock. Katie later told E! News, "We were friends at first. He surprised me during a romantic dinner and dropped to a knee! It was so perfect!" The couple had been vacationing at the Oberoi Mauritius, a five-star hotel on an island in the Indian Ocean, following Katie's appearance alongside her "Arrow" co-stars at the Heroes and Villains Fan Fest in London.

Looks like one of the most infamous "The Bachelorette" villains has found love outside the franchise. Chad Johnson, known as the bad boy from JoJo Fletcher's season, has found a parter in model Zoe Baron. Chad confirmed during a June 6 "Entertainment Tonight" Facebook Live chat that after dating for a couple months, he and Zoe official became a couple two weeks ago. "On a scale of one to happy, I'm totally happy," Chad confessed.

Looks like Blac Chyna has moved on from Rob Kardashian. On June 5, she was photographed leaving the Argyle nightclub in Los Angeles with a new man by her side. When photographers asked if he was her beau, she confirmed it. "We're dating," she said. "We've been dating." Media outlets have since identified him as hairstylist Kellon Deryck. Kellon has appeared on Chyna's social media feeds in recent months, and they were seen holding hands in Miami in May. He's since posted images of her on Instagram himself. News of her new romance comes on the heels of reports that Rob had secretly been seeing reality star Mehgan James, which Rob has denied.

Actress-singer Laura Bell Bundy married Thom Hinkle, an executive at TBS, in California on June 3. Laura, who played Elle Woods in Broadway's "Legally Blonde" musical before launching a country music career, said "I do" in the infield at Santa Anita Park, a horse racetrack in Arcadia, California, People magazine reported. The bride wore a custom strapless lace Sherri Hill gown and a flower crown and shared exclusive photos with the magazine.

It appears that not only do Liza Weil and Charlie Weber know how to get away with murder, but also how to keep their romance a secret! The stars of the hit ABC show "How to Get Away with Murder" have been keeping a year-long relationship under wraps, JustJared.com reported on June 7. The site added that the pair grew close after both went through divorces in early 2016.

Amber Portwood may have put her wedding — originally set for this fall — on hold (again), but she and fiance Matt Baier have not called it quits, Us Weekly reported on June 2. "Matt and Amber are still together and still living together," a source said. "They're trying to work things out."

Wedding planning is underway! Jamie Bell is all about his upcoming wedding with Kate Mara — including the part where they hammer out every last nitty-gritty detail for the ceremony and reception. "I don't love planning," Kate told Jimmy Fallon on June 7 (via JustJared). "I like planning in my life in general, but wedding planning, I'm just not that interested. Like, 'What kind of spoon do you want on the table?' I'm just so uninterested, but Jamie is very interested. Like, I will say 'I don't care,' and he will immediately give a response of exactly the color, the shape," she said, looking somewhat confused. "He's the bride, yeah."

When "Teen Mom" alum Farrah Abraham plastered social media with images of a romantic, candlelit dinner, flowers and a heart drawn in the sand while in Jamaica on May 31 — where ex-boyfriend Simon Saran also happened to be — many fans concluded that they were not only back together but possibly engaged. Turns out it was just wishful thinking. "We're not together," Farrah told Us Weekly on June 3. "I think people just got confused by me celebrating my birthday also in Jamaica which, oh well, I had a romantic dinner! B—— were jealous!" She added, "We can be cordial and friends — it's because I keep it like that and that my daughter really wants that around."

On June 1, TMZ reported that "Workaholics" star Blake Anderson's wife, Rachael Finley, filed for divorce a week earlier citing "irreconcilable differences." The couple, who are parents to a 3-year-old daughter named Mars, married in 2012. TMZ added that they've been separated for at least six months. 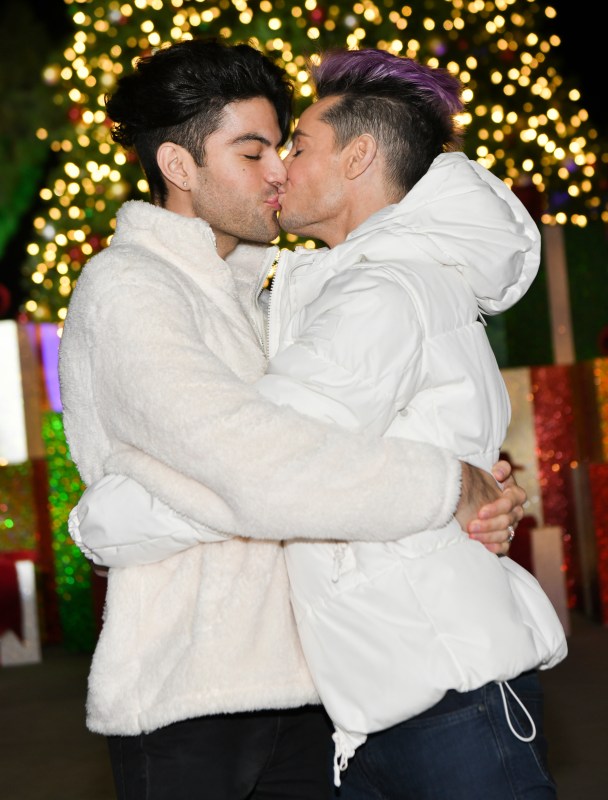