Surprise! Elizabeth Olsen appears to have quietly tied the knot with her longtime beau, Robbie Arnett. The "WandaVision" actress, 32, dropped a pretty explicit hint about the news while chatting with Kaley Cuoco for Variety's Actors On Actors series. During the video segment, Elizabeth explained at one point that she was actually in one of her bathrooms during their call. That tidbit lead her to notice an update to the room made by a certain someone fans thought was Elizabeth's fiance. "I've been in the U.K. for seven months, and I got back two days ago, and my neighbor is doing so much construction to their backyard. I can still hear it, and I'm in the furthest bathroom," she told Kaley. Elizabeth added, "I also just noticed that my husband put 'Little Miss Magic,' you know, the 'Little Miss' books? They're these classic books, but magic because of 'WandaVision,' because he's such a … cutie." Though she shared no other details, multiple outlets (and a whole lot of fans) have since reported that it was the first time she'd mentioned having a "husband" since she and Robbie, a musician in the indie pop band Milo Greene, reportedly got engaged in 2019.

If you've got it and you can't flaunt it … why not jump around on a trampoline in it? Like many parents during the coronavirus pandemic, Keira Knightley and her husband, musician James Righton, spent much of those first few months of lockdown trying to keep their kids happy, safe and entertained at home. Unlike those parents, however, Keira's work as an actress and as the face of Chanel's fragrances for the past 10 years have made her wardrobe a veritable designer dress-up playground. That apparently came in handy on the mom front. "We have a trampoline in our garden, and we decided we were only allowed to wear dresses on it," Keira recently told Harper's Bazaar U.K. of the game she invented for her daughters, Edie, 6, and Delilah, who's almost 2. "I put on red lipstick every day and every bit of Chanel that I have in my cupboard, and my daughter Edie had Chanel ribbons plaited into her hair and fairy wings," she recalled. Even dad followed the dress-up rule, although he would apparently opt for one of his "peacock-colored Gucci suits." "I thought, 'What is the point of these lovely things sitting in the wardrobe, when it feels quite apocalyptic and scary outside?' It felt so important to be really happy for the kids," Keira explained. She went on to share more family stories from her self-described "weird" pandemic experience. "When you're in a scenario like this, and you know there's nothing you can do but stay at home, you realize the utter frivolousness of your existence …," she later added.

Jennifer Lopez inks multi-year deal with Netflix; is a move to L.A. next?

Jennifer Lopez spent much of 2019 on tour prior to the pandemic shutdowns of 2020. Now, as the U.S. begins to reopen, the singer, actress and producer is putting her movies and TV hat back on in the form of a multi-year, first-look deal with Netflix. Jennifer, 51, and her production company, Nuyorican Productions, are slated to develop feature films, TV series and unscripted content "with an emphasis on projects that support diverse female actors, writers and filmmakers," according to a press release (via Deadline). The first two projects under the deal are "The Mother," which stars Jennifer in a role Netflix describes as, "a deadly female assassin who comes out of hiding to teach her daughter how to survive." The second is "The Cipher." Based on a novel by Isabella Maldonado, the project sees J.Lo as an FBI agent tracking a serial killer whose trap she escaped at age 16. In the past two years, Netflix has gradually built a larger presence in Los Angeles, where the company maintains a large footprint including offices and multiple sound stages. And while seemingly on-again couple J.Lo and Ben Affleck sure look like they'd love to be based in the same city lately, the Netflix deal could explain why Jennifer, who shares 13-year-old twins with ex, Mark Anthony, was recently spotted touring schools in the Los Angeles area.

Kanye West's estranged wife and in-laws took time out to celebrate the rapper and designer's 44th birthday on June 8, in spite of his ongoing divorce from Kim Kardashian West. In fact, Kim — who filed for divorce from Kanye in February after nearly seven years of marriage — paid tribute to the father of her four kids multiple times over the course of the day. "Happy Birthday Love U for Life!" she captioned a photo of her and Kanye with their daughters North and Chicago, and son, Saint, on Instagram. On her Instagram Story, Kim posted a throwback pic of her soon-to-be ex-husband, along with photos of the two with and without their kids (per Uproxx). Kim's sister, Khloe Kardashian cheered for Kanye, too, writing "Happy birthday to my brother for life!!!" alongside a photo of him with Kim, Khloe and Tristan Thompson. "Have the best birthday Ye! Sending you love and endless blessings!!" she added. Kim and Khloe's mom chimed in, to, sharing yet another pic and the caption, "Happy Birthday #kanyewest!!" Kim and Kanye's split was the focus of the last "Keeping Up With the Kardashians" episode, a fact Kim has reportedly struggled with reliving as the story unfolds on the family's show.

After a tumultuous and controversy-scarred few months, Chris Harrison confirmed on June 8 that he's exiting "The Bachelor" franchise. "I've had a truly incredible run as host of The Bachelor franchise and now I'm excited to start a new chapter," he shared on Instagram. "I'm so grateful to Bachelor Nation for all of the memories we've made together. While my two-decade journey is wrapping up, the friendships I've made will last a lifetime." His departure, which stunned Bachelor Nation alums, followed what he said he hoped would be a hiatus during which time he planned to educate himself more about racism and the Black experience in America. Earlier this year, Chris was widely condemned for defending Rachael Kirkconnell while discussing racist social media posts she'd shared in 2018. Chris was the original host of "The Bachelor" and its offshoots since the franchise launched in 2002.

Ellie Kemper's friend and "Unbreakable Kimmy Schmidt" co-star Tituss Burgess is showing his support for the actress after she apologized publicly for participating in a controversial pageant ball in her Missouri hometown. Ellie, 41, shared a statement on Instagram on June 7, explaining that she was unaware of the "racist, sexist and elitist past" of the Veiled Prophet Ball prior to being crowned its queen in 1999. "I was old enough to have educated myself before getting involved," she said, in part, adding that she denounces white supremacy, among other things. Tituss, 42, reposted the apology on his own Instagram, writing, "I love my Ellie ❤️, Oh, & P.S. Next time, just ask me, I'll tell ya what to do 🥰." Asked how Ellie was doing since addressing the backlash she faced, Tituss told Page Six Ellie was well. "We're going to leave it at that," he said. "My Ellie is doing wonderful. Ellie's great."

When Season 1 "Bridgerton" star Rege-Jean Page hosted "Saturday Night Live" earlier this year, he hilariously spoofed the Duke of Hastings and Daphne Bridgerton's wedding night scene, murmuring the words, "I burn for you," at one point. But that was actually something Daphne (played by Phoebe Dynevor), not Simon, said on the show. And during Variety's Making a Scene series on June 7, Rege implored fans to stop attributing the line to him. "No. This is an injustice that needs to be put right! I do not say, 'I burn for you.' It's not my line!" he joked, adding, "Everyone clearly was feeling very burned for, which I'll take as a compliment." Phoebe then chimed in with her take on the sexy line, which she said while sounding like her voice might break. "You have no idea what lines people are going to care about," she explained. "That was surprising to me. It wasn't like I saw 'I burn for you' in the script and was like, 'This is what people are going to talk about. The key to dialogue like that is just to make it as organic and as real as possible. There's no other way to play saying a line like that than to make it an inward feeling." Rege announced in April that he won't be back for Season 2 of the addictively campy Shondaland romance, breaking the hearts of viewers who'd fallen just as in love with Daphne and Simon's romance as Daphne and Simon had fallen for one another. "I think he'll definitely be referred to a lot. I think we'll see the baby," Phoebe recently told The Wrap when asked about Simon and Season 2.

Kim Kardashian West's security team has reportedly intercepted a suspicious (read: creepy) package containing a diamond ring and a box of Plan B that was addressed to the reality star and SKIMS founder. TMZ reports Kim's security found the package on June 3. They believe the sender is the same man who showed up at Kim's home in February and again a few weeks ago. The first time, he reportedly said he wanted to see her. The second time, he said he was picking her up for dinner, according to the outlet. Though his social media accounts are no longer active, he's said to have posted about Kim a number of times, including sharing something that said, "Queen Kimberly" is "sitting up in thy big castle alone waiting for her Knight in Shining Armor." Kim's lawyers are expected to file a restraining order against him in the near future

Turns out the ring actress Grace Gummer was spotted wearing last month was, indeed, of the engagement variety. On this week's edition of Mark Ronson's "The FADER Uncovered" podcast, the Grammy-winning musician, producer and songwriter confirmed he and Grace, whose mom is Meryl Streep, are planning to tie the knot. Grace, 35, and Mark, 45, were first linked romantically after being together in the fall of 2020. "I got engaged last weekend," Mark told Kevin Parker of Tame Impala on his June 7 show, recalling that he and Grace were listening to a Tame Impala song when they shared their first kiss. "There's a plaque for that somewhere. There's a first kiss, very corny Hallmark first kiss plaque," he joked. Mark, whose sisters are the DJ Samantha Ronson and designer Charlotte Ronson, was previously married to rench actress Joséphine de La Baume and briefly engaged to Rashida Jones, while Grace was previously married to "Nomadland" actor and Dawes aum Tay Strathairn, whose dad is David Strathairn. 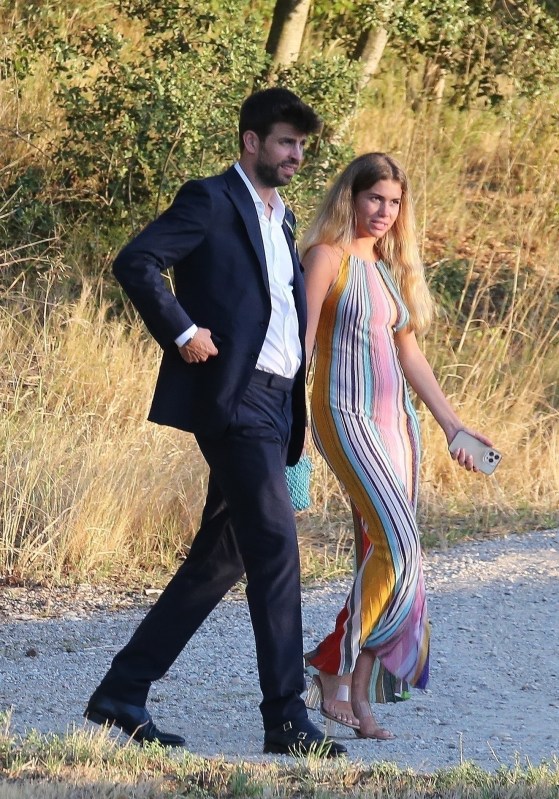